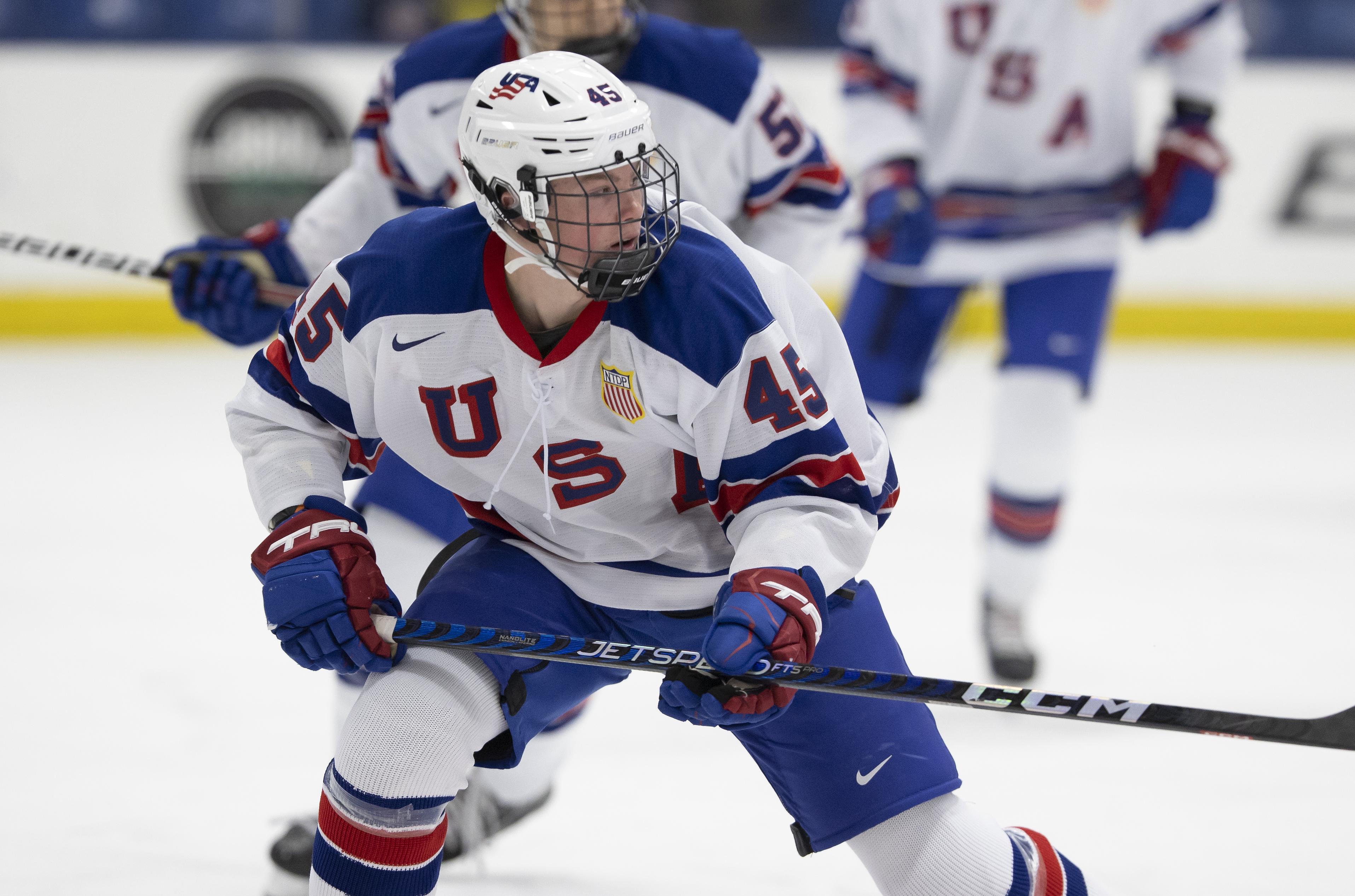 YOUNGSTOWN, Ohio – The U.S. National Under-17 Team tied the game up late in the third but the Phantoms broke through and won, 5-4, Saturday night inside the Covelli Centre. Cole Eiserman (Newburyport, Mass.) bumped his season goal total to 33, while adding an assist, and Sam Laurila (Moorhead, Minn.) tallied his first NTDP goal.

It was a quick start to the game as the Phantoms got on the board, 1:25 in, after Brandon Svoboda cleaned up a loose puck in front

It wasn’t long before Team USA answered, however, as Laurila netted the equalizer, his first of the season, :14 seconds later. Eiserman collected the puck at the blue line from Kamil Bednarik (Elmhurst, Ill.) with Laurila rushing by his side. After a few stick handles, Eiserman sauced it over to him where he had an open net to work with and utilized it for the score.

At the 14 minute mark, Kristian Epperson (Mequon, Wis.) skated along on a breakaway while shorthanded and was hooked, setting up for a penalty shot. Epperson nearly beat Youngstown netminder Jacob Fowler, but it was blocked away as the game remained tied.

Youngstown grabbed one more before the period buzzer rang off a rebound shot from forward Matt Perkins.

The second period was quiet for the majority, that was until Eiserman netted a power-play goal for his team-leading 32nd tally of the season. Will Skahan (Woodbury, Minn.) possessed the puck up at blue line and passed it diagonally to Cole Hutson (Barrington, Ill.). Hutson faked a pass back and sent it to the opposing face-off dot for Eiserman who dropped to a knee and hammered a blast into the back of the net to make the game square at two.

Youngstown regained the lead in the closing minutes of the second to take a lead into the third.

The Phantoms put the pressure on and made it a two-goal game with 10 minutes to go in the third.

Team USA made a late charge and cut the lead back down to one with 6:22 to play after a tally from Charlie Pardue (Winnetka, Ill.). Brodie Ziemer (Hutchinson, Minn.) controlled the puck and generated a two-on-one with Pardue on the wing. A cross-ice pass was rocketed across the goal line to make a comeback more feasible.

A Youngstown penalty in the final 1:30 brought an offensive-zone faceoff for Team USA. With their net empty, James Hagens (Hauppauge, N.Y.) won the draw and snapped it back to Max Plante (Hermantown, Minn.). Plante found Eiserman who tee’d up a blast from the dot to tie things up.

However, Youngstown netted the game winner with :19 seconds left to take the win.

The Under-17 Team returns to USA Hockey Arena next weekend for the first time in 2023 for a weekend series against the Green Bay Gamblers. The game can be streamed free on USA Hockey TV. For tickets, visit the USA Hockey Arena box office, call 734-453-8400 or click here.