MEDICINE HAT, Alta. - The U.S. National Under-17 Team fell to Canada Black, 5-4 today (Nov. 5) in overtime in its final preliminary-round game at the World Under-17 Hockey Challenge.

“It was a tough loss losing the late lead,” head coach John Wroblewski said. “We should gain a lot of confidence though with our ability to play three games in three days which we’ll need to do in the medal round here. We learned some items today that we’re going to carry forward with us.”

Canada Black took the first lead of the game at the 4:28 mark after netting a breakaway goal.

Jack Devine (Glencoe, Ill.) answered for the U.S. at 9:57 of the first. Devine was waiting in the slot where Ryan St. Louis (Riverside, Conn.) sent him the puck and he wristed it past Canada Black’s Benjamin Gaudreau.

Canada Black regained its one-goal lead at the 1:50 mark of the second period before St. Louis evened it, 2-2.

St. Louis tapped in Sasha Pastujov’s (Bradenton, Fla.) shot at 15:27 at the left side of the goal mouth. Sean Behrens (Barrington, Ill.) picked the secondary assist.

Dylan Duke (Strongsville, Ohio) gave the U.S. a brief 3-2 lead after collecting the rebound from another Pastujov shot. Roman Schmidt (Midland, Mich.) picked up the secondary assist on the goal.

Canada Black came back to tie the game, 3-3 with 40-seconds left in the middle frame.

The U.S. took a 4-3 lead when Wilmer sent a no-look pass to Jack Hughes (Westwood, Mass.) and he ripped it into the top corner.

After a penalty was called on Team USA, Canada Black evened the game on the power play, and with an empty net, to send the game to overtime. 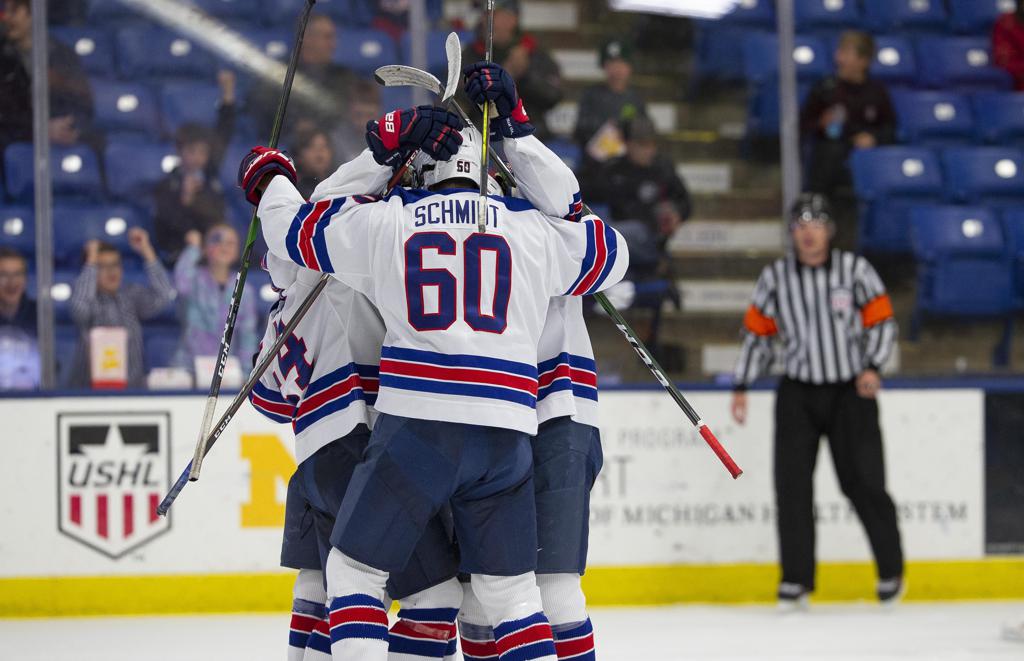