The U18s wrap NCAA schedule with Saturday (Jan. 12) road matchup against the University of Wisconsin 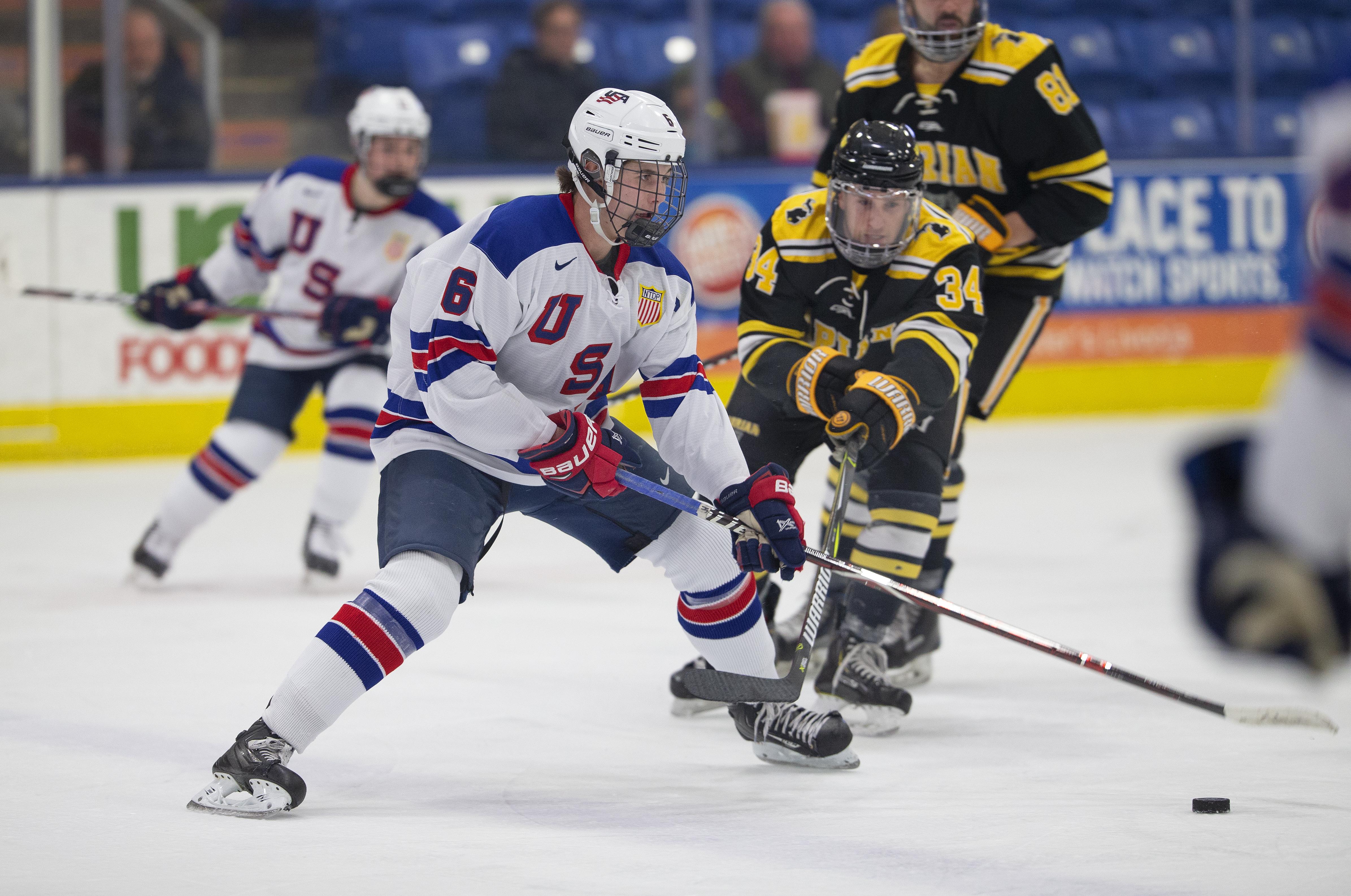 PLYMOUTH, Mich. -- Alex Turcotte (Island Lake, Ill.) and Matthew Boldy (Millis, Mass.) each recorded a goal and three assists while five other U18s scored in the 8-3 win against the Adrian Bulldogs on Tuesday, Jan. 8 at USA Hockey Arena.

Marshall Warren (Laurel Hollow, N.Y.) struck first for the U18s at 2:04 of the first frame when he weaved past Adrian forward Bryce Van Horn to take a shot from between the circles. Ryder Rolston (Birmingham, Mich.) and Sean Farrell (Hopkinton, Mass.) tallied assists.

Adrian forward Rex Moe put the Bulldogs on the board at 5:04 of the first period with a backhand shot off of a pass from Dino Balsamo.

Fifty-four seconds later, the Bulldogs tied the game at two apiece with a goal from Bryan Yim, assisted by Connor Armour and Trevor Boyd, ending the period with a score of 2-2.

At 5:03 into the second frame, Boldy scored a power-play goal from the slot, capitalizing off of a pass from Turcotte to put Team USA ahead 3-2. Domenick Fensore (Thornwood, N.Y.) also assisted on the goal.

With 9:34 remaining in the second period, Team USA took a three-goal lead when Turcotte snagged the puck from in front of the net, sending it past goaltender Nikita Babintsev’s glove.

Spencer Knight (Darien, Conn.) made 10 saves through the middle frame, including a stop on Trevor Boyd’s breakaway opportunity with 1:46 to go.

Henry Thrun (Southborough, Mass.) opened third-period scoring at 1:16, and tallied Team USA’s second power-play goal of the game, with a quick shot from the right circle.

Michael Gildon (Plano, Texas) extended the U18’s lead to 7-2 with 8:09 left in the third period, scoring shorthanded and unassisted after stealing the puck from Babintsev.

Adrian cut the U18s lead to 7-3 with 6:52 remaining with a power-play goal from Dino Balsamo, assisted by Yim and Van Horn.

Hughes caught a behind-the-back pass from Trevor Zegras (Bedford, N.Y.) and went forehand-backhand to score his second goal of the game with 1:46 remaining in the final frame, sealing the U18’s 8-3 victory.

Knight made 28 saves and played a full game in net for Team USA.

The U.S. Under-18 Team plays next on Saturday, Jan. 12 at 8 p.m. ET against the University of Wisconsin at the Kohl Center to wrap up its NCAA schedule. The U18s return to USA Hockey Arena for a 7 p.m. ET matchup against the Youngstown Phantoms on Tuesday, Jan. 15.

Tickets for all home games are available for purchase at USAHockeyNTDP.com/Tix.