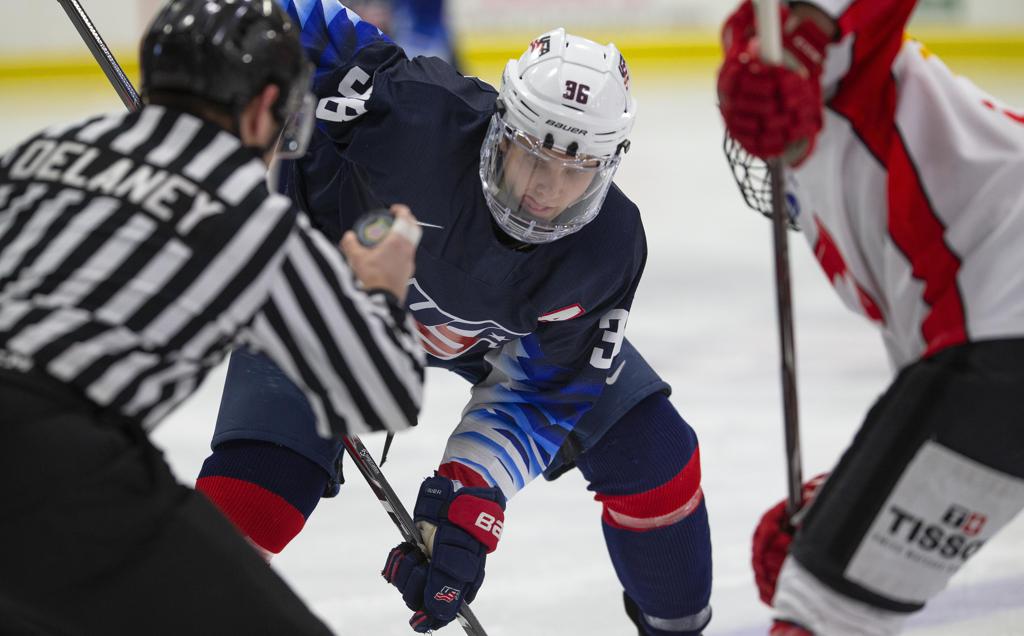 The 2018 Under-17 Four Nations Cup continues Friday (Dec. 14) with a matchup between Slovakia and Switzerland. Faceoff is set for 3:30 p.m. ET at USA Hockey Arena.

The back half of Wednesday's slate features a matchup between Team USA and Russia at 7 p.m. ET at USA Hockey Arena.

Seeding for the first- and third-place games have been determined for Saturday (Dec. 15), with Slovakia and Switzerland facing off for third place at 3:30 p.m. ET and USA battling Russia in the championship game at 7 p.m.  ET.

Switzerland and Slovakia will look to secure their first points of the 2018 Under-17 Four Nations Cup when they meet in the early game Friday afternoon at USA Hockey Arena.

Switzerland has been outscored by a 12-2 margin across its first two games, which included a 3-1 loss to Team USA on Wednesday night. Stefano Bottini scored the lone goal for the Swiss side and goaltender Loïc Galley stopped 39 shots in an impressive performance.

Fabian Ritzmann earned Player of the Game honors for Switzerland in the loss.

Slovakia suffered a 6-1 loss to Russia despite a 36-save performance from Šimon Latkóczy.

The Slovaks were held off the scoreboard until the final two minutes of the contest when Oleksiy Myklukha tallied his second goal of the Four Nations Cup on a 5-on-3 advantage.

Latkóczy's strong showing in net earned him Player of the Game honors.

The U.S. Men's National Under-17 Team will square off against Russia in Friday's nightcap as a prelude to Saturday's first-place contest.

Team USA secured its second victory of the Four Nations Cup with a 3-1 win over Switzerland.

Daniyal Dzhaniyev (Brooklyn, N.Y.) found the back of the net 3 minutes, 12 seconds into the opening frame to put the U17s on the board. Jacob Truscott (Fort Gratiot, Mich.) later broke a second-period tie when he corraled a centering feed from Chase Yoder (Fairview, Texas) and finished an odd-man rush.

Meanwhile, Russia flexed its muscles against Slovakia in a 6-1 victory. Six different players recorded goals for the Russians, including four in the second frame.

Pavel Tyutnev added a short-handed goal to extend Russia's lead to 6-0 before Slovakia pulled one back in the final two minutes of regulation to break the shutout bid.

Semyon Sharabain collected his first win in net for Russia in a 12-save performance.