The NTDP is a Family Affair For Landon Slaggert

The Under-17 forward grew up admiring the NTDP 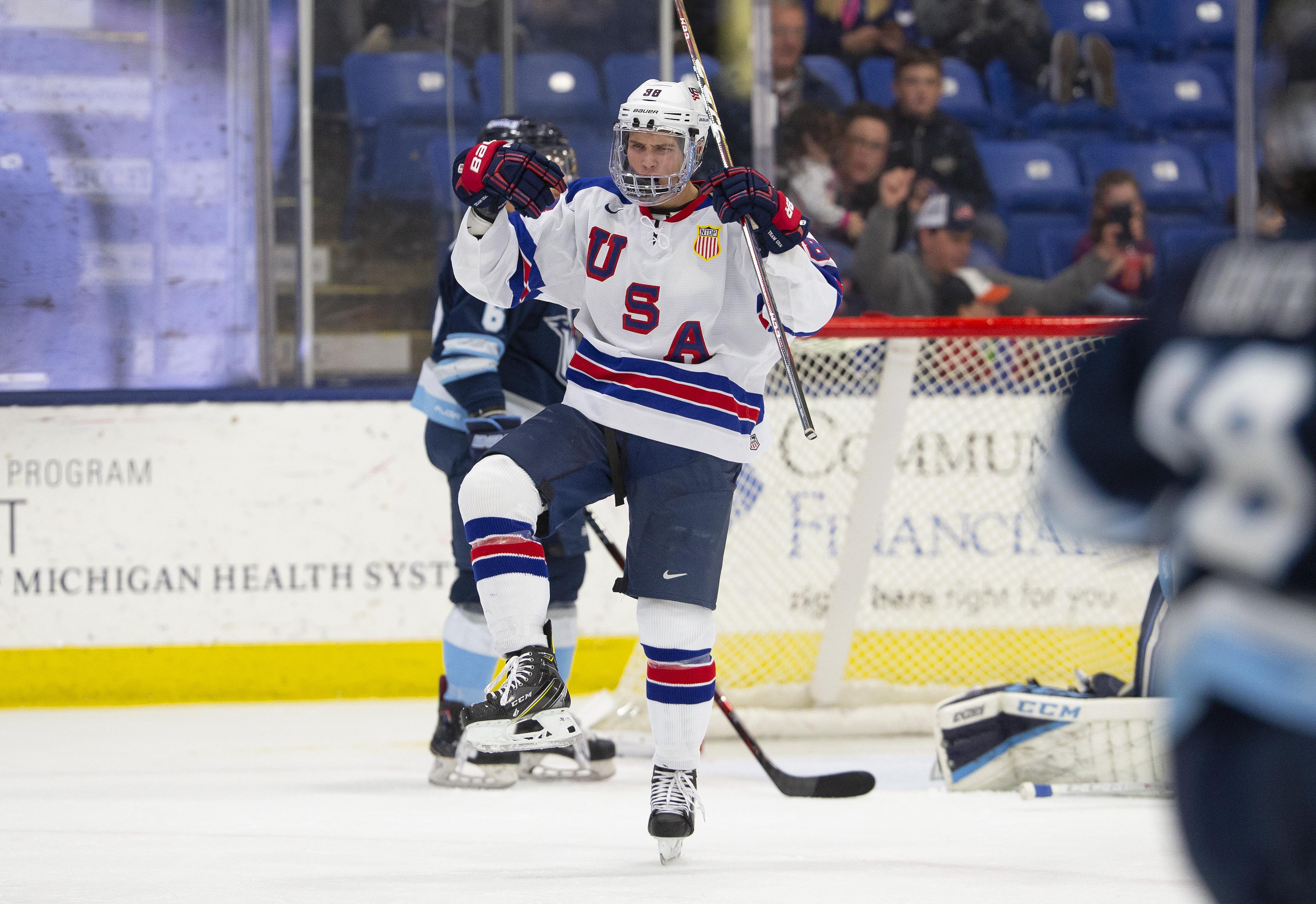 For Landon Slaggert, all it took was a trip with his dad Andy to watch USA Hockey’s National Team Development Program in action and he was hooked. It might have been the elite players or the red, white and blue jerseys but either way, he knew it was something special.

“I remember coming up to a game when I was 5 years old with my dad to watch [former NTDP player and current NHL defenseman] Ian Cole,” Slaggert said. “I just remember watching the USA players on the ice. It was really cool and so special to see the players and team.”

Slaggert started his hockey career when he was just 3 years old.

“I grew up around the rink as my dad is an assistant hockey coach at the University of Notre Dame,” he said. “For as long as I can remember, my dad would always make sure that I was around the players and locker room.

“I grew up around the program and the guys were my heroes. I got to watch them and get to know them as people. They really gave me a goal to achieve.”

The South Bend, Indiana, native did have one favorite childhood idol when he was growing up.

“My favorite Irish player growing up was Anders Lee,” said Slaggert. “I just respected him so much, both as a person and a hockey player. He is now the captain of the New York Islanders. He is just a great guy and all-around good person.

“He would take time off the ice and ask me questions. I got to know him as he would come to our house sometimes for BBQ. He would play with me and take time to answer all my questions.”

Of course, with his dad coaching, Slaggert’s mom Tara was the one that had to cart Landon and his brothers, Graham and Carter, to practices and games. She might have been the superhero in the family.

“She did so much for us,” said Slaggert. “She was the one that put in the hours in the car. She would have to drive us two hours to practice and often times we wouldn’t get home until midnight. She was always the driving force for us and would take time out of her day to make sure we were set. We all played for the [Chicago] Mission but on different teams. It seemed she was always shuttling around kids.”

Get to Know Landon

Trade Places With For a Day
Seth Appert

“He told me it would be a grind and it will be tough, but you will have to battle through. You need to make the most of your opportunity to play for this team,” Landon said. “We would come over when we could over the two years to see him play. I just remember how special it was to see the USA jerseys.”

The 5-foot-11, 170-pound forward has realized some important lessons on his own about the transition to the NTDP.

“It was nothing too hard and I think the sleep part was even better since I’m really close to the rink,” he stated. “The hardest thing was trying to balance the academics and school. It’s all about time management.”

It should be no surprise when Slaggert earned an opportunity to play for the NTDP, he was very quick to jump on it.

“My brother [Graham] told me to go for it, if I earned a spot,” he said. “It is highly respected, and the development is second to none. I did my research and realized how much the program will help me.”

I grew up around the program and the guys were my heroes. I got to watch them and get to know them as people. They really gave me a goal to achieve.

It also helped that Graham played for the NTDP for two seasons (2015-17), so he could give his middle brother some inside knowledge of what to expect.

Slaggert is getting excited to showcase the Under-17s as USA Hockey Arena will host the 2018 Four Nations from Dec. 11-15. The tournament will feature Russia, Slovakia and Switzerland in addition to Team USA. Slaggert and his teammates are looking forward to having a home crowd to boost them as they aim to play in the first-place game on Dec. 15.

Slaggert understands that the U17s can take away some important lessons from their first international tournament — the U17 World Challenge earlier this month — and apply this knowledge to the Four Nations.

“It was a good experience for us to get our foot in the door in international play,” he stated. “I think we learned that you can’t take any games off and you need to be ready. When we play our game, it really helps us.

“It’s always special to play internationally and it’s something that we work each day. We will give it our all to earn the right to play for a championship.” 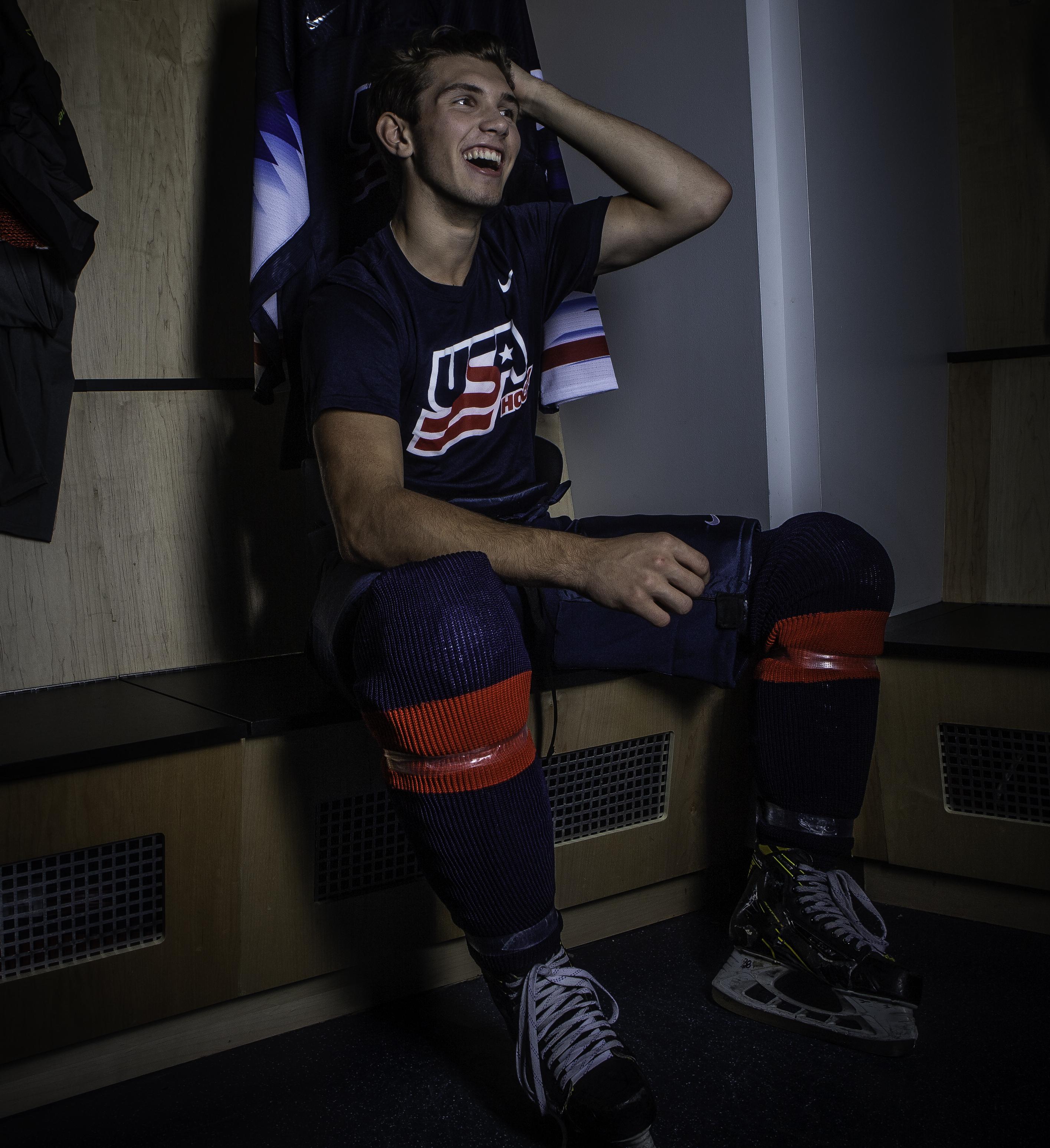 “Going into an international tournament, you have to play hard. One of the things we learned and something that coach stresses is that we have to take it day-by-day. We need to focus on each day, whether it is practice or in a drill.”

This only highlights how much it means to Slaggert to be able to wear the USA jersey. It was something that he had looked forward to almost his entire life.

“There is no way to describe it,” he stated. “It is such an amazing feeling to wear the jersey; it really sends chills through me. It is something so special.

“The first time a group of us walked into the locker room and saw the jerseys, it really gave us chills. It makes you realize you are ready to fight for your country and give it your all.”