Eamon Powell Credits His Brothers for His Competitive Side

Competing at a high level nothing new for NTDP blueliner 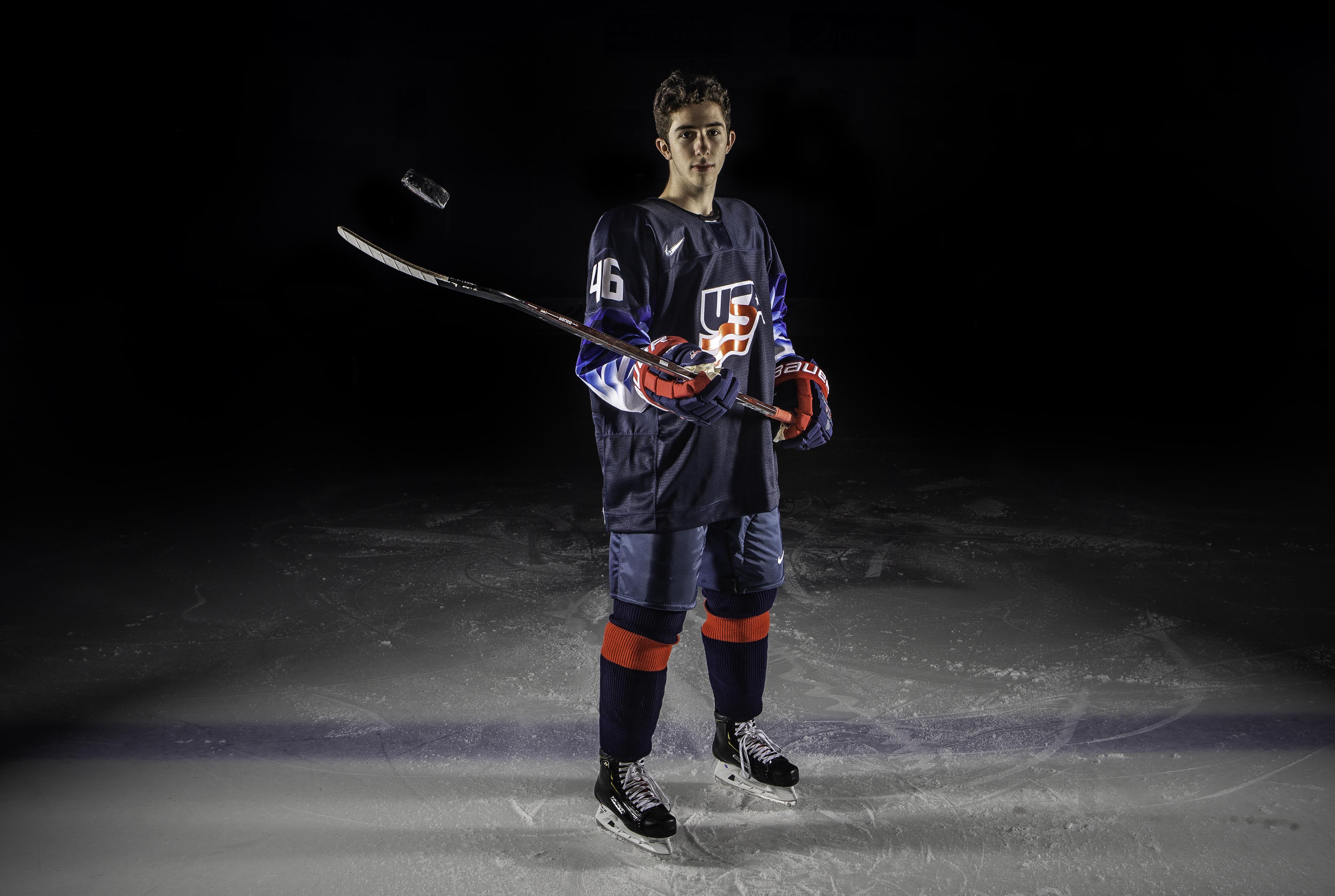 When you grow up with two hockey-playing brothers, it’s hard not to be competitive. It’s something that Eamon Powell thrives on each and every day when it comes to playing the sport that he loves.

“We were always competing when we were growing up back home, especially in street hockey,” said Powell. “We were definitely competitive in anything we did. We always had to beat each other to have bragging rights. Unfortunately, my older brother [Emmet] mostly won and I would win sometimes. My younger brother [Seamus] wouldn’t win at all.”

For Powell, he started skating when he was 3 years old and just fell in love with the game from there.

“My older brother and I would go to the rink for open skate every Friday with my dad and grandpa. Someone told my dad about a learn-to-play program and hockey kind of just grew from there,” the Marcellus, New York, native said.

Powell says that he has pretty much always been a defenseman, something that apparently runs in the family.

“I started when I was young,” he explained. “I was a good skater from the start. I could skate backwards, so I got put back there and it just stuck. I really love it especially since I can skate and still jump into the rush. I love the feeling of being back there.

It should be no surprise that his favorite player growing up was Chicago Blackhawks defenseman Duncan Keith.

“He was my favorite player growing up and someone I model my game after,” said Powell. “I really liked how he plays the game, how he uses his body and his skating on defense. He runs the power play and I like to see myself in that same role. He is on the smaller side and has good skill in his game.”

After playing for the Rochester Coalition 15U squad last year, Powell jumped at the opportunity to play for USA Hockey’s National Team Development Program to help grow his game. It was a tough adjustment for him at first.

Get to Know Eamon

The one thing people don't know about me is...
I like to fish and spend time at my family camp on Otisco Lake

“It was a huge jump to the NTDP after playing midgets last year,” the 5-foot-11, 155-pounder said. “The teams we are playing are older, faster and stronger but it’s good for our development. It’s really giving a challenge for us and we are starting to adjust.”

It should be no surprise that his love of competition helps fuel his passion for the sport and helped him with the transition to Plymouth.

“I have never felt so close with 22 other guys like I have with the NTDP,” said Powell. “It’s a brotherhood. We really want to go out and play for each other. I love the competitiveness that this team has.”

That competitiveness is going to come in handy when the U17s host the 2018 Four Nations at USA Hockey Arena. The event, which runs from Dec. 11-15, also features Russia, Slovakia and Switzerland. Powell understands that it will be the little things Team USA needs to do in order to play in the first-place game on Dec. 15.

I have never felt so close with 22 other guys like I have with the NTDP. It’s a brotherhood. We really want to go out and play for each other.

Powell remarked on the unique opportunity the U17s have to play international competition.

“It’s going to be very special to play at home and have my family and friends there to support me. It’s a unique experience and something that I will always remember,” said Powell.

There is also some extra motivation for the squad after a disappointing showing at the Under-17 World Challenge. Powell knows that they can take away some valuable lessons from that event and apply it to the Four Nations.

“How hard you have to work every day if you want to be the best,” he said on the most important takeaway. “It makes you realize that you give it your all every day on the ice or in the weight room. Every day, we are working on our chemistry. It’s something very unique about our team that we are together every day and we have to use that to our advantage.” 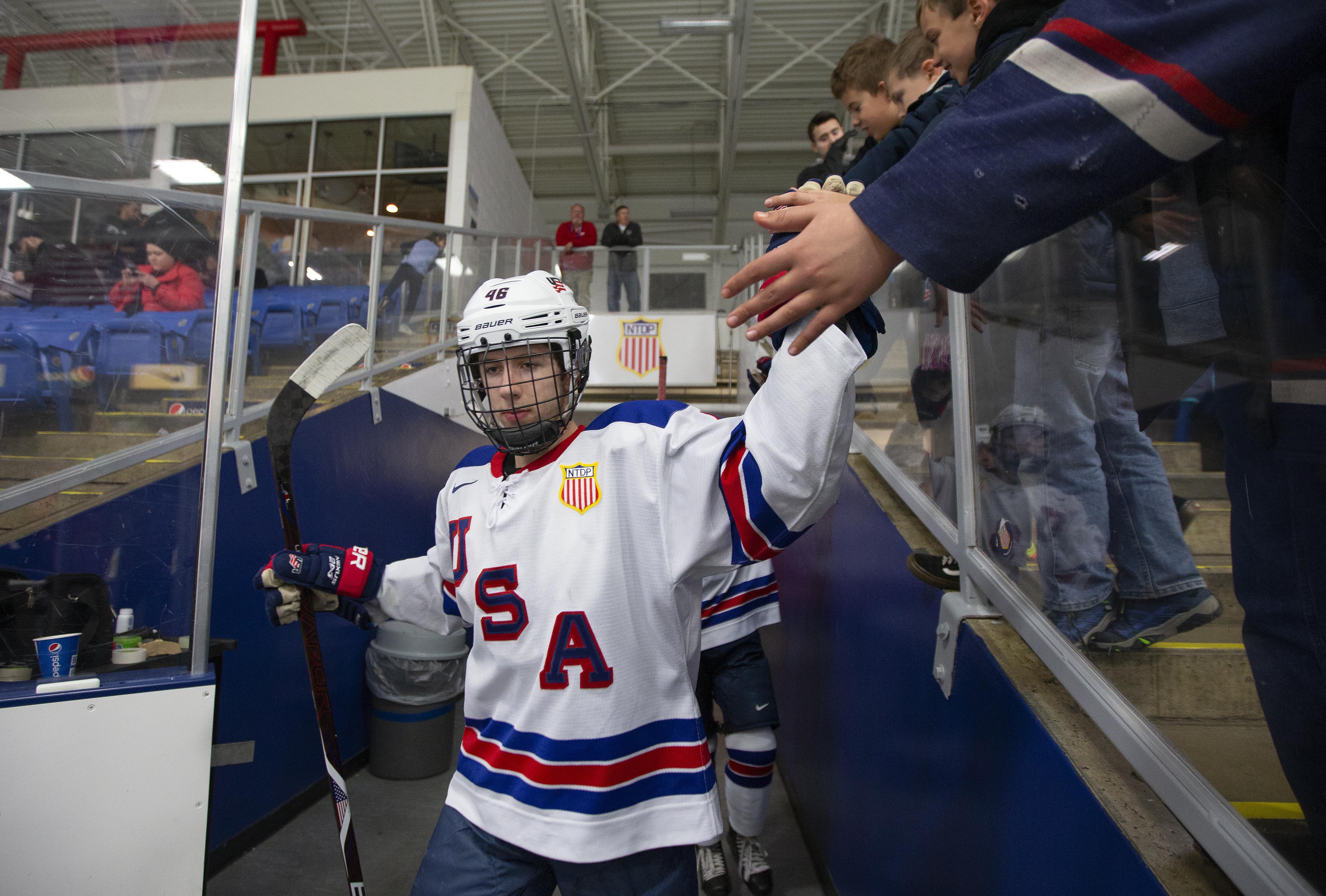 One thing will never change for him and that is just how special it is to wear the colors of his country.

“It the most special feeling to have those three letters across your chest each day whether it is in practice or on the jersey,” said Powell. “Words just cannot describe it. All the guys will tell you that.

“I think I was star struck the first time I saw my jersey hanging in the locker room with the USA crest on the chest and my name on the back. It was something that I have worked hard for and it was a dream of mine to put on the USA jersey.”

Powell can only thank his brothers for helping drive his competitive side to help him reach his goal.