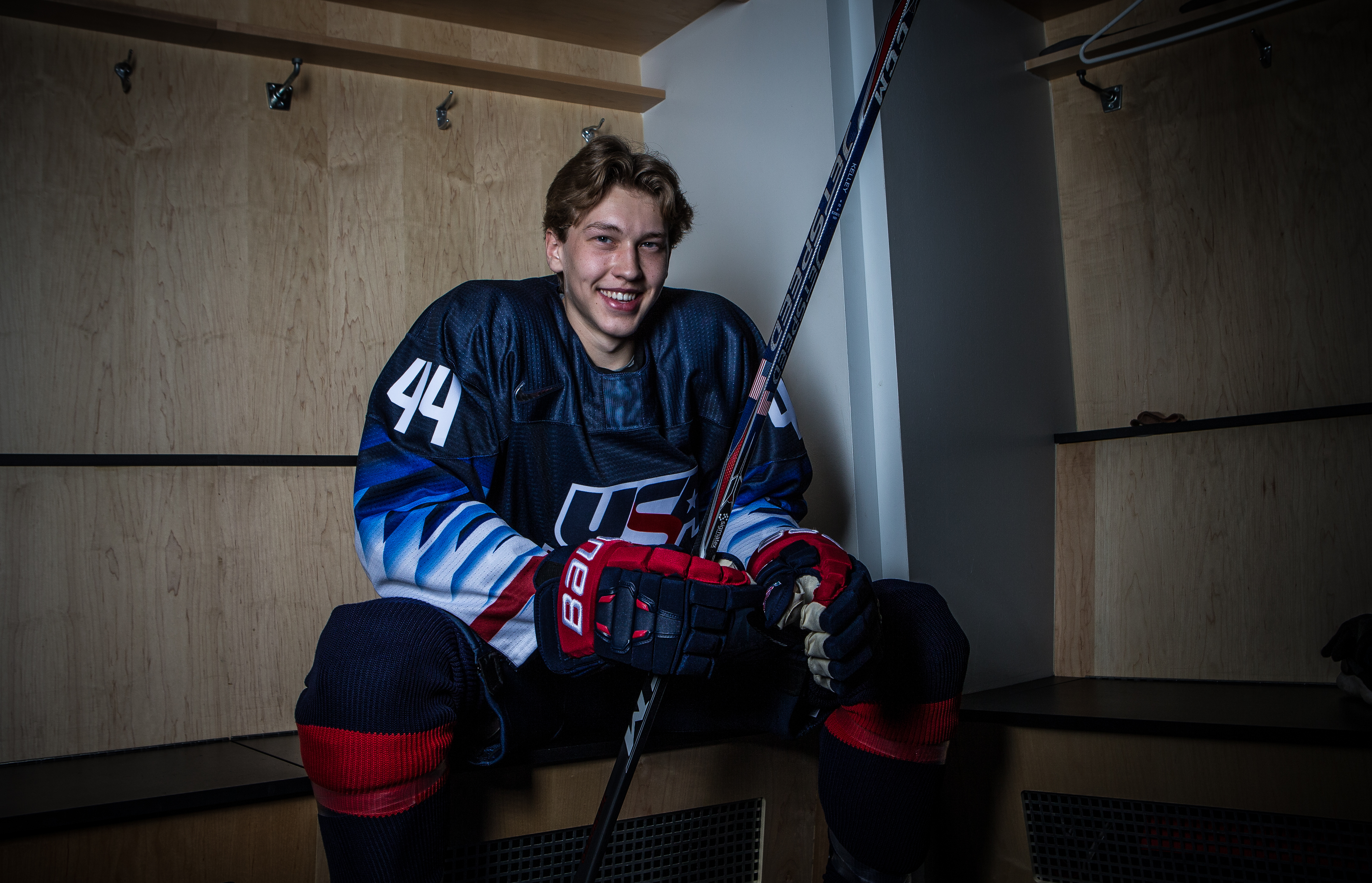 Growing up in Maple Grove, Minnesota, there is a two-word term of endearment that fits Connor Kelley perfectly and that is “rink rat.” And he can thank his older brothers for that.

“I started playing hockey when I was three years old,” he explained. “My dad and brothers played so I was just always into the sport. I think I was a rink rat as I was always at the rink and at their games.

“I just loved the competition of hockey. There is something about it as you move up, you get to meet more and more players.”

For Kelley, now a blueliner with the USA Hockey National Team Development Program Under-17 Team, it was an easy decision to become a defenseman. Once again, his brothers played a part in that.

“I started out as a forward,” he explained. “My oldest brother played both forward and defense. Justin was always a forward and I wanted to be just like him. My dad and other people thought that I would be a better D so I went ahead and made the switch when I was 8 years old.”

His middle brother Justin, who is three grade levels above him, is currently playing junior hockey for the Minot Minotauros in the North American Hockey League.

“Justin has had a huge influence on me,” said Connor. “When we were growing up, there was a rink we would go to in Maple Grove and I would get to participate in his 3-on-3 practices. We would always go out and I would get to hang out with him and his teammates and participate. I learned so much from him and that experience.”

Plus, Connor always tried to wear the same number as Justin, especially when he was younger.

“Justin wore No. 28 when he was younger and I wore No. 28 because that was my favorite number. I’m currently wearing No. 48 now because [former NTDP standout] Charlie McAvoy is my favorite player,” he said.

Meanwhile, older brother Matt also has always been a huge influence for Connor.

“Matt played high school hockey, but he ended up playing college soccer at the University of Wisconsin-Superior,” explained Connor, who is 10 years younger than Matt. “I used to play soccer too when I was growing up so that is something that we have in common but in the end, hockey won out for me.

Get to Know Connor

Favorite activity away from the rink
Playing basketball with friends

“Right now, he is my trainer and that is what he went to school to do. He makes sure that I am staying healthy, eating right and training right.”

It should be no surprise that Matt was able to offer his youngest sibling plenty of advice before he joined the NTDP in late August. It was a simple piece of knowledge that he has taken to heart.

“He told me not to worry about the physicality of the transition; rather, he told me to work hard every day and to challenge myself. It’s going to be difficult at times but if I do things right, then it will help me at the end,” Connor said.

Kelley is looking forward to the U17 team’s first home series at USA Hockey Arena, a two-game set against the Madison Capitals on Oct. 5-6. The team is currently 3-1 on the young season.

I have learned that you need to be consistent every day. It is going to be a grind, but you will get better and push through it.

Two of the wins came in Blaine, Minnesota, at the NAHL Showcase against the Northeast Generals (4-3 on Sept. 21) and the Wilkes-Barre/Scranton Knights (4-3 on Sept. 22). Kelley picked up an assist in each game and his family was able to see him play.

“My family was able to come out and see me but most of my friends couldn’t come as it was homecoming weekend for them,” said Kelley. “It was a different experience as we were just about 20 minutes from my hometown. We stayed right in Maple Grove but I really didn’t get a chance to see it.”

Though he was playing close to home, it was a different and special feeling to be wearing the red, white and blue.

“It was such a great experience. We had seen the jerseys a little already but to see them hanging up at our lockers with all the equipment, it made it so much more real,” stated Kelley. “I can’t even explain how special it is to see them.”

Maybe it was why it was such an easy decision for Kelley to leave his home and move to Plymouth, Michigan, to train with some of the best players in the country.

“It’s amazing to see how they are able to help guys get to the next level,” he stated. “The hockey focus is there — you will train and get better. Plus, you get to have international experiences and play against other countries. There is nothing else.” 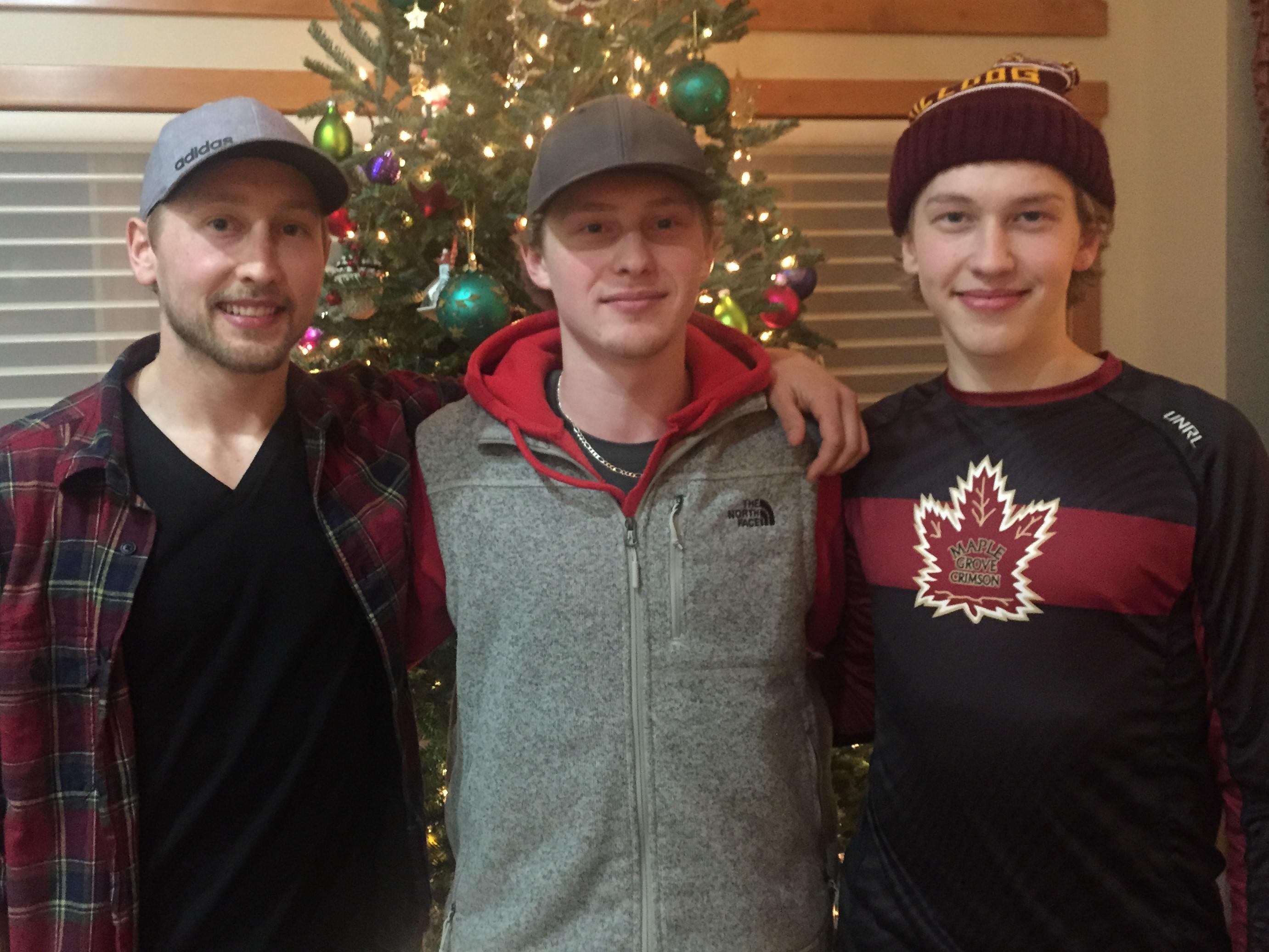 Connor with his two brothers, Matt and Justin.

Through those experiences, Kelley has learned a lot about himself and his game in the first month of the season.

“You have to work hard, both on and off the ice,” he said. “I have learned that you need to be consistent every day. It is going to be a grind, but you will get better and push through it.”

One thing is for certain. Kelley’s road to success started with his older brothers who pushed him each and every day.