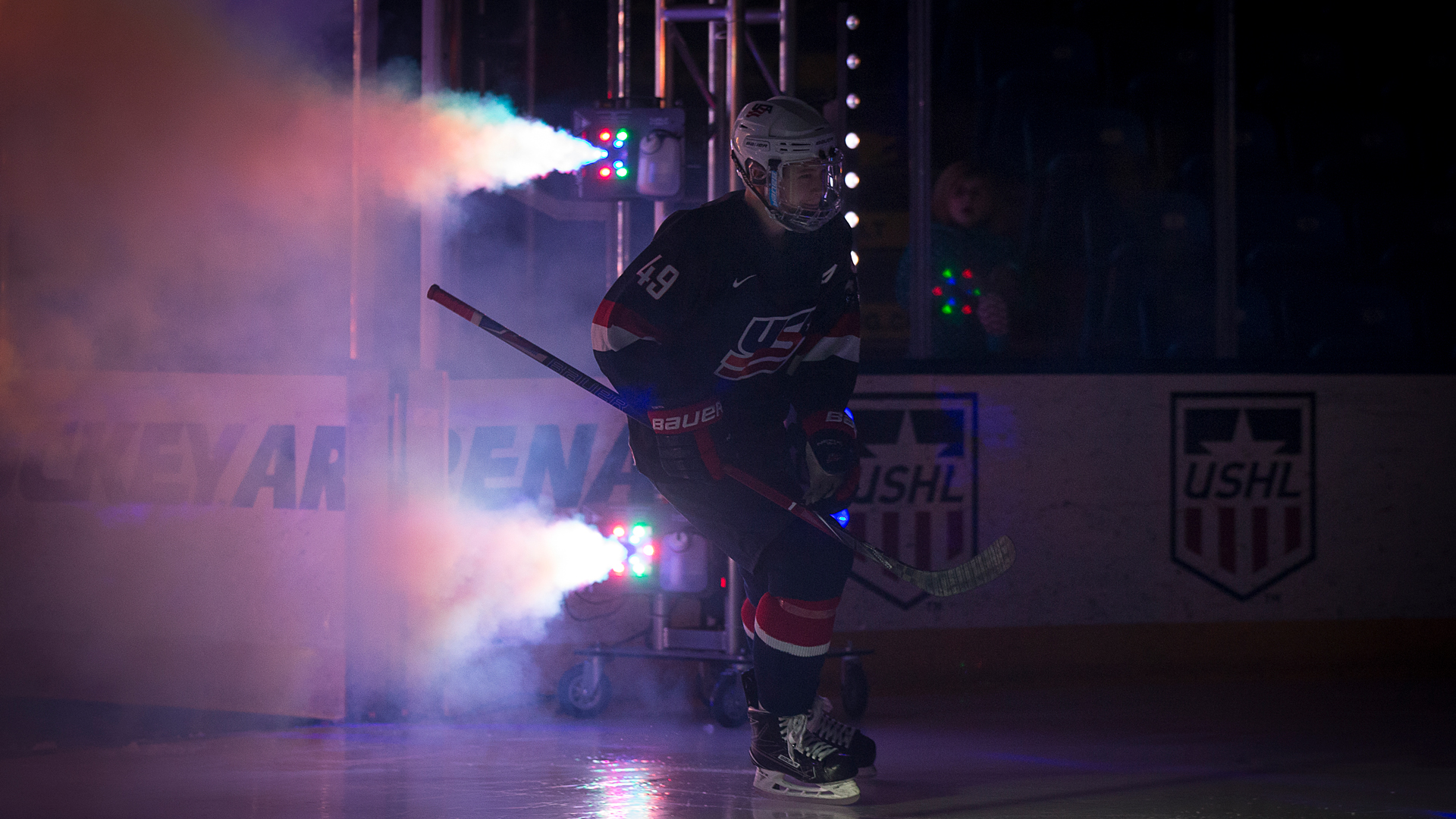 The U18s rallied from a 3-1 deficit with three goals in the third period.

The U18s outshot Sioux Falls, 12-4 in the first period. Caufield gave the U18s a 1-0 lead on the power play at 6:47 of the first period, wristing a shot from the lower rim of the right circle by Stampede goaltender Chad Veltri. Boldy, who fed the puck from the left circle to Caufield on the right, and Hughes drew assists.

Sioux Falls tied the game a 1-1 on a redirect by Blake Bride at 13:51 of the first period.

Although the U18s outshot the Stampede, 12-8 in the second period, Sioux Falls scored the only goals of the period. Artem Ivanyuzhenkov scored from the right circle at 5:31 on a power play to give Sioux Falls their first lead of the game. Jeppe Urup converted a 3-on-1 break with a shot from the hashmarks at 19:25 to extend the Stampede lead to 3-1.

But the U18s fought back in the third period, after some line changes by head coach John Wroblewski (Neenah, Wis.). Boldy joined a forward line with Judd Caulfield (Grand Forks, N.D.) and John Beecher (Elmira, N.Y.) and scored his team-leading fourth goal of the year at 3:03, assisted by Caulfield and Alex Vlasic (Wilmette, Ill.) to cut the deficit to 3-2.

The U18s tied the game at 3-3 thirty-four second later. Moynihan, who moved to a forward line with Hughes and Caufield, scored with a hard shot from the hashmarks at 3:37.

The U18s kept the offense rolling and re-took the lead at 11:37.  Rolston started the play in the Stampede zone and found Cam York (Anaheim Hills, Calif.) at the point. York attacked the net to the lower rim of the right circle and fed a back-door pass across the crease to Rolston, who scored at the left post.

Sioux pulled goaltender Veltri with 1:38 and tied the game at 18:55 when Andre Lee scored on a scramble outside the Team USA crease.

After a scoreless, three-on-three overtime, the U18s won the shootout with Rowe making the decisive stop on Anthony Romano to end the contest.

The U18s play the Omaha Lancers on Sunday at 4 p.m. E.T. in its final game at the USHL Fall Classic.

The U18s home opener is Saturday, Oct. 13 at 2 pm ET at USA Hockey Arena against the University of Minnesota. Season tickets, partial season tickets or individual game tickets can be purchased at the USA Hockey Arena box office, by calling 734-453-8400 or by visiting USAHockeyNTDP.com/Tickets.