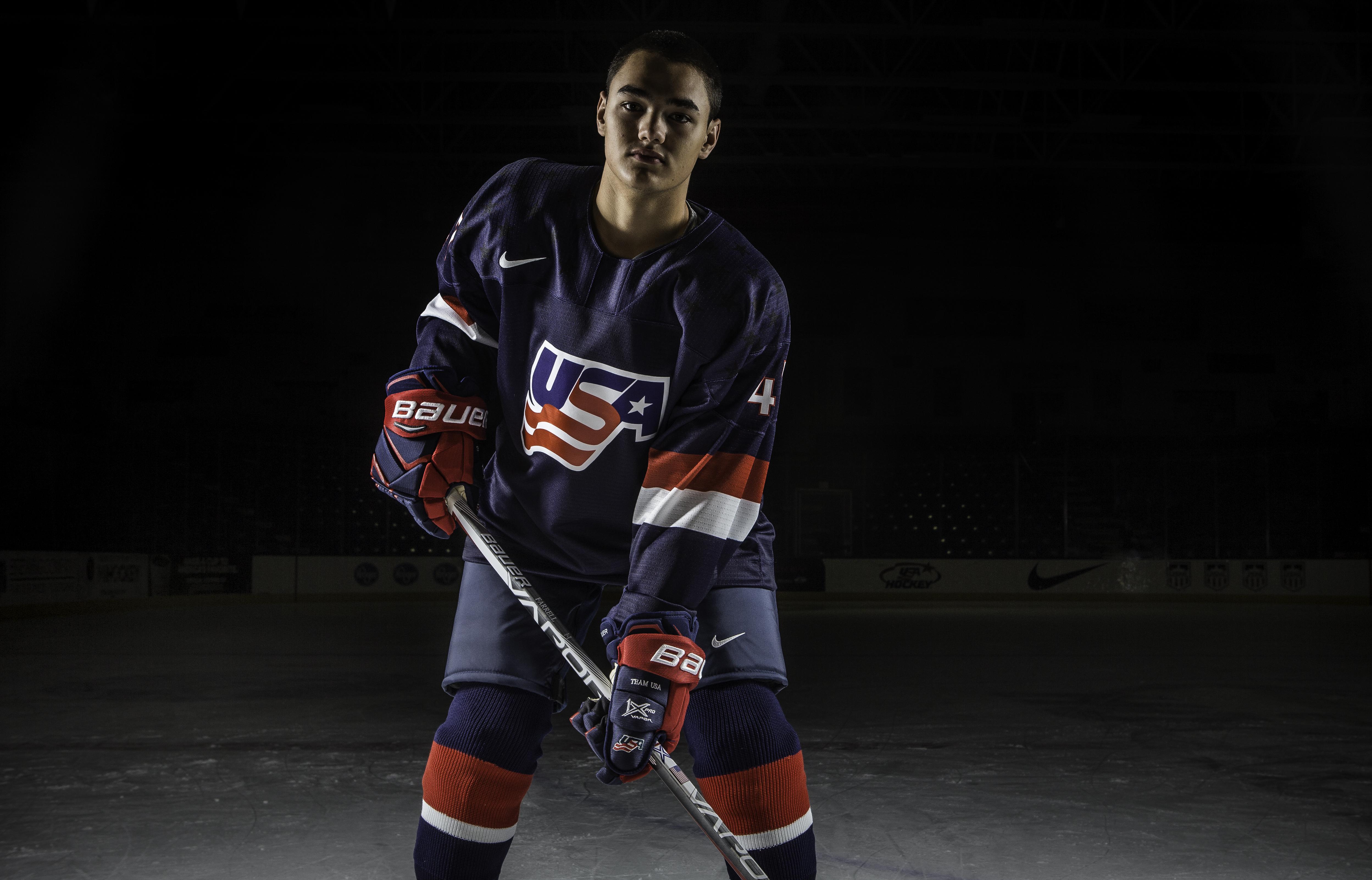 “I started skating when I was 3,” he explained. “My cousins played hockey growing up and my uncle loved hockey and he got me into it. I started skating on my grandparents’ lake and they taught me how to skate there. I started playing hockey a few years later.”

The Hopkinton, Massachusetts, native was all about being outside and having fun when he first started skating on the lake.

“When I was younger, we didn’t really go to rinks as much,” said Farrell. “I went out on the lake to have fun. As I started to like the sport more and more, I started taking real lessons and hockey started after that.”

Hockey was an easy choice for Farrell, even if he dabbled in other sports growing up.

“I played baseball up until last year and played lacrosse a little too,” he said. “Hockey was a fast and competitive game. It is a sport like nothing else. It’s just such a unique sport, playing on ice with skates, and so it’s a lot of fun.”

Even though he didn’t play baseball this spring, it helped that he had his USA Hockey National Team Development Program Under-17 teammates to hang out with instead to help him forget about it.

“It’s a little weird not to play baseball,” said Farrell. “At the end of the hockey season, it’s a nice change of pace to play baseball. It’s not a strenuous sport. This year, it’s a lot different. We are all up here together and doing the same thing so it makes it more fun.”

After looking back at his first season with the NTDP, the 5-foot-8, 170-pound forward realizes just how much his game grew. He credits his training as a big part of that success.

“Playing against the best kids in the country every day only makes you better,” he said. “I gained more confidence in my passing ability and ability to skate with the puck. At the beginning of the year, I think we were all kind of nervous to play against the older guys. As the year went on, we became comfortable playing our own game.”

That comfort factor was a boost to team chemistry.

“We are all a close bunch,” said Farrell. “We were really pulling for each other all season. Coach Wrobo was great for us. He instilled the values for us and we all followed what he wanted us to do. There was no one off the script.”

Another thing Farrell appreciated about head coach John Wroblewski was that as an NTDP alum, he understands exactly what the players are going through.

“I think Coach Wrobo has a ton of pride in what he is doing,” said Farrell. “He really teaches us what the USA crest on our chest stands for and it gives us pride going overseas. He wants us to do really well because he knows how much it means.

Farrell credits this as a big reason why the U17s won their opening-round USHL playoff series against the Chicago Steel.

“It just shows that we can come together as a group and compete with anyone,” he said. “Even though those kids were bigger and older than us, we were still able to find ways to win. We grinded out two tough overtime wins against Chicago on the road so that really showed what we were made of as a team.

It’s a really special feeling to wear the USA jersey,” he said. “I have a lot of pride playing for my country, especially going overseas and playing against Canada, Russia or Finland.

Farrell is appreciative of being able to wear the colors of his country each and every day.

It should come as no surprise then that one of his favorite games from this year took place on foreign soil.

“I think my favorite game was the game we played against Russia in Russia. That one was really special. It was a close game and the crowd in Russia was crazy. They were pulling really hard for the Russian team and we really had to come together as a team. We pulled out the close one so that was really cool,” said Farrell on the 2-1 victory on Dec. 16.

With that memory close at hand, Farrell plans to spend plenty of time this summer getting ready for his Under-18 season. He will have two current teammates — Patrick Moynihan and Henry Thrum — to help push him. 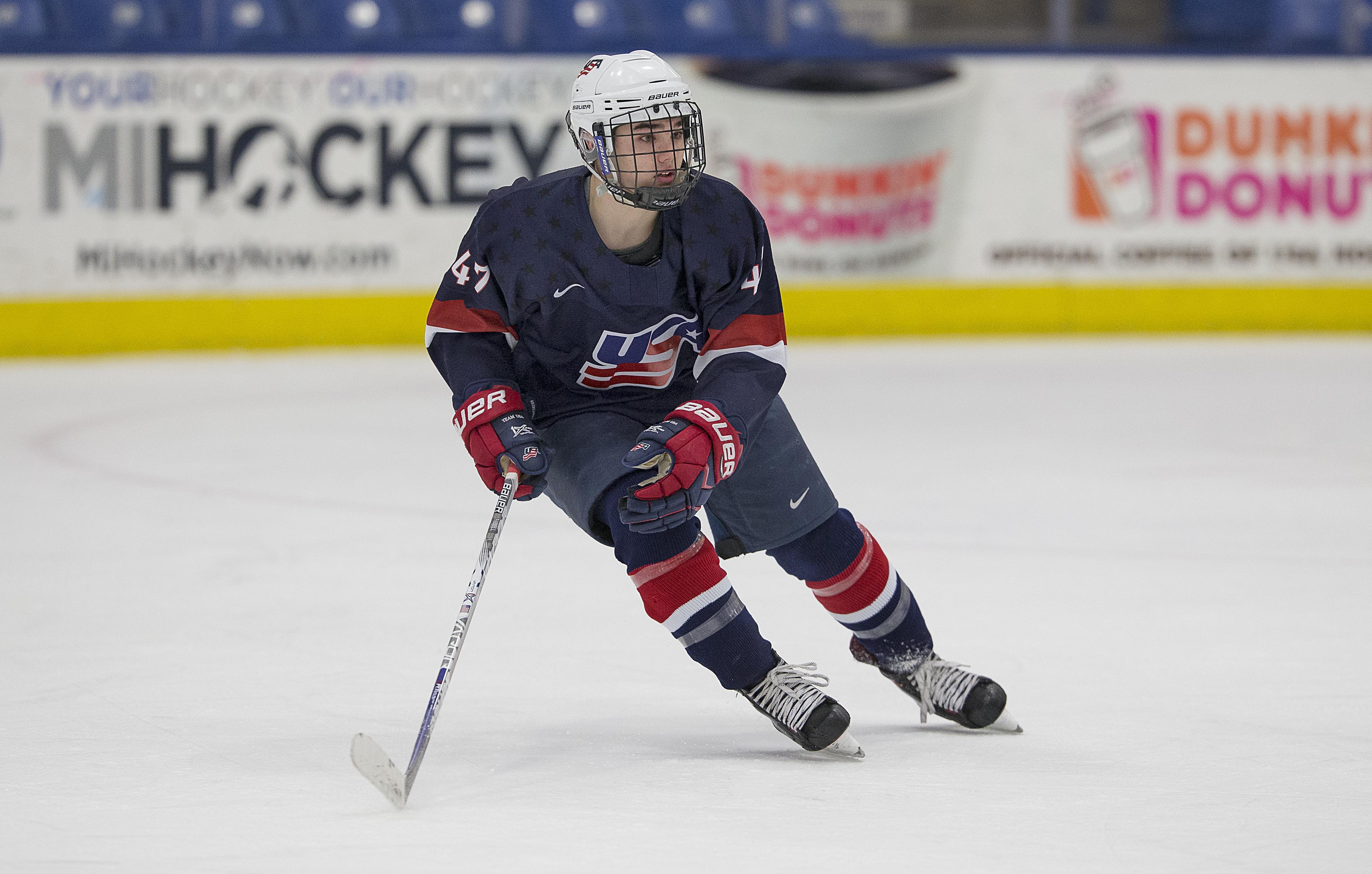 “I work out at [Edge Performance Systems] in the summer,” he said. “There are several pros that go there and two current teammates. We work out and push each other and have a good time with that. We all know that we have to get bigger and faster for next year and we have to push each other in the gym.

“One of the main things that I want to focus on the ice is shooting the puck and learn how to score in different ways. I also want to improve my skating in the corner and turn quicker.”