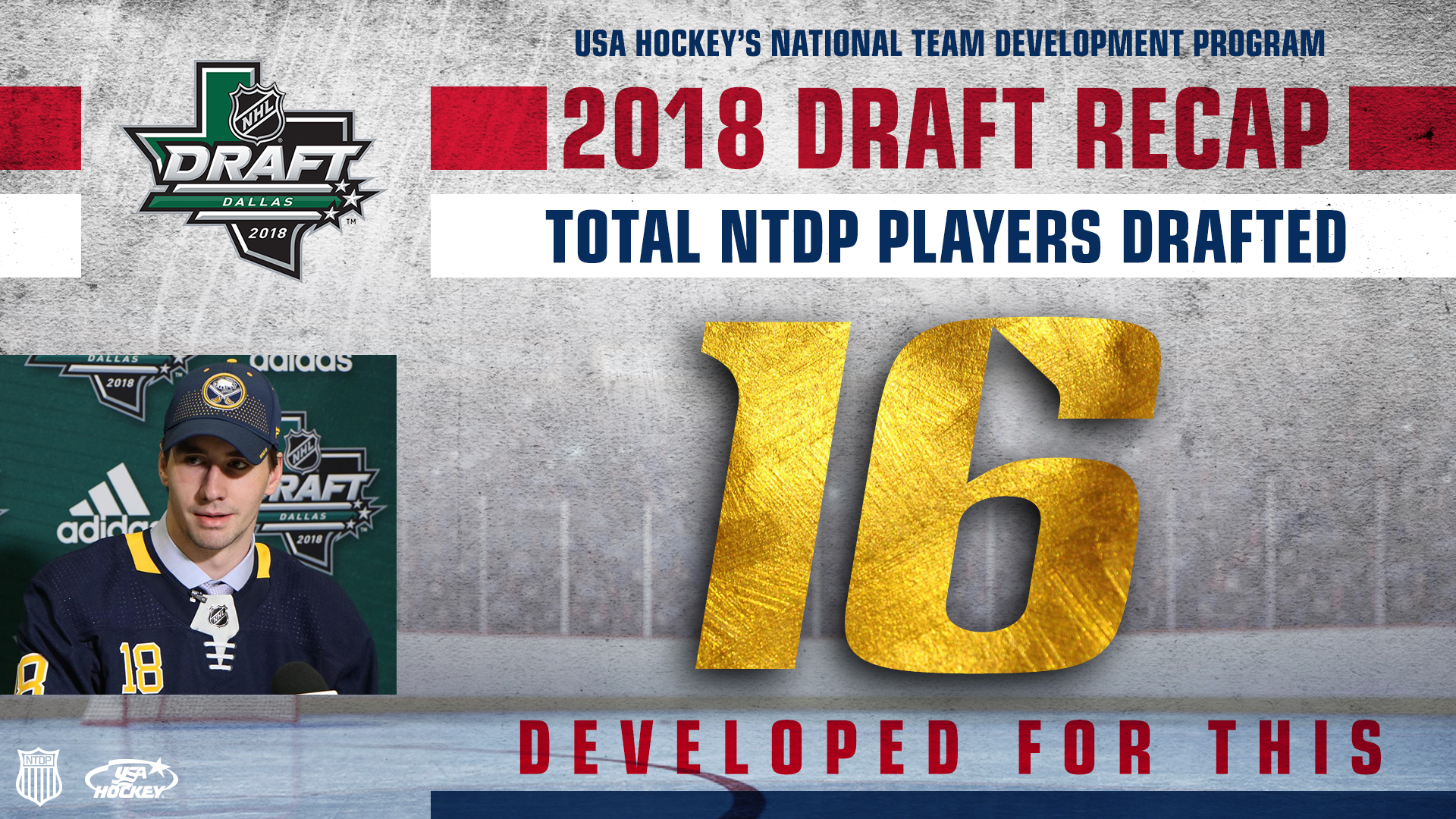 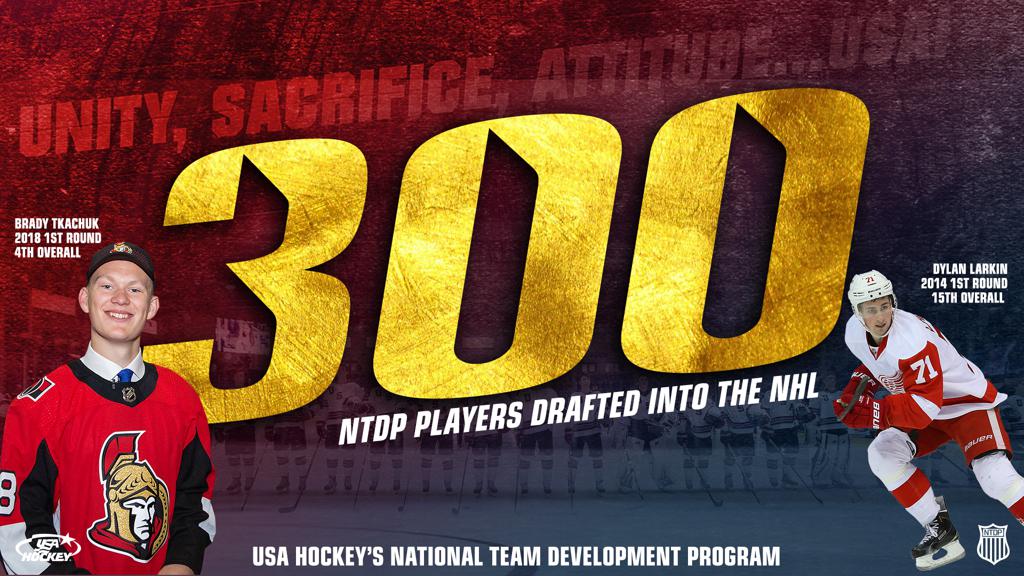 Defenseman Ty Emberson (Eau Clair, Wis./2016-18) was selected in the third round (73rd overall) by the Arizona Coyotes to become the 300th NTDP player selected. In total, 16 NTDP players were taken in the 2018 NHL Draft, including ten on the second day, running the overall total to 307 members selected since 1999.  In addition, a pair of players with an NTDP connection were also taken in this year’s NHL Draft.

Five of his Emberson’s teammates (plus another with an NTDP connection) were taken in the first round, held on Friday.

A player with an NTDP connection, Jay O’Brien (Hingham, Mass.) was selected 19th overall by the Philadelphia Flyers.  A center, O’Brien played in seven games for the U18s early last season and scored a goal and an assist.  He played the bulk of last season with Thayer Academy and scored 43 goals with 37 assists for 80 points in 30 games.

Before Emberson’s selection, the second day of the draft began with the Buffalo Sabres selecting defenseman Mattias Samuelsson (Vorhees, N.J./2016-18) with the first pick in the second round, 32nd overall. Samuelsson scored 11 goals with 20 assists for 31 points and was +13 in 58 games for the NTDP U18s last season.

Then came Emberson at 73.

After selecting Tkachuk on Friday, Ottawa came back on Day 2 of the NHL Draft to select forward Jonathan Gruden (Rochester, Mich./2016-18) in the fourth round, 95th overall. Gruden scored 28 goals with 32 assists for 60 points and recorded +39 in 61 games for the U18s last season.

Defenseman Stanislav Demin (Cyprus, Calif.) played one game for the U18s last season, recording an assist on Dec. 19 in a 6-3 loss to Muskegon. Demin was selected by the Vegas Golden Knights in the fourth round (99th overall). 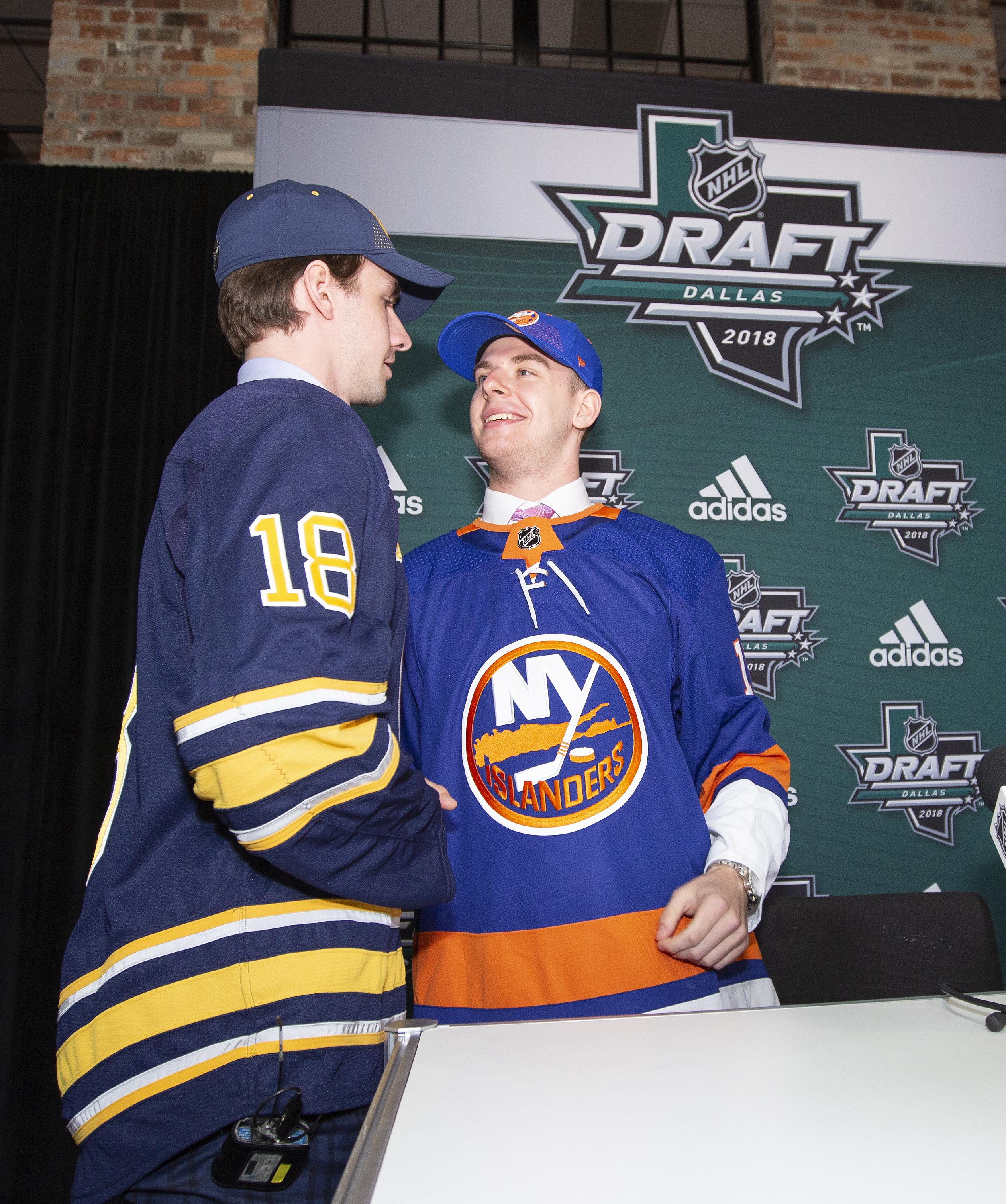 The Islanders’ run on NTDP players continued in the fourth round (103rd overall) when they selected Jake Pivonka (Naperville, Ill./2016-18). Pivonka scored eight goals with 12 assists for 20 points in 59 games for the NTDP U18s last year.

Later in the draft, the Nashville Predators took defenseman Spencer Stastney (Mequon, Wis./2016-18) in the fifth round (131st overall).  Stastney scored two goals with 26 assists for 28 points and was +40 (second on the team) in 57 games last season for the U18s.

The New York Islanders selected left wing Blade Jenkins (Jackson, Mich./2016-17) in the fifth round (134th overall).  Jenkins scored four goals with four assists for eight points in 56 games for the Under-17 Team during the 2016-17 season.

After selecting Farabee in the first round of Friday, the Philadelphia Flyers returned to the NTDP on Saturday when they selected left wing Gavin Hain (Grand Rapids, Minn./2017-18) in the sixth round (174th overall). Hain scored 15 goals with 20 assists for 35 points with +19 in 61 games for the NTDP U18s in 2017-18.