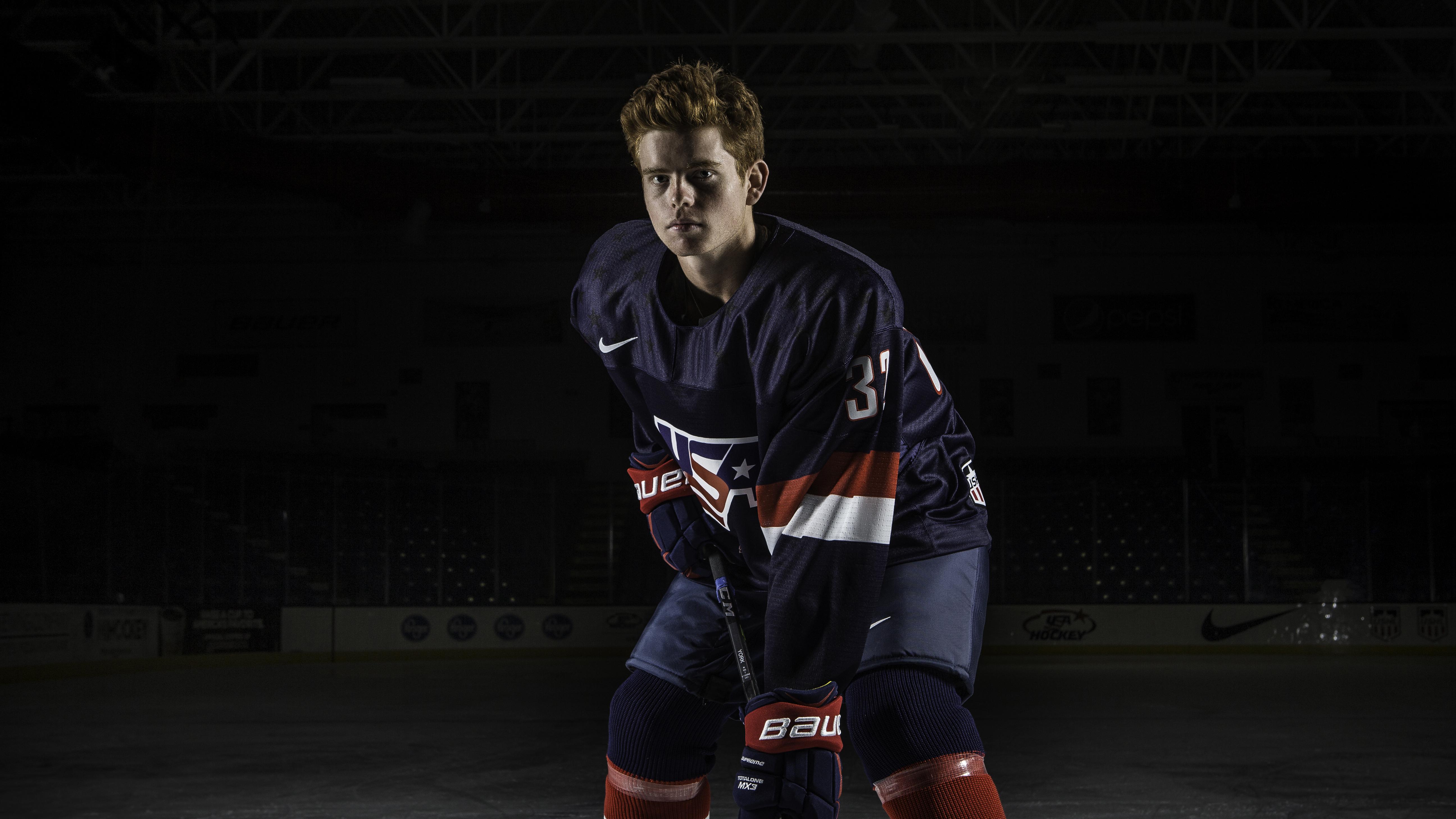 There is one special moment that will forever be etched in Cam York’s mind — watching the Anaheim Ducks raise the Stanley Cup when he was just 6 years old. Even at that young age, it had a profound effect on him.

“It was everything for me,” said York, who hails from Anaheim Hills, California. “I grew up going to the Honda Center and Ducks games. I remember when they won the Stanley Cup in 2007 and it really helped hockey in California. That is really when I told myself that I wanted to be the best hockey player I could be.”

Hockey was part of York’s vocabulary from early on. It was actually an introduction to roller hockey that started him down his path; however, he fell in love with the game that was played on ice instead.

“I started in roller hockey when I was 4 years old,” he said. “That was all they had in California where I lived. The rink closed when I was 8 and the only option I had was to play ice hockey after that. There were two rinks I could play at — one, which was where the Anaheim Ducks practice which was about 30 minutes from my house, and the other rink was about 45 minutes away.

“For me, hockey was all about the team thing. The other sports didn’t have that same feeling. You are with a group of guys and that is what hockey is all about.”

The cool thing for York was being coached by former Ducks defenseman Scott Niedermayer when he played for the Anaheim Jr. Ducks. Neidermayer was a player he looked up to when he was younger.

“He was my defensive coach when I was growing up, was on that Stanley Cup team and he was a big part of my development,” explained York, who is a 5-foot-11, 166-pound blueliner.

Playing defense wasn’t the first choice for York; it took a few injuries on his team for him to make the switch.

“I started at center but then two defensemen got hurt on the team,” he explained. “My coach put me back on D. I thought it would be just for a short time, but I ended up loving the position.”

To continue his development, York took his game to Minnesota and played for the famed Shattuck-St. Mary's School. From there he earned an invite to USA Hockey’s National Team Development Program in Plymouth, Michigan. He jumped at the opportunity to wear the colors of his country.

“Every day it is an honor and a privilege to wear the USA jersey,” said York. “It’s something that a lot of kids don’t get to do so I’m blessed to be able to wear it.

Favorite Movie
Pirates of the Carribbean

Favorite Activity Away From the Rink
Fishing

“Wearing the jersey comes with a task at hand. It motivates us to keep pushing. It takes lots of hard work to get to where we want to be and we need to keep working each day.”

He credits this mindset as part of the USA team success this season.

“It’s all about the daily competition. We all want to be the best we can be and we push each other to be the best. We are all good hockey players and that really helps keep our mindset,” said York, who finished the season with eight goals and 38 points.

“For me, I wanted to take it all in and find a way to make a difference at the worlds,” he stated. “I really wanted to take in what the older guys were doing and how they prepared for this event. They definitely do everything well and I really tried to duplicate that and take some of the lessons that I learned and implement it into my game.”

In addition, he took some words of advice from U18 Associate Coach Nick Fohr that really helped him when he took the step up to the older squad.

Wearing the jersey comes with a task at hand. It motivates us to keep pushing. It takes lots of hard work to get to where we want to be and we need to keep working each day.

“Coach Fohr told me to be myself and to play my game, especially going into worlds,” York said. “I need to play the way I do and not to change my game, just because I am on a different team with new players. It was definitely helpful advice.”

Even though York and his teammates earned the silver medal, he does have one favorite memory from the U18 World Championship, and that was the 5-1 quarterfinal win over Russia on April 26.

“For us, it was the game against Russia,” said York. “It was 1-1 going into the third period and we really had to dig deep to win that game [scoring four goals in the third period]. The crowd was cheering for Russia and it seemed like no one wanted us to win. That game really showed what we were able to do and believe in ourselves.”

York knows he can take his experience from worlds and really apply it to his U18 year with the NTDP. He understands what he needs to do to have success next year.

“I need to take that whole experience and apply it to next year,” said York. “Each day, we need to practice hard and prepare hard to reach our goals.” 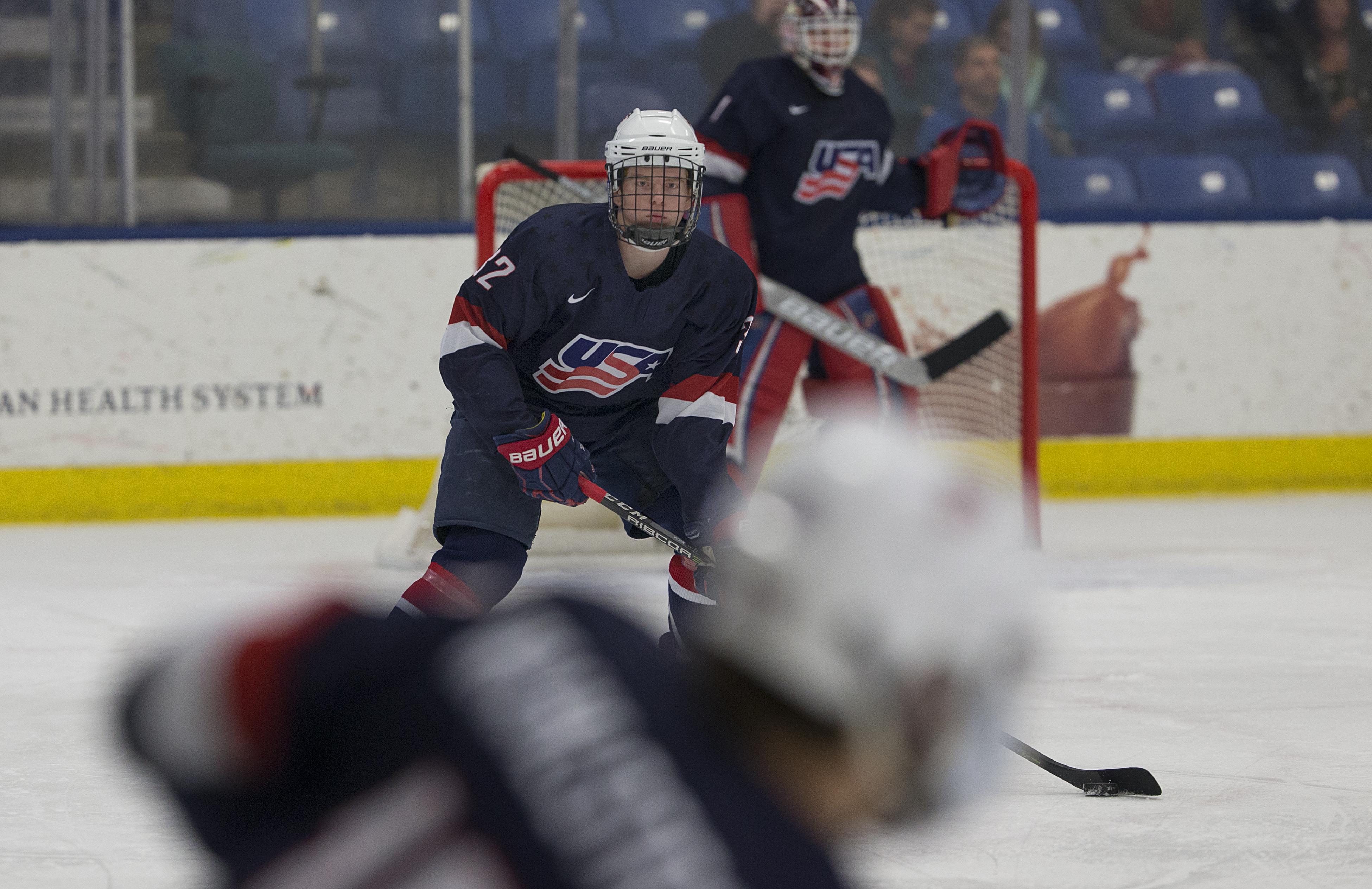 Part of that practice regimen is the off-ice conditioning that has helped his game grow. There is one small challenge that he is really proud of from this past year.

“Lifting was hard and a challenge at first for me,” he explained. “When we first started, we had to do pull ups and we had to get in 15, 10 and five and that was a challenge for me. I could barely do 12. Now, I can do the 15, 10 and five, even if it’s a grind by the end. That is what makes us stronger and motivates us to get better.”

And with that motivation, one day York hopes for the opportunity to raise the Stanley Cup, just like his hometown heroes.