Playing away from home is tough, but bond with teammates helps 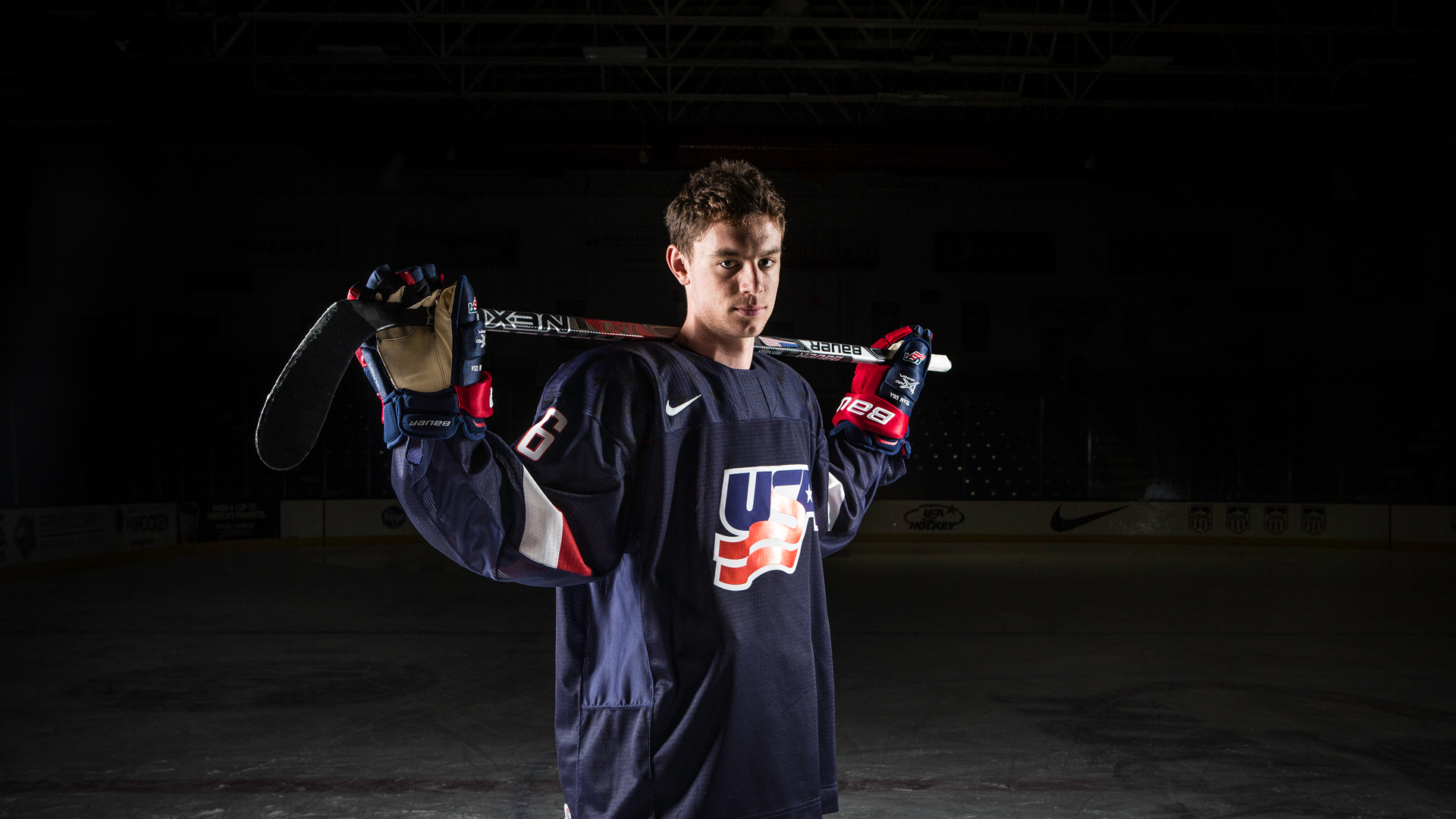 There were plenty of things that Patrick Moynihan missed about home during his first season with USA Hockey’s National Team Development Program.

There was one special person that he missed the most.

“I have a twin sister [Ciara] and this is the first year we have been separated,” explained Moynihan, a native of Millis, Massachusetts. “Last year, we would always come home and do our homework together on the dining room table. It was always fun to do that together. Growing up, we were in the same classes in elementary school so it’s different not seeing her every day.

“It was different. I remember at first, we would try and FaceTime quite a bit just to stay in touch. Once I got into a new routine, we still found a way to connect. I definitely miss seeing her.”

Family is very important to Moynihan. After all, he has an even larger cheering section back home, including his parents, Michael and Patrice, and two other sisters, Corey and Cayley.

“I have three sisters and we are all pretty close. We definitely try to keep in touch when it’s a tough day or such,” he said.

It was his dad that first started him in the sport of hockey when he was 3 years old.

“There is really not a lot of hockey in my family. My dad played a little in high school but he mostly played football and baseball which were his passions,” explained Moynihan. “I got into the sport at my local rink. At first, I was crying and really wanted to be with my dad. Then, he took me to another rink and another skating instructor, and I fell in love with it and it really took off.

“I loved the pace of hockey. I was always watching it on TV. I have been a die-hard Bruins fan since I was little. I always seemed to have a stick in my hand, stick-handling and shooting.”

Michael Moynihan knew what his son was going through this season. He left home himself to go play football and baseball at Columbia University.

“He had a big time influence,” Patrick said. “This year, he went through a lot of struggles with me away from home. He left for college when he was 17 to go to New York City and Columbia so he was on his own. He said, ‘If you love it, it is worth it.’ He is always a phone call or a text away. He always said to put your heart into it and always work your hardest and it will work out for you.”

His oldest sister Corey played soccer at Cornell, so she was someone else he could turn to for advice.

Moynihan was able to find a second family in the form of his NTDP teammates that helped ease the homesickness. He credits that togetherness as a big reason for the team’s success this season, which included winning three international tournaments and winning the squad’s first-round United States Hockey League playoff series.

“How close we are was a big reason for our success,” he said. “I have never been on a team like this. It is definitely a brotherhood. It seems like every day when we go to the rink and have a workout, everyone is having a good time. There is no slacking off at all — everyone is going 100%. Every guy on this team makes each of us better.

“We all came together for a common goal — to win games, win championships and win gold medals. We have the talent and the heart in the room to do. I think it was just a matter of time.”

That “a-ha moment” came at the end of October when Moynihan and his Under-17 teammates were at the Under-17 World Challenge in Dawson Creek, British Columbia. It was something really simple that happened and he knew that this team was going to be just fine.

It is something that I really take to heart. I love those guys, whether we are on the ice or off the ice. It’s great to be with them all the time.

“When we went to Dawson Creek for the World Challenge, we really bought into winning that gold medal,” he explained. “The look on everyone’s faces and how intense it was and everybody wanted it. It really made you appreciate it and want to go into battle with your brothers every day.

“It is something that I really take to heart. I love those guys, whether we are on the ice or off the ice. It’s great to be with them all the time.”

The 5-foot-10, 172-pound forward says he took some advice from the U17 coaching staff — John Wroblewski, Greg Moore and Kevin Lind — and skated off with it this season.

“It’s simple stuff — you can’t take any periods off,” they told him. “One thing is that everyone is watching and judging you this year on what type of player you are and what type of team you are, so you need to perform at your best whether it’s a game or practice. 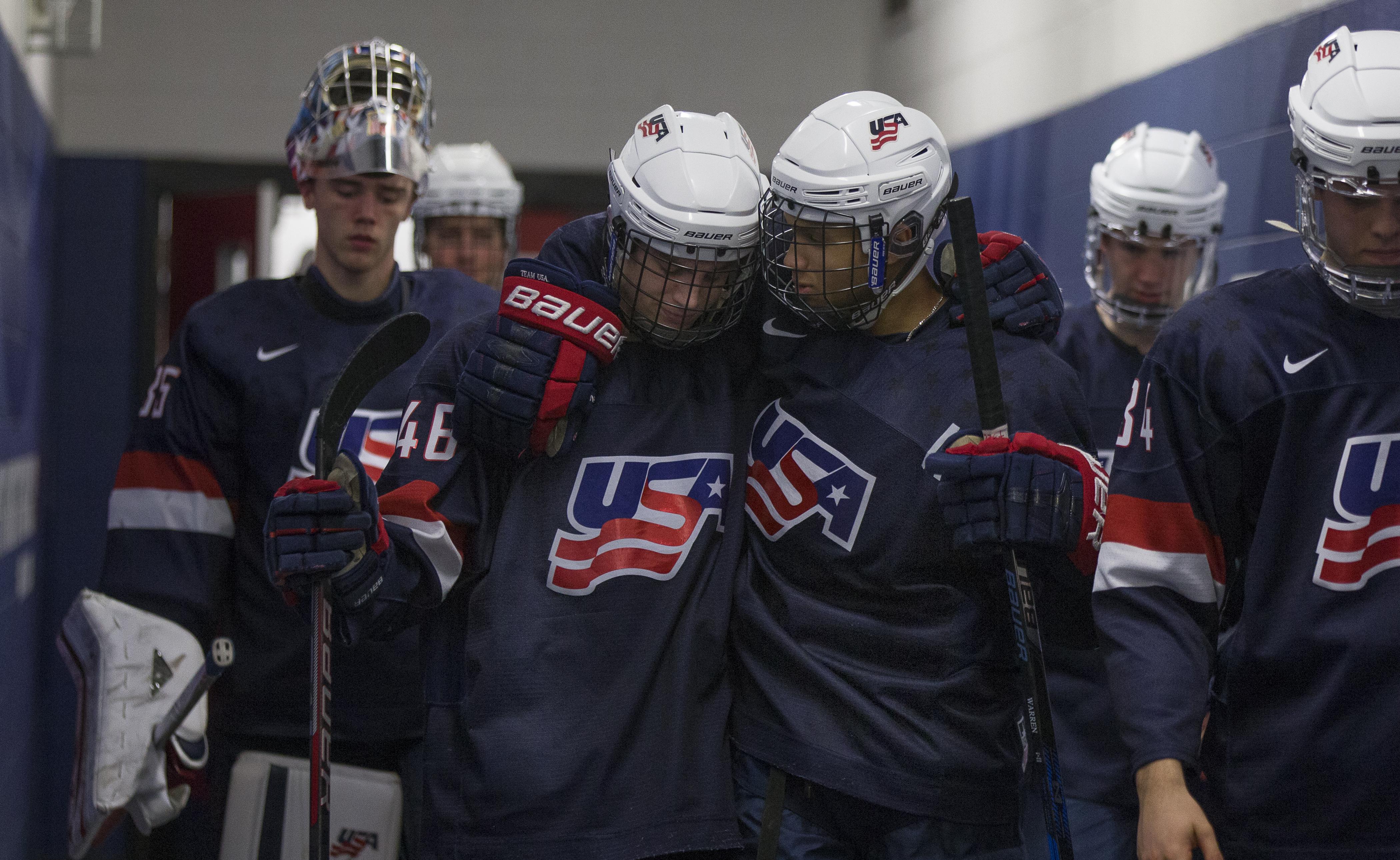 One thing will never change and that is how much pride he has in being able to wear the colors of his country each and every day.

“Representing this country in international events and wearing the crest every day means the world to me,” ssaid Moynihan. “It’s just amazing to come to the rink every day and see that crest on our jerseys.

“It was crazy the first time we walked into the locker room and saw the jerseys hanging up. I just remember the look on the guys’ faces and then, you look around and turn that jersey around and see your last name on it, it’s very surreal.”

Of all the memories Moynihan made in his U17 season, some of the best came on the road.

“I can’t put my finger on one but I love road trips,” he said. “When all the guys are together, it’s fun to be together whether it’s on the bus or in the hotel rooms. We always find stuff to do to make it fun. It’s tough sometimes when you are in a hotel room in Omaha or Iowa but it’s those special moments that you will remember.”