NTDP defenseman started out at forward 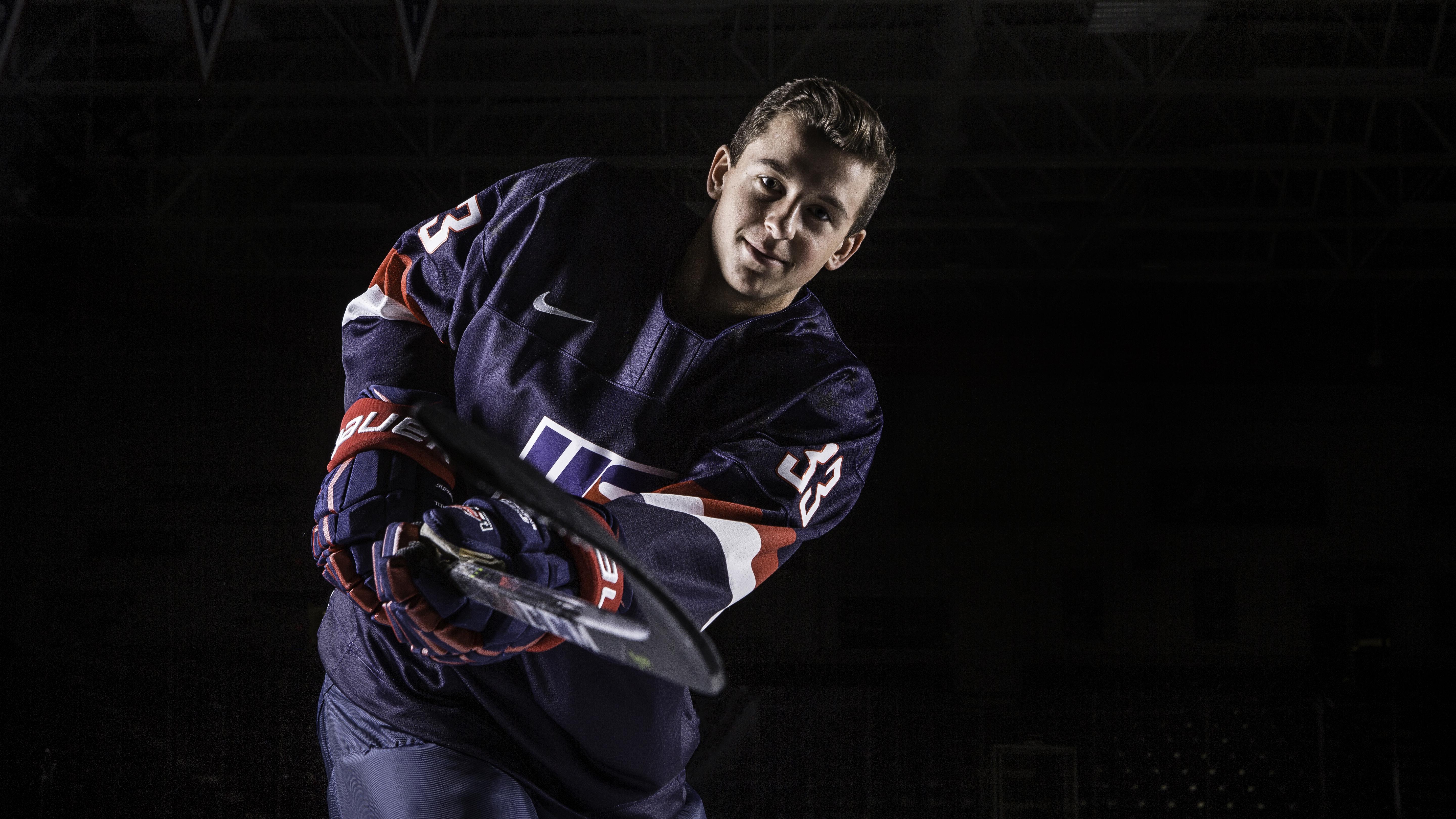 A learn-to-skate and learn-to-play program at his hometown rink, along with the helpful prodding of a friend, was all Henry Thrun needed to kick-start his love of hockey.

“I started playing hockey when I was about 7, so a little later than most kids,” said Thrun. “One of my best friends [Louie] had started playing and he convinced me to play the game. He was really the one that talked me into it. My mom and dad both played hockey but I really wasn’t into it before that.”

It’s easy to figure now just how much the Southborough, Massachusetts, native loves the sport.

“I would honestly say the process of being able to work out and train, and to play the game and compete for championships. You need to put in practice to make this happen and I love doing this,” Thrun said.

Thrun, who now stands in at 6-foot-1 and 180 pounds, wasn’t always a defenseman. It was almost by chance that he ended up patrolling the blue line.

“I have no idea,” he said. “I started as a forward because as a little kid, you like to score goals. My mom and dad both played forward so it was not because of them. One day when I was about 9, my club coaches decided to make me a defenseman because I was a good skater. I really enjoy playing the position.”

Growing up, Thrun had two favorite defensemen that he liked to watch play in Duncan Keith, who plays for the Chicago Blackhawks, and fellow USA Hockey National Team Development Program alum Noah Hanifin, who now plays for the Carolina Hurricanes.

“Noah is similar that he played at the prep school and then, the NTDP and now is his playing in the pros,” he said. “It is neat to work out at the same gym as him during the summer. There are a lot of pros who work out there and I can watch how they act and what they do.”

Thrun, who hopes to follow a path similar to Hanifin, is already in that first step and is playing for his country as part of the NTDP in Plymouth. The transition was difficult at times in a number of ways, but one thing definitely stood out.

“The day-to-day schedule was definitely a big change,” he explained. “You wake up early to go to school then you go to the rink for a workout and practice. Afterwards, you go home and eat dinner with your billet family and then, you have to do your homework. It was a major time commitment and a big step up. I think the NTDP does a good job of preparing you for that next step.

Favorite Movie
The Other Guys

Favorite Book
The Boys of Winter

“I’m going to Northville High School right now and we have about 2,400 students in the school. I went to St. Mark’s Prep School before coming here and there are about 90 kids per grade or 365 students total. That also was definitely a big change.”

Thrun and his Under-17 teammates will go down in the NTDP history books after a record-breaking season. The squad finished with a 42-19 overall record, and won their first-ever playoff game (3-0 over Chicago on April 21) and captured their first-playoff series (3-1 over Chicago).

“For us, at the start of the year, we set a goal and wanted to make the playoffs,” said Thrun. “We had some success and we realized that maybe making the playoffs was an option. The process that led up to the playoffs was good for us. We definitely had to work hard.”

The U17s fell in the Eastern Conference Final to Youngstown, 3-1.

“Honestly, it was a tough series,” said Thrun, who had two goals and six points in the series. “We played a good team and I thought that everyone played well. We got some good goaltending and I think we gave it our all but we came up just short.”

The success also was seen in international play too. The U17s won all three tournaments — the Under-17 World Challenge in British Columbia, the Four Nations in Russia and the Five Nations in Finland. He said it was a simple formula for success.

“I really have to credit our success with our coaches preparing us for the tournaments,” explained Thrun. “This team plays with pride and we have a close team that wanted to win. I grew up watching international games on TV. There is something about playing for your country that you cannot explain.”

He does have one favorite memory in international play from this year.

“The gold medal game against Canada [at the U17 World Challenge, a 6-4 win]. We went up in that game [5-0] and thought we had the game under control,” said Thrun. “Then, they scored one goal and then, another and another. That was the loudest arena I have ever heard. There were Canadian flags waving everywhere. It felt good to win and stand together with my teammates and hear the national anthem.”

Hearing that anthem, as well as wearing the colors of his country each and every day, remains very special. 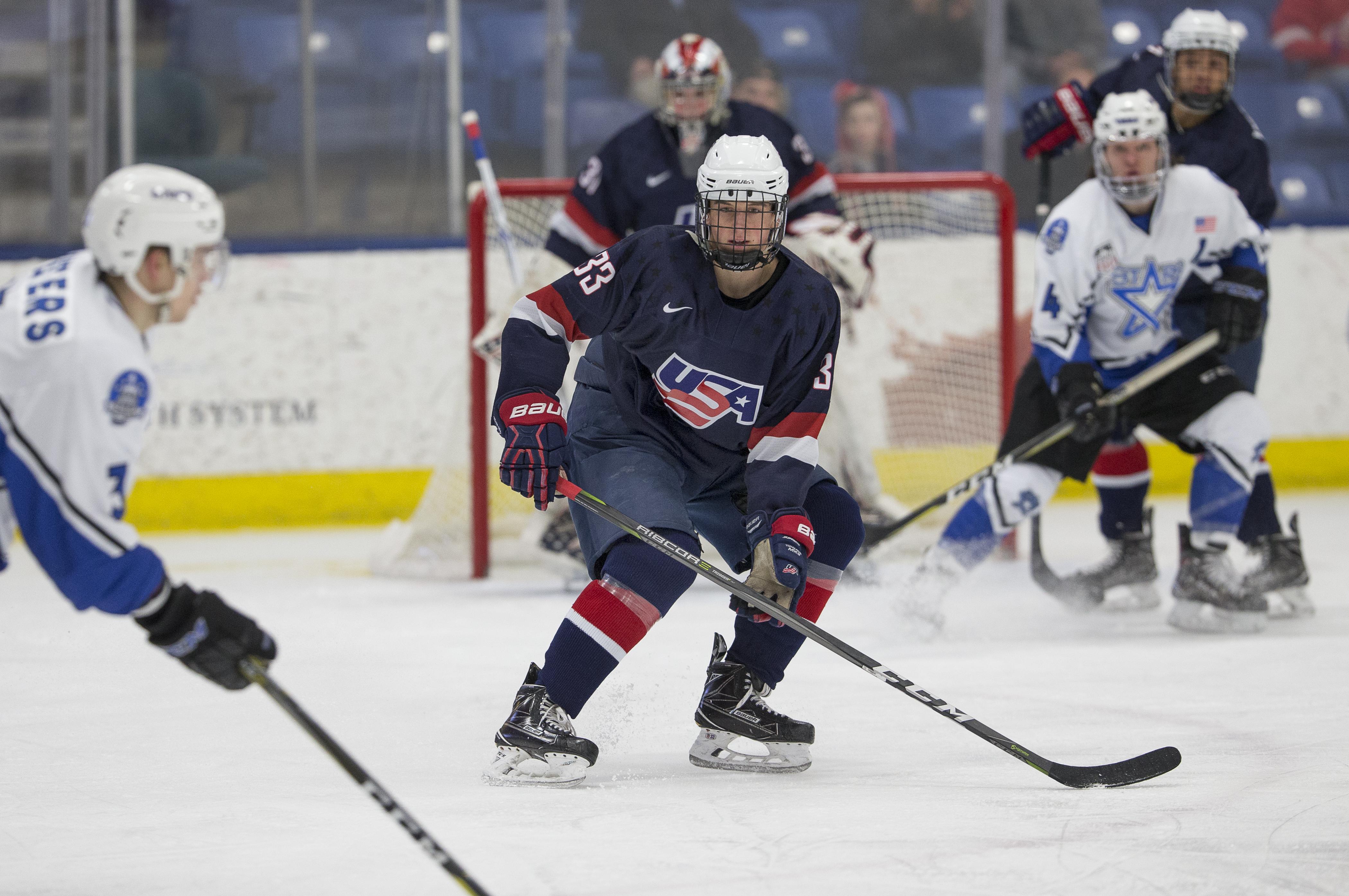 As Thrun readies for the rigorous spring training schedule of the NTDP, he realizes just how much he has learned about himself this season.

“One thing I have learned is to utilize my teammates when you are not at your best,” he said. “I have never played a season like this before. I plan to take what I have gained and learn from it. I think it will only help my game, going into the summer and to get ready for next year.”

He has some very simple summer plans.

“Personally, I want to spend more time in the gym and on the ice. I want to become a better skater and really work on my shot over the summer,” Thrun said.

And this time, it will not take much prodding.