Joel Farabee Enjoyed Speed and Strength of Under-18 Season 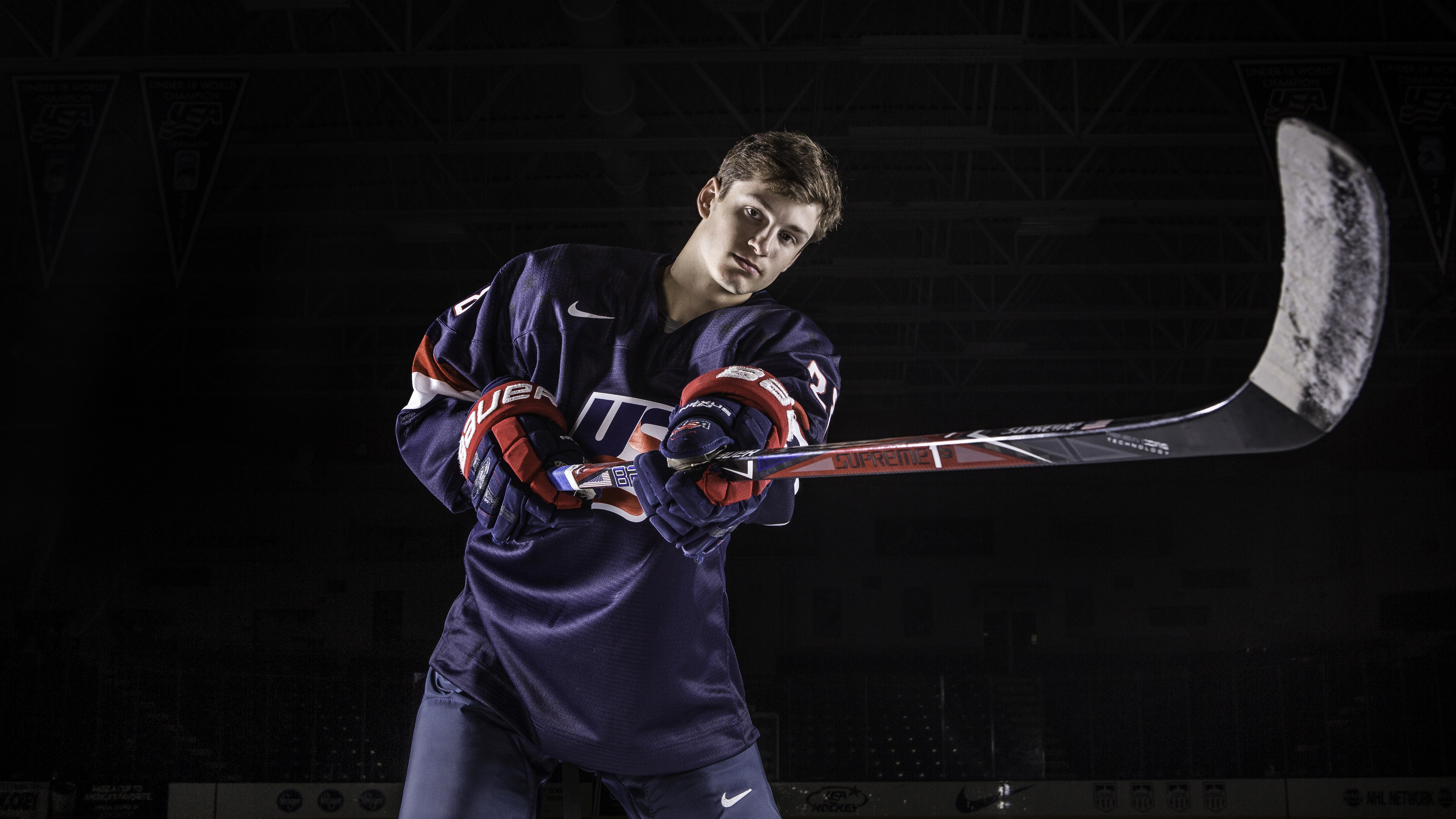 Sometimes it is the simple advice that helps the most, and that’s exactly what USA Hockey National Team Development Program forward Joel Farabee got from head coach Seth Appert, helping his game take off in his Under-18 season.

“Coach Appert told us to play fast,” Farabee said. “Last year, we were a bit slow. Now, we like to get into the offensive zone and play fast.

“I have matured as a player, finding out what I do best which is being around the net and scoring goals.”

He credits the training in May of 2017 as a big reason for not only his individual success but also the team success this year.

“Personally, it was really good to gain weight and get stronger,” said the 5-foot-11, 162-pound forward. “Personally, for how bad it was, it really brought us together as a team. We really struggled in our [Under-17] year but after spring training, we were ready for this year.”

Farabee and his teammates had just one thing on their minds when it came to this season.

“Heading into our U18 year, we wanted to prove people wrong,” he said.

One of his favorite experiences from this past year was winning the Five Nations in early February at USA Hockey Arena. It really helped set the stage for the team’s final push and the Under-18 World Championship in Russia in April.

“That was good test for us,” he said. “We lost to the Czechs and knew we had to win our last two games to win the tournament. It was really tough but we did it and persevered.

“The Russia game was my favorite. It was really awesome to see how we rallied together especially after going down 3-0 and coming back to win it in the last minute. When Tyler (Weiss) scored, everyone froze for just a second because nobody knew if it really went in. I remember him running down the ice. The crowd was great that night and we were really excited.”

Farabee closed out his NTDP career by capturing a silver medal at the U18 worlds, after falling to Finland 3-2 on April 29 in the championship game. Farabee is one of a handful of players to win medals in back-to-back years after winning gold as an underager at the 2017 tournament in Slovakia.

“It’s really cool to win two medals,” he said. “It’s awesome to represent your country. It’s a great feeling. I love my country and I get to do that every day.”

He knows from his past experiences just how difficult it is to win the event, not only physically, but also from a mental perspective

“It was a long tournament. You have to have a good mindset every day. We only played two games the first nine days we were there. You get bored over there but you have to stay on the right path,” said Farabee.

Plus, Farabee has a knack for scoring big goals when it matters most. He finished with four goals and eight points in seven games at the tournament, including two goals in the 5-1 win over Russia in the quarterfinals. Standing at the blueline after the game and singing the national anthem was something he will never forget.

“It’s really cool to win two medals. It’s awesome to represent your country. It’s a great feeling. I love my country and I get to do that every day.”

“It’s really cool. At that point, you are playing for something that is bigger than yourself and even your team. It’s really cool to be with your brothers on the blueline and representing your country,” he said.

The Cicero, New York, native will continue his hockey career at Boston University next year. It was an easy decision for him when it came to his future college team.

“The first time I stepped on campus, I knew it was somewhere that I wanted to play,” remarked Farabee. “I really like the coaching staff and they have great facilities. It’s a great place to go and develop as a hockey player.”

He will already have a jump start on some of his first-year BU teammates, as he played 18 college games this season against some of the top teams in the country. 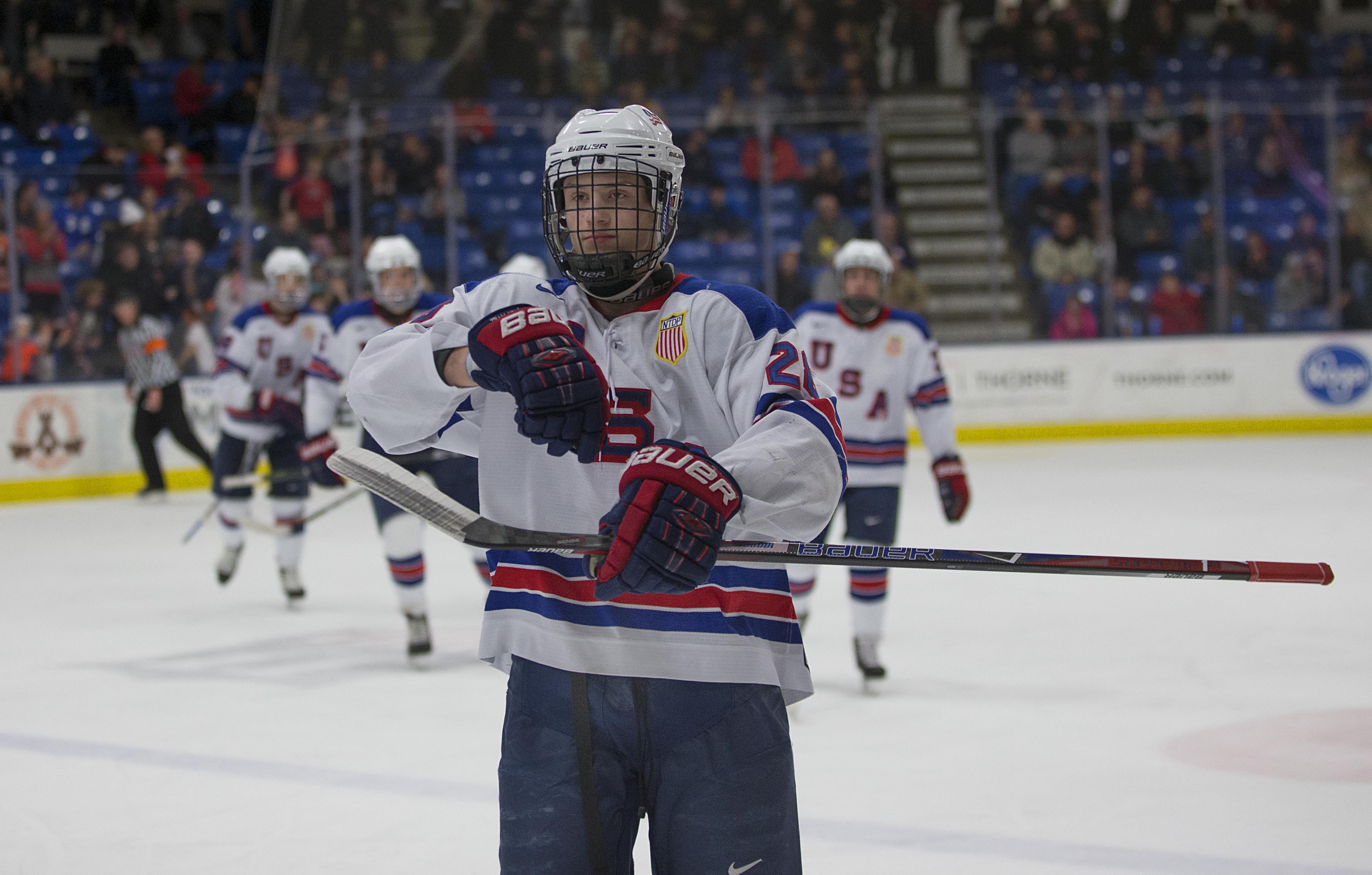 “It will help a lot to have played those games,” stated Farabee. “You are playing against older guys and it helps you figure out how they play at that level. Heading into my freshman year, I will also feel like a sophomore after playing college games this year. It has showed us how to play hard and be strong in front of the net.”

As Farabee gets ready to depart Plymouth at the end of the month, he will leave with plenty of memories. One stands out above the rest.

“Last year, when we won U18 worlds, I remember as the clock was ticking down and froze for a second and realized that we just won. Being able to celebrate with your team is pretty cool,” he said.