Mattias Samuelsson Has Treasured Wearing the “C” for His Country

NTDP blueliner is a leader on and off the ice 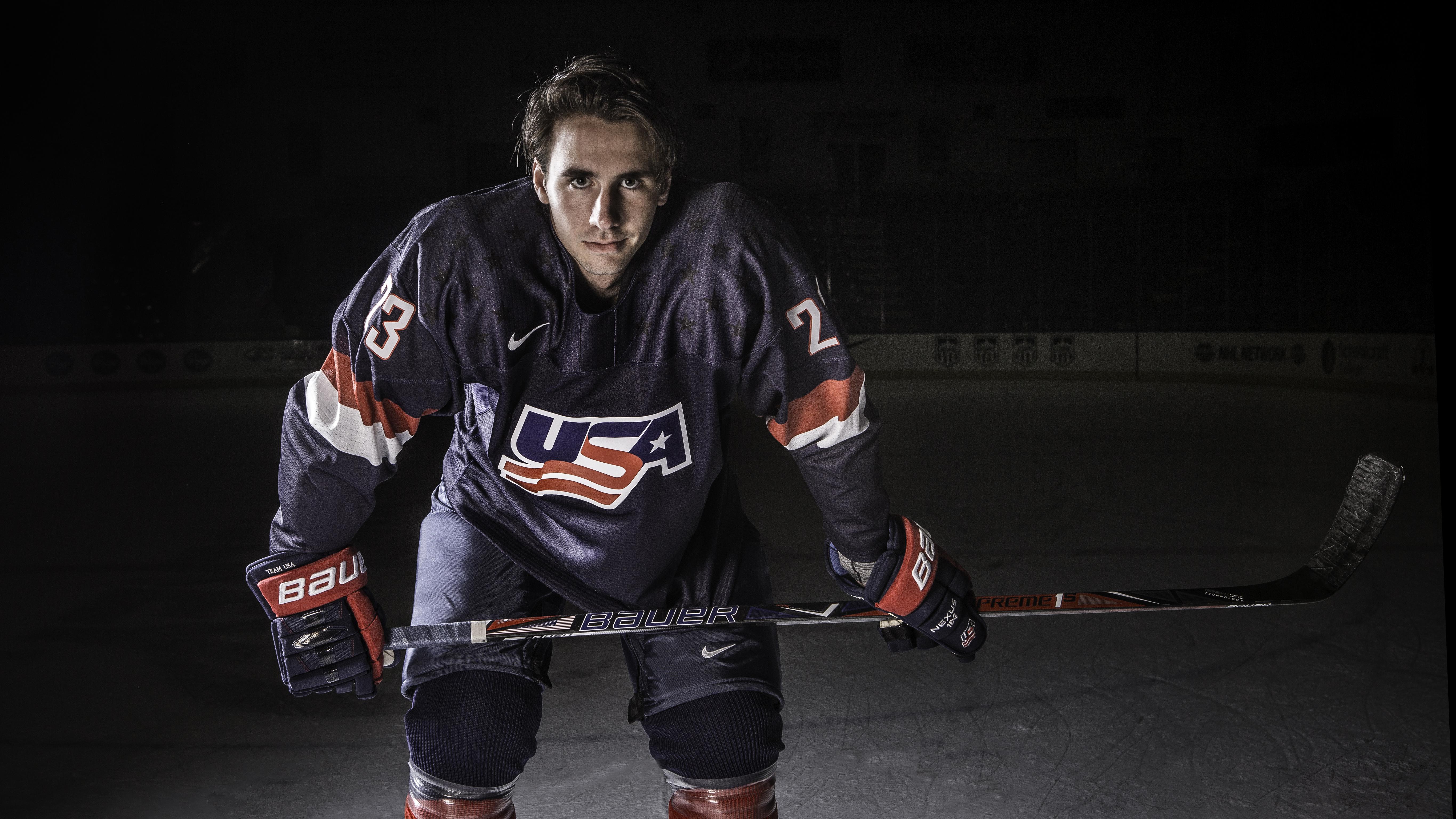 If you needed a sure sign that defenseman Mattias Samuelsson has earned the respect of his USA Hockey National Team Development Program teammates and coaching staff, just look at his shoulder.

He has had the honor and privilege to wear the “C” on his jersey as team captain for the 2017-18 season.

“It’s awesome,” said Samuelsson. “To know that you play for the U.S. National Team and play with the best 22 players in the country in your age and you are looked at as a leader on the team and respected by the guys. It’s definitely humbling. It won’t change my game at all. It’s nice to have but I still need to play my game, whether I’m wearing it or not.”

“Last year as a member of the U17s, we were just getting our butts whooped pretty much every night,” he said. “Last year, you played not to get scored on rather than trying to win games. This year coming in as a U18, you have more confidence. You trained all year for a comeback in the [United States Hockey League] and this year we have more confidence in trying to win and score.

“We only won four games in the USHL last year. You kind of think that there is no way we can be that good in the USHL this year. Then, you come in and see how much everyone has improved and how much the team has going. Honestly, it was pretty amazing to see how much one summer can do for a team.”

The biggest turnaround for Samuelsson was his off-ice training, especially over the summer. He was able to add close to 20 pounds of muscle to his body.

“We started here at the end of the year with Daryl [Nelson, the strength & conditioning coach] and we were able to realize how hard we need to work to be successful. At home, I didn’t skate too much. I did a lot of weights and other off-ice stuff.

“It helped my game tremendously. As a U17, I was a pretty tall, lanky kid. I definitely put on muscle and now I can hold my ground this year, especially against college teams.”

Samuelsson, a native of Voorhees, New Jersey, had the perfect role model growing up. His father Kjell played 14 years in the National Hockey League and is now the director of player development for the Philadelphia Flyers.

“He always tells me to stick up for myself,” he said on his dad’s advice. “It is probably the one thing he preaches the most. He works in the NHL, but he doesn’t try to coach me. He is a very supportive dad and he knows I’m a little feisty.”

Samuelsson will no doubt appreciate having another familiar face alongside him when he continues his hockey career at Western Michigan University in the fall. His brother Lukas will be a sophomore next year on the Broncos.

“When my brother and I started talking to colleges, we always thought it would be a dream to play college hockey together. That was a big influence for us,” said Mattias.

In addition, there is another family connection for the brothers. WMU head coach Andy Murray was an assistant coach when Kjell played for the Flyers.

He works in the NHL, but he doesn’t try to coach me. He is a very supportive dad and he knows I’m a little feisty.

“My dad played for him in the NHL and they have a long relationship,” explained Samuelsson. “I think that will be pretty cool as he is getting generations of our family. That was a big part too as my dad knew that I would be in good hands.”

In addition to Coach Murray, Samuelsson understands what the Broncos hockey program can do to assist with his development.

“The rest of the coaching staff has played or worked in the NHL so they know what it takes to get the next level. That is where I am trying to get so that will help. It is a good wining program and in one of the best divisions in hockey,” he said.

He already has a head start on his future freshmen teammates as he played against college teams this year as a member of the U18 squad. He knows it will be a huge help for him next year.

“When the [NTDP] guys go into college, the speed of the game is not too new for us,” explained Samuelsson. “We played almost 20 college games this year. We know what we are getting ourselves into rather than USHL guys who are experiencing it for the first time.”

He does have a few favorite college games from this past year. 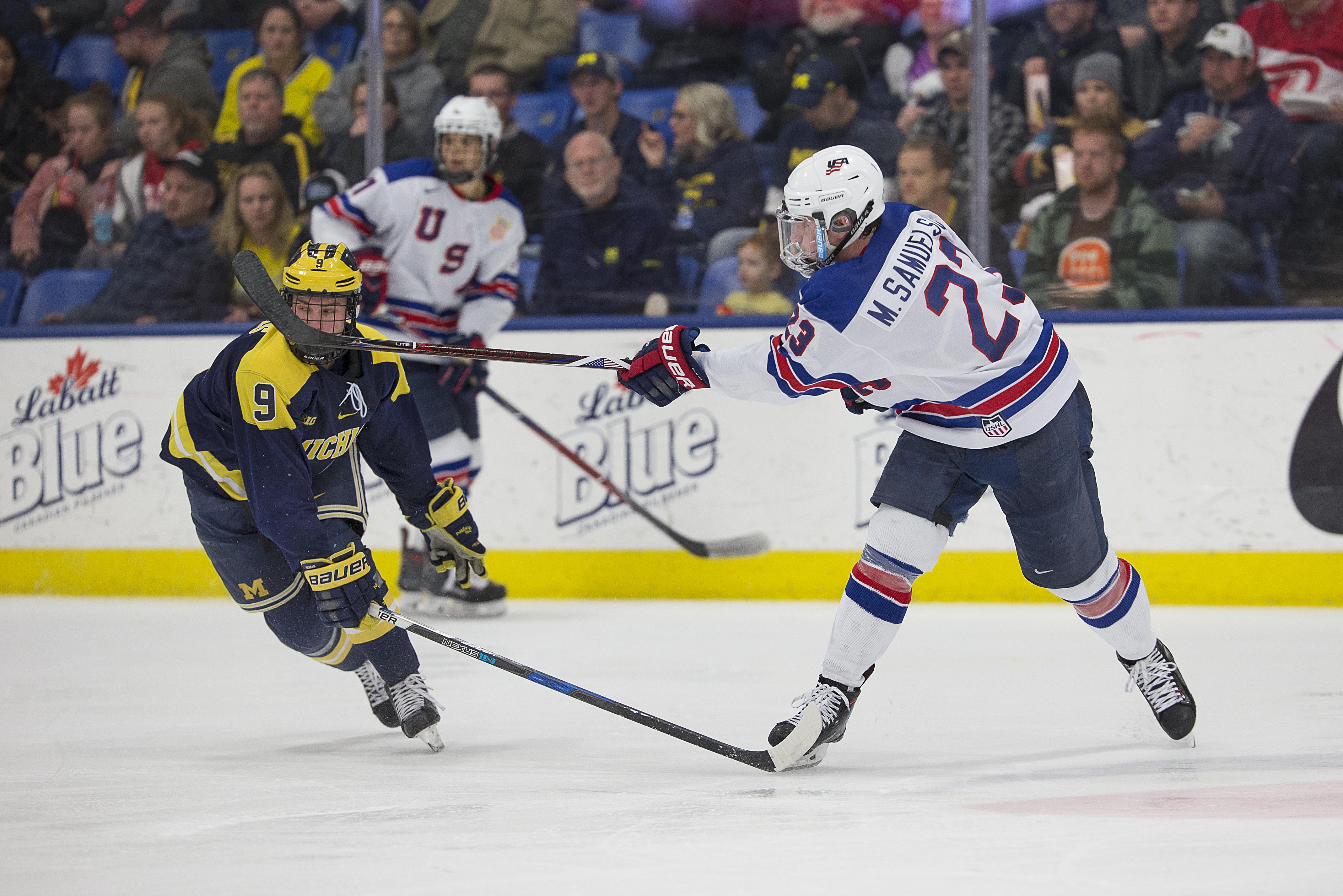 “The Michigan game here was cool,” he said. “It was sold out and it was the teddy bear toss. Our first game against Notre Dame, we came out for warm-ups and I completely forgot that college hockey has bands. We came flying out and the drums began beating. It was pretty cool experience for our first college game. The atmosphere was cool.”

For now, Samuelsson and his U18 teammates are focused on one goal and that is winning a gold medal at the 2018 International Ice Hockey Federation Under-18 World Championship in Russia. He understands what it will take to make this goal happen and just how special it will be.

“We have had an interesting two years here. The guys that are here and have stuck it out and win a gold medal for each other is something we would cherish for the rest of our lives. It is something to leave with our legacy here.”

That legacy includes wearing the USA jersey with pride day in and day out.

“It’s an honor every day,” Samuelsson said. “Every day when you see that logo on your jersey, you go out there and want to pause for a second and realize it’s something special.”