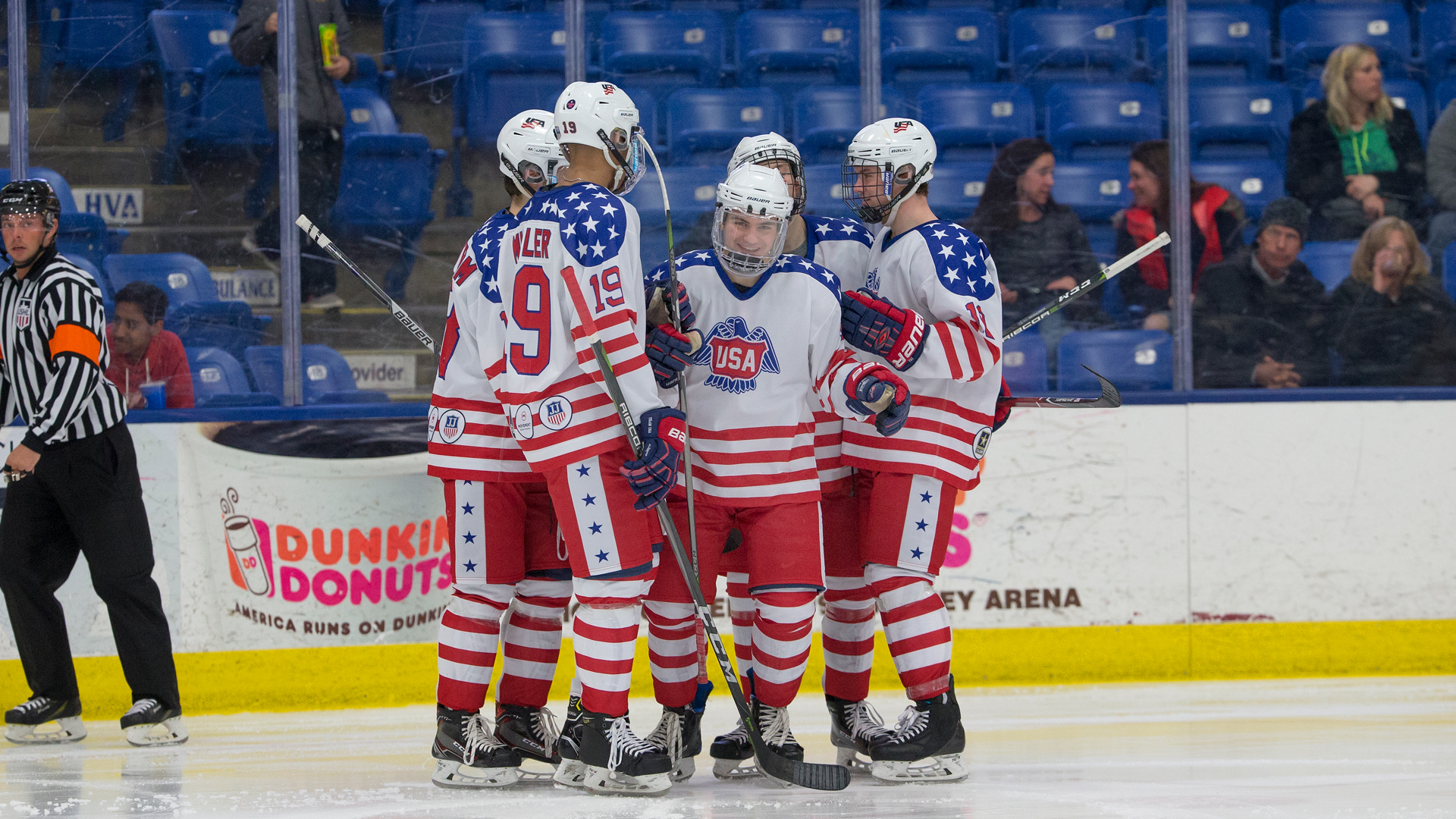 PLYMOUTH, Mich. – Jack Hughes (Orlando, Fla.) and Jake Wise (Reading, Mass.) each tallied twice for the U.S. National Under-18 Team in its 8-4 win against the Chicago Steel on Saturday night at USA Hockey Arena.

Jack Hughes (Orlando, Fla.) scored his 32 goal of the season at the 1:32 mark of the first period to give the U18s the early lead. Hughes finished off a tic-tac-toe passing play from linemates Jonathan Gruden (Rochester, Mich.) and Oliver Wahlstrom (Quincy, Mass.).

Bode Wilde (Birmingham, Mich.) extended the Team USA lead with a power play tally at the 14:51 mark of the first period. Wilde wristed a shot from the slot after Gruden fed him a cross-ice pass to earn his second assist of the night. Alex Turcotte (Island Lake, Ill.) also earned an assist on the play.

Chicago opened the second period with two goals cut the lead to one before Cole Caufield (Stevens Point, Wis.) tallied at the 5:10 mark to widen the lead. Joel Farabee (Cicero, N.Y.) and Jake Wise (Reading, Mass.) earned assists on the play.

Wise gave Team USA a two-goal lead with a rebound tally at the 11:05 mark of the period off a shot from Caufield. Samuelsson picked up his second assist of the night on the play.

Following another Chicago tally, Hughes tallied his second of the night on the power play after beating Chicago goaltender Justin Robbins with a wrist shot through traffic. Cam York (Anaheim Hills, Calif.) and Wahlstrom assisted on the power play tally.

Wise picked up his second of the night :55 into the third period after collecting the puck behind the net, circling to the front of the net and firing a shot to the top left corner of the net. Farabee earned his second assist of the night on the goal.

After Chicago tallied its fourth goal of the game, Gruden capped the U18s scoring with a between-the-legs shot on the power play to bring the game to its final of 8-4. Hain and Turcotte assisted on the goal.

Spencer Knight (Darien, Conn.) picked up his second win of the weekend and 24th of the season after making 21 saves for the U18s. Josh Graziano (Williamsville, N.Y.) also made one save in the third period in relief of Knight. Robbins made 35 saves for the Steel in the loss.

The U18s close out USHL play next Friday when Youngstown comes to USA Hockey Arena for a 7 p.m. ET matchup. Tickets for all Team USA games can be purchased at USAHockeyNTDP.com/Tix.