For Spencer Knight, Love of Goaltending Started With Equipment 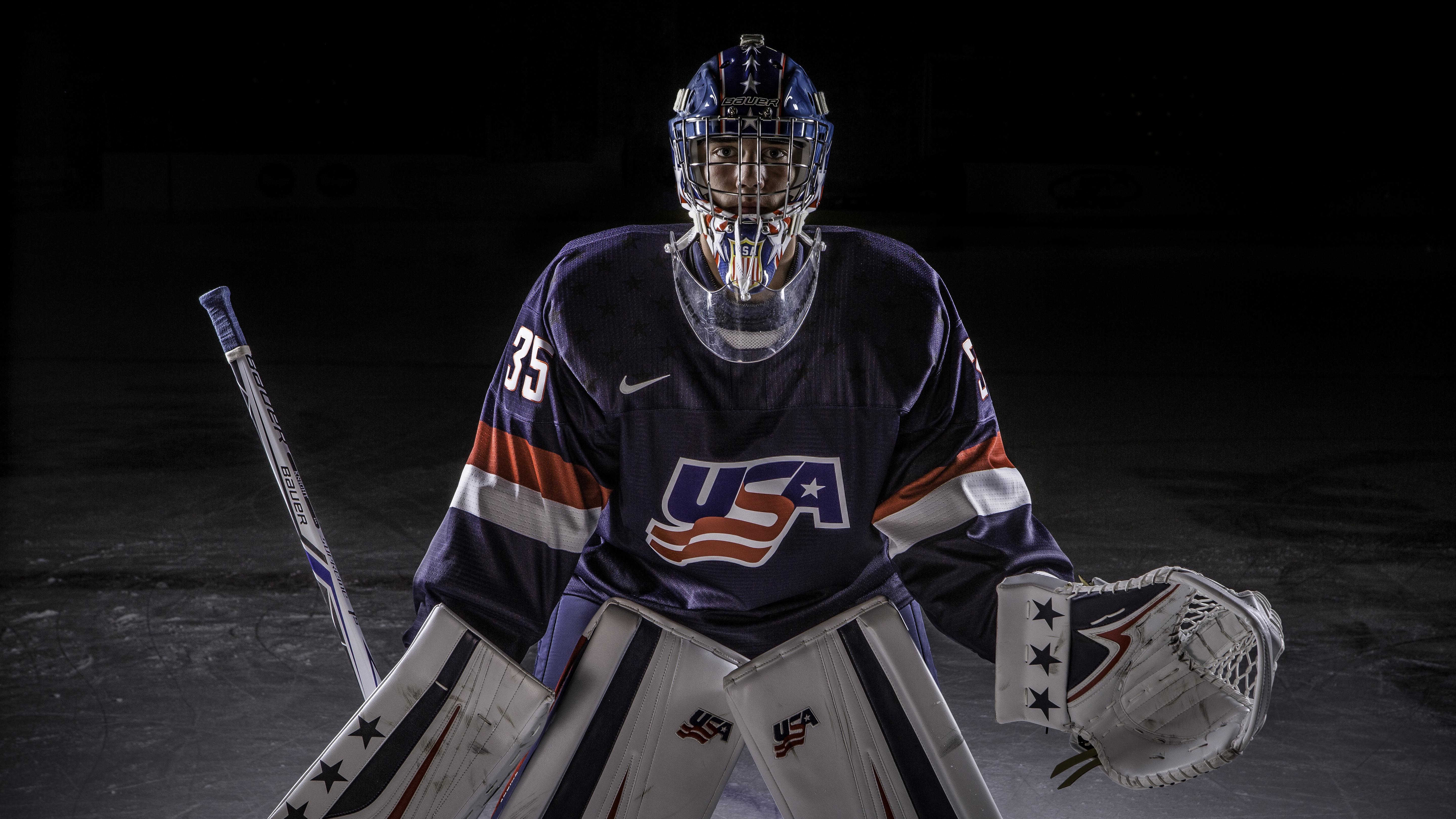 There is a unique design on the back plate of USA Hockey National Team Development Program goalie Spencer Knight’s helmet. It comes from a nickname that he earned many moons ago during his early playing days.

“This one, I have all the USA stuff on it,” said Knight on his helmet design. “The only thing I have on it that is mine is on the back plate and there is a squid. He has been on all my helmets so far. One of my old coaches called me squid for some reason. I think it’s the long legs.

“I was thinking of all kinds of things to put on my helmet and one day, it just came to me. It has kept going and it’s still there. I don’t think he is going anywhere.”

For Knight, it was all about the equipment and a certain New York Rangers player that really sealed the deal on him becoming a goaltender.

“I started playing goalie around 10,” explained Knight, who now stands in at 6-foot-3 and 193 pounds. “I would be lying if I told you I switched because I didn’t like the equipment. I loved the equipment — it was really cool.

“Growing up, I would always watch the Rangers and Henrik Lundqvist. Watching him make big saves and he would bring everything to a halt. I realized that it was a position where you can make and break the game. You have to be relied on and I really enjoy being that go-to guy.”

The Darien, Connecticut, native jumped into the sport of hockey when he was just 2 years old. He credits his parents — Chris and Lilly — in helping him with his love of the game.

“I started playing at our local rink, getting to skate around the cone,” recalled Knight. “My dad was one of the coaches out there. My dad put me in skates and had me try it. I loved it from there. My mom and dad played hockey in high school but no one was very serious about hockey until now.

“It’s definitely different for me now since I have switched positions. At the time, it was all about scoring goals and being with your friends. It was different from all the other sports. I really liked the speed of it. It’s hard to describe but when you are on the ice, it’s a whole different world and you have some freedom.”

Knight discovered quickly just how tough the transition could be especially for a goalie. After all, he played at a prep school last year and now is playing against teams both international and in the United States Hockey League.

“You have to be smart in your game and you really have to trust your training,” Knight said. “You are here for a reason to play with these guys. You have to stick to your fundamentals and that foundation that you have built.”

One of the fundamentals that Knight credits for his success this season is his one-on-one time with NTDP goalie coach Thomas Speer. It has really allowed him to continue to work on his skill set.

“Goalie time is really important,” said Knight. “Over the long season, you can develop bad habits because you are playing so much and you may not realize it. Getting that goalie time, you can go back to your foundation and build on it. You can implement that strong foundation that you can rely on, whether you are having a good day or a bad day.”

Getting that goalie time, you can go back to your foundation and build on it..

This is just one of the reasons behind the tremendous success that the Under-17s have experienced on the ice this season, especially with Knight between the pipes. It’s more than just the three international tournament wins — there is something special about this group.

“We won the three international tournaments but that just doesn’t come out of the air,” said Knight. “It starts with our coaching staff that has implemented a system that is just amazing. This group of guys in the locker room is great and we really have a tight bond. That really translates on the ice and that is where it starts.

“We practice really hard every day and everyone is challenging each other. It is a constant competition and I think that is why we were able to succeed on an international stage as we just kept pushing each other. There is so much skill on the offensive side and sometimes I just sit back in awe.”

He has definitely had that “awe” moment happen a few times during practice this year.

“It happens a lot and sometimes when you are the goalie, you are a victim of that but it’s still pretty cool. It can be frustrating in practice, especially with how skilled they are and how they work together as a team,” said Knight. 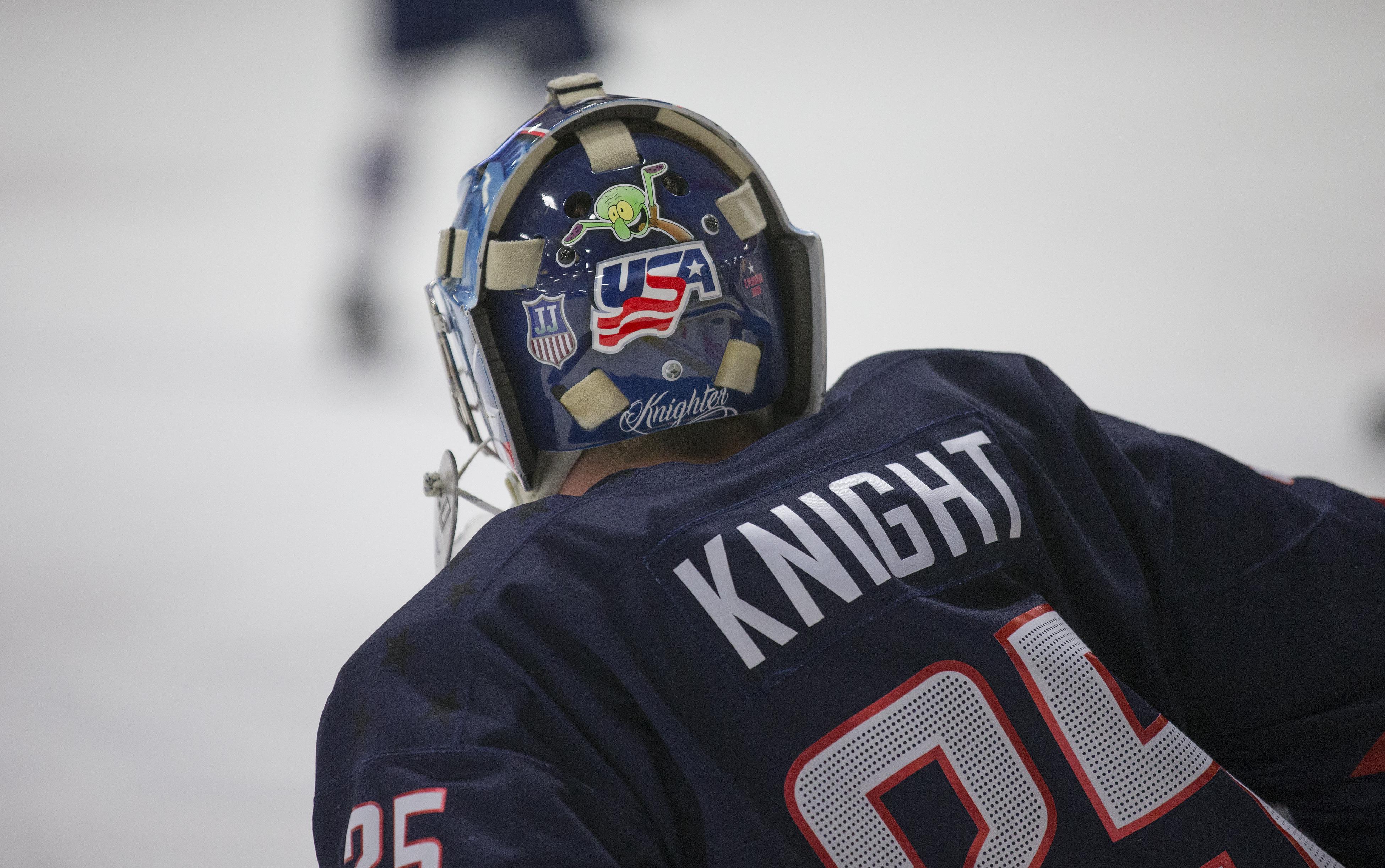 Knight earned a call up to the Under-18 team in late February. It was a very special moment for him. He understands the responsibility that has been bestowed to him, especially with the end of the season approaching.

“Once I got the call up and it really sunk in that I would be playing for the U18s, it was an honor,” he said. “It’s cool that the coaching staff and everyone here has that much trust in me. Playing with the older guys, they push you a lot too. It will make me a better player. You have to enjoy it.

“If I get a chance to represent my country at the U18 level, I would love to win a gold medal. This is really big for the older guys — they have been working on this for two years and I have been here for a little over a half year. I want to do everything in my power to help the team win and get that gold that they have been working towards. I want to keep getting better and focus on one day at a time.”

It makes wearing the colors of his country even that much more special.

“It’s a big honor,” said Knight. “Not everyone gets a chance to represent your country and to do it in the sport that you love the most is pretty cool. It’s something that I have dreamed of since I realized you could play hockey for your country. I remember the first time I heard about this program [13 years old] and I was at a rink in Boston and people were talking about it. Ever since that day, this is where I wanted to end up for my U17 and U18 year. To be here now, it’s pretty cool and I’m not taking it for granted.”