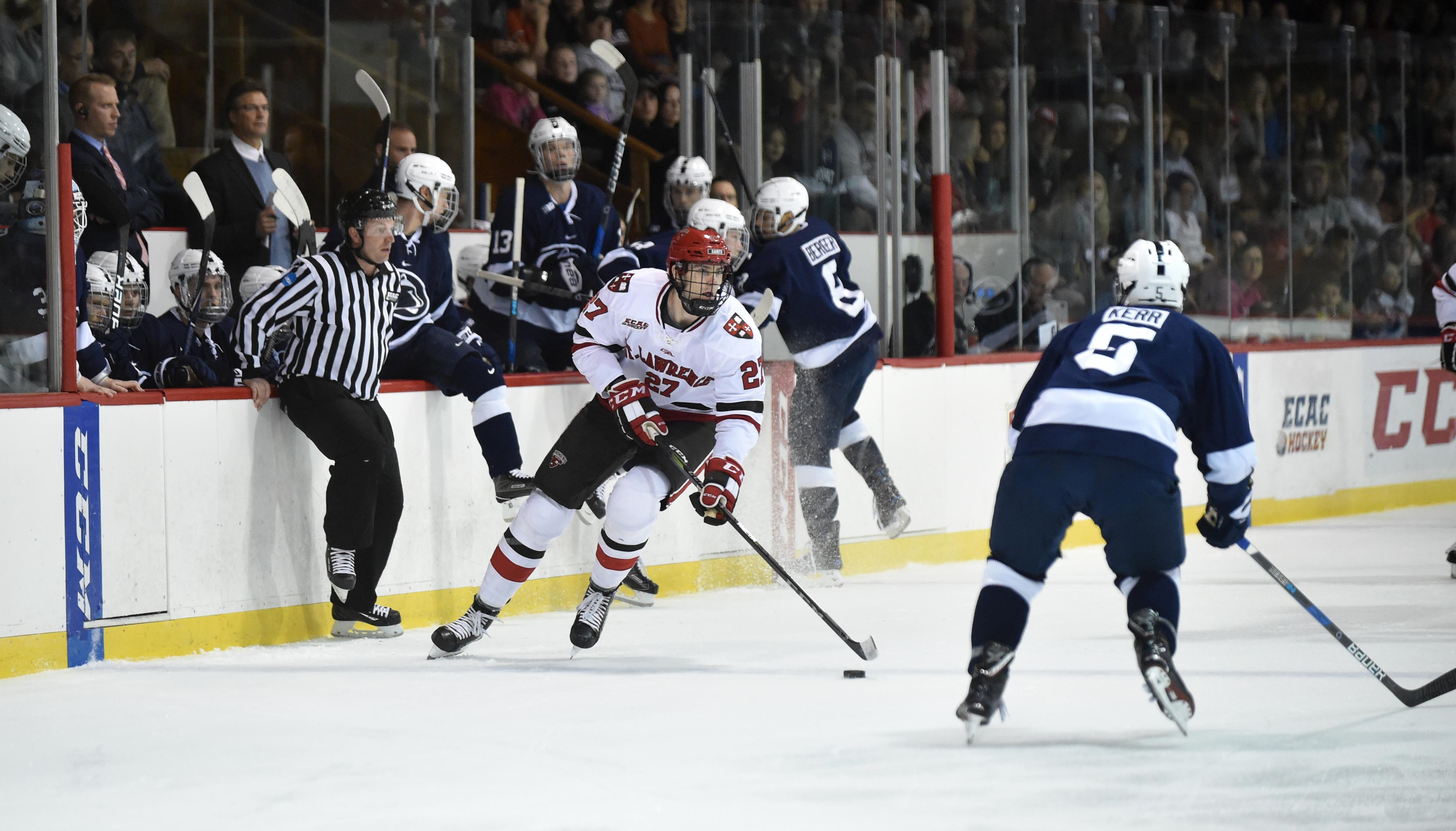 Standing six-foot-eight-inches, Keenan Suthers has been a valuable member of a lot of different sports teams.

He got into basketball early on, as both of his parents played in college. It wasn’t until his uncle suggested he play hockey that Suthers made a debut in the sport, and from that moment on, the family TV was always playing a hockey or basketball game. But despite his basketball background and playing on baseball, volleyball and track and field teams, Suthers would eventually focus solely on hockey.

“Growing up in Canada but having dual-citizenship, if you didn’t play hockey, it was kind of out of the norm,” Suthers said. “Once I started playing, I fell in love with it right away. It was an everyday part of my life.”

Suthers moved to Michigan to play with the Honeybaked AAA team in 2011-12. From there, he transitioned to the Compuware Bantam and 16U teams for the next two seasons. Serving as a multi-sport athlete, Suthers balanced a wide variety of practices and games until he was extended an offer to join USA Hockey’s National Team Development Program.

“You’ve done so much and worked so hard to get to that point, you’re not going to risk it with an injury in some other sport,” Suthers said. “I was good at basketball, but an opportunity to play with the (NTDP) was a super easy decision.”

He made his debut for the NTDP in Ann Arbor, Michigan, during the 2014-15 season. While with the U17s, Suthers played in 53 games, with four goals and seven assists for 11 points. He also appeared in six games during the IIHF Under-18 World Championships, where he scored one goal to help the team to a second-place finish.

The next season, Suthers competed with the U18s in 51 games, replicating his season total of four goals and seven assists from the previous year to match an 11-point total. That same year, the U18s won gold at the 2016 Five Nations Tournament in Switzerland.

“Going overseas, playing internationally and just being able to represent the United States at that level is pretty cool,” Suthers said. “Definitely when we were in Switzerland, when we won the Five Nations tournament, that was the coolest for me. Beating the other top nations, in our U18 year and we were all super close, it just meant a lot to each other… The entire two years are something special and those guys will always be my friends for the rest of my life.”

After finishing his two years with the NTDP, Suthers remained in the USHL for another season, splitting time between the Muskegon Lumberjacks and Dubuque Fighting Saints during the 2016-17 season. While with the Lumberjacks, Suthers played in 25 games with five goals and four assists for nine points before transitioning to Dubuque for 34 games, with six goals and 10 assists for 16 points.

From there, Suthers decided to leave the USHL and play for St. Lawrence University, which, for him, wasn’t a difficult decision to make.

“It was pretty easy,” Suthers said. “I came on my visit and campus was beautiful, you hear a lot about the alumni program and all the opportunities you’ll have once you leave, and I came in right away and played a ton and thought I had a good freshman year. I’m excited to keep playing for this team and get better. The coaching staff here helps everyone, but for me personally, they help me work to get to the next level, which is my main goal.”

In his first season at St. Lawrence, Suthers made an appearance in 36 games, scoring two goals and four assists for six points.

On a team laden with underclassmen — 11 freshmen in Suthers’ class, to be exact — a tough schedule, featuring six of the 16 teams currently slated in the NCAA Tournament, was a huge factor in helping the freshmen mature quickly. For Suthers, facing teams like Cornell, Clarkson and eventual ECAC Tournament champions Princeton, couldn’t have been better for the team’s development and growth. 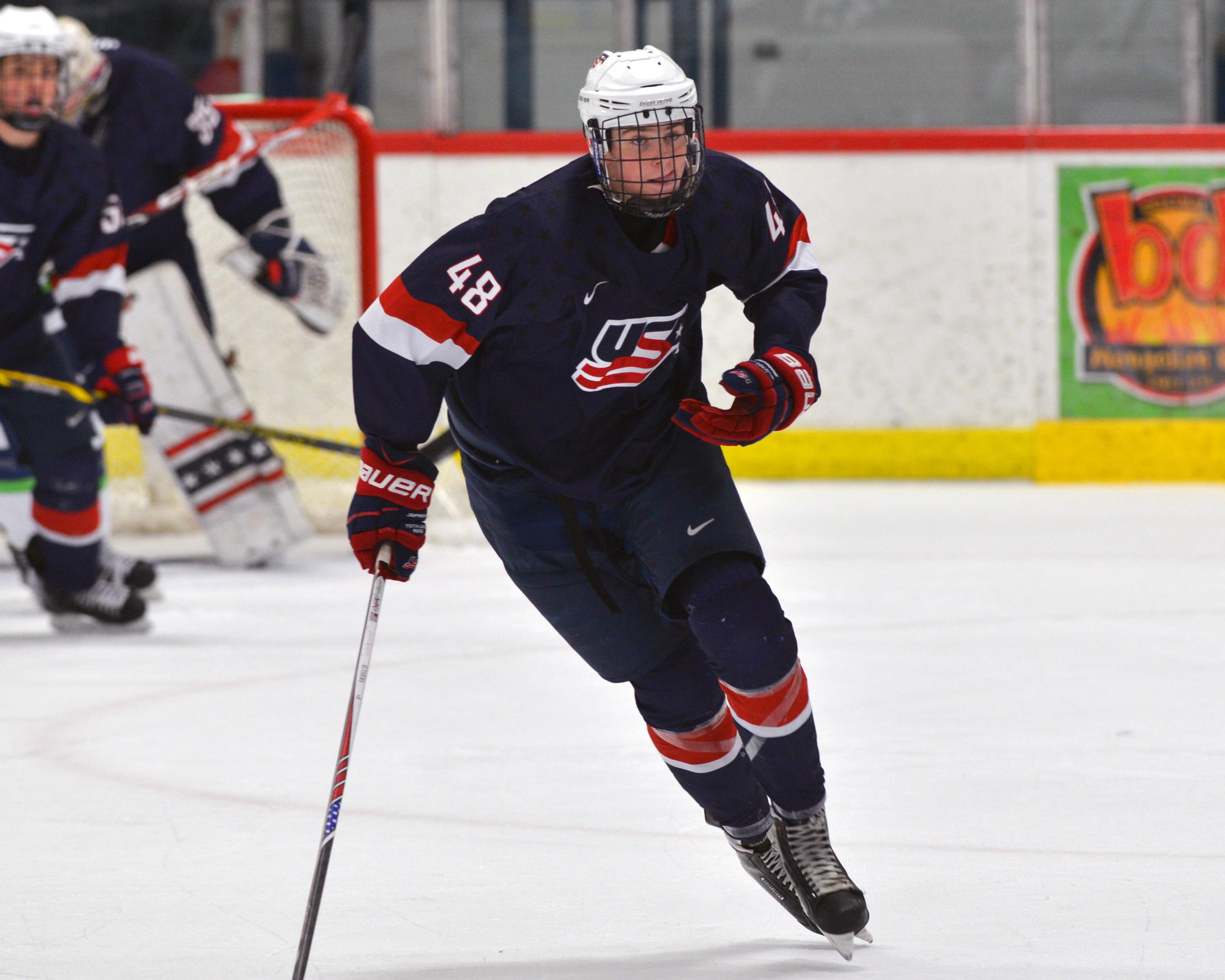 We had so many underclassmen that playing a schedule like we did, it really helped us to mature quickly...

I think in the long run it’s really going to pay off.

“We had so many underclassmen that playing a schedule like we did, it really helped us to mature quickly, a lot quicker than most other freshmen on other programs,” Suthers said. “With there being so many of us, I’m definitely excited for the upcoming years because we’re just going to be that one step ahead, mentally and physically with the schedule that we had. I think in the long run it’s really going to pay off.”

Looking forward, Suthers and the young St. Lawrence team hopes to take their game to the next level by using the valuable first-year experience to come back next season and make an impact in ECAC play.