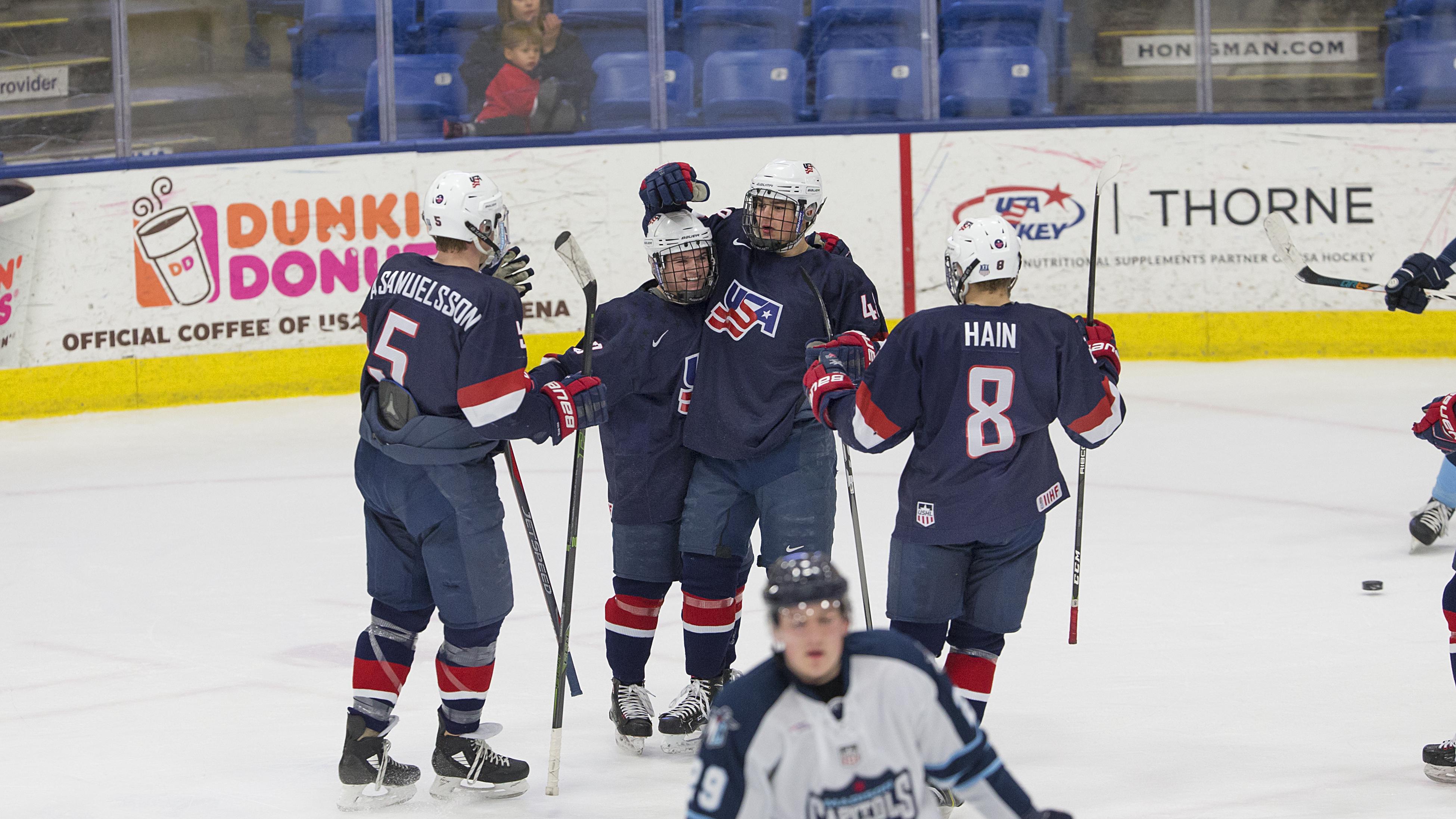 PLYMOUTH, Mich. - Team USA clinched its spot in the USHL playoffs tonight following a 10-3 win by the U.S. National Under-18 Team against the Madison Capitols at USA Hockey Arena.

Team USA is heading to the playoffs for the first time since the 2011-12 season. This marks the third time the combined Team USA will compete in the Clark Cup Playoffs.

Our guys realized they had an opportunity to do something unique in the history of this program and leave their mark,” said Seth Appert (Cottage Grove, Minn.), head coach of Team USA. “You saw the combination of this unique opportunity and the compete level that these guys have in the result here tonight and really throughout this entire season.”

The U18s struck first with a goal at 2:51 in the first. Jake Wise (Reading, Mass.) saucered a pass through traffic to Cam York (Anaheim Hills, Calif.) who shot the puck top-shelf past the goaltender’s glove.

Farabee scored shorthanded at 10:29; he stole the puck, kicked it to his stick and scored to give Team USA a 2-0 lead.

At 12:42 in the first, Alex Turcotte (Island Lake, Ill.) drove the net and made a backhand pass to Gavin Hain (Grand Rapids, Minn.) in the slot who one-timed it into the net. Ty Emberson (Eau Claire, Wis.) also assisted on the goal.

At 6:39 in the second, Wise passed to Farabee in the slot where he made a kick pass to Caufield who put it in the net.

Farabee scored his second of the night after he put the puck on net and it went off a Madison defender and past the goaltender. Adam Samuelsson tallied an assist on the play to help the U18s to a 6-0 lead.

The Capitols got one back at 9:23 in the second while shorthanded to make it 6-1.

The U18s struck again at 18:10 in the second when Mattias Samuelsson (Voorhees, N.J.) put home the rebound off a shot from Hughes.

Less than a minute later, at 18:51 in the second, Hughes netted a goal after faking out a Madison defender. Jonathan Gruden (Rochester, Mich.) and York assisted on the goal as Team USA took an 8-1 lead.

The U18s continued their scoring frenzy at 5:29 in the third as Gruden scored with a shot five-hole that trickled past the goaltender. Farabee and Mattias Samuelsson assisted on the goal.

Madison scored twice in the third to make it 9-3.

Tyler Weiss (Raleigh, N.C.) scored at 17:47 in the third; Turcotte and Spencer Stastney (Mequon, Wis.) assisted on the goal to give Team USA a 10-3 victory.

The U18s will be back in action tomorrow night (Friday, March 16) at USA Hockey Arena at 7:05 p.m. ET as they look to sweep their weekend series against Madison. Tickets for this and every NTDP game are available at USAHockeyNTDP.com/Tix.

2018 USHL Clark Cup Playoff ticket packages will be announced at a later date.