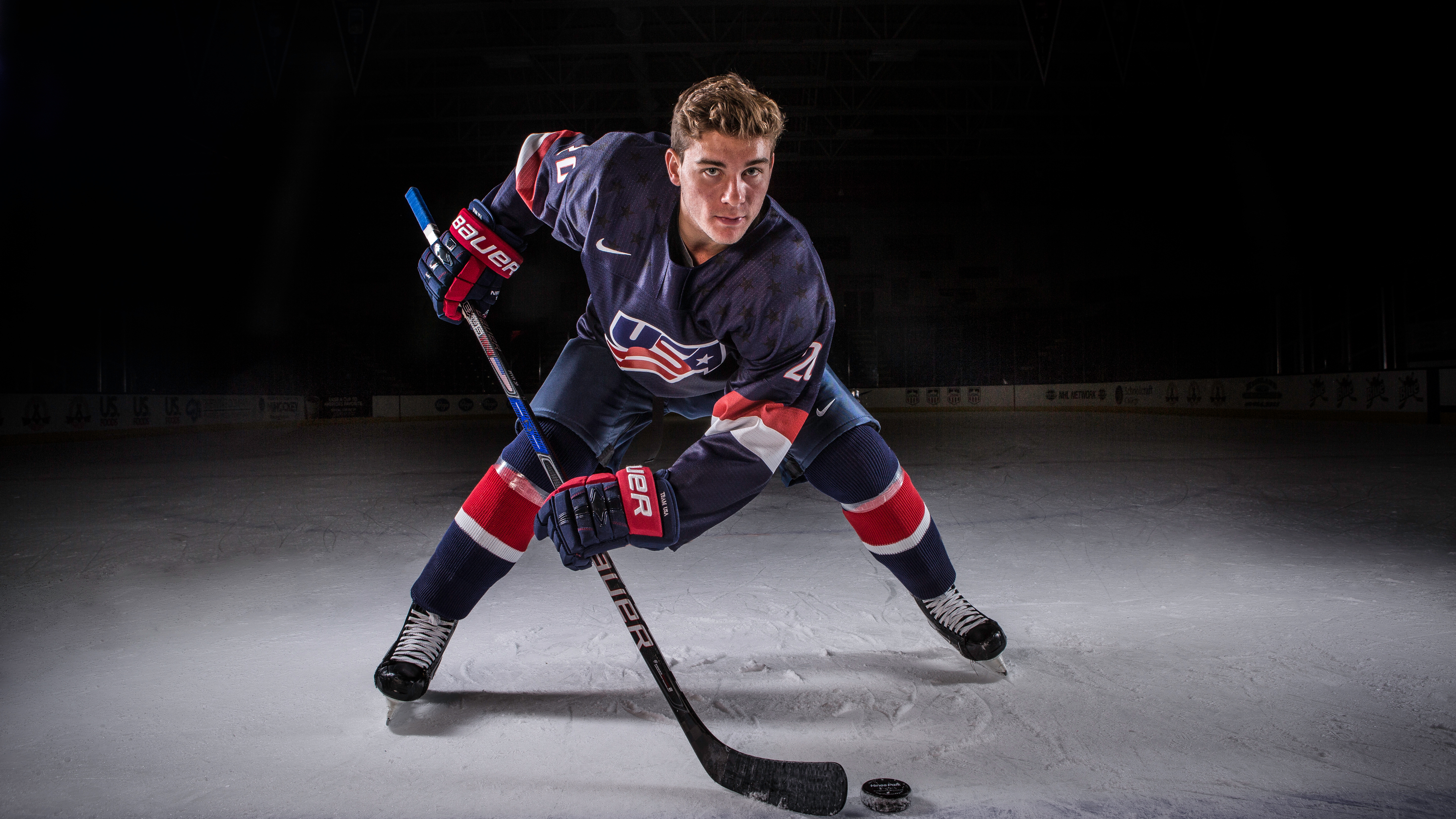 Most young hockey players have someone they look up to in the National Hockey League. Jake Pivonka was fortunate enough to be raised by one.

Michal Pivonka played for the Washington Capitals from 1984-2000. During his career, he appeared in 825 games and totaled 599 points.

“From a role model standpoint, I have always looked up to him for everything,” said Jake on his dad. “Once I picked up hockey, he took me under his wing and basically helped me develop the small skills that would help me become a better player. He helped put that mentality in my mind that it will not be easy — whether it was some of the training we did with him when I was a kid or listening to him, I think it better prepared me for this program with the lifting and the schedule for how it will be later on, for college hockey or professional hockey.”

There is one little life lesson that Pivonka still remembers to this day.

“My dad taught me a lot about consistency, whether it is every day doing the small things such as stickhandling or shooting, or doing the little things that will help you get better at the end,” he said. “You may see the results at the end of the first week, or first month, or first year, but you have to trust that and it will help at the end.”

This advice came in very handy for Pivonka, especially after his first year with USA Hockey’s National Team Development Program. This season, the 6-foot, 198-pound forward has seen how the hard work he put in last year is helping in his Under-18 season.

“This year, from a team perspective, is how we have come together and won so many games together this year,” he said. “Personally getting used to that pace of the USHL and getting stronger each day has really helped this year with my development.

“I wouldn’t say any particular event made it happen, but we just decided as a team, that’s enough. It’s time that we take accountability and start winning. We need to use the skill we have.”

He is also working with a new head coach, Seth Appert, who also has brought some key discussions to Pivonka and his U18 teammates.

“What has really resonated with me is that he talked about work before skill,” said Pivonka on his coach’s advice. “As a team, we have the best players in the United States so there is no shortage of skill. It won’t work if we all try to play as individuals and not work together. We have been implementing that team first mentality.

“We get pretty competitive out there. There are times that we are going after one another, probably with a little hostility in you. It’s for the betterment of yourself and your teammates. You want to push the guy next to you as far as you can.”

The Naperville, Illinois native and his U18 teams showed that competitive side en route to capturing the Five Nations Tournament at USA Hockey Arena in early February.

“It was big,” said Pivonka on the tournament title. “The most important game was that Russia game, especially coming back from being three goals down [Team USA won 5-4]. It was something special. You can see from the video how excited everyone was and that we were all into the game. There wasn’t one guy taking the easy route.

“Finally, beating Finland at the end, and relaxing and realizing that we had won was just a great feeling. For our team, knowing that we could do it and beat those other teams and top countries.”

Pivonka is hoping to take some very important lessons away from the tournament win and apply it to the rest of the season.

“The biggest thing we realized is how much we have to play together. We can’t have one guy stray off. It has to be everyone on board and working towards the same goal,” he said.

The feeling of wearing the colors of his country is a special one for Pivonka, not just in international tournaments but every single day.

As a team, we have the best players in the United States so there is no shortage of skill. It won’t work if we all try to play as individuals and not work together.

Another incredible moment for Pivonka was when he signed his National Letter of Intent in mid-November to continue his hockey career at the University of Notre Dame next season. Though the LOI made it official, Pivonka had verbally committed to Notre Dame as a high school freshman and has been dreaming about it ever since.

“I really enjoyed the [Notre Dame] coaching staff,” Pivonka said. “They were sincere and knew what they were talking about. The campus is second to none and it’s really close to home as well. Being able to have my parents, especially my dad, be able to come see me especially with as much as he has helped me out with hockey.”

This experience will be even more special as Pivonka will be heading to South Bend, Indiana with one of his current U18 teammates, Spencer Stastney. The duo also played together with the Chicago Mission 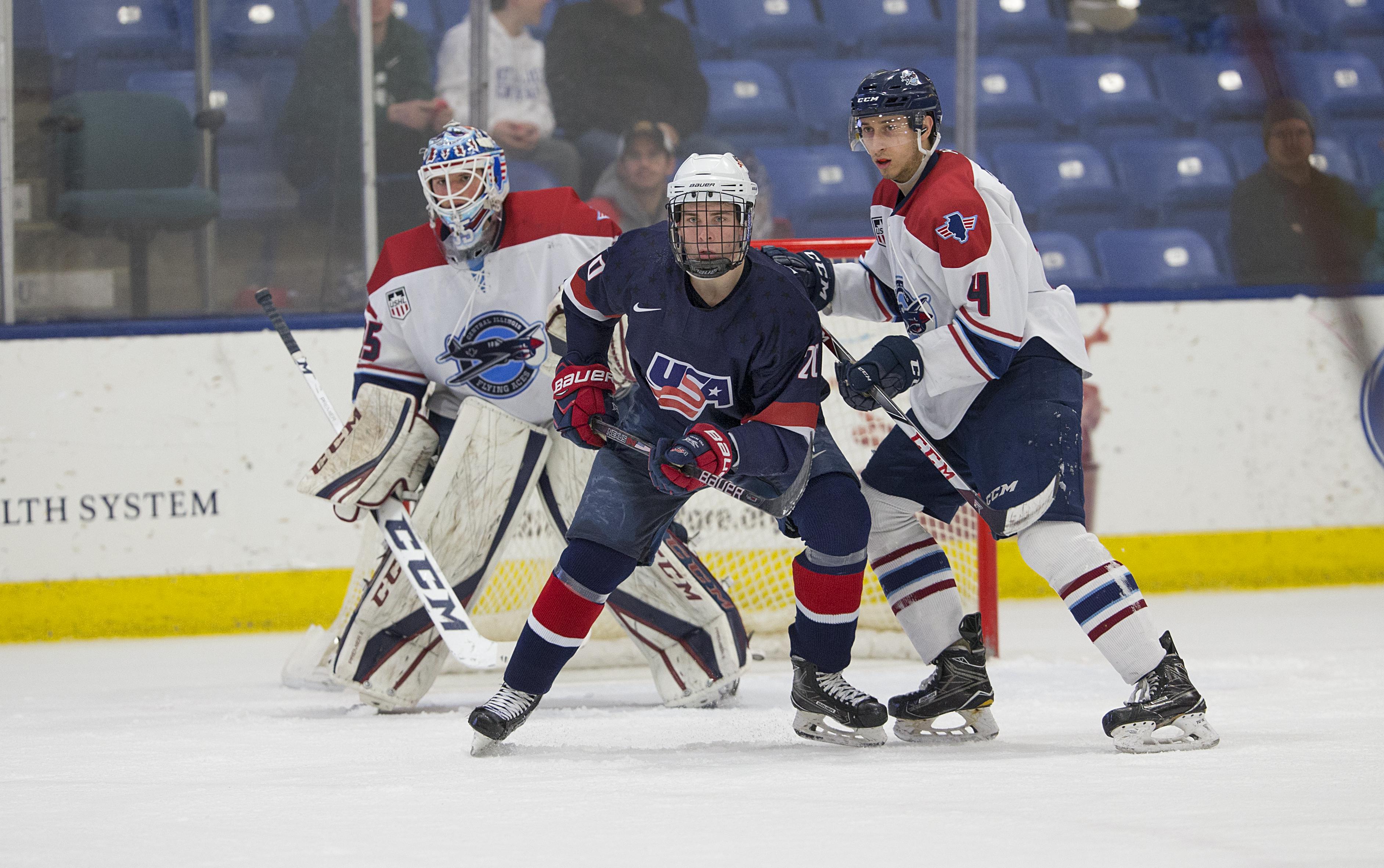 “We have been playing together for seven years and now go to college together,” he said. “It will be really good going in, obviously as a freshman, it will be a little strange to get used to the college lifestyle. Having him along the way will be good and we can figure stuff out together.”

Pivonka already has a taste of college hockey, playing against the Fighting Irish on Oct. 1. Despite the 4-3 road loss, it was a memorable experience.

“I remember the atmosphere of college hockey especially since it was our first college game,” he said. “It was something new. I was a little nervous at first but once you get into it and you realize that it’s just hockey, you are fine. Having the band there and the noise was great. It wasn’t too nice on the ice but once the game was over, it was good.”