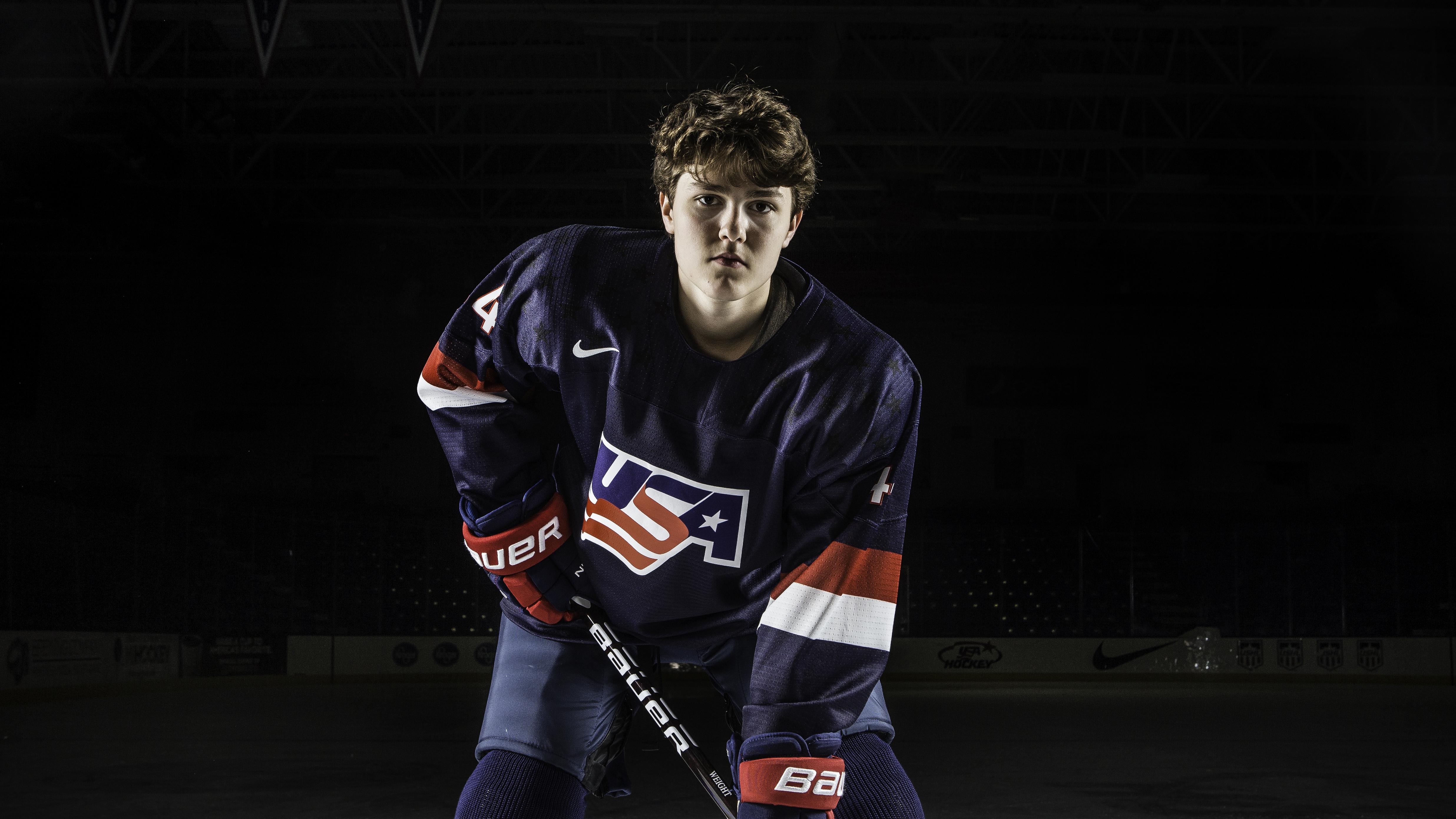 For Danny Weight, it was a very emotional moment for him and his parents, Doug and Allison, when he learned that he had been selected to join USA Hockey’s National Team Development Program last spring.

After all, it was the moment a childhood dream was realized.

“I was called into the room with Mr. [Scott] Monaghan [senior director of operations] and Coach [John] Wroblewski,” said Weight. “It was super emotional for me when I was invited to join the team. My dad played on USA teams and it has been something that I have [worked] towards for the last 10 years. It has always been a dream of mine and I was so happy to join the team.

“I had to call my dad and tell him the news. It was a good moment for us. I worked so hard for this opportunity and felt that I had a good top 40 camp. It was such a surreal moment.”

Weight’s hockey days started while his dad was still playing for the St. Louis Blues in the National Hockey League. The Blues were one of six different teams Doug Weight played for from 1991 until he retired in 2010, appearing in over 1,200 games and scoring more than 1,000 points.

“I started skating with my dad when I was 4, but I didn’t start playing hockey until I was 6,” said Danny, born in May 2001. “I knew I wanted to do what my dad did. I started playing for what is now known as the Jr. Blues and just loved the sport. It is so unique.”

Weight was 10 when his dad retired from playing the game as a pro. More than anything, he appreciates the little lessons his dad has taught him along the way.

“I realized how hard it was [to be a pro player]. My dad didn’t put one bad ounce of food in his body when he was playing. He was always working out and trying to get better,” he said. “He would tell me how hard it will be. The first time I walked into the Blues locker room, I knew this is what I wanted to do. He was definitely a good role model and something that I looked up to.”

With his dad currently serving as the head coach of the New York Islanders, Weight has an amazing resource who can speak from a father’s, a player’s and a coach’s perspective.

“Whether he has been a coach or a player, he always tells me how to prepare and improve in all areas,” said Weight, a 5-foot-11, 187-pound forward. “He told me to trust the process and to keep at it. He has been the one to help me watch video or teach me the game. He coached me a little bit, but he wanted me to learn the game.”

One of Weight’s favorite players from when he was growing up was current Islander John Tavares, which began during Doug Weight’s three-year tenure in New York at the end of his career.

“John Taveres was in his rookie season and he moved into our house for three years,” Weight said. “It was fun to have him there. We definitely played mini-hockey, street hockey and video games. He would beat me but we always had fun. He made me realize how much work you have to put in to get to the NHL.”

Weight’s mother was a former collegiate tennis player at the University of Arizona. As another elite athlete in the family, she has played a huge role in her son’s hockey career, including making the move to Plymouth, Michigan for his first year with the NTDP.

He made me realize how much work you have to put in to get to the NHL.

“She was a great tennis player,” Weight said. “I really got good genes from both my mom and dad. She teaches me work ethic and the training it takes to get to the next level. It’s been great to have her here. I have two sisters at home but she is here. She definitely has been cooking for me.”

For Weight, it has been a difficult transition at times with the NTDP. He has definitely learned plenty about himself and can already see the difference in his game since he arrived in late August.

“You are definitely playing against bigger, faster and stronger kids, especially in the [United States Hockey League],” explained Weight. “It was definitely a transition, especially with the training. I have worked on my speed and strength. I’m still not where I want to be but I keep working and hopefully, I will get stronger and faster.

“The shooting room is unreal. I go in there every day and work on getting better. It is definitely helping. The workouts in general, where it is pushing a sled, or chin-ups, we are working out three to four times a week, and I can see the difference.”

Weight and his Under-17 teammates are coming off capturing the Five Nations Tournament in Finland. All told, the U17s went undefeated in all three international tournaments this season with a 14-0-0 (W-L-OTL) record, capturing the Under-17 World Challenge in early November and the Under-17 Four Nations in December. 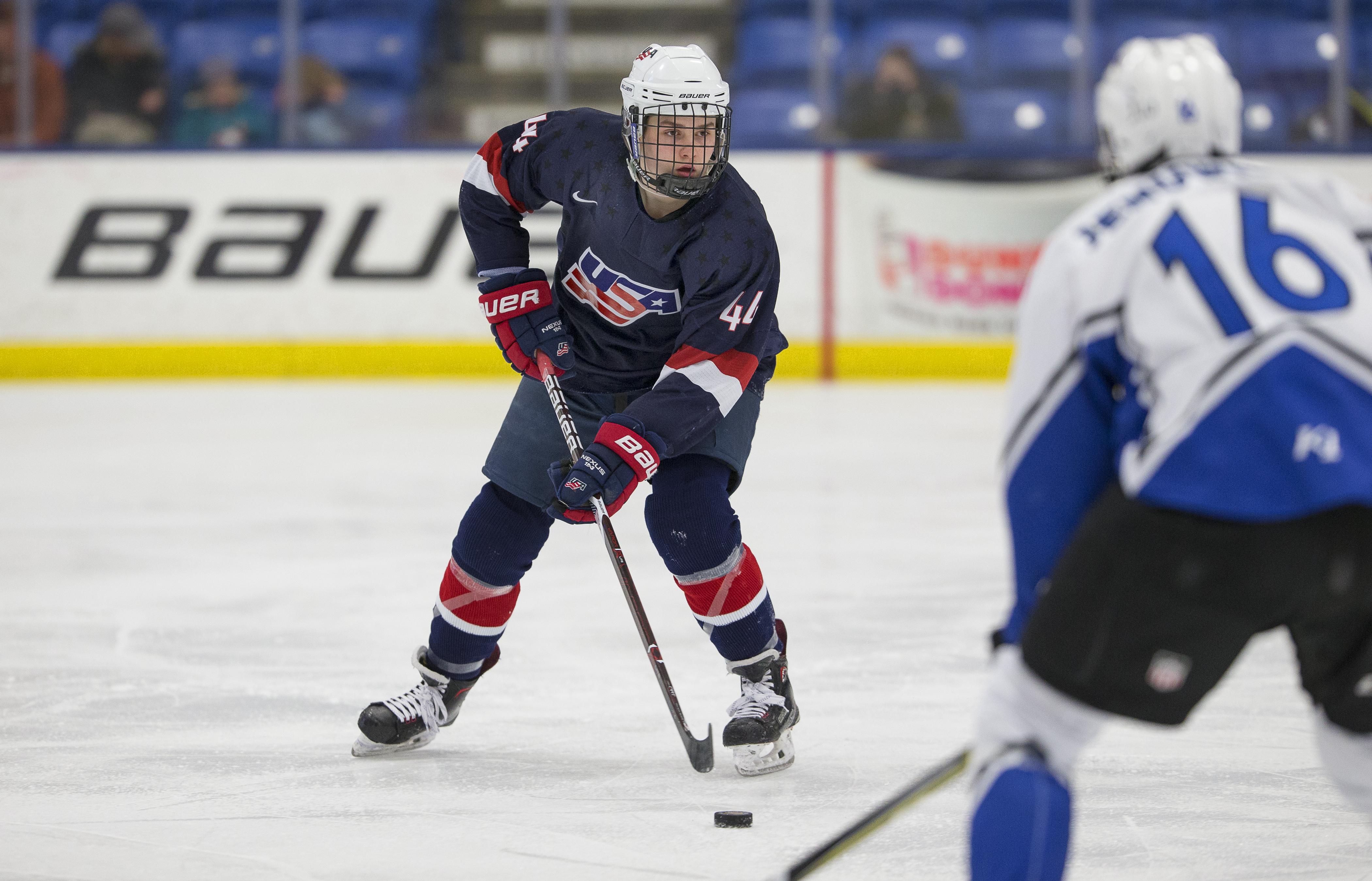 “It was awesome at the Five Nations,” said Weight. “It was our third tournament win of the season and it was special. It is unprecedented to go undefeated in international play. It was hard not to think about that when we were in Finland but it was definitely in the back of our mind. We really wanted to win that tournament.”

Weight believes there is something special about this U17 squad.

“We have a tight group,” he said. “We have bonded since we got here in August. I credit the coaches and [off-ice conditioning coach] Kirk Culik, and of course, the team activities at the beginning of the year in helping make that happen. Everyone is good and skilled. We have great players and we want to see everyone be successful. We want to win for each other.”

His tenure with the NTDP means the Weight family will need to find room on their wall for a second USA Hockey jersey. After all, Doug played for Team USA in the 1998 and 2002 Olympic Winter Games, three World Championships and the 1991 World Junior Championships, which makes wearing the colors of his country even more special for Danny.

“It means so much to me,” he said. “It’s such an honor and I didn’t know that until I was able to wear the jersey. I still remember the first game and seeing the USA logo and then, seeing the photos. To be able to represent your country, it's something that not everyone can do.”