The U.S. National Under-17 Team defeated the Czech Republic, 8-3 this morning in Finland to win the 2018 Under-17 Five Nations Tournament. The U17s went undefeated in all three of its international tournaments this season with a 14-0-0 (W-L-OTL) record.

"From day one this group has demanded excellence from themselves and their teammates," head coach John Wroblewski (Neenah, Wis.) said after the game.  "Going undefeated was never a goal. It's a byproduct of daily sacrifice and attitude. It's an honor to work with this team. They're great kids and all of their hometowns back in the States should be proud." 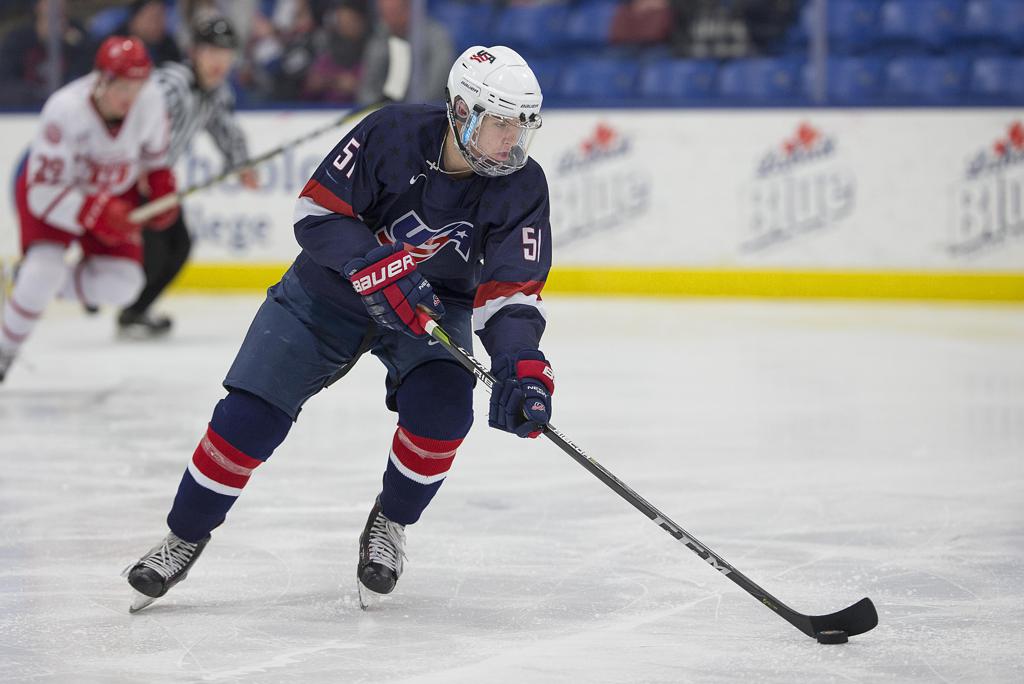 Judd Caulfield (Grand Forks, N.D.) opened scoring at 1:56 of the first period. Drew Helleson(Farmington, Minn.) sent a stretch pass to Caulfield at the blue line who skated it in and sent it over the glove of the Czech goaltender.

Cole Caufield (Stevens Point, Wis.) put the puck in from the left circle to give the U17s a 2-0 lead at the 4:48 mark of the first period.

The Czech Republic netted a power play goal at 8:54 of the first to pull within one.

Caulfield netted his second of the morning on a delayed penalty call at 2:07 of the second period.

Michael Gildon (Plano, Texas) netted his first goal of the game at 6:40 of the second, deflecting the puck in from Caufield.

Ryder Rolston (Birmingham, Mich.) gave the U17s a 5-1 lead at 9:57 of the middle frame, tapping in the puck from the right side of the net.

Alex Turcotte (Island Lake, Ill.) sent a centering pass to Gildon who tapped it in at 11:08 of the second period to give the U.S. a 6-1 lead.

Patrick Moynihan (Millis, Mass.) extended the U17s lead, 7-1, sending the puck into the back of the net from the slot at 6:19 of the final frame.

The Czech Republic answered back with a breakaway goal at the 6:54 mark.

Caufield netted his second of the game at 8:42 of the third period with help from Cam York(Anaheim Hills, Calif.) and Henry Thrun (Southborough, Mass.).

The Czech Republic added another goal at the 14:42 mark of the third to seal the game, 8-3.

The U.S. National Under-17 Team went undefeated in international play this season with a 14-0-0 (W-L-OTL) record through its three tournaments. The U17s also won the 2017 World Under-17 Hockey Challenge and the 2017 Under-17 Four Nations Tournament.

The U7s are back in action Saturday (Feb. 24) at USA Hockey Arena as they take on the Central Illinois Flying Aces in USHL play.