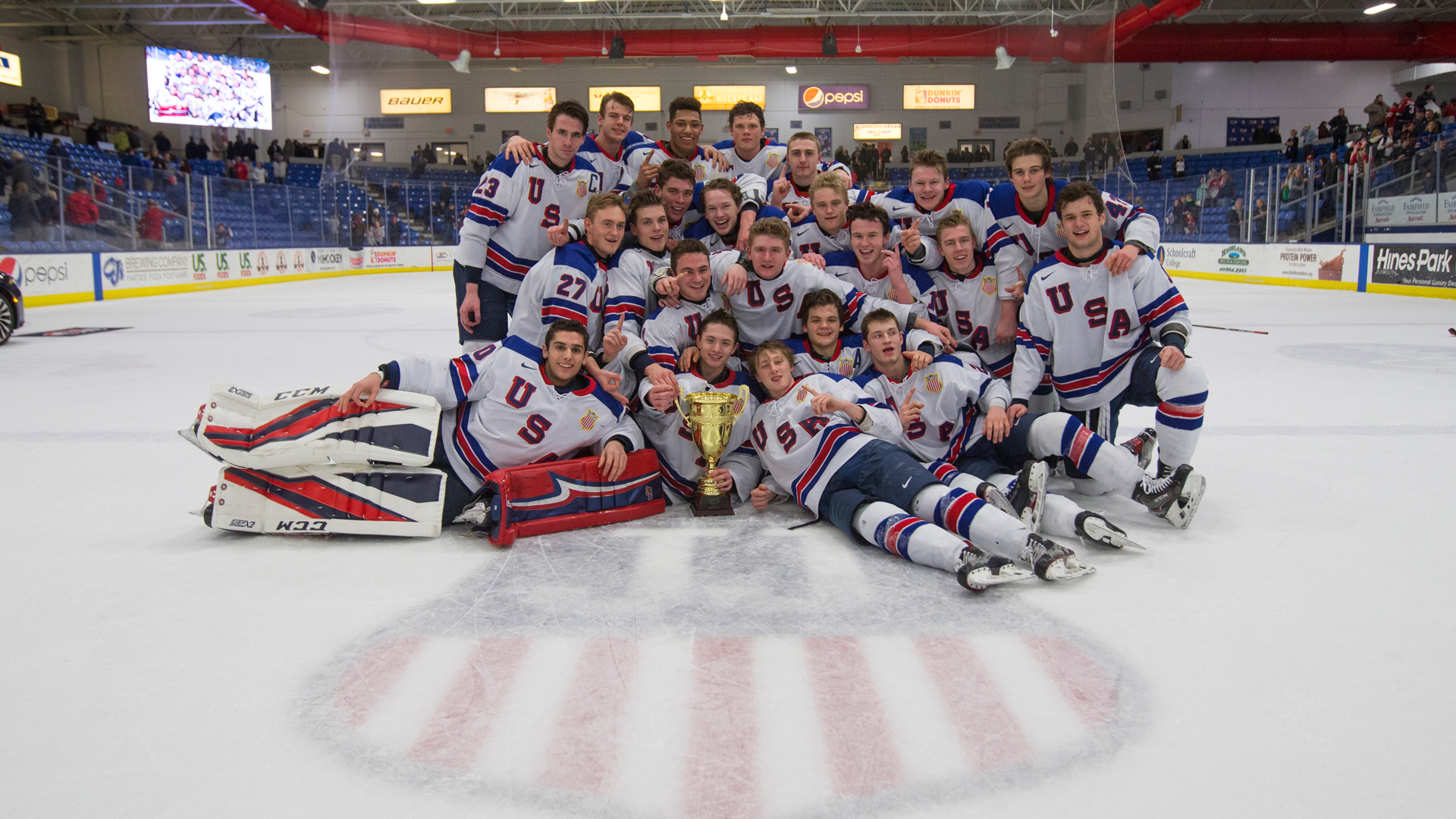 The U.S. National Under-18 Team defeated Finland, 4-0 to win the 2018 Under-18 Five Nations Tournament tonight at USA Hockey Arena.

Sweden defeated Russia today, 3-2 in both team’s last game of the 2018 Under-18 Five Nations Tournament.

Scroll down for game recaps

“It’s always good to win a championship,” head coach Seth Appert (Cottage Grove, Minn.) said after the game. “I’m really happy for our guys, they’ve worked hard for two years and haven’t had as much international success as maybe they’d like. I’m really proud of them.”

The first period ended with zeros on the board albeit not for a lack of chances on both ends of the ice.

Both Patrick Giles (Chevy Chase, Md.) and Finland’s Kappo Kakko both had breakaways in the first but were denied by each goaltender.

Jack Hughes (Orlando, Fla.) hit the inside of the goalpost but after review was confirmed the puck never crossed the goal line.

At 10:51 of the middle frame, Jonathan Gruden (Rochester, Mich.) put the U18s on the board. Bode Wilde (Birmingham, Mich.) shot the puck from the point and it rang off the end board where Gruden was able to knock it in. Jake Wise (Reading, Mass.) also added an assist on the goal.

Gavin Hain (Grand Rapids, Minn.) sent the puck over the shoulder of Finland’s Justus Annunen on the rebound to give the U18s a 2-0 lead at 3:15 of the third period. Jake Pivonka (Naperville, Ill.) and Ty Emberson (Eau Claire, Wis.) recorded assists on the goal.

Drew DeRidder (Fenton, Mich.) stood tall in net recording the shutout with 33 saves, including several in the last minute, with help from defensemen blocking shots, when Finland had a 6-on-3 man advantage.

The U18s are back in action Friday (Feb.23) at USA Hockey Arena when they play host to the Central Illinois Flying Aces in USHL league play.

NOTES: Team USA Captain, Mattias Samuelsson (Voorhees, N.J.) accepted the Five Nations Cup from tournament sponsor Hines Park Lincoln of Plymouth following the win … The U.S. was 0-2 on the power play while Finland went 0-3 … Finland outshot the U.S. 33-29 … Team USA went 3-1-0-0 (W-L-OTW-OTL) in the 2018 Under-18 Five Nations Tournament … The U.S. last won the Under-18 Five Nations in February 2017 I Sundsvall, Sweden … Russia, Sweden and Finland all finished the tournament tied for second place with (2-2-0) records, the Czech Republic finished in fifth place with a (1-0-3) record

After a scoreless first period, Sweden’s Oskar Bäck sent the puck past Russia’s Daniil Isaev at 5:09 of the second period.

Sweden regained a one-goal lead at 18:32 though, when Nikola Pasic put the puck past the Russian goaltender’s blocker.

Sweden extended its lead, 3-1, when David Gustafsson deflected Adam Ginning’s shot from the left point at 3:47 of the third period.

Ivan Morozov answered back for Russia at 6:13 of the third, sending the puck into the far netting.