Tyler Weiss netted the game-winner for the U.S.; Sweden defeated the Czech Republic in the first game Friday 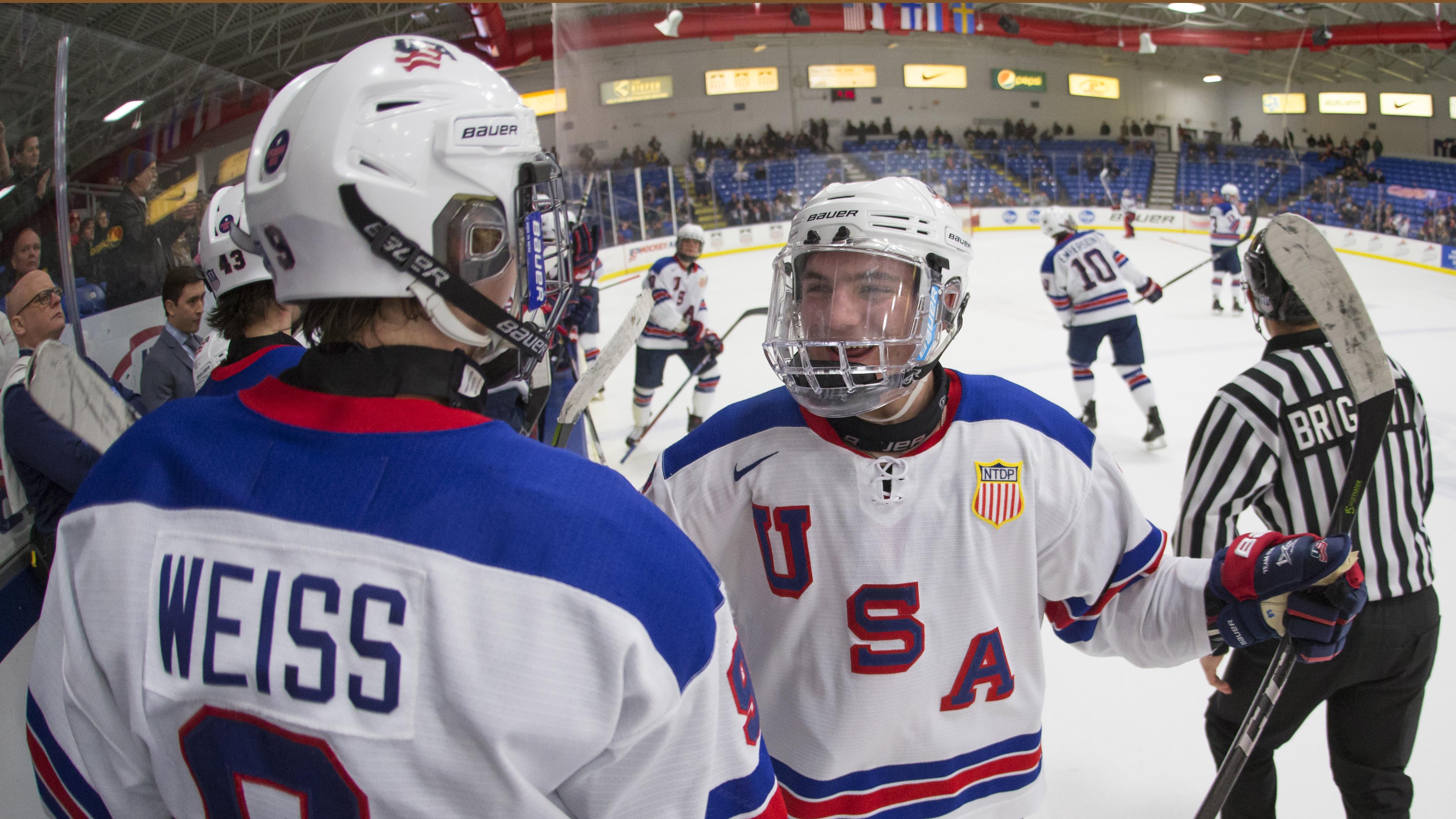 The U.S. National Under-18 Team defeated Russia 5-4. Jack Hughes (Orlando, Fla.) and Oliver Wahlstrom (Quincy, Mass.) had three-point nights in the victory with a goal and two assists a piece. Team USA outshot Russia 43 to 19 in its comeback win.

Sweden defeated the Czech Republic 4-1 in the first game of the Under-18 Five Nations Tournament Friday.

Scroll down for game recaps

Team Russia struck first on a two-on-one breakaway at 7:14 in the first. Ivan Morozov scored, and Kirill Marchenko and Andrei Svechnikov assisted on the goal.

Russia scored again at 9:46 in the first when Grigory Denisenko was able to slip it past the outstretched pad of the goaltender to make it 2-0. Alexander Khovanov and Svechnikov assisted on the goal.

Thirteen seconds into the second period, Svechnikov shot the puck on the backhand top-shelf on a breakaway to give Russia a 3-0 lead.

K’Andre Miller (Minnetonka, Minn.) scored shorthanded from the point for Team USA at the 19:00 mark of the second period to make it 3-1. Miller fired a quick wrist shot into the net after a face-off win from Trevor Janicke (Maple Grove, Minn.).

Fifty-four seconds into the third period, Hughes scored off a pass from Miller to put Team USA within one of Russia. Wahlstrom also assisted on the goal.

Danila Galenuk scored off a deflection in front at 10:24 in the third to give Russia a 4-2 lead. Daniil Zhuravlev and Svechnikov tallied assists on the goal.

Joel Farabee (Cicero, N.Y.) scored at 11:04 of the third to make it 4-3. Hughes stickhandled around the defender in front and passed to Farabee who shot the puck past the Amir Miftakhof’s stick. Wahlstrom also assisted on the goal.

Wahlstrom a goal at 13:13 of the third to tie the game, 4-4. Hughes picked up his third point of the night with the assist on the goal.

Drew DeRidder (Fenton, Mich.) made 15 saves, including a Russian penalty shot during the third period.

U.S. head coach Seth Appert was pleased with the U.S. team’s  turnaround after its loss on Wednesday to the Czech Republic.

“It was the complete opposite of the Czech game which was great because we talked a lot about that,” said Appert. “Our guys could’ve been really frustrated again when we were down, outshooting them badly, and the power play wasn’t clicking but in the third period we shared the puck as well as we’ve shared the puck all tournament and all of the goals came on give and go type plays, not from one guy trying to beat four guys.”

Russia returns to action tomorrow at 3:30 in its final game of the tournament against Sweden. Team USA will host Finland at 7 p.m. tomorrow night for their final game.

Sweden opened scoring at 7:57 of the first period when Jonatan Berggren backhanded the puck past the Czech goaltender, Lukas Dostal.

Michal Kvasnica sent the puck in from the left circle to tie the game, 1-1 for the Czech Republic at 8:21 of the first period.

Nils Lundkvist put home a rebound and gave Sweden a 2-1 lead at 6:15 of the second period.

Linus Nässén extended the Sweden lead to 3-1 at the 11:28 mark of the third period off a cross-ice pass from Marcus Westfält.

Samuel Fagemo scored the final Sweden goal in the final two minutes of play to bring the final to 4-1.

Sweden goaltender Jesper Eliasson  made 15 saves to pick up his first win of the tournament while Czech goaltender Lukas Dostal tallied 39 saves.