Hockey Was Not Love at First Sight for Alex Vlasic 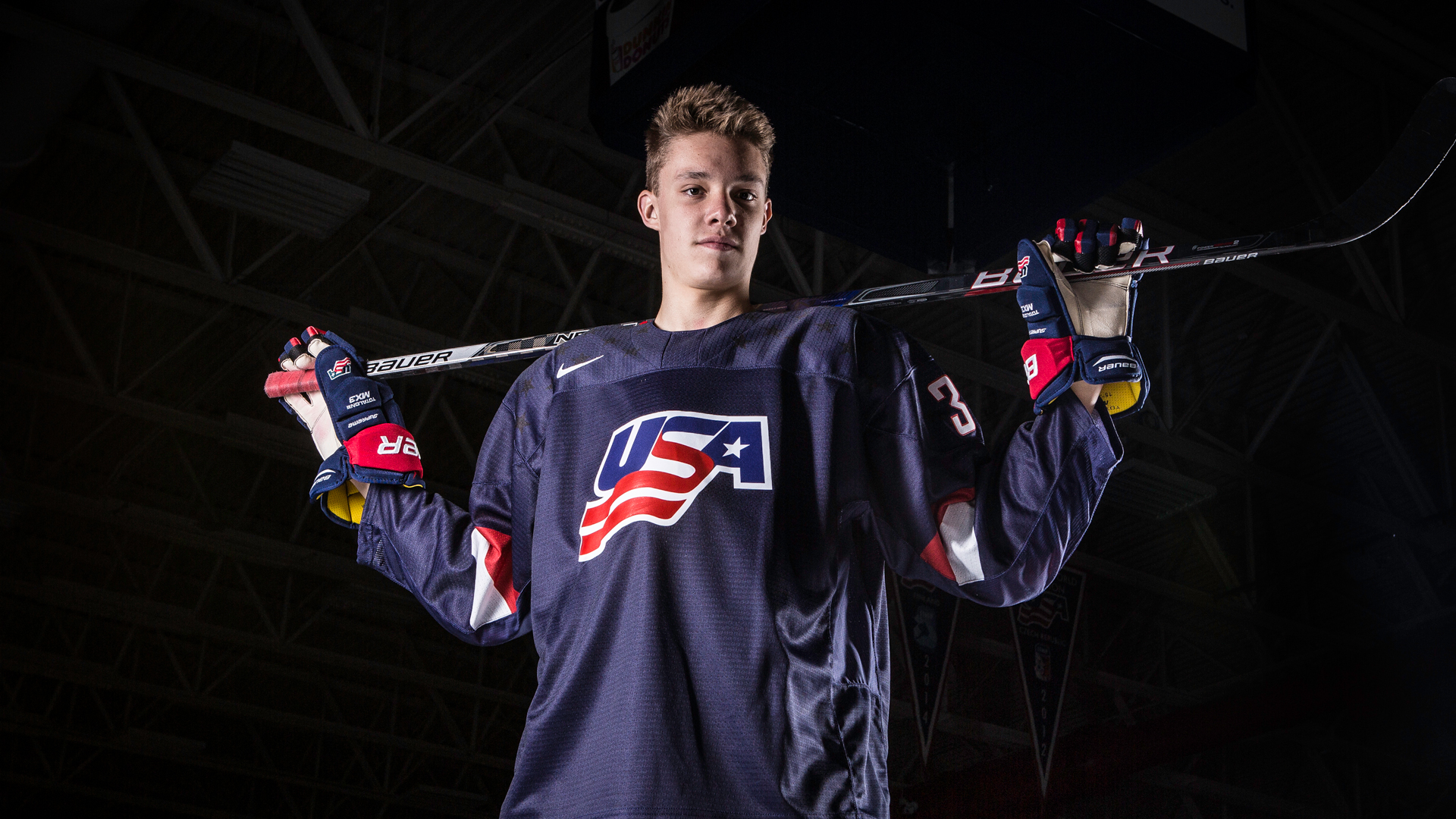 To watch him man the blue line for USA Hockey’s National Team Development Program, it’s hard to believe there was ever a time that Alex Vlasic wasn’t in love with being on the ice.

But that’s exactly what Vlasic was like at the age of three, according to his parents, John and Tara.

“I started skating when I was three as my mom and dad got me into it,” explained Vlasic. “I have been told by them that at first, I didn’t like it. I refused to go on the ice but eventually, I got on and wanted to skate and then play hockey.”

Vlasic and his older siblings — Eric and Emma — probably drove their parents a tad crazy when they were growing up in Wilmette, Illinois with some basement hockey. There are still marks on the ceiling to prove it.

“We used to play hockey in the basement,” he said. “We had just moved into our new house, where we live now, and I accidentally hit my stick into the ceiling. It left a mark and a dent, and it’s still there today.”

Vlasic still leans on the advice of his sister, currently playing college hockey at Yale University, while his cousin, Marc-Edouard Vlasic, plays for the San Jose Sharks.

“[Emma] is very serious about hockey,” said Vlasic. “I train with her and workout with her in the summer. She definitely takes it seriously. She has been a great role model and has set a good example for me.”

For Vlasic, a 6-foot-5, 189-pound blueliner, deciding to play defense was influenced by his cousin and his dad, both defensemen.

“I did play forward as a kid until I was nine but then, I switched to D,” Vlasic said. “I think it’s the best of both worlds. You have lots of responsibility. You are the last guy before the goalie. You have the puck on your stick and in those important moments, your team is relying on you.”

The transition from playing for the Chicago Mission to the NTDP was a learning curve this season. With a sizable frame, Vlasic realized that he needed to use his size to his advantage for success and his role with the team.

Favorite Book
Catcher in the Rye by J.D. Salinger

“I do have a longer reach so it’s easy to keep track of the puck and use my stick to poke the puck away,” Vlasic said. “The speed has been the biggest difference. When you are playing D, you have to be able to know that you are the last guy back and you can’t try to do too much. It doesn’t take much to turn the puck over and it will be in the back of your net.”

Vlasic credits the intense and fast-paced practices with really helping to improve his game. That’s due to the Under-17 coaching staff that Vlasic believes has played a huge part in his development, especially Head Coach John Wroblewski and Assistant Coach Greg Moore. Both coaches are former NTDP players so they understand what the team is going through at this point, both on and off the ice.

“It helps so much,” said Vlasic. “They understand our struggles as they have been in the same situation. It’s good for us. It can be a hard game to play but they tell us to keep going and to never give up. It’s going to be a hard two years but it will be worth it.”

Vlasic and his U17 teammates are gearing up for a pair of home games this weekend (Feb. 2-3) against the Lincoln Stars before heading to Finland for the squad’s final international tournament. The U17s have won their first two international tournaments — the Under-17 World Challenge in British Columbia and the Four Nations in Russia. It’s going to take a team effort to win once again.

I started skating when I was three as my mom and dad got me into it. I have been told by them that at first, I didn’t like it. I refused to go on the ice but eventually, I got on and wanted to skate and then play hockey.

“We all have to be on the same page and dialed in as soon as we land,” explained Vlasic. “That really helped us in both Canada and Russia as we took first place in both tournaments. There is nothing better than winning. Everyone plays their hearts out for the tournaments.”

Vlasic is very proud of the team’s success on the ice this season. Although he can’t say exactly what it is, he knows just how special this group is to play with.

“I can’t pinpoint one thing for our success,” he said. “We are definitely close-knit and we have character and support each other. This team is super outgoing. We are always willing to cheer a guy up, if he has a bad game or makes a mistake.

“The team’s compete level is off the chart. We all want to win and will do whatever it takes.”

Of course, there’s nothing quite like wearing the red, white and blue to motivate a team. 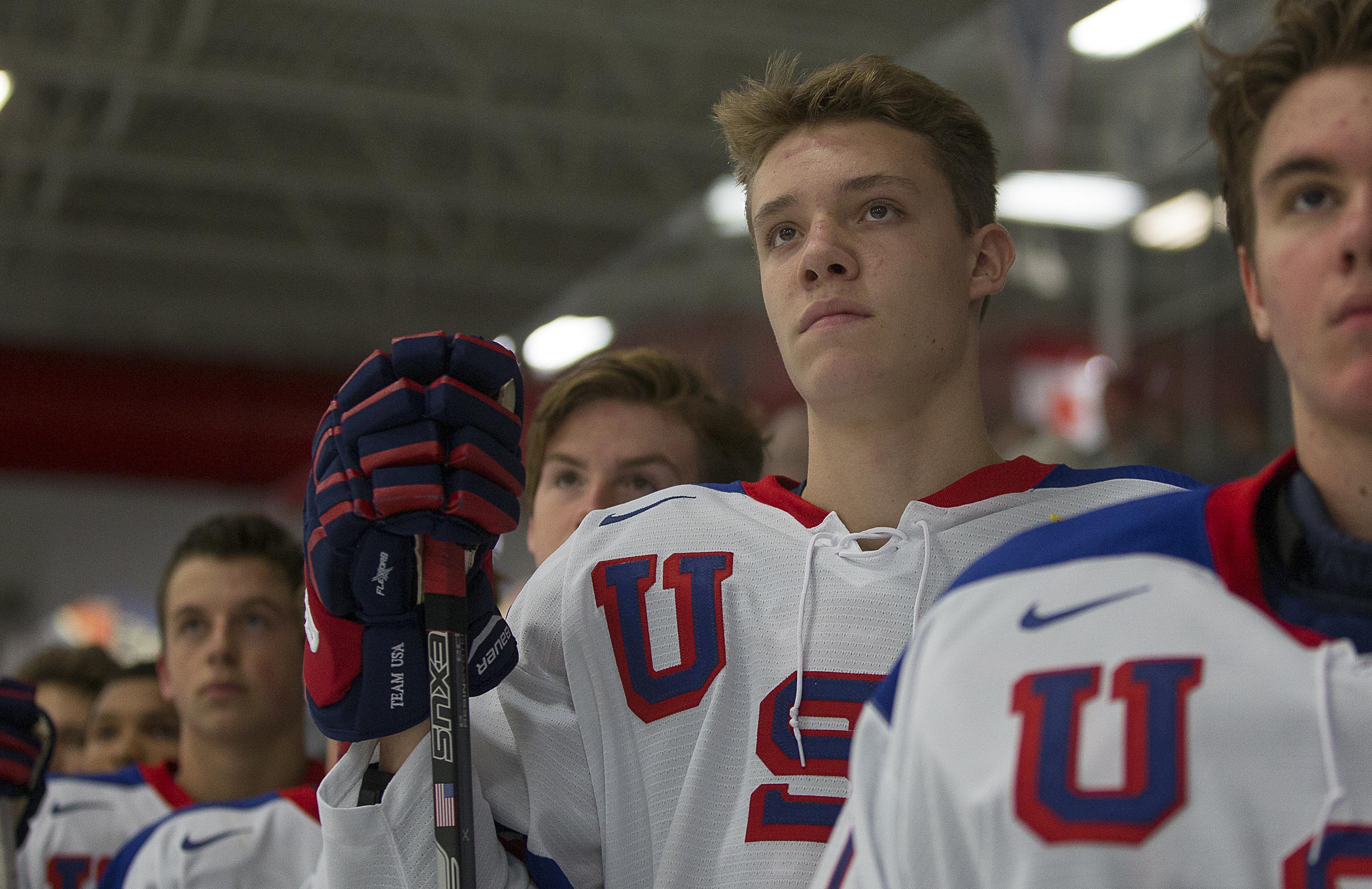 “It means so much and there is not a better feeling [than to wear the jersey]. People do not realize how special it is to represent your country,” he said. “You are not just playing for your team but for your whole nation. It is the biggest honor you can have.”

Maybe if three-year-old Alex Vlasic could have seen himself play on the world stage one day, he’d have gotten on the ice even sooner.