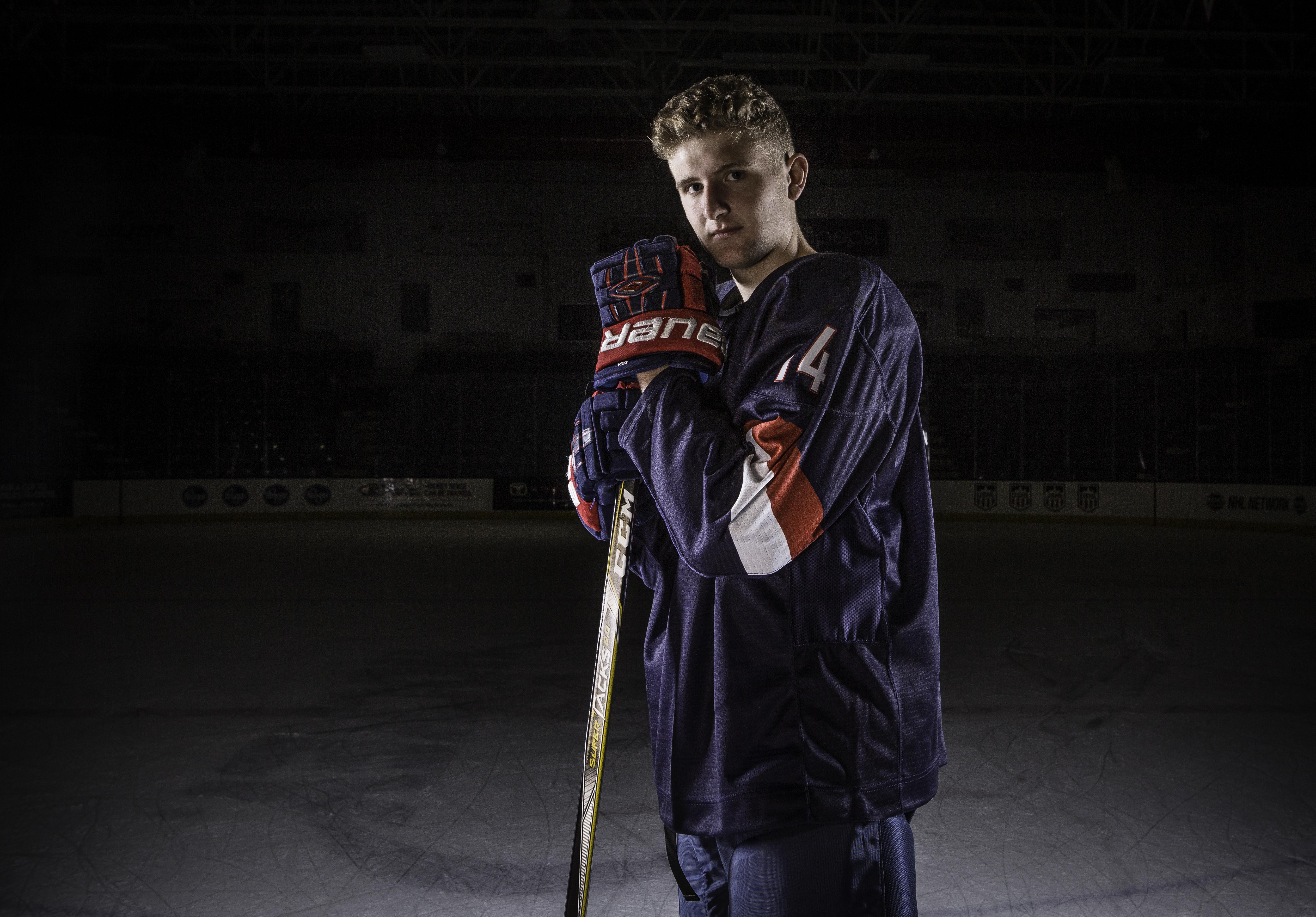 Growing up as a coach’s son can be a blessing and a curse.

For Jack DeBoer, whose dad Peter is the current head coach of the San Jose Sharks, it has given him a mentor that he can turn to, especially when the going gets tough.

“He gives me lots of advice,” said DeBoer on his dad’s influence. “After games, we always try to talk. He has been huge for my hockey career. He got me into the game at a young age. He has been my biggest mentor and my biggest fan ever since that first time on the ice. He’s the guy I look up to.

“He told me, after I struggled last year, ‘If you keep working, things will get better and you just can’t quit. You can’t quit in the weight room, or on the ice, or on your teammates. You have to pick your head up and good things will happen.’”

His dad’s words of wisdom came in handy, especially after a rough Under-17 season with USA Hockey’s National Team Development Program. This year, as a member of the Under-18 team, he is reaping the benefits of the team’s hard work and he is experiencing success on the ice.

“The pace is the biggest difference,” said DeBoer. “Last year coming into the USHL and you are 15 years old, and you are playing against guys who are 3 to 4 years older and you haven’t really done that before. You struggle that first year.

“Something happened over the summer, and I’m not really sure what it is, and you come back in your U18 year and everything seems to slow down more. You can see the ice better. Plays seem to slow down and it’s easier to make plays. We all got stronger over the summer. It’s paying off this year.”

DeBoer, a 6-foot-2, 188-pound forward, credits the training from the month of May as another reason for the team’s success. The team not only worked with strength & conditioning coach Darryl Nelson, but they bonded off the ice just hanging out and getting to know each other.

“It bonded us — a ridiculous amount,” he said. “I think it felt like we were together 24-7 … When you are together like that, we build that chemistry with everyone.”

The Madison, New Jersey native plans to take his game to Boston University next year. It felt like home to him from the very beginning.

“I love the city and the campus,” explained DeBoer. “I call it the smaller New York City. It’s homier. I was looking at some smaller schools but I really wanted to go to a school in the city. It was just a great fit for me. I think every kid when they look at colleges, BU is right up there for any kid that lives on the East Coast. When they offered me, I was ecstatic. It didn’t take me long to make my decision. I’m really looking forward to going there.”

DeBoer and his U18 teammates were supposed to face BU on Jan. 5 but due to the snowstorm in Boston, the game was cancelled. Although he was disappointed, he’ll be playing at Agganis Arena soon enough along with three of his current U18 teammates — Joel Farabee, Tyler Weiss and Jake Wise.

“It makes it special and will make the transition a lot easier for all four of us,” he said. “I’m pretty close with all three of them and it will make it easier. We usually go there in the summer for a month — skate and workout, and hopefully, we can catch a few Red Sox games too. I’m looking forward to it. It will be pretty special to be with those guys again.”

Although DeBoer missed out on the chance to play his future college team, the NTDP’s slate of games with other college teams will be important preparation for next year as he adjusts to the speed and pace at the collegiate level. 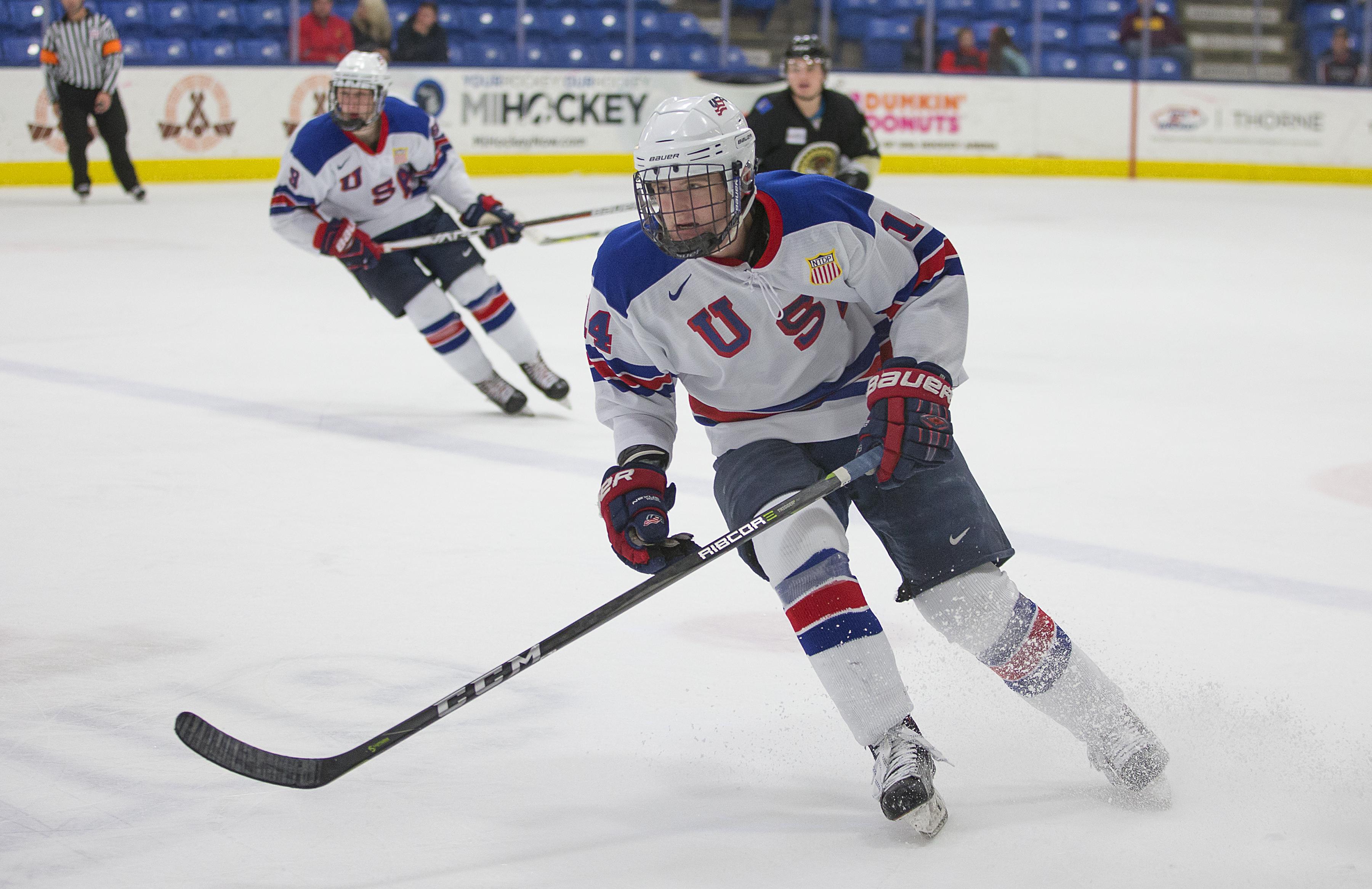 “I think it will give us a huge advantage on most guys coming in,” he said. “That is what is so special about the [NTDP], you get the opportunity to play college teams in your second year. They give you those chances to see what the college game is like and for all of us coming in next year, it will be huge.”

The NTDP’s schedule has included road games against college opponents, giving players a chance to experience the atmosphere against opposing fans, but they’ve also welcomed teams to USA Hockey Arena. Those, he said, have been an “awesome” experience to play high-profile games against top competition.

“We were talking about it a few weeks ago,” he said. “The Michigan and Michigan State games, we had full houses. Those are the games that you really get up for … The crowd was awesome for both of those games and we really fed off it.”

Another awesome crowd is expected at the 2018 Under-18 Five Nations Tournament at USA Hockey Arena from Feb. 13-17. Team USA will face competition from the Czech Republic, Finland, Russia and Sweden in the round robin event.

“It’s going to be fun and unique,” DeBoer said on the tournament. “You will be playing Russia but you are driving from your house to play Russia. It will be a good experience. It will be better for us as we will be in our home environment and you do your regular routine to get ready for the game.”

Just as he has from his dad, DeBoer continues to apply lessons he’s learned along the way from the U18 coaching staff.

“We need to play our game,” he said. “We are starting to do that now. Coach [Seth] Appert stresses that we need to be creative with the puck but also responsible with the puck.”

In addition to continuing his hockey education, DeBoer gets the chance to represent his country, something he never takes for granted.

“There are no words,” he said. “The first time I put [the U.S. jersey] on at the Youth Olympics in 2016, you get chills and I still get chills putting it on. It never gets old.

“As my dad told me, you have to take advantage of it as much as you can because after these two years, you never know when you will be able to represent your country again. I think that I what is so unique about the USA program, you have the opportunity to wear the jersey for two years every day and it’s not something I take for granted.”