Love of Hockey Instilled in Alex Turcotte Early On

The NTDP forward was influenced by his hockey-playing family 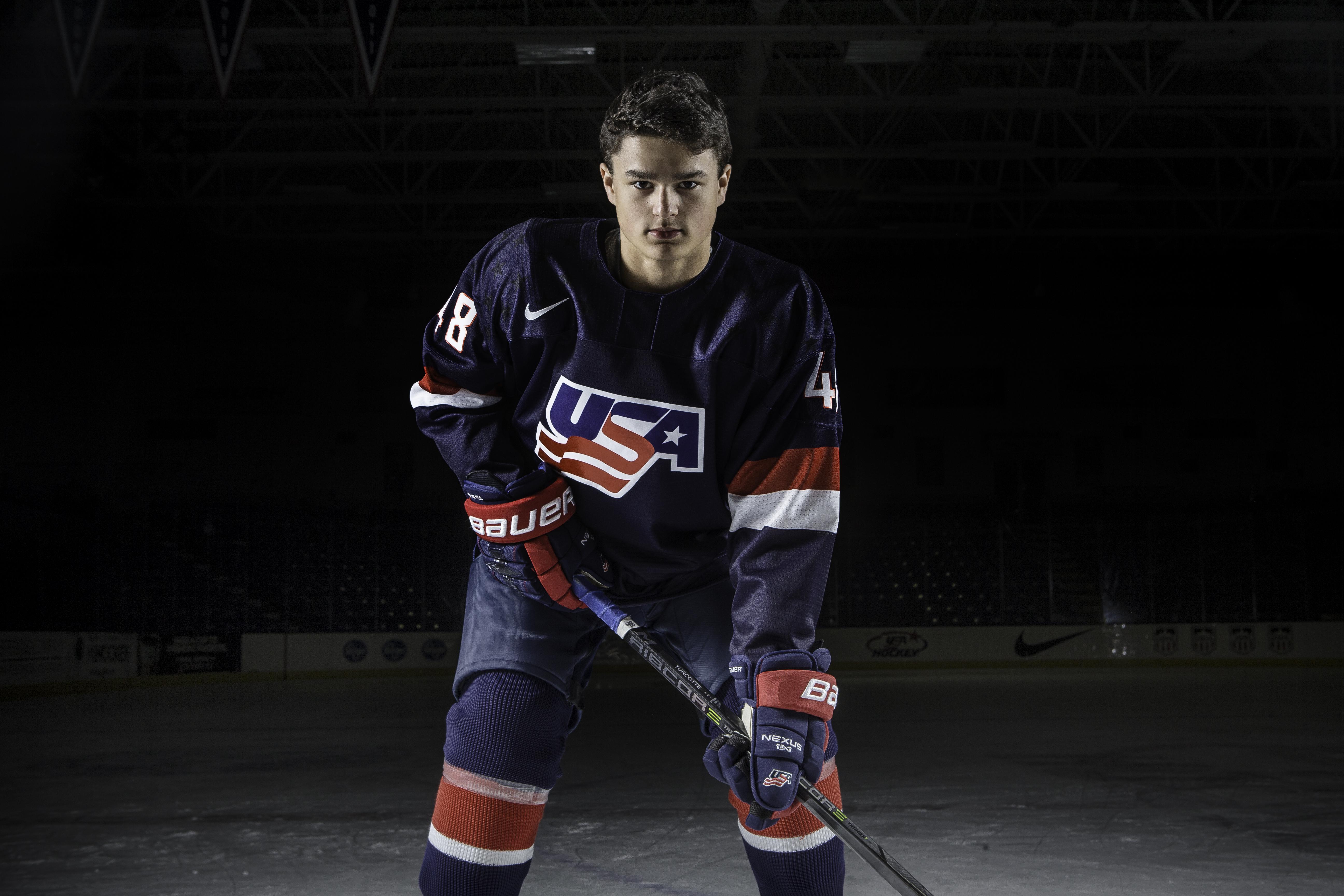 To the surprise of absolutely nobody who knows him, hockey was the first sport that Alex Turcotte ever wanted to play.

“I started playing when I was three years old,” Turcotte said. “My dad [Alfie Turcotte] got me into it; he was around hockey his whole life too. I liked the fresh air and skating around the ice.”

Alfie Turcotte played pro hockey for the Montreal Canadiens, but he wasn’t the only one in the family with an extensive hockey background. Alex’s grandfather Real played hockey at Michigan State University and is a famed hockey instructor. Plus, Alex’s uncle Jeff Turcotte played for the Toronto Marlboros of the Ontario Hockey League.

“They have had a major influence in my life,” said Turcotte on his family. “They are the reason I play hockey. They are really good about it. They help me as much as they can to try to make me the best player I can be.

“My dad was my coach when I played Bantams in Chicago. When I first started, he was my coach too. He was great and helped me.”

After playing for the Chicago Mission last year, Turcotte jumped at the opportunity to join USA Hockey’s National Team Development Program. After all, he knew all about what the NTDP could do for a player’s development.

“There are many NHL stars that came out of [the NTDP] such as Auston Matthews, Patrick Kane, and Dylan Larkin just to name a few," said the Island Lake, Illinois native. “The NTDP knows how to develop its players. The training program they have here is second to none.

“I was at home with my parents when I got the call that I made the team. It was a few days after tryout camp. They called me and it was exciting and awesome when I found out.”

He also was able to turn to current Under-18 player Bode Wilde to gain some additional advice and knowledge about the program.

“I knew Bode as he used to play for the [Chicago] Mission which is where I played last season,” he said. “I asked him a few questions and picked his brain a bit. He told me to be ready and work as hard as you can. He also told me it will be grueling but if you work through it, it will pay dividends.”

Favorite Home-Cooked Meal
Steak with corn on the cob

Those dividends paid off for Turcotte and his Under-17 teammates as the squad took first place at the 2017 Under-17 World Challenge in Dawson Creek, British Columbia in early November. The U17s posted a 6-4 win over Canada Red in the title game on Nov. 11.

“It was awesome,” he said. “Playing in front of tons of Canadians and ruining their party, there is nothing better than that. I think we deserved it — we worked really hard for it. Everyone played really well.”

Of course, the celebration at the end and the national anthem will be something that he will always remember.

“There was about three seconds left in the game and I jumped out a little too early to celebrate and went nuts,” said Turcotte, who tallied three goals and six points in tournament action. “It was a blast to hear the national anthem. There is nothing better than to hear that song being played, especially on Canadian soil. It made it a little more special.” 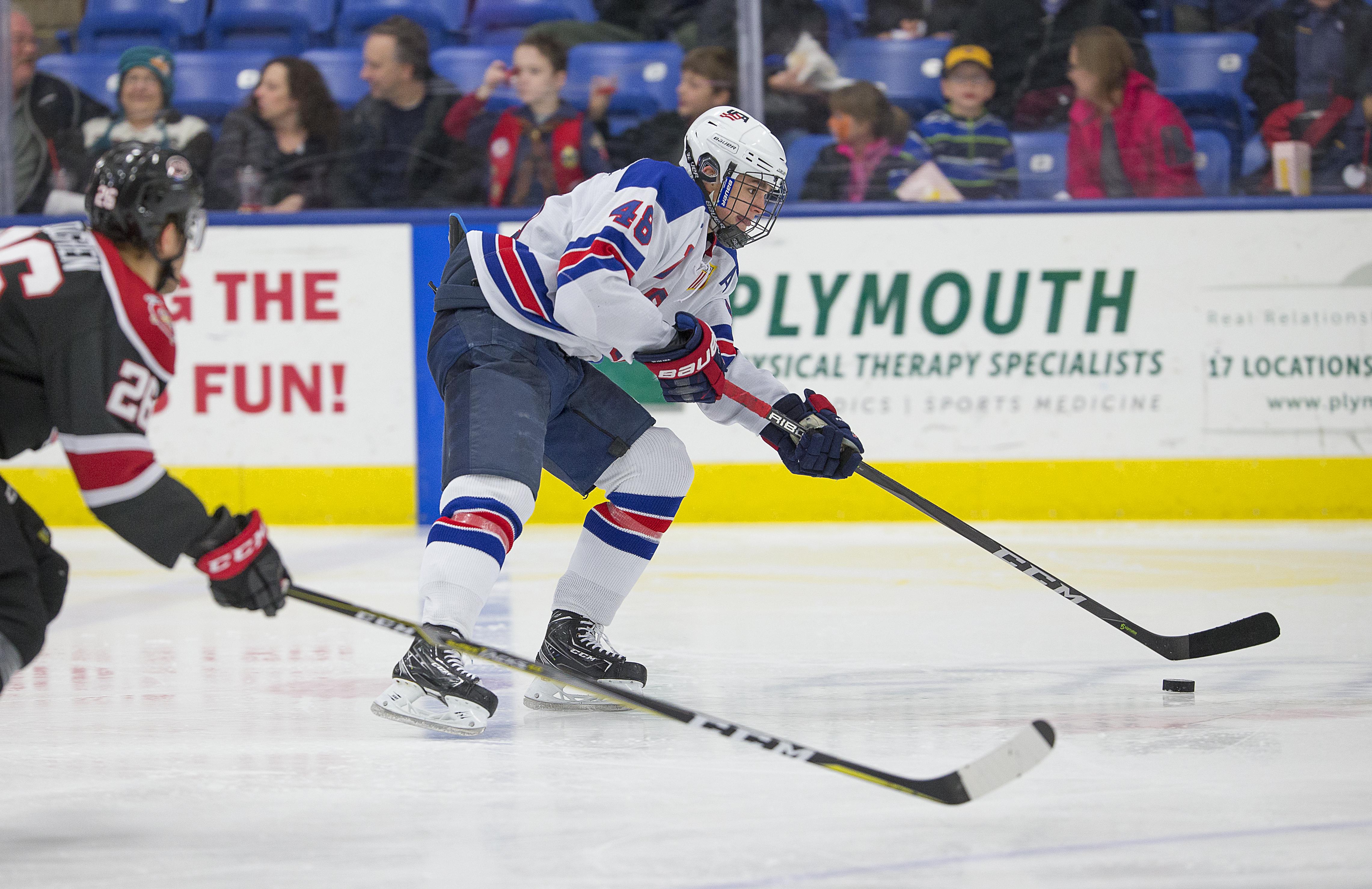 “It’s really hard [to finish the tournament undefeated]. Everyone comes out with their best game and they are trying their hardest to take us down so we had to be ready every game,” explained Turcotte.

There will always be one game that he will remember and that was the first exhibition game, a 9-1 win over Canada Red on Nov. 2.

“I think our first exhibition game, which also was against Canada Red. It was cool to see the atmosphere and it was against the same team too. It was our first international tournament game so I will always remember that one,” he said. “Playing for our country is a blast. There are not many things that can beat that since we are representing everybody.”

Turcotte and his U17 teammates are getting ready for their second international tournament in Novgorod Oblast, Russia, which runs from Dec. 14-16. Team USA will face Slovakia, Switzerland and Russia in the four-team event and he knows what they need to be to be prepared.

“We need to keep working hard in practice and in the gym to try and get better every day,” he said. “I think if we do that, then I think we can do well in Russia.”

“They push us hard in practice every day and they give us great advice on what to expect,” he said. “I also think the guys on the team push each other every day. We want to be the best we can be.

“As former players, Coach Wrobo and Coach Moore know how grueling the practices are. They give us their advice on how to handle things.”

Plus, Turcotte also can turn to his dad for some advice if he needs it too. There are a few words that stick out to him and that he tries to practice each and every day.

“He told me to work your hardest and try to be the best you can be every time you step out onto the ice,” he said.