Before becoming a Wolverine, Wilde will face his future college with NTDP 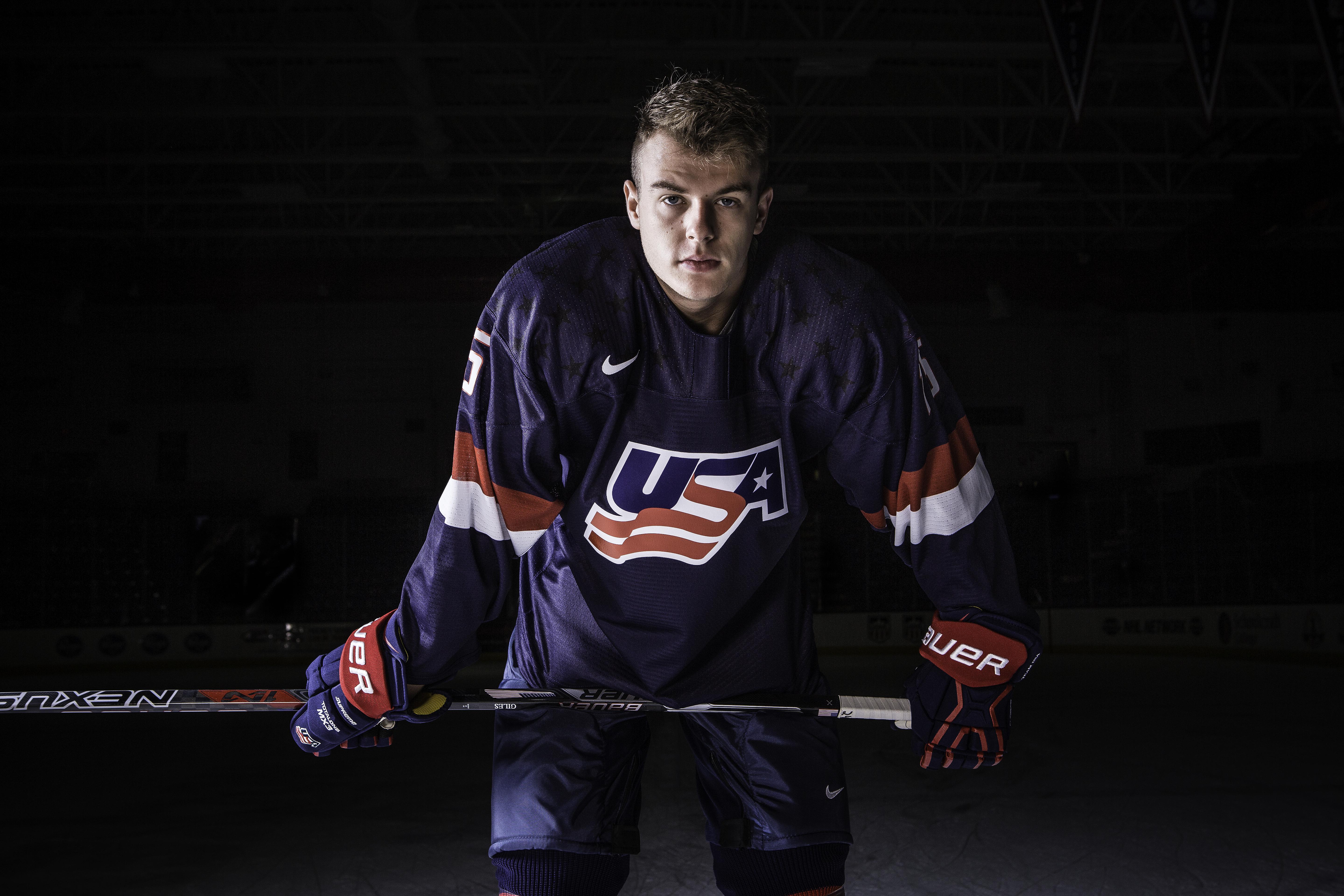 Bode Wilde was 14 the first time he attended a University of Michigan hockey game at Yost Ice Arena. It might have been the atmosphere, or the student section, or the pep band, or the historic old barn itself, but all it took was one game and he knew right away that he wanted to play for the Wolverines.

“It was the first college hockey game that I went to when I was 14 so I wasn’t super young,” explained Wilde, who grew up in Birmingham. “It was a school I liked for a long time. Being from Michigan, and always hearing about them and seeing their games, so when I made the decision it was a no-brainer for me. It was where my heart was at for a while.”

Wilde and his USA Hockey National Team Development Program Under-18 teammates are gearing up to face the Wolverines this Saturday (Dec. 2) at 7 p.m. at USA Hockey Arena. It will be a special experience for him.

“It’s pretty cool to play against my future teammates and future coaches with my brothers this year,” he said. “I think it will be a special experience and we should have a good crowd which will make it fun.

“I know the three former NTDP players on Michigan who played here last year [Quinn Hughes, Josh Norris and Michael Pastujov]. I know of some of the other NTDP guys on their roster who played here previously.”

He knows just how important it is in his development in playing college teams this season and what it will do next year as a rookie at Michigan.

“It gets those jitters out,” said Wilde. “You are playing college games now, against guys who are older and stronger. It will let me jump right into it next year.

“We have to continue to play fast,” he said. “I think that is the biggest difference from the USHL and international games. Guys are bigger and faster. We have to be physical, move the puck and play our game.”

Wilde has already seen a big difference on the ice between his Under-17 season and this year as a member of the Under-18 squad. He credits a simple formula in this success.

Favorite Netflix Binge
How I Met Your Mother

“Our chemistry is a lot better,” he explained. “It’s our second year together and we know each other better. We understand the way the game works in the USHL and we have been pretty successful so far. Our success there is helping us carry it over into the NCAA games.

“It was in the springtime last year after our season had ended when the chemistry really started to click. We were spending time together since there were no games. We were battling hard in practice since we had no one else to take it out on. I think being together once the season is over and grinding it out together really helped out.”

In addition, Wilde is taking to heart some words of advice from current head coach Seth Appert.

“It’s the team motto that he brings up a lot which is, ‘Respect All. Fear None.’ I think that is a big part of our year so far. We respect teams by working hard and playing hard. Fear none is pretty self-explanatory,” explained Wilde. 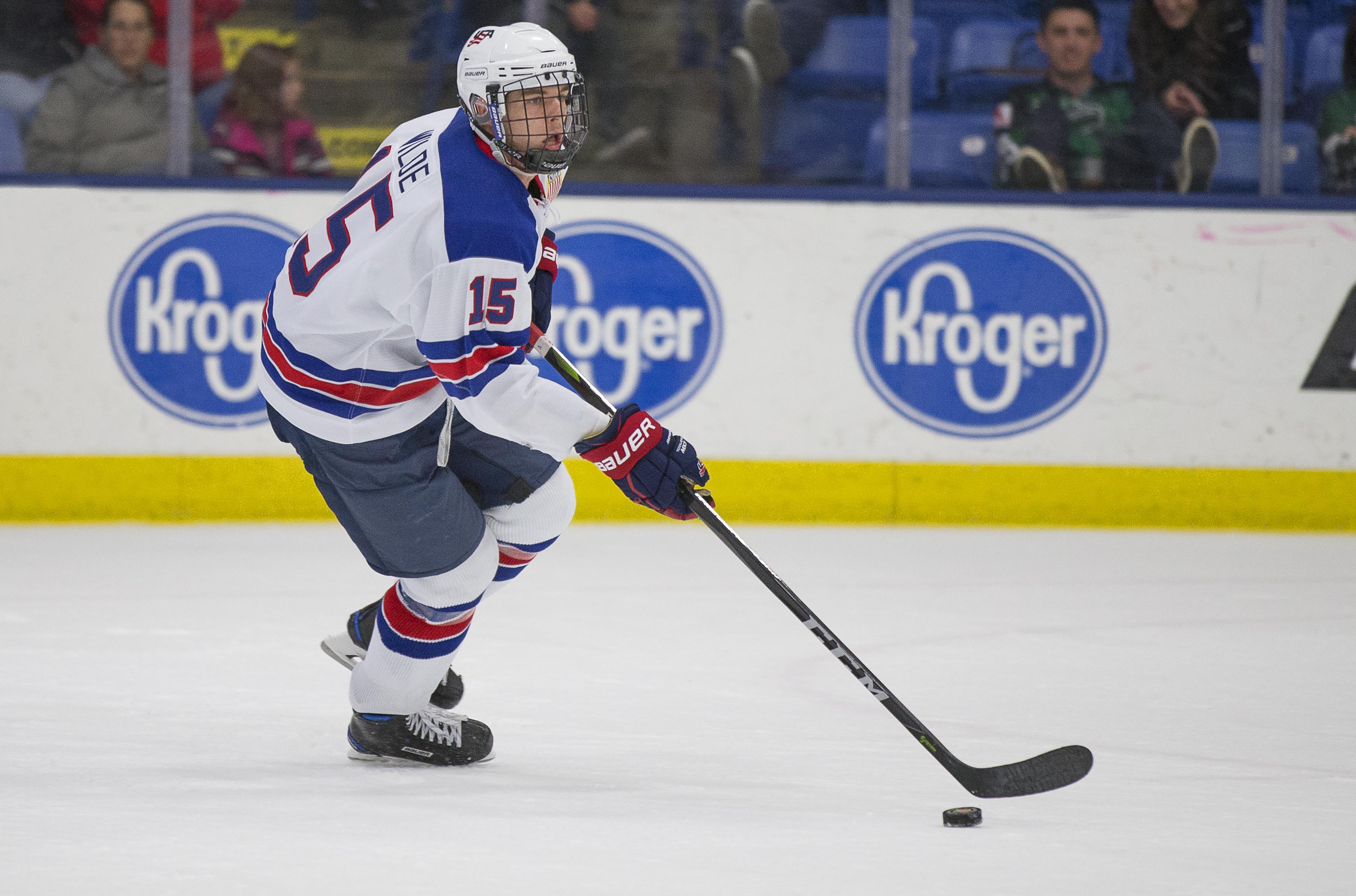 Wilde credits this advice as a big reason for the early season success the U18s have had against USHL opponents.

“I think our end of the year meeting last year is that we are all done getting beat up in the USHL,” he stated. “I think a lot of it at the beginning was passion that fueled that momentum and got us those wins. Now, we have the confidence and understanding on how to continue to win and battle through those tough games. We definitely have had some close ones.”

The 6-foot-2, 195-pound blueliner can reflect back and realize how much his game has grown since his first season in the red, white and blue. It’s the little things that are making a big difference in his game.

“The D specific stuff that we do with Coach [Nick] Fohr, whether it’s walking the blue line and then, shooting or going back for pucks and where to place them so your partner can get to them easier.”

“We can’t give it to teams easy,” he said. “Sometimes we took our foot off the gas and played passive. We got away from our game and tried to be a little more individual since it was our own birth year. Once we got back to the team game, even some of the games we lost, we took control of the game. We will be ready for February. We take pride in putting on that sweater.”

That pride will be shining through for Wilde each time he hits the ice this season.