Boston University's Jordan Greenway, a member of the NTDP from 2013-15, aims to help the Terriers make it to the NCAA Tournament. 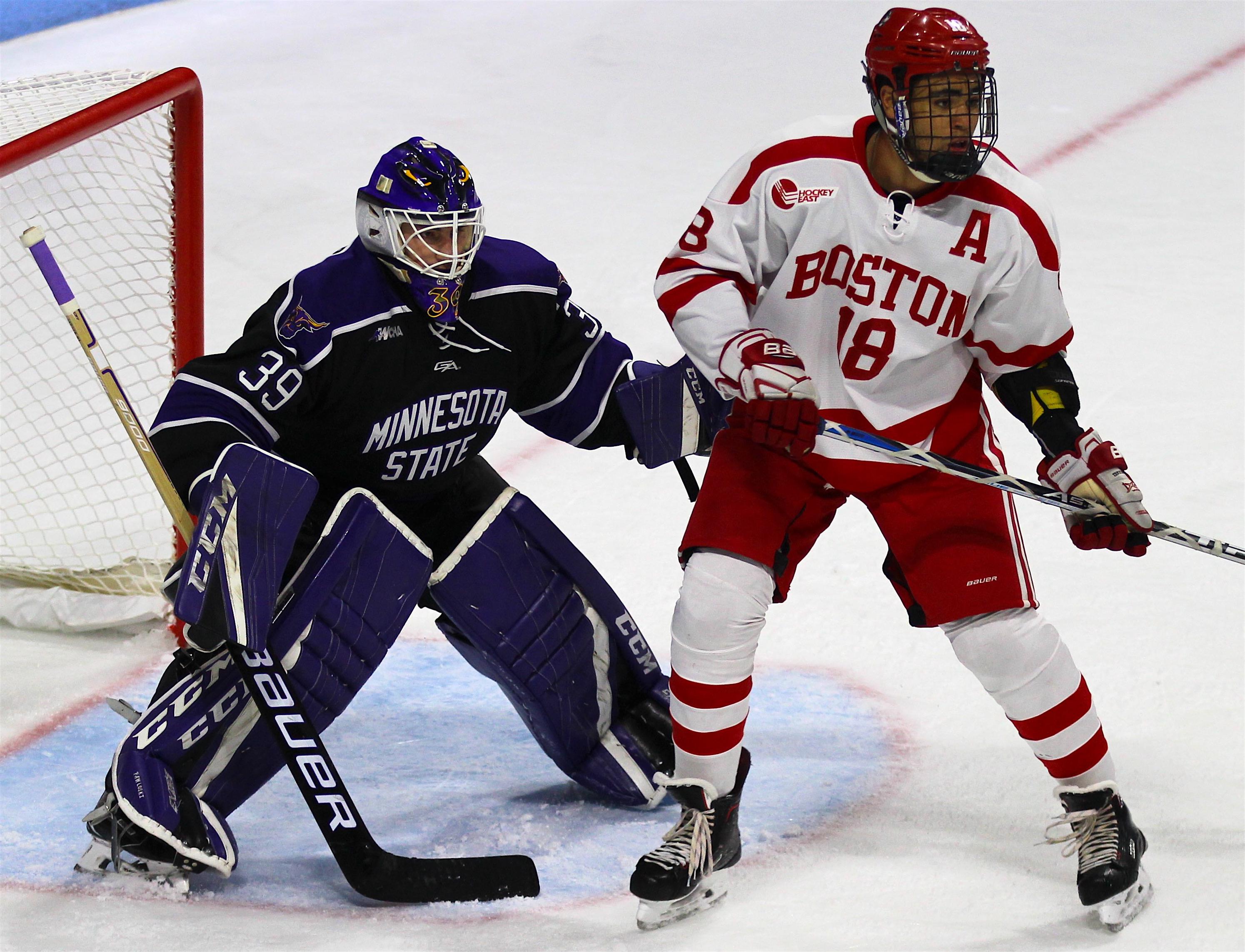 At six-foot-five, 238 pounds, Jordan Greenway isn’t a guy you want to push around on the ice.

The junior forward for No. 15 Boston University has had substantial success in his past three years with the Terriers, making an appearance in 88 games and recording 65 points. Of those points, 18 were goals and 47 were assists.

Before he was a point-scorer for Boston, though, he made an impact for USA Hockey’s National Team Development Program.

“I was always the biggest kid growing up, and it was so much easier to keep the puck away from everybody else and not get knocked over,” Greenway said. “The first time I got hit in college hockey was so weird. I don’t think it took too long, there was definitely an adjustment period, but I kind of figured it out pretty quickly. Playing the colleges my U18 year definitely helped out.”

Greenway was with the NTDP for two seasons, 2013-14 and 2014-15, and was selected in the second round of the 2015 National Hockey League Entry Draft for the Minnesota Wild. While with the NTDP, Greenway scored 25 goals and recorded 60 assists for an 85-point career with the red, white and blue.

He was also a part of two gold-medal winning U.S. teams; the first was the 2015 U.S. Men’s National Under-18 Team that won gold at the International Ice Hockey Federation Under-18 Men’s World Championship. Greenway played all seven games and scored seven points for the U18s. While on the 2017 U.S. National Junior Team, he won the IIHF World Junior Championship, scoring three goals and five assists in the tournament to help the U.S. squad to a 5-4 win over Canada.

During his time with the U18s, Greenway traveled to Boston to play the Terriers as a part of the NTDP’s college schedule. He was able to step onto Boston’s campus as a commit for after he finished his 105-game career with the NTDP.

“It was fun, being able to come in and see the atmosphere of the rink, see how much fun it was to play in front of a bunch of students you go to class with and see the facilities here,” Greenway said. “That was one of my first few times coming here and seeing the facilities and seeing how good of a team they were. They were great that year, they went to the national championship, and playing against them and seeing all the great things they did, knowing I was going to come here the next year and be a part of it was a pretty special experience.”

It didn’t take long for Greenway to make an impact at Boston. He made an appearance in all 38 games his first year, leading freshman forwards in assists with 38 and was a two-time Hockey East Rookie of the Week.

Sophomore year didn’t disappoint either, as he was named a Hockey East Top Performer of the Week after a three-point game at Michigan. He even took a break from playing with the Terriers his sophomore year to play at the World Junior Championship. 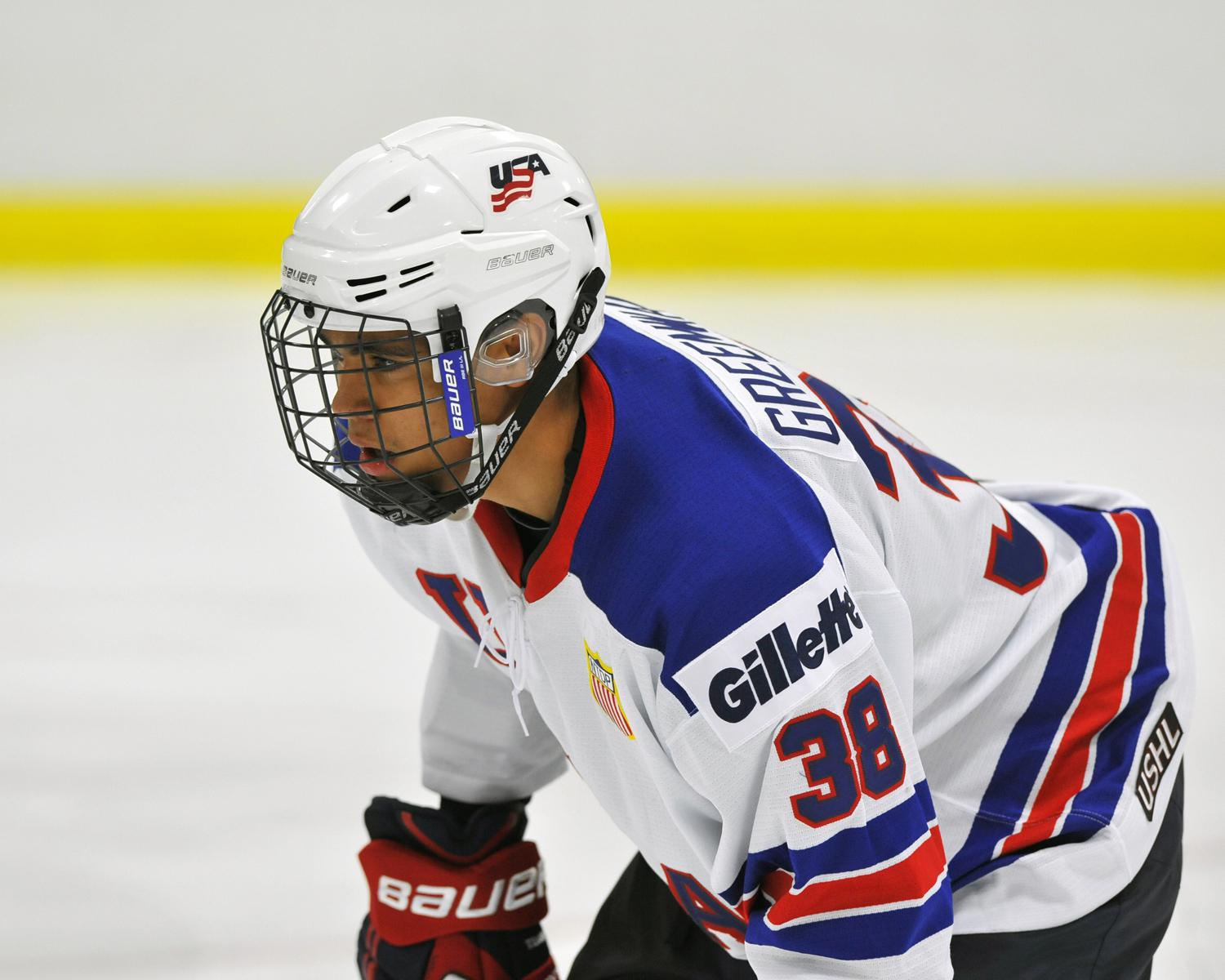 “That was pretty crazy,” Greenway said. “That was probably the craziest team I’ve ever been a part of to be honest with you. We had a great team, pretty similar to my NTDP team. Just playing in Canada, obviously with the USA, Canada rivalry, it made it that much more special. And playing them in the gold medal game in front of all of their fans, it was something else.”

“It was a great, great experience and it’s probably one of the best groups of guys I’ve ever played with. I still talk with most of them all the time,” Greenway said. “Everyone wants to do that when they’re younger, play in the World Juniors, and it was something I was able to be a part of which is an honor and then to go over there and win the gold in Canada made it like, ten times better.”

With three goals and five assists to date, Greenway is looking to help push the Terriers even farther this year. After falling to eventual-runner-up, the University of Minnesota-Duluth in last year’s NCAA tournament, Boston is on the look-out for another chance in the NCAA tournament, and Greenway can help make that happen.