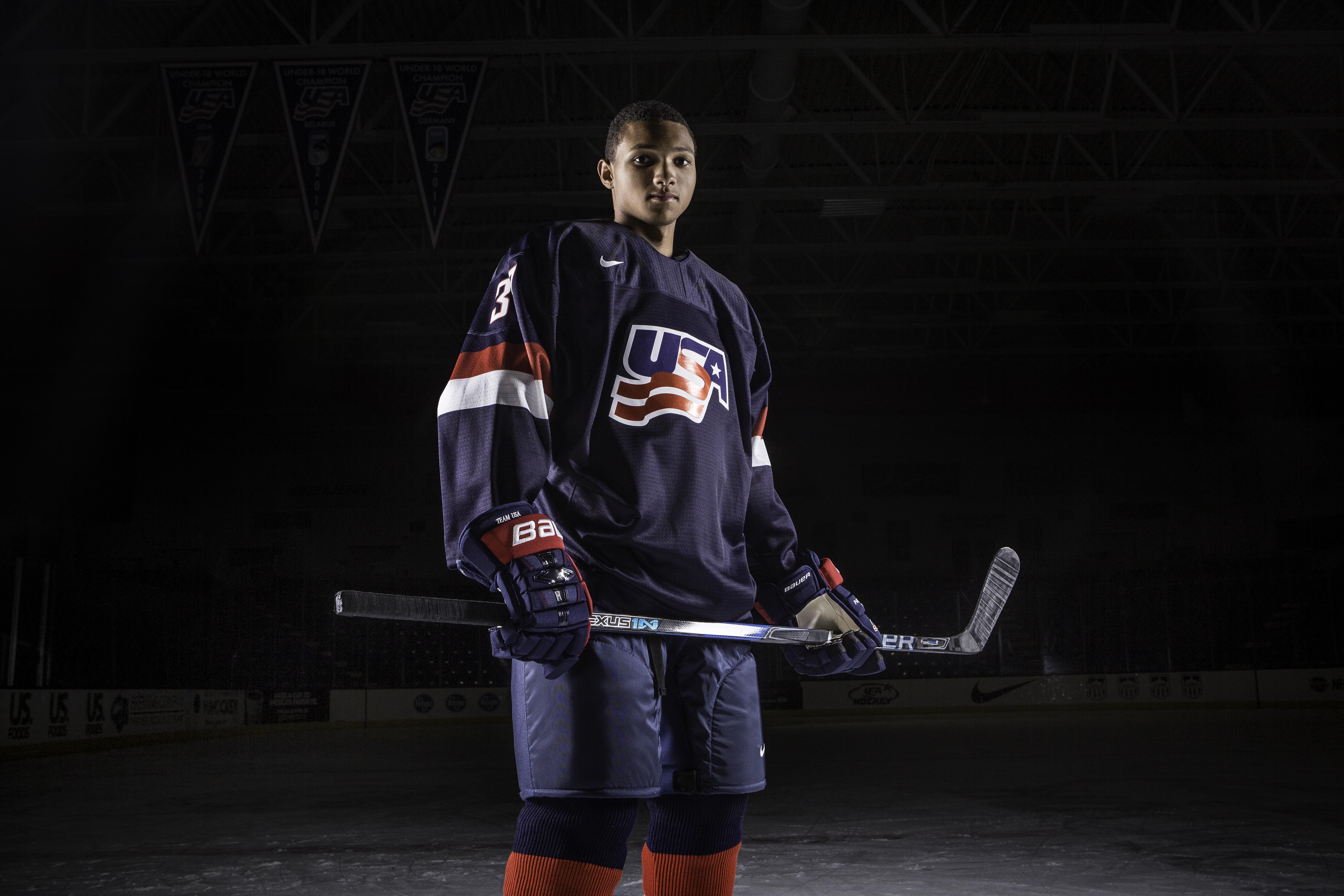 Marshall Warren wasn’t always happy with his mother when it came to his budding hockey career as a toddler. The age of five, when he started playing, is plenty early, but Warren was itching to get out there even sooner.

“Then, eventually, she let me start playing hockey. I would see all my friends play hockey but my mom would never let me until I was a good enough skater. I was the last one to have a stick when I was five years old. I was always mad at her but it has paid off so far. She was right at the end. She does remind me of it sometimes.”

Once Warren got more involved in hockey, it was one of his former coaches that encouraged him to play defense. Once he started at the blue line, there was no turning back.

“I started playing forward until I was squirt major,” Warren said. “My coach on the Junior Bruins at that time, he was like, ‘Maybe we should switch you to defense because you can see the ice well and you are a good skater. You have good vision.’ So, I ended up switching to D and I really enjoyed it. It was a good transition.”

Warren, who is 5-foot-11, 161 pounds, enjoys playing defense and understands the important role that he has to play.

“I like seeing the ice. The game comes back with you and everything comes forward from you. I like to skate with the puck and making good passes. I like the grit, especially when I can get into the action. It’s fun,” he said.

Warren, who grew up in Laurel Hollow, New York, was very excited and honored to be named to USA Hockey’s National Team Development Program this season. He appreciates the opportunity to have a hockey home.

“Honestly, for me, last year I played for a team in New Jersey [North Jersey Avalanche 16U] and I had to drive two hours to get there,” he said. “I think the aspect of sleeping and having a system here is so much better. The practices are definitely much tougher. It’s honestly more of a grind in practices since you are going every minute. It’s good. I really enjoy it.”

Warren has a very detailed schedule each day which he really appreciates.

“I wake up at 6 a.m., shower and go to school,” said Warren, who attends Northville High School. “We leave school at 12 and I get here and have lunch. We get on the ice, have practice and even off-ice items. We leave here around 5:15 p.m. I go with two of my teammates [Cole Caufield and Ryan Siedem] to Red Olive after we skate and have food there. I got back home, do my schoolwork and spend time with my billets and eat again and do more schoolwork. It’s then time to go to bed.”

The schedule can be a grind, but Warren never gets tired of wearing the colors of his country.

“It’s an honor,” he said. “I’m from Long Island. A few kids from the Island have played for the NTDP before and they were telling me how that every day it’s an honor to wear it and it really is. It’s so cool to see the crest and represent the country. It’s something that I always wanted to do.” 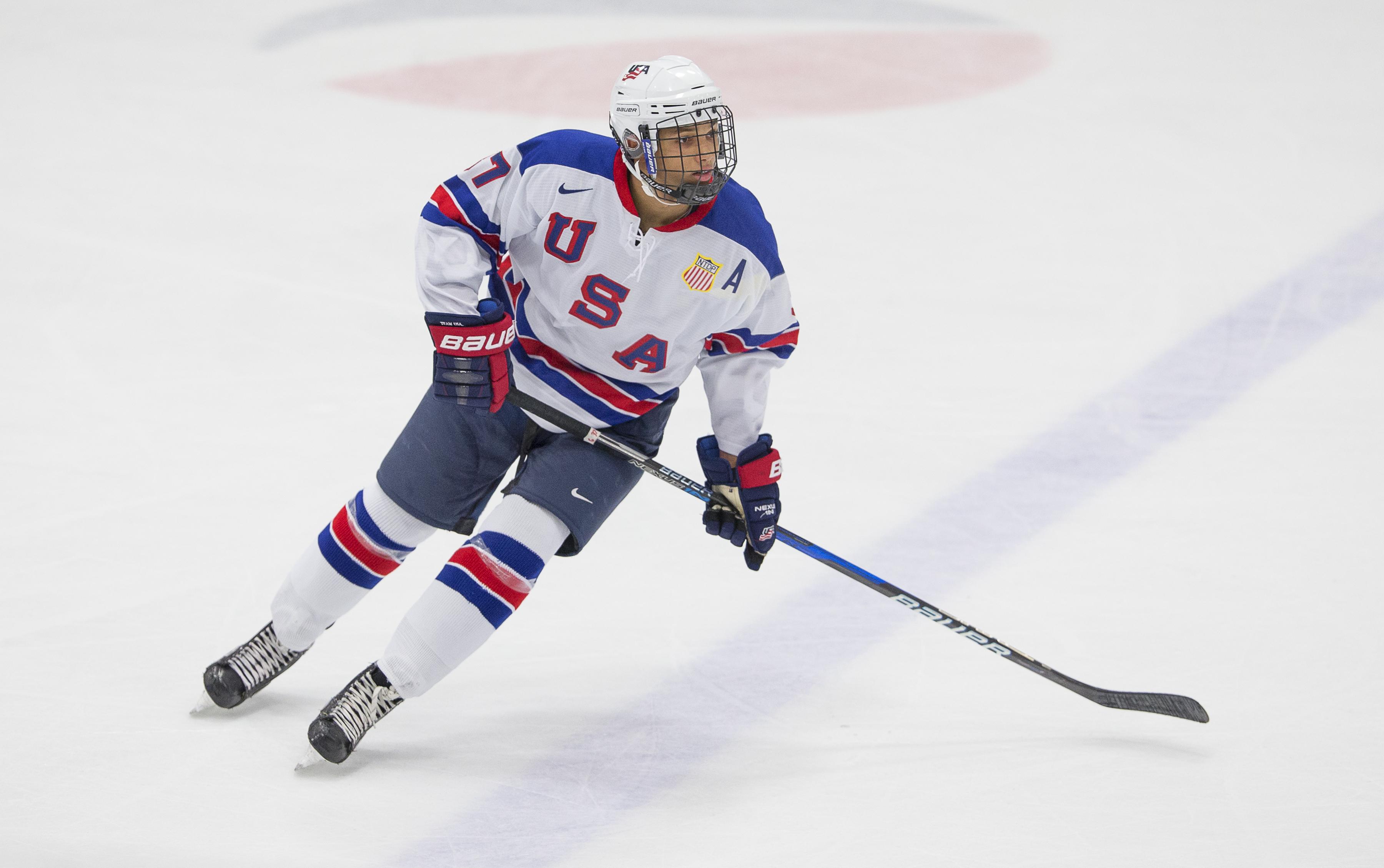 Warren is busy soaking in knowledge and information from the Under-17 coaching staff — head coach John Wroblewski, assistant coach Greg Moore and intern coach Kevin Lind — to help improve his game. He appreciates these lessons.

“Coach Wrobo has told me that you need to attack everything you do, whether you are going into a meeting or into warm ups. Everything you do, you have to act like a pro,” he explained. “Coach Moore is the defense coach. He gives us little techniques and he has really taught me how to stay positive throughout the game. Coach Lind is a great guy and he is always there for us. They definitely tell me to stay positive.”

Warren appreciates the fact that two of his coaches are former NTDP players so the skate has been on the other foot for them.

In addition, he can turn to some former players from Long Island who have had the same NTDP experience and can give him some valuable advice.

Warren and his U17 teammates are coming off their first international tournament, the U17 World Challenge which ran from Nov. 5-12. The team returns to action on Friday, Nov. 17 when the U17s host the Chicago Steel at USA Hockey Arena. The U17s are currently 3-1 in USHL play and Warren credits the team’s speed for their early season success.

“We are a fast team,” he said. “I think that speed does kill. You see that a lot in hockey; speed is a major factor. Some people cannot handle speed — size is always there. Coach Wrobo loves to win and I have never met a more positive or outgoing guy. He is definitely the one leading the ship.”

With the way Warren’s career is going, it was worth the wait.