First strides as a toddler have led the forward to the NTDP. 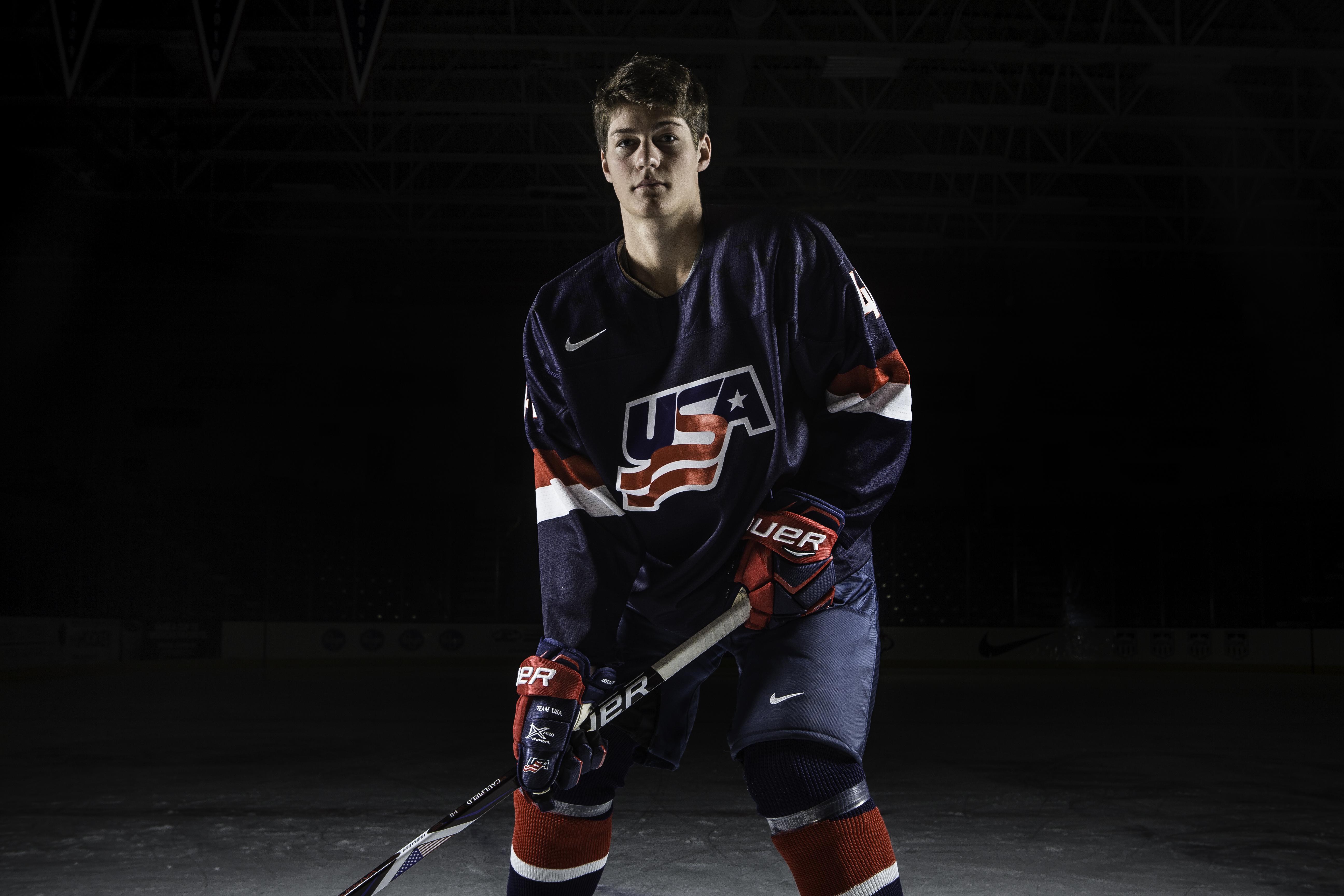 Many hockey players get their start playing outdoors. Judd Caulfield only had to step into his backyard.

Caulfield’s dad built the family an outdoor rink, and from then on, he was hooked. He was just 2 ½ when he started playing the sport he loves.

“My dad grew up playing hockey so he influenced me a lot,” explained Caulfield. “He built the rink in our backyard so my brother and I would always go out there and skate all the time. My whole life I have had access to a rink in my backyard. My parents didn’t yell at me too much for being out late in the yard; they encouraged it a lot.

“Growing up in North Dakota, you get used to the cold and being in the rink always feels nice.”

His dad, Bob, played college hockey for Miami University and Division III Gustavus Adolphus, and was drafted by the New York Islanders in 1983. Bob Caulfield was always there to offer assistance to help his son improve his game.

“It has been all positive stuff,” said Judd on his dad’s influence. “He is always pushing me to be my best and encouraged me when I have had slumps in my career. He coached me a little during by summer hockey but never during the winter.”

Caulfield was an integral part of the state championship team last year at Grand Forks Central High School. He finished the season with 25 goals and 64 points in route to earning All-State, All-Eastern Dakota Conference and All-Tournament Team honors.

“It was a great experience getting to win the state title,” he said. “I liked hanging out in the locker room with my teammates. It was the first time we had won a state title since 2010 but it was the 26th time our school had won the state tournament. Grand Forks is expected to win.”

Caulfield jumped at the opportunity to move to Plymouth, Michigan and play for USA Hockey’s National Team Development Program. Things have been going pretty smoothly for him, except for being away from his hometown friends and family.

“There hasn’t really been a hard part but being away from my family and friends is tough,” said the 6-foot-2, 197-pound forward. “I still get to see them. They were able to come and watch me play both times we went to Minnesota. They are planning to come to Sioux Falls [South Dakota] too.”

Caulfield has had a strong showing to the start of the season, including in the two games against the Minnesota Elite League on Oct. 14-15. He tallied two goals and three points in the two games, including the game-winner in overtime.

“It was fun to play in front of my family and I had the overtime winner,” he said. “On the play, [Alex] Turcotte made a nice play, drove the net and drew the D back. All I had to do was shoot the puck and it went in.” 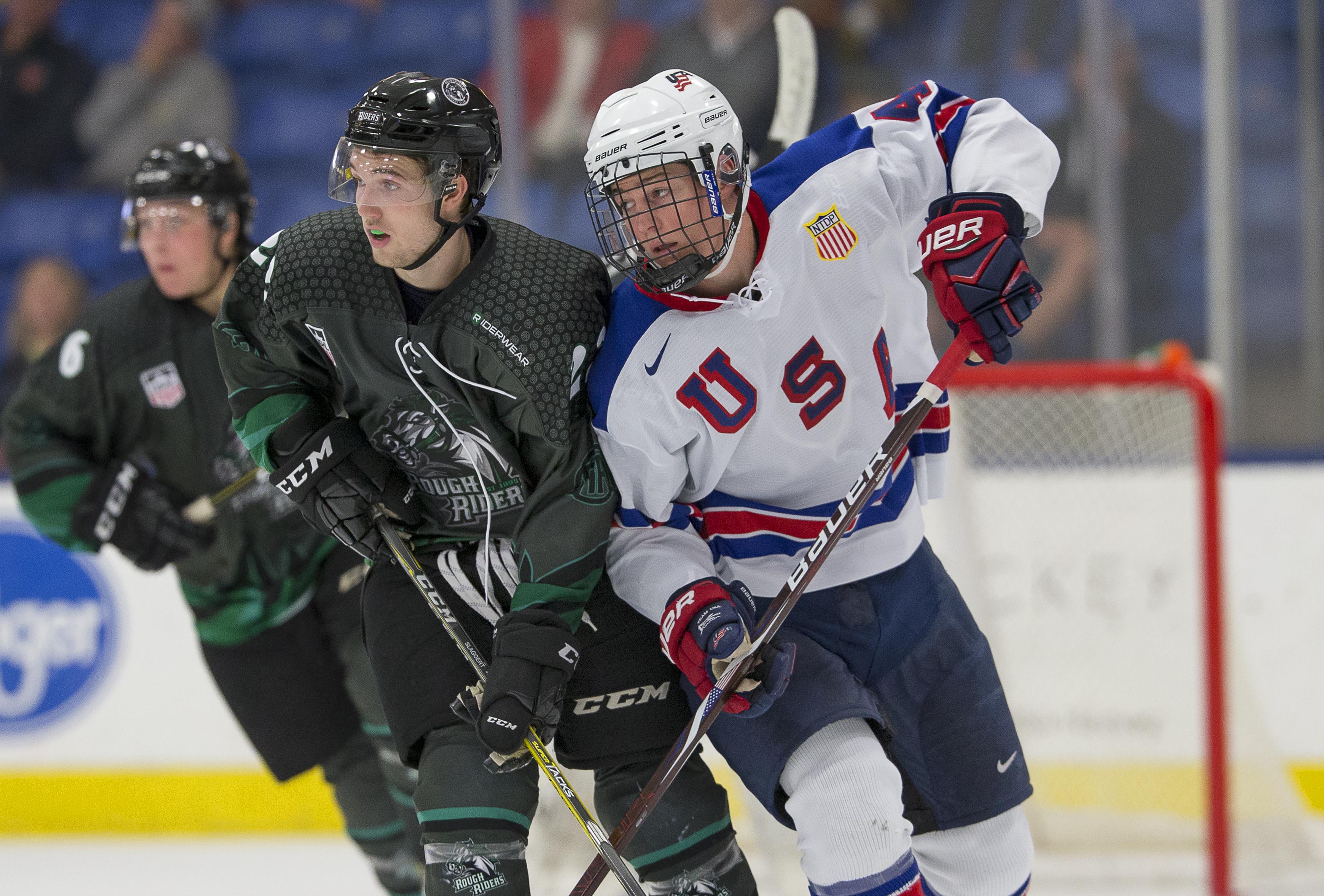 Caulfield and his Under-17 teammates have had plenty of early season success on the ice. He credits the team’s mentality for those early victories and it really comes down to one simple ingredient.

“Our consistency throughout practice really carries over to games. We have a hard-working group and that really leads to our success,” he said.

He has head coach John Wroblewski to thank for getting the team through those practices with the right attitude.

“Never take a day off. You have to bring it every day to succeed,” said Caulfield on his coach’s advice.

Caulfield and his teammates can definitely use this advice to their advantage as the squad heads to its first international tournament — the Under-17 World Challenge from Nov. 5-11 in Dawson Creek, British Columbia. Team USA is paired with Canada Black, Canada White and the Czech Republic in round-robin play while Finland, Canada Red, Sweden and Russia are in the other bracket.

“Our main goal is to obviously win the tournament and I think we will have a great chance,” said Caulfield of what the team expects. “We just have to go out there and play our hearts out and work hard. I’m excited for all the games. It will be fun to play Canada — it’s definitely a big rivalry.”

Caulfield had an easy decision when it came time to pick his future college. After all, the Grand Forks native grew up with the University of North Dakota practically in his backyard and he grew up rooting for his hometown team.

“It had always been a dream of mine to play for North Dakota,” he explained. “I grew up watching them, ever since I could understand hockey. The coaching staff there is unbelievable and the facilities are top notch.

“We had season tickets growing up so I would get to go to at least one of the home games during a weekend. I loved watching Zach Parise and he is still my favorite player today. My dad takes the pictures for the hockey team so I was able to go into the locker room with him and get some autographs from Parise and [T.J.] Oshie. I have been connected and it’s been really nice.”

It’s another chance to stick close to home for the former backyard skater.