Family tradition fueled a passion for the sport 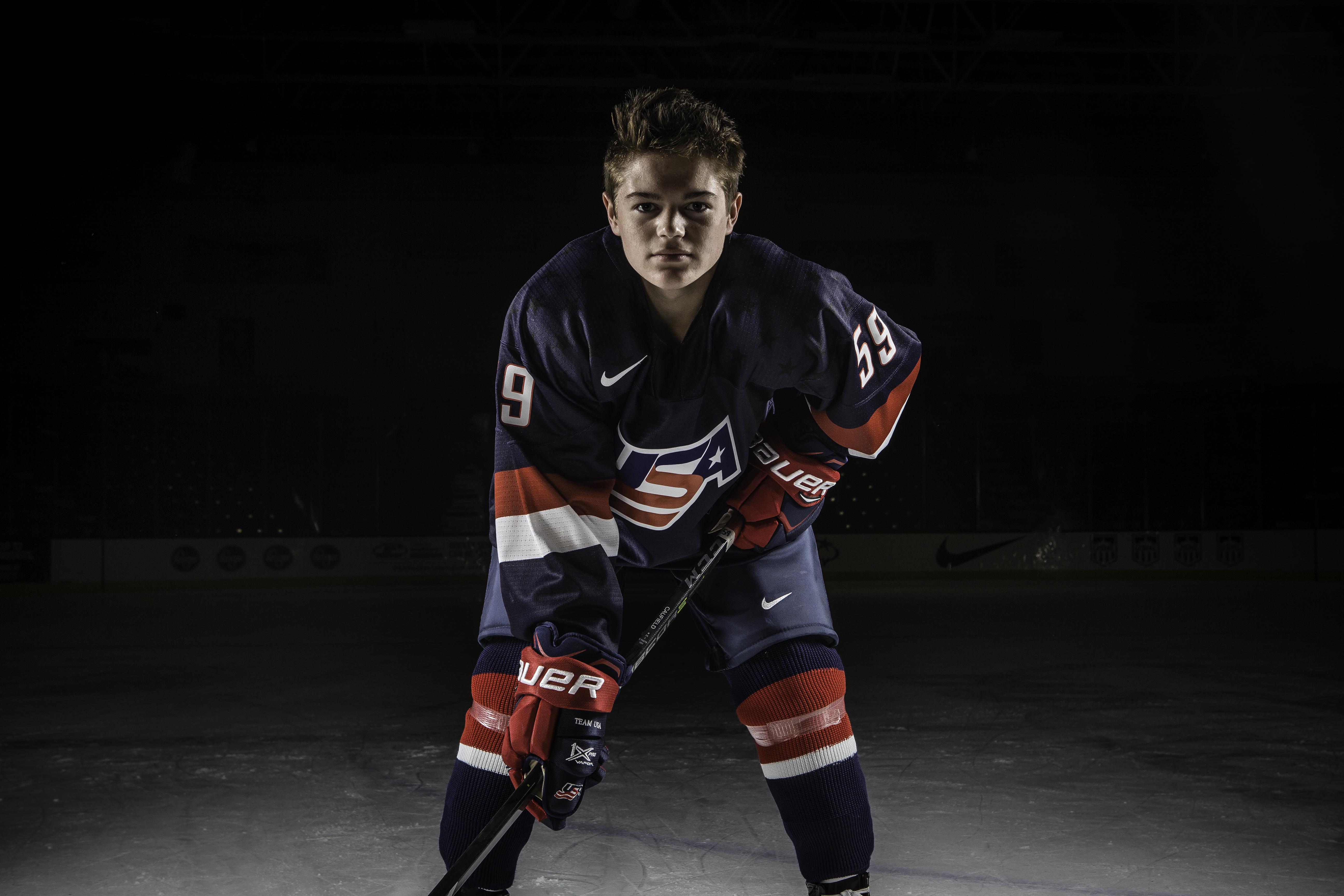 It may have taken a little begging, but once Cole Caufield’s mother relented and got him his first pair of skates, he got out on the ice and never looked back.

“I started playing hockey when I was two,” Caufield said. “My brother Brock, who is two years older than me, was skating at the time and I was watching him. My mom told me that I cried to her and begged her to skate. That is where it all started.”

There was just something about hockey that stuck with Caufield through the years and it is what keeps driving him still today.

“Hockey is a physical and mental game,” he said. “You cannot win on skill alone instead you have to work every shift. You have to prove yourself every time you step on the ice. It is not a game that you can show up and play, rather you have to work for everything you can get.”

Caufield, who grew up in Stevens Point, Wisconsin, had both Brock and his dad Paul as hockey influences as a kid. Paul played four years at University of Wisconsin-Stevens Point and is still the school’s all-time leading scorer with 254 points (126 goals, 128 assists). Meanwhile, Brock currently plays for the Green Bay Gamblers in the United States Hockey League.

“They have had the biggest influence in my hockey career. My dad played a huge part in teaching me the game while my brother pushed me and helped shape me,” said Cole. “I was always skating and working out with him. I looked up to him as a person — he is a great guy and my best friend.

“We did get into a couple of fights but it is about that competitiveness. We are always shooting, especially in the summer. We are always competing with each other and it’s a lot of fun.”

The brothers will face off against each other for the first time on Oct. 21-22 when the Gamblers head to USA Hockey Arena for a two-game set. Their parents plan to be in the stands and may have to choose their attire carefully so there are no allegiances to either son.

“We have played together in the past so it will be strange to play against him this year,” Caufield said.

Caufield had the unique experience of having his dad as his youth hockey coach. He still remembers one important lesson that his dad taught him when he was growing up.

“My dad was my youth coach all the way up until I played for Team Illinois when I was 13 and he coached my brother too,” said Caufield. “The biggest thing he taught me is this one quote — that once you are satisfied, it’s time to quit. Every time he got on me, he wanted me to get better and be the best I can be. It’s not because he is mad at me, rather because he knows I have more in me and I can improve.”

That lesson came in really valuable as Caufield earned a spot at USA Hockey’s National Team Development Program top 40 camp last spring and ultimately earning a spot on the Under-17 roster. It was something he had worked for since he learned about the program. 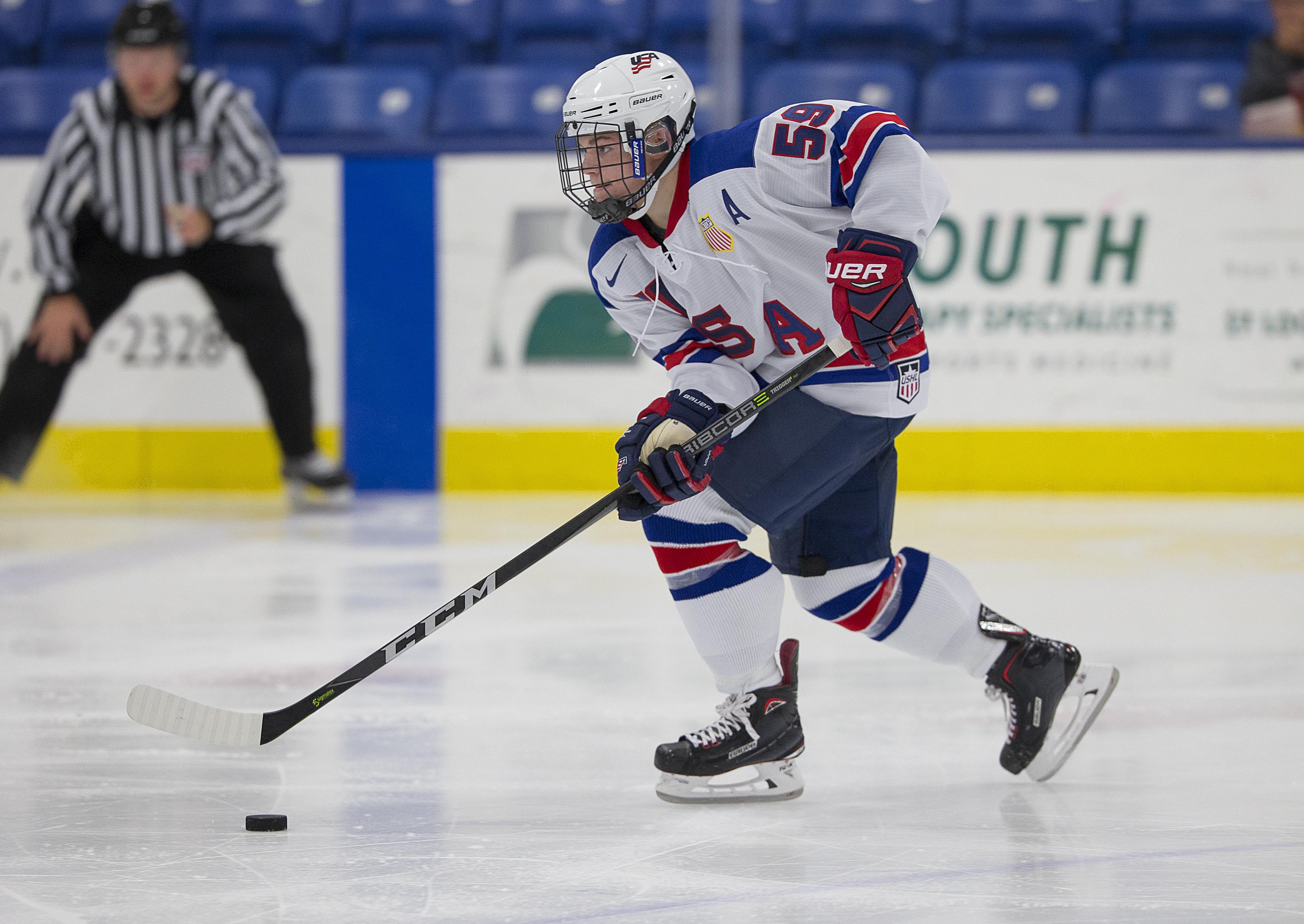 “It was a dream come true,” he said. “It is a great honor to represent your country. To be with 22 other guys who want the same thing as you and they want to get to the next level. You want to work hard every day to be a better person and a better player.”

And it also helped that he knew many of his teammates already.

“I played against most of the players. It’s nice to get to know them and play on the same team,” he said.

The most difficult part of the transition for Caufield was the practice schedule. It was something he had not previously experienced.

“Practice is the [biggest] change. You are going against the best players in practice and you have no days off. You have to bring everything you got to practice, every day,” he explained.

With all the work he has been putting in both on and off the ice, the 5-foot-6, 146-pound forward has noticed just how much his body has changed over the last few weeks. He has five goals in the first three games. Caufield and his U17 teammates will practice this weekend before heading to Minnesota for two games against the Minnesota Elite League.

“I noticed all the work you need to be in every day,” said Caufield. “You have to come to the rink and get better each time. You want to leave this rink every day knowing that you did something to improve yourself. It’s a different change from what you are used to but I’m kind of used to it already. You have to get your body used to it and it is kind of fun.”

One thing Caufield will never get used to is the pride he feels when he puts on his USA jersey, each and every day.

“It means everything,” he said. “Putting it on for opening night was probably the best moment of my life. You really think about it when you do put it on. It really is a great honor to wear that USA crest and represent your country. It’s more than just a jersey.”

And that is why hockey means so much to Caufield.