A converted forward, it was a lack of scoring goals that led him to try stopping them 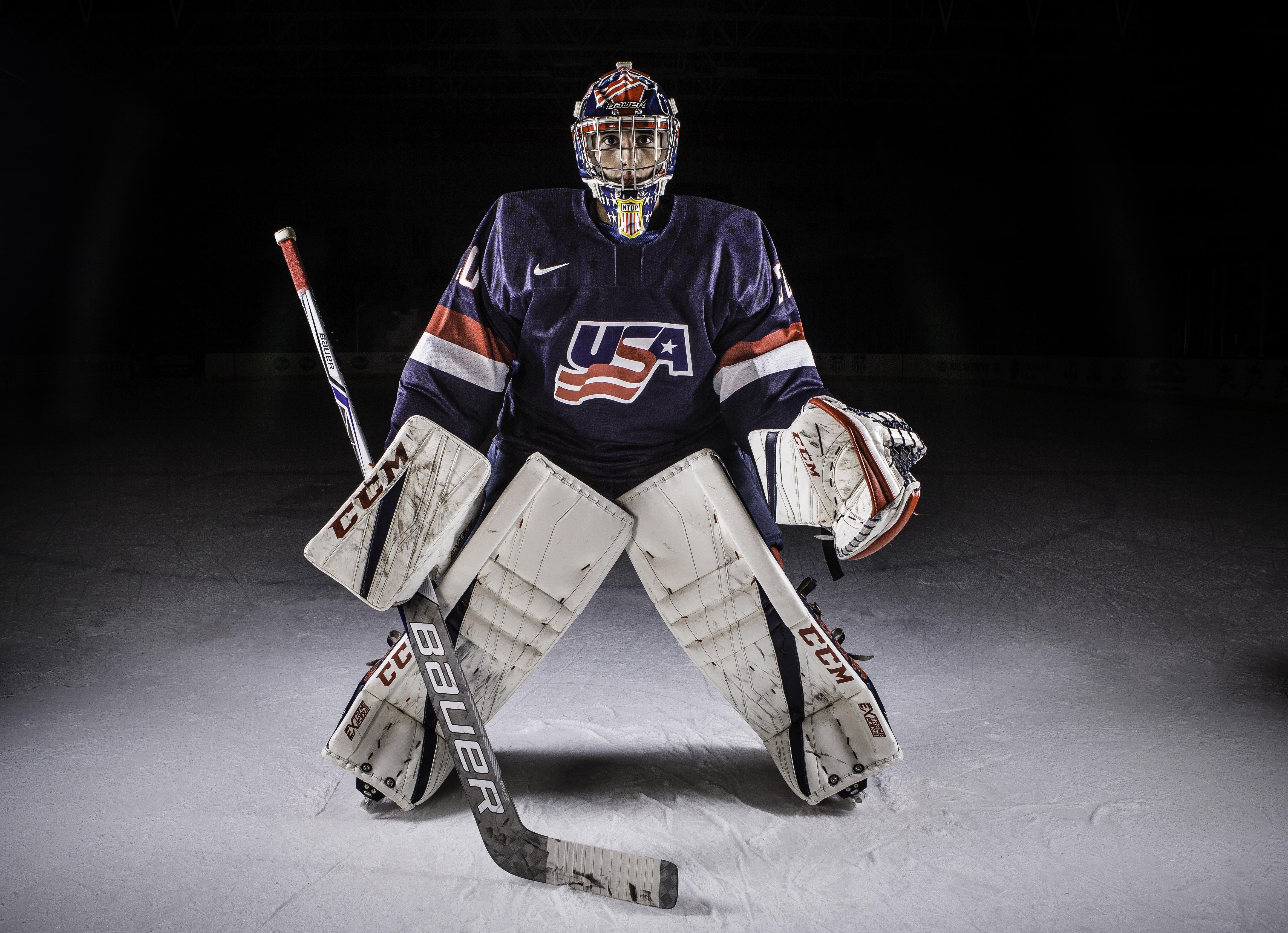 Playing goaltender was not Jonathan Mor’s first position choice when it came to hockey. Rather, it ended up being his inability to score goals that led him to manning the nets.

“I started skating when I was eight years old,” he explained. “I always had a desire to skate. I started as a forward for one year as a squirt minor. I scored one goal all season and it was in the last game of the year. It was an icing shot and it was my only shot too.

“My parents said, ‘This is obviously not working out, and if you can’t score goals, why don’t you try stopping them instead?’ I fell in love with it the minute I stepped onto the ice and just stuck with it. Here I am today.”

The funny part of the story is that no one in his family grew up playing hockey. His parents — Adi and Kim — grew up in places where ice hockey is not even played.

“No one in my family played hockey. My mom is actually from Hawaii and my dad is from Israel so there is no ice in those two areas,” explained Mor. “I played every sport when I was a kid — baseball and basketball and a little bit of soccer. There was something about skating and the ice that I just fell in love with when I was growing up. Hockey won out. I started focusing on hockey in eighth grade.”

Even though there was not much hockey in Mor’s background, his parents did learn about the sport when they first moved to Chicago.

“My parents both moved to Chicago when they were younger,” said Mor, who grew up in Highland Park. “My dad moved as soon as he got out of the army [around 23]. In Chicago, the Blackhawks were a huge part of the community and my dad was a fan. My mom moved to Chicago when she was 18 and would see Hawks games too. They knew about hockey but I don’t think they ever believed they would have a son who wanted to play hockey.”

In addition to his parents, Mor has a sizable cheering section. He has seven siblings — ranging in age from 14 to 37 — so there was never a dull moment in his house growing up.

“It was always fun,” he said. “I have a really great family and they mean the world to me. They always have my back and it’s good I have someone I can rely on. My parents try to get to as many games as they can and my brothers and sisters tag along when they can. They are always around.

“One of my brothers played basketball growing up and my sister was a track runner. My younger sister played golf. We have actors and singers. It was a big blend. They are all trying to figure out where I got my hockey interest from.”

Favorite Sport (Outside of Hockey)
Watching... Baseball and Playing... Football

After playing hockey for the Highland Park Falcons, the Vernon Hills Ice Dogs and the Chicago Young Americans, Mor had a crazy three weeks in late January of 2017. He earned a call up to the USA Hockey National Team Development Program after a transition at goal. This year, Mor is on the NTDP Under-18 roster as a full-time player. 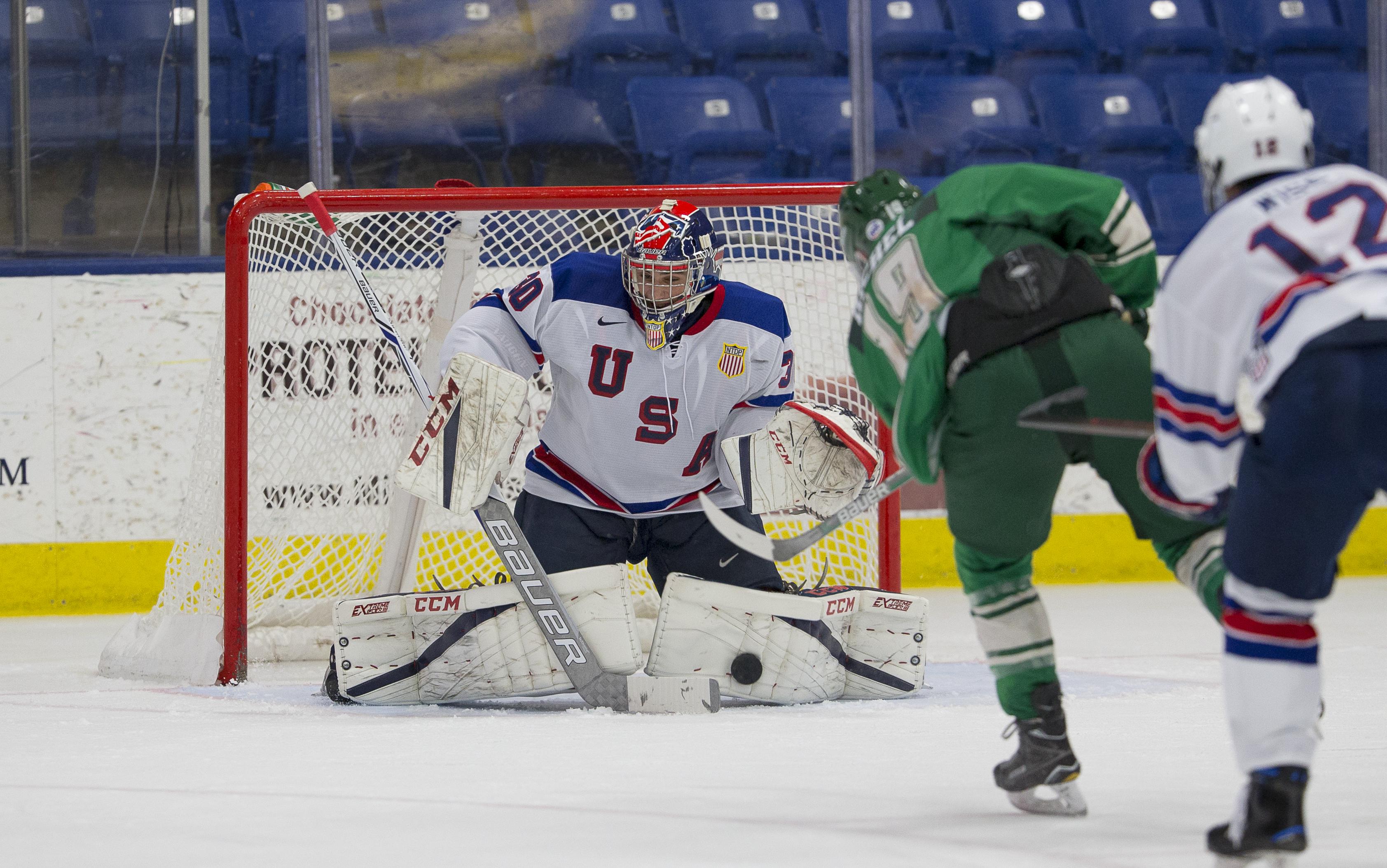 “Once I came up, I had a little bit of junior experience as I spent some time with Youngstown [Ohio] of the USHL,” explained Mor on his crazy schedule. “I got sent down for a week to Janesville [Wisconsin of the North American Hockey League] and then, I got called up here so I was all over the map. It wasn’t hard for me to blend in with the boys. I love them as my brothers. The most challenging thing was switching to three different schools in three weeks. It all came together and I’m extremely grateful and happy to be here.”

One thing Mor has felt so far is the pride he has for wearing the colors of his country each and every day.

“It means everything,” he said. “It’s the reason why we play. I get to represent my country every day and it’s just a true honor. I couldn’t ask for anything else.”

Mor has learned plenty about himself since arriving in Plymouth, but one thing stands out for him in terms of his development.

“Since I have gotten here, I have noticed that I have gotten a lot better with my skating,” he explained. “I feel I used to depend on my knees too much and I would slide to shots. Now, I feel like I am beating the shot there and I am on feet and tracking the puck. It’s a big advantage for me playing at this level.”

Mor, who stands at 6-foot-2 and weighs 193 pounds, is also learning how to use his size to his advantage in the net.

“It gives me the ability to back in my crease a little bit. It’s not like I have to be so aggressive on an outside shot. There is only this much net you can see when you are at the top of the crease and that is all I need to be,” he said.

He had an opportunity to showcase his skills at the CCM/USA Hockey All-American Prospects Game in Buffalo, New York, on Sept. 21. Mor, who earned the starting nod for Team Brian Leetch, stopped 10-of-12 shots as Team Leetch posted a 6-5 win.

“It was amazing and a great experience,” he said. “We played against some of my current teammates so I did my best not to let them score. It was a fun game to play.”

No matter what, Mor will take one thing away from his NTDP experience and he wouldn’t have it any other way.

“The boys and my team. They mean so much to me and I would do anything for them,” he stated. “I knew Drew DeRidder and didn’t realize that he would be here at the time. I knew [current U18 teammates] Jake Pivonka and Spencer Stastney as they grew up playing for the Chicago Mission and I played against them. We were rivals but now we are teammates.”

Teammates and friends. Mor understands the pressure of making that critical save to give his teammates a chance to win and he wouldn’t have it any other way.