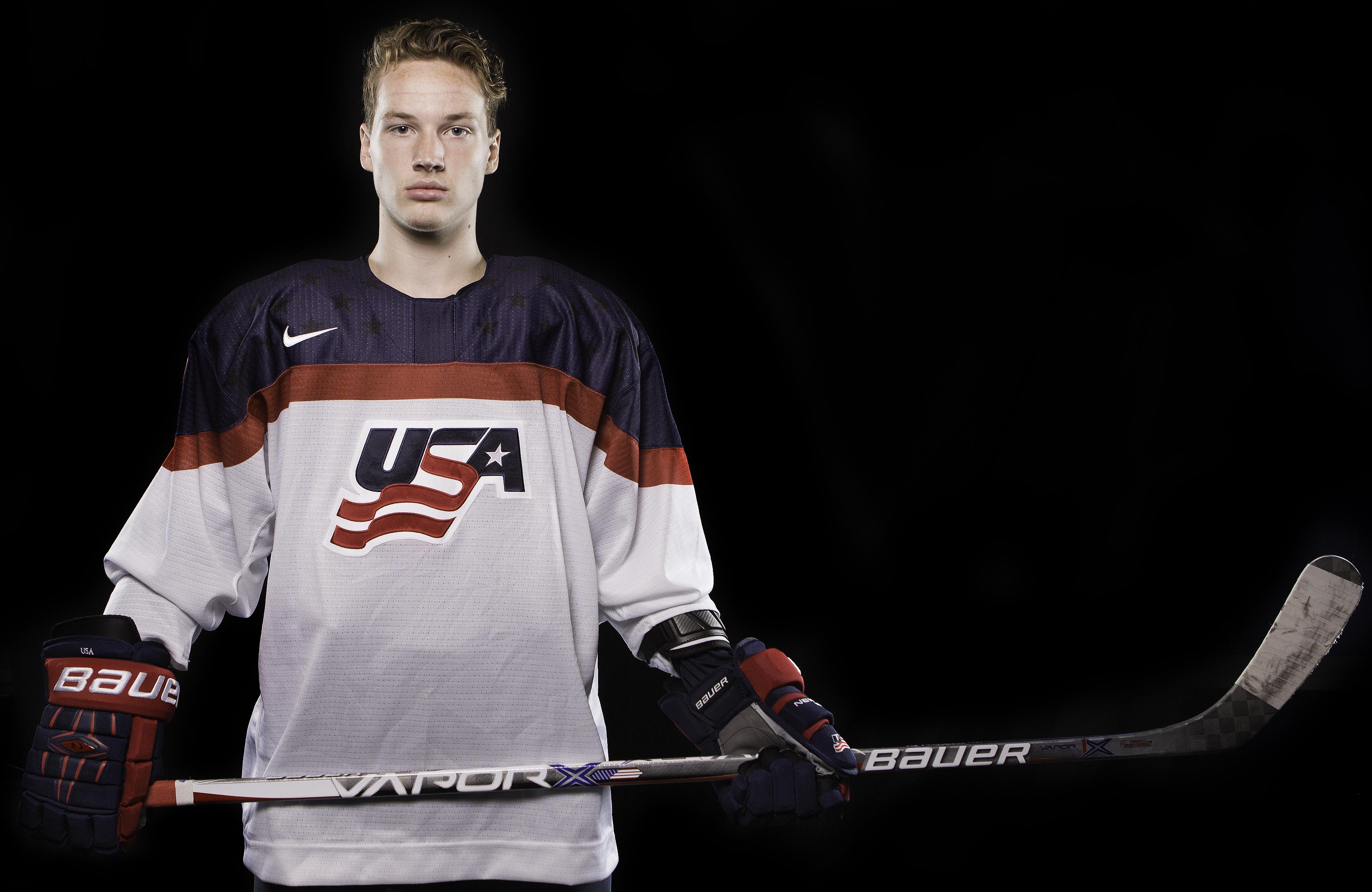 Growing up in Scottsdale, Arizona, Erik Middendorf had his choice of playing almost any sport. However, despite a climate that only sees snow a few times per century, hockey ended up as the one for him.

“I played every single sport growing up from basketball to baseball to lacrosse,” explained Middendorf, who started skating when he was 3 ½ and played on his first team when he was five. “You can name it in Arizona and I tried it. [When it came to hockey], I would come to the ice rink an hour early and would be the last one to leave every time I was there.”

Hockey was a family affair in his house, even if his dad was a football player.

“I started playing hockey because my dad’s whole side of his family, all of his brothers, played when they were growing up,” he said. “My dad played football at the University of Cincinnati, which was the same as my grandpa. He wanted to follow in his footsteps. Nobody else in my family played football.

“My uncle [Max] went on and played major junior and got drafted into the [National Hockey League].”

Growing up in a non-traditional spot for hockey, it really wasn’t until his 14U year that Middendorf really started to comprehend where hockey could possible take him. Of course, it probably helped that he also was able to watch former USA Hockey National Team Development Program standout and fellow Arizonan Auston Matthews (2013-15), who was the No. 1 overall NHL draft pick in 2016.

“I was just playing hockey for fun until my U14 year when I heard about the [Western Hockey League] draft and that is when I found out that I could do something in hockey,” said Middendorf. “I started to going to more games. I would go to the [Arizona] Bobcats games and saw Auston Matthews play. It just took off from there.

“When I was little, I didn’t know who Auston was since he didn’t play travel hockey. In his U14 year, the year before he came to the NTDP, he was a sensation in Arizona. He had a 100-and-something point season. I would try to go with my dad and my sisters to go watch him.”

In the end, it was Matthews who helped Middendorf know what he wanted to do in the game of hockey.

“I heard he was coming to the NTDP. When Auston came here, that is when I knew that I wanted to come here too,” explained Middendorf.

It should be no surprise that one of the first people to call and congratulate him after he made the team was Matthews. Middendorf initially thought it was a prank call.

“Auston was the first one to congratulate me on making this team,” said Middendorf. “He gave me a phone call and I honestly thought it was a prank call at first until I realized it was his voice. I have never spoken to him that much. It was really cool of him and it showed his character and how much he cares about Arizona hockey.”

The 6-foot, 173-pound forward sees himself as a role model for other players back home that have the same dreams as he did and want to pursue a hockey career.

“I am really excited to go back home and skate there. I am already planning on doing a clinic with my old coach,” said Middendorf. “When I skated with Auston, there were a ton of kids around the rink that came out to watch him. You could tell when he was there and the atmosphere in the rink was insane.

“I kind of hope that will be like me when I go back and people think it’s possible for them too. It is a non-traditional environment now but I do think it is growing and hopefully, there will be more kids that come out of there and get to play here.”

Middendorf, who tallied six goals and 18 points in 51 games, realized just how tough an NTDP Under-17 season can be. He learned plenty of things about himself over the course of the season.

“I learned that even though it’s a really hard year, you can see the light at the end of the tunnel,” he said. “It was a really fun but tough year for us. I had to pick up my game. I had to get faster. The coaches would help me after practice. They would show me something new almost every day. I would go to the shooting room or the gym to try and get better. I think it’s night and day from the start of the year in just how quick and how much bigger my body has gotten. I have a ton of plans for this summer to get better for my [Under-18] year.”

In addition, he had to deal with a major change in weather, moving from the Valley of the Sun to Plymouth, Michigan.

“From the weather aspect, I kept hearing how harsh the winters are,” he said. “Even from my billet family, they would always yell at me since I only had shorts at my house. They had to go shopping with me to get warm clothes. Every holiday, they will get me a sweatshirt or a pair of sweatpants. It was a long winter for me for sure. I’m excited to get into summer. When I go home, I will tell them it’s 80 degrees and sunny in Scottsdale right now. They will turn their heads and be mad at me.”

Middendorf has learned to love the weather since it means he gets to wear the colors of his country, each and every day.

“It’s really special,” he said. “Coming to the rink here every day, it’s exciting to throw on the emblem. I got my first taste at the Youth Olympic Games with a handful of boys from this team. It was unlimited energy and excitement from the guys in the locker room. Once we won that gold medal, it was the best feeling in the world.

“It was my first taste of international games and I remember we played Russia in our last round robin game and if we won, we would have to play them again. We ended up beating them. Oliver Wahlstrom ended up getting injured that game so we knew we would have a tougher game the next day in the semis. We knew it would be hard to beat that team twice in a row. That was one of the craziest games I have been in. The gold medal game against Canada was good too. I think the two wins over Russia really helped us.”

That experience drives Middendorf to improve this summer and get ready for his second season with the NTDP. After all, he wants an opportunity to play for another gold medal.

“I need to get faster and quicker on the ice so it will be mostly skating and off-ice stuff,” he explained. “That will help with the power skating that I will do back home in Arizona. I need to put on weight too and that is my goal but not too much weight. I do not go many days without swimming laps in my pool back home.

“This is a really special group we have and I’m really excited for next year. Once we put it all together and get the confidence in the USHL. It was hard to play in the USHL this year and next year, hopefully, we can dominate and play better internationally.”

Plus, he is looking forward to having a mini-reunion back home this summer.

“They do this thing in Arizona where they bring back everyone who still plays. I get to see all my buddies and skate with them, pretty much every day with them,” he stated. “That is a cool feeling. I grew up with them my whole life. It’s great to see the older guys who come back. I have a few buddies in the USHL and in the NAHL. It was be great to see how they developed.” 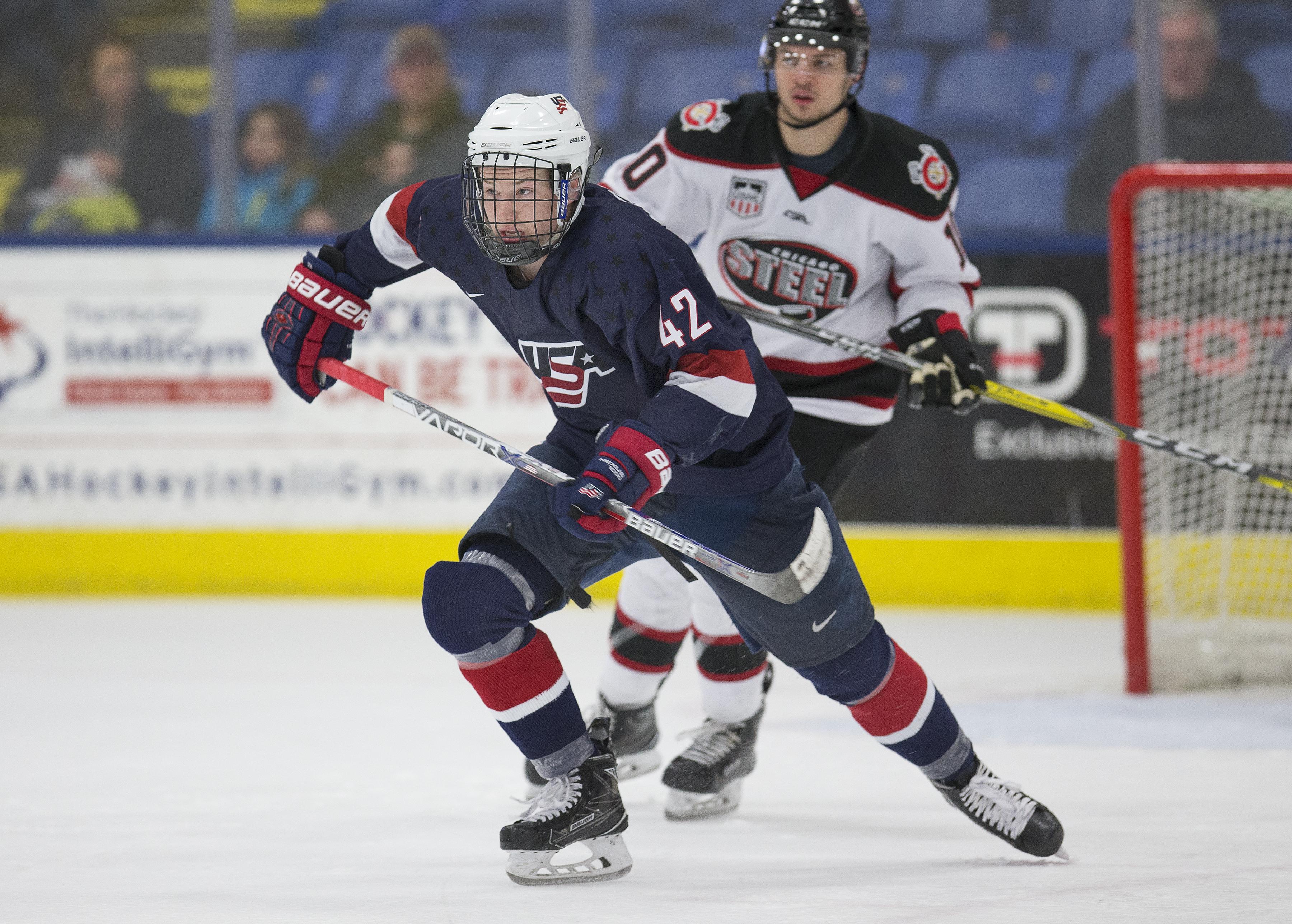