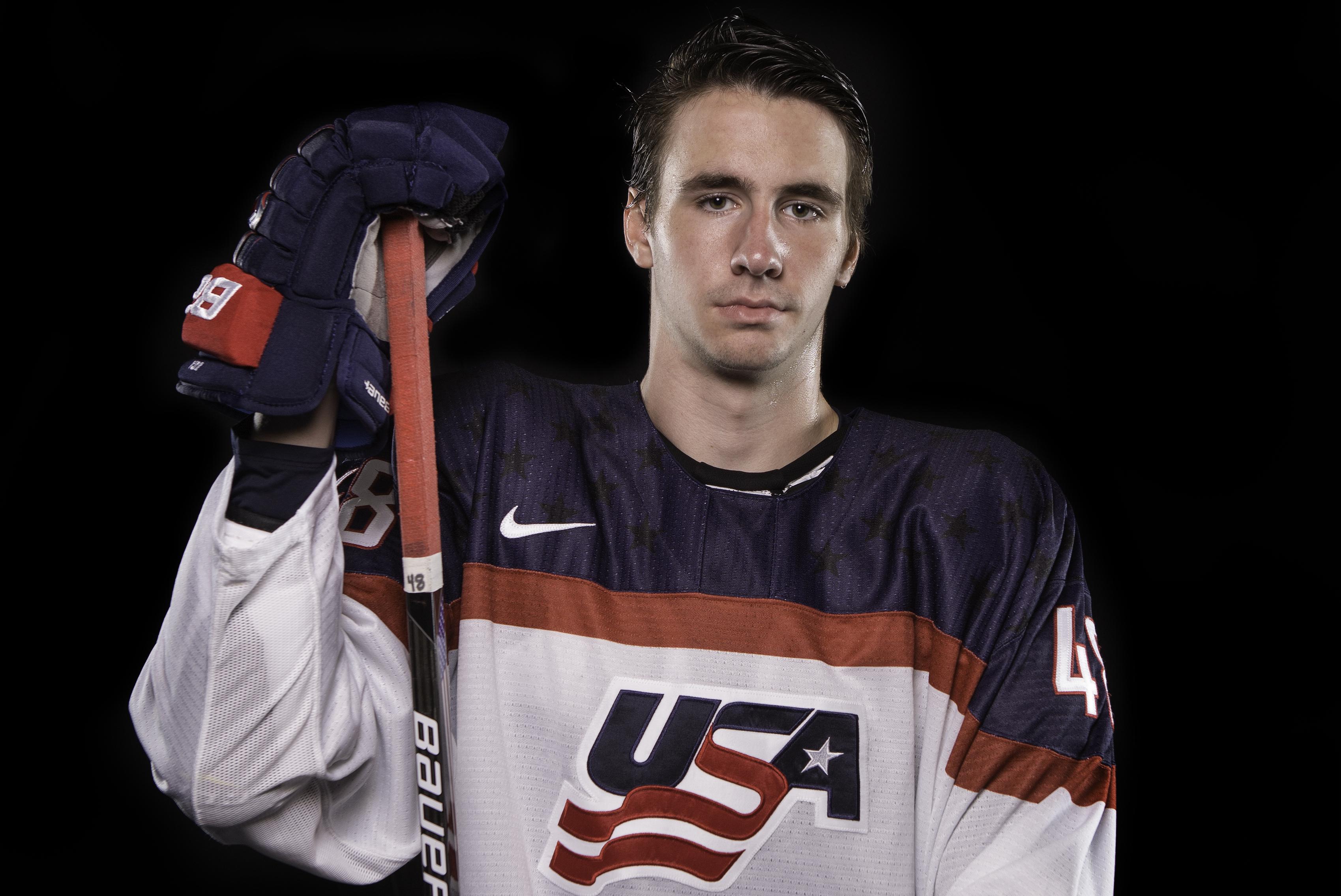 One of the highlights of Mattias Samuelsson’s hockey career was winning the gold medal at the 2016 Youth Olympic Games in Lillehammer, Norway. To make it even more special, Team USA posted a 5-2 win over Team Canada en route to winning their first-ever medal at the event.

“We dreamed about [winning the gold medal] going in but I never thought that it would become reality,” said Samuelsson. “[Under-17 teammate] Tyler Weiss ended up getting an empty net goal with about a minute left. I was on the ice and I saw the puck go into the net and we were up by three.

“I think that is when I realized that we just won a gold medal. It really didn’t hit me until then and I was living on a high for two weeks. I didn’t take the medal off until I got home. I wore it the whole plane ride.”

Samuelsson says the Youth Olympic Games was one of the best experiences of his life.

“It was the best two weeks of my life. It wasn’t just hockey,” he explained. “You got to spend time with the skiers, the snowboarders, and the figure skaters. There was curling too. You got to see all types of USA athletes and where they come from. Playing on the Olympic stage, it was definitely something special.”

Maybe that is why hockey plays such a huge role Samuelsson’s life. His father Kjell played 14 years in the National Hockey League with stops in Philadelphia, Pittsburgh, Tampa Bay and the New York Rangers.

“My dad played professional hockey. Since the time I was born, I was involved in hockey,” explained Mattias. “I started skating when I was just a couple of years old. My whole family has been involved in hockey. My older brother [Lukas] played and I wanted to be just like him. I just fell in love with it.”

His dad retired from the sport in 1998, and then got involved with Mattias’ hockey career and became a huge influence for him.

“He has played a major part. He taught me everything I knew when I was young,” he said. “He taught me how to skate. I definitely got my passion in hockey from him.

“He was never my head coach. He would just help out with practices every now and then. He was always around but never officially my head coach.”

Becoming a defenseman turned out to be an easy decision for Mattias. After all, it just seemed like a natural position for him.

Samuelsson, who hails from Voorhees, New Jersey, credits the USA Hockey National Team Development Program with helping his game grow this past season. He finished the year with six goals and 14 points in 37 games.

“I think I improved everywhere this year,” he said. “I think I learned how to control the game a little more with the puck. I was able to learn how to dictate the pace of play.

“We did a lot of 3-on-2 drills this year. We end up giving up a lot of 3-on-2s during our U17 year and we take a lot of odd man rushes back. Every day in practice, we are working to improve on this aspect.”

More than anything, he says the training has made a big difference in his game.

“I came in at 195 and I’m 215 now. I was skin and bones when I came in,” he explained. “Every day you are doing something. Your only day off is Sunday and it is much needed. Every day you are getting better, whether you are improving something or getting stronger. When you are on the ice, you are willing to do the little things, competing with the best players of your age every day. I don’t know where else you can get that, especially in the offseason.”

That is a big reason why wearing the colors of the United States is something that Samuelsson appreciates each and every day. He understands the significance of what it means to wear the jersey.

“It’s an honor,” he said. “Every day, when you look down, the logo is on your helmet, your gloves, and the sticks. Everywhere you look, you realize you are representing your country. There are only so many kids who can do this every year. To be one of the lucky few, it is an honor especially for the whole season.”

He has a few favorite memories from his first season with the NTDP.

“Playing against Sweden was pretty cool, even though we lost [a 3-2 decision on Feb. 8 in the Five Nations],” said Samuelsson. “My dad is from Sweden so I had never played them before. I’m not sure whose side he was on, or who he was cheering for.

Samuelsson knows he needs to continue to work over the summer to prepare for his Under-18 season. He has a few plans in place.

“I will go back to Jersey, where I’m from,” he said. “I want to spend a little time on the beach and relax. I don’t skate too much in the summer, usually once or twice a week, but I will definitely be hitting the gym a lot. I also plan to work on some off-ice stuff.”

With that end goal in mind, Samuelsson would like nothing better than to be able to celebrate with his teammates at the end of next season with a gold medal at the U18 World Championship. 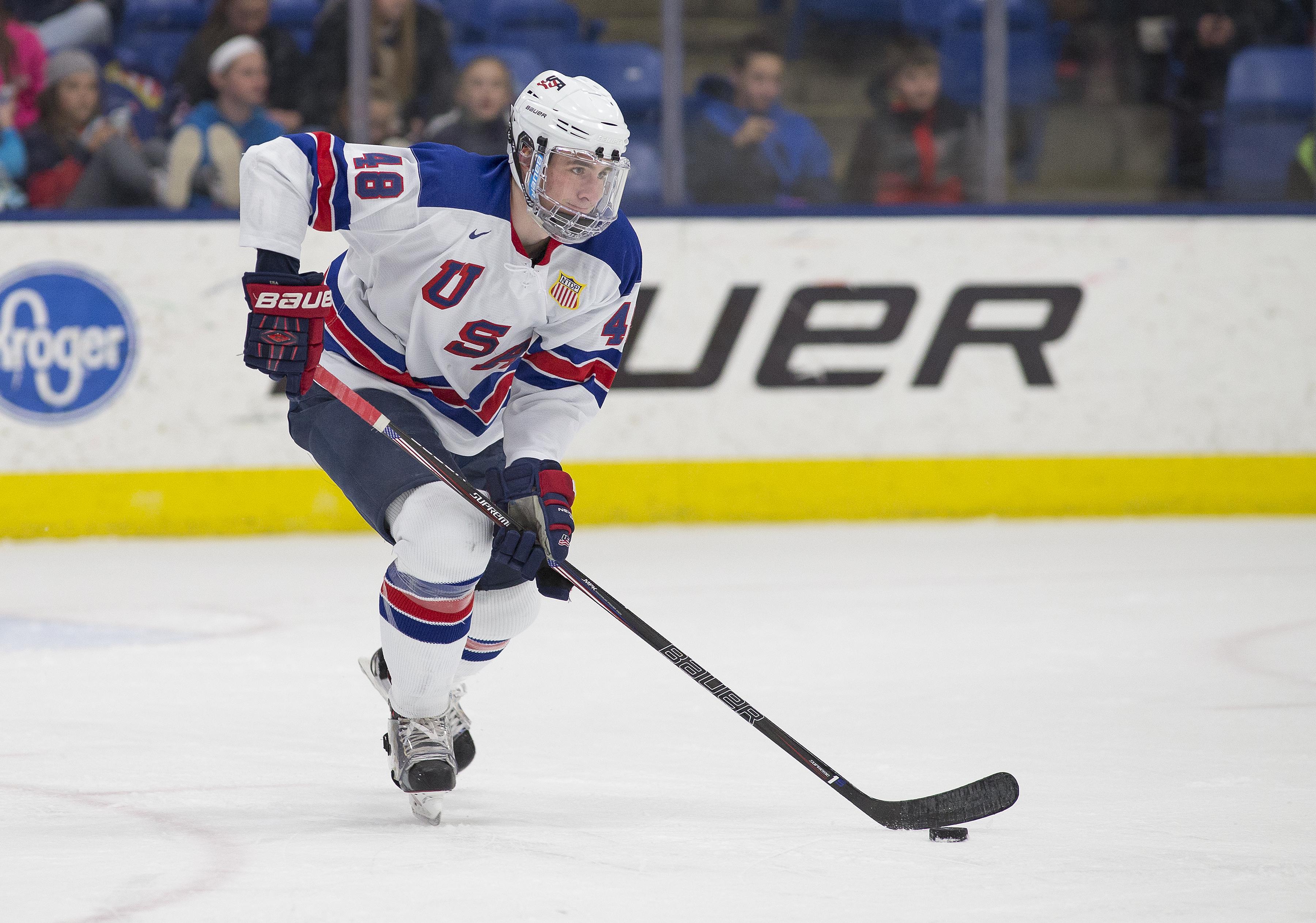 Favorite Book
Cat in the Hat by Dr. Seuss