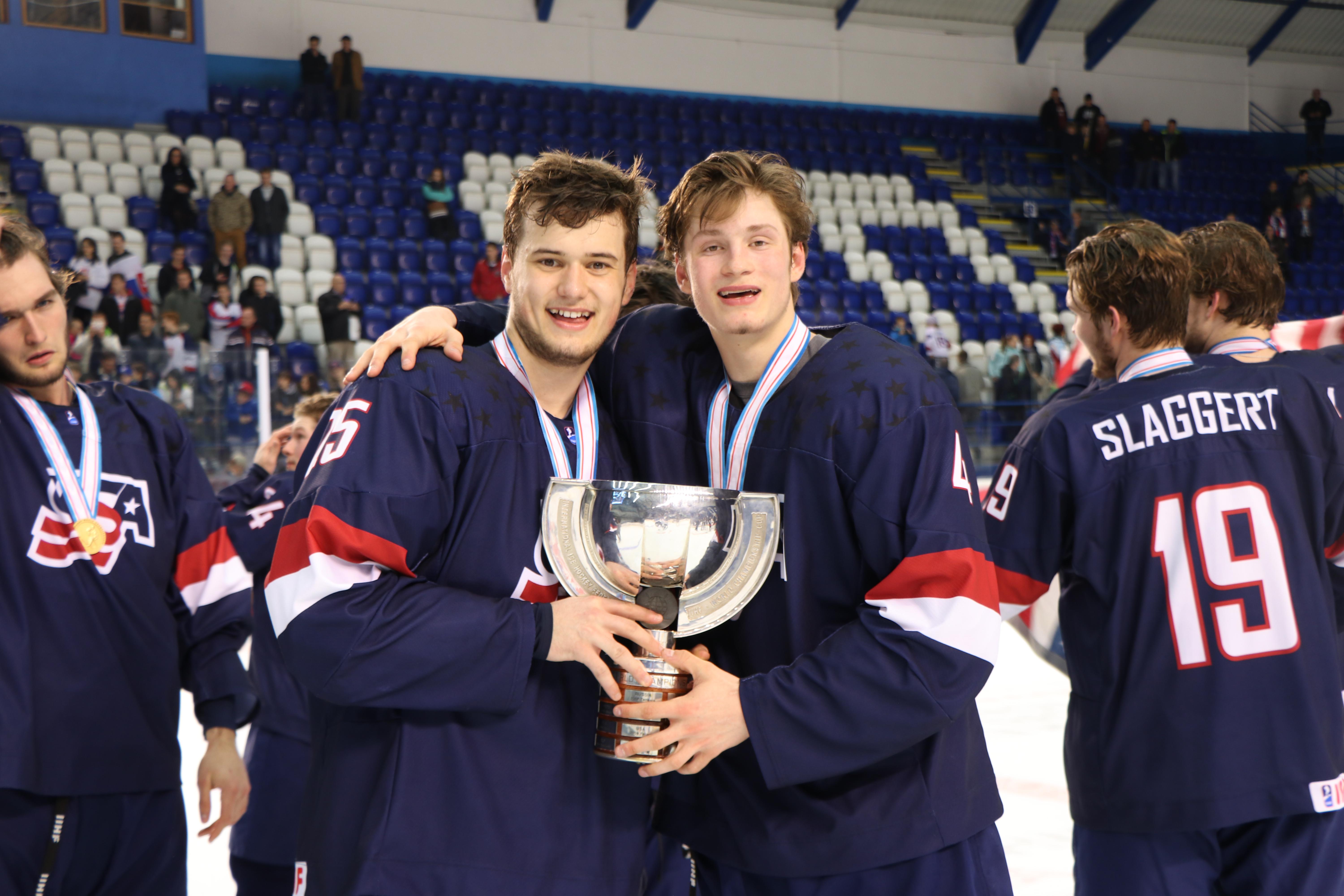 Oliver Wahlstrom has many memories from the 2017 International Ice Hockey Federation Under-18 World Championship, but he’ll never forget where he was when the U.S. clinched the gold medal.

“It was tough. I was serving a 2 and 10 when the buzzer went off,” he explained. “I threw my stick over the glass and the penalty box guy wouldn’t let me out of there fast enough.

“That feeling was something special. It’s tough to talk about; it hasn’t really hit me. It was the best experience I ever had.”

The ensuing celebration after Team USA posted a 4-2 victory over Finland in the gold medal game brought chills to Wahlstrom. After the final horn sounded, he remembers how emotional everyone was, including himself.

“It is something I have never experienced before,” he said. “It was such a special moment. Standing on the blue line with all 22 guys and singing the national anthem was the best thing ever. It hit you really hard and I was so emotional. At the same time, it was so much fun and we got to enjoy it after.”

The Quincy, Massachusetts, native was appreciative of the opportunity he had to play as an underager at the U18 Worlds. He did everything he could to soak in the experience and learn from the older guys.

“It was so special,” explained Wahlstrom, who was a member of the NTDP Under-17 squad prior to earning the call up to the NTDP Under-18s for the final 20 games of the 2016-17 season. “That group of guys and learning from them and everything we did, I looked up to every single guy on the team. I just felt comfortable around them. I had a good time around them. It was the best time of my life.

“They kept it loose by joking around. Since I was the rookie, they would mess around with me. I know it’s in a good way. I respect that and respect them. It was all in good fun. I really appreciate playing for them. It was a lucky opportunity for me.”

“I felt confident playing up,” the 6-foot-1, 198-pound forward stated. “I took everything in what Coach Wrobo [NTDP U18 head coach John Wroblewski] said and what the older guys did. I added it to my repertoire. When it came down to games, I tried to be myself and play hockey. I wanted to have fun even though it was high stakes.”

Wahlstrom is hoping to take some of the lessons he learned this year with the U18 squad to help his teammates next year when they move up to the U18s. He knows that he has some important knowledge to share.

“It’s important to have a team that everyone jells together easily,” he explained. “Everyone is together. There is no group. Everyone took in each other. It was a special moment because everyone bought into the system.

Nothing means more to him than being able to wear the colors of Team USA, which is even more special when it comes to international play.

“It’s special to wear the jersey,” said Wahlstrom. “You are representing not only yourself but the whole country. Every time you pull the jersey over your head, you are like, ‘We have to win this game.’ It doesn’t matter where you are, or what team you play, or what rink you are playing in, we have so many other countries that are against us. It’s a special feeling to put that jersey on.”

Wahlstrom credits his dad Joakim for his love of hockey. After all, his father was the one who introduced him to the game when he was young.

“My dad was a hockey player,” he said. “He played at the University of Maine and then, played professionally in Sweden. I picked it up from him and I just loved it. He has had a lot of influence [on my career]. He is my biggest fan along with my sister [Alexandra]. They support me no matter what.

“When I was younger, I was a feisty kid. I hated to lose in anything I did. I started to play hockey and I fell in love with it. Watching it on TV, every day I had to do something that involved hockey.”

More than anything, Wahlstrom can count on advice from his dad. He served as his coach for a short time but he stepped away and now can give him that perspective.

“The only thing I usually hear from him after tough games is, ‘Did you work hard and did you have fun?’” he explained. “That is the key thing I hear from him. At the same time, he has helped me get better.

“He coached me four years, playing up in Maine. He then decided to let me go and have fun and not be behind the bench and just watch.”

More than anything, his dad had to be proud watching him celebrate winning a gold medal. Plus, Oliver will have plenty of memories to share with his family. 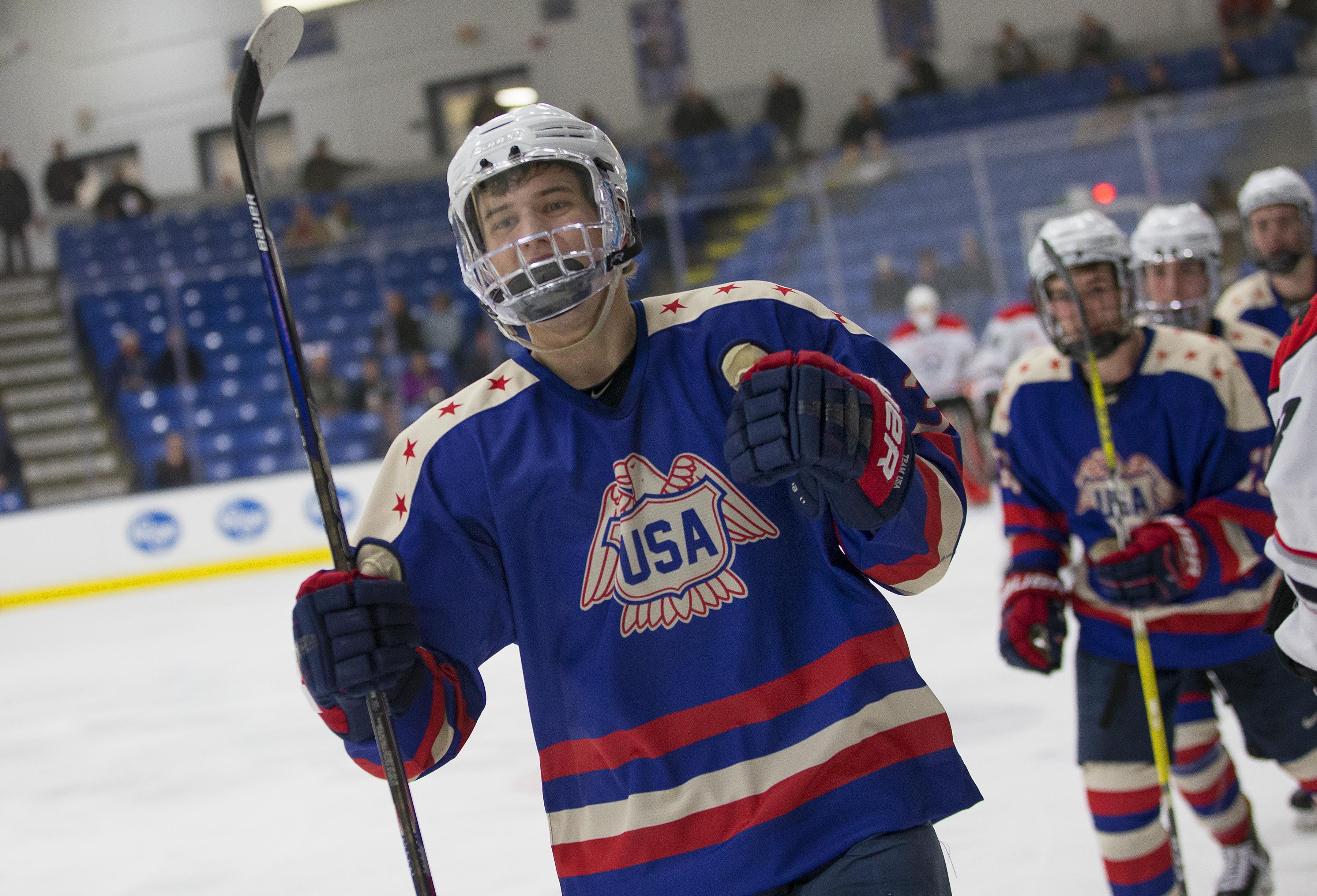 Favorite Pump-Up Song
"Light It Up" by Major Lazer