Hockey Was and Remains the Only Sport for Jake Wise

Floridian turned Bostonian has loved the game from the very beginning 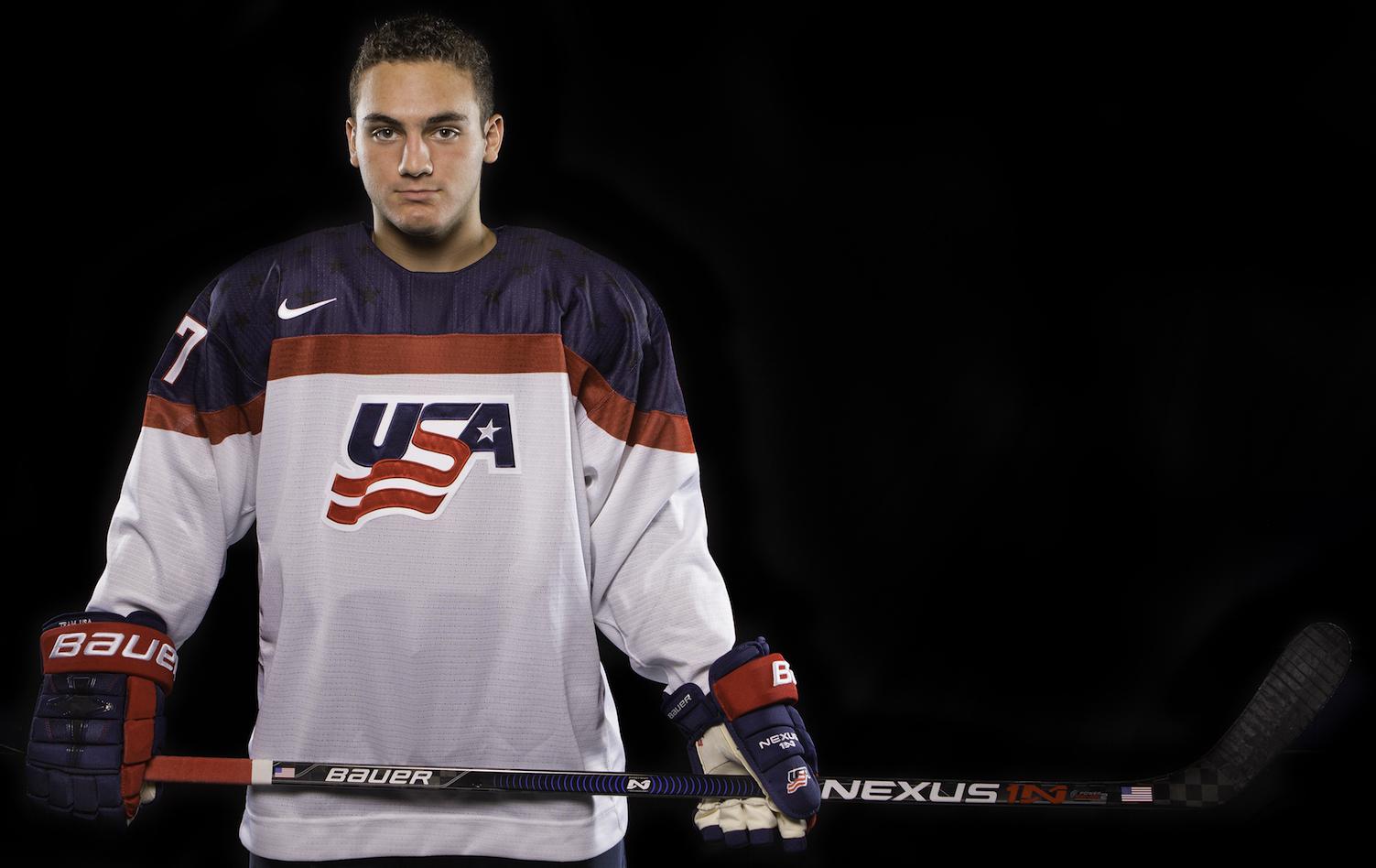 Growing up in Florida, there were many different sports that Jake Wise could try. But only one stuck out to him, and it was maybe the least likely of all for the Sunshine State.

“I first skated when I was two and started playing [hockey] when I was four,” explained Wise, who lived in Florida until he was eight. “My dad played when he was younger so he got me into it. I loved it ever since.

“I played baseball and that was the only other sport I played in Florida. I found it too boring. I loved the pace of hockey and I met a lot of my best friends in hockey. It was too hot outside for baseball. I kept going from there.”

Wise and his family moved to Boston when he was eight, and that is when hockey really took off for him. It was former USA Hockey National Team Development Program standout (2012-14) and current Buffalo Sabre Jack Eichel, who grew up in North Chelmsford, Massachusetts, that really piqued Wise’s interest in playing for the NTDP.

“I was 10 or so when I learned about the NTDP. My brother’s best friend’s dad is an advisor and he is the advisor for Eichel,” explained Wise. “Right when Eichel was coming here, he told me about it. That is really when I got into it and wanted to follow his path. I talk to him every now and then.

“Once I found out I made it, there was no question that I was going to come. He told me a lot of good things about it so that helped me out there.”

One thing Wise kept in mind throughout this season was a small bit of advice that he received from Eichel.

“He actually told me this mid-year after I was mad after one of our games,” Wise said. “He said how tough the first year is and next year will be better. You just need to have fun and hang out with the boys.”

Those words really resonated with him during his first season with the NTDP. He had to remind himself several times to keep having fun.

“Even on road trips or not playing hockey, you have to have fun with the boys,” said Wise. “It’s unforgettable times on the ice. In the USHL, games can get annoying when you are losing but you have to keep that passion you had as a kid playing the game. I had to keep reminding myself about that at the end of the year.”

Wise, who finished tied for fourth on the Under-17s in scoring with eight goals and 25 points, says that his complete game and his defense has grown over the past year on the ice.

“I probably play more defense than I should which I guess is a good thing,” he stated. “Next year, hopefully, I will add a little more offense.

“We always do a passing drill before the pregame skates. It really helps you get the hands going. First, you are wondering what you are doing but now, you realize it’s a good drill for warm ups and helps get the goalies warmed up.”

Nothing means more to Wise than being able to wear the USA jersey.

“It’s really special. Most people don’t get an opportunity to represent their country so when you do, you have to cherish it,” he said. “When you are playing international tournaments, it’s special when you are going against Russia or Canada and getting into those rivalries.”

Wise came into the NTDP with international playing experience and wearing the USA jersey, as he was a member of Team USA that won a gold medal at the Youth Olympic Games in 2016. He is hoping this experience can help next year with the Under-18s.

“It was one of the coolest things I have ever done,” he said of the games. “The Olympic Village was sweet. I got to meet a ton of other athletes like snowboarders, Jake Vedder, who won gold [in snowboard cross] and we became pretty good friends.

“Winning gold there was a great memory — it was my first taste and it was really special. We have a lot of guys here [on the U17 team] that were on the team and it’s great. It will allow us to help show the other guys, who didn’t go to go, how special it is to win gold.”

Wise does have a favorite game memory with Team USA this season.

“I really liked Star Wars night [on Jan. 28],” he said. “It was annoying that we lost [4-3 to Tri City] but I did score my first USHL goal that night. We had a ton of fans there and we had cool jerseys.”

Wise and his U17 teammates are busy training to get ready for their final season with the red, white and blue. He knows exactly what they need to do.

“We have to keep working hard,” said Wise. “I was talking to Mason [Graddock] our assistant coach and he told me that he really loved our work ethic. We need to take every day pretty intense. If we keep doing that, I think we can be pretty good next year.”

Following his final season with the NTDP, Wise has committed to play college hockey at Boston University. It should be no surprise that it was an easy decision to return closer to home to play hockey.

“I love coach [David] Quinn,” explained Wise, who now lives in North Andover, Massachusetts, just a 30 minute drive from campus. “Their facility is really nice and they have a brand new rink. I love the school and the city life. It’s perfect. I love that place.” 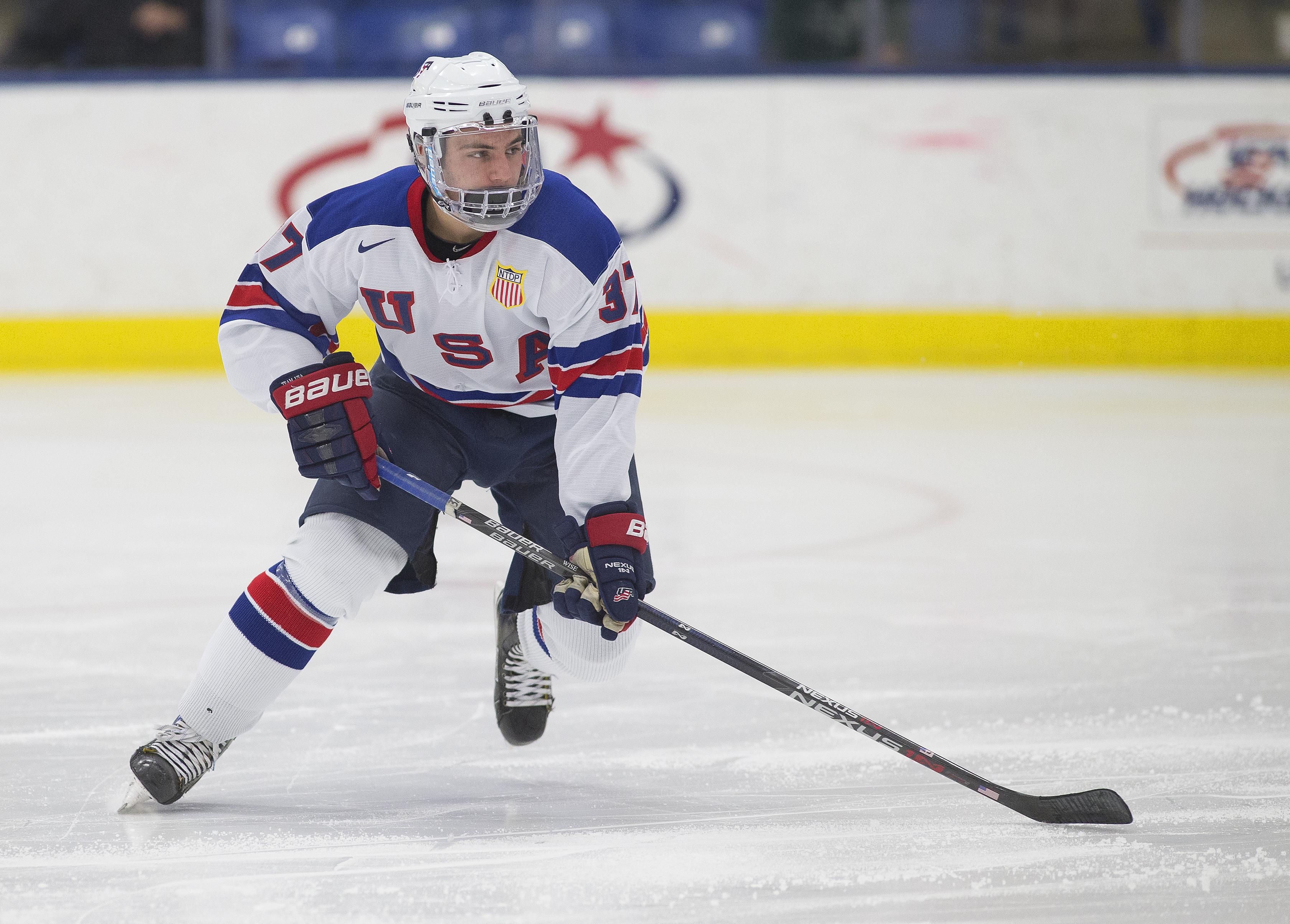