Under-18 title the premier highlight of forward’s NTDP experience 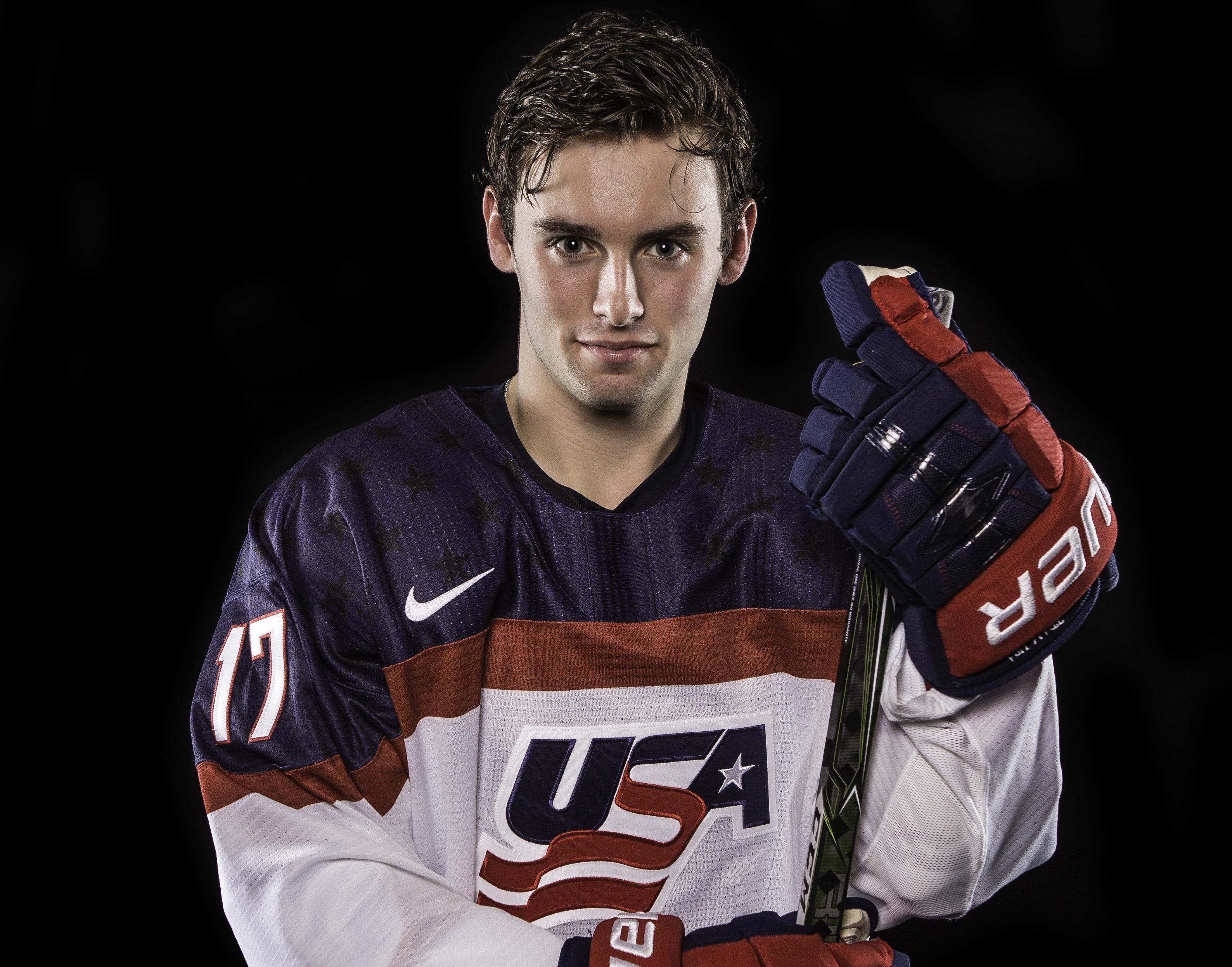 Time seemed to stand still. At least, that was how it felt for Evan Barratt each time he came back to the bench during the third period of the gold medal game against Finland in the IIHF U18 World Championship.

“We jumped out to an early 3-0 lead and during the third period, we were playing 25 second shifts and wanting to roll over four lines,” explained Barratt. “I remember coming back to the bench after a shift and looked up at the clock and there was still 15 minutes left. It just didn’t seem to be moving at all.”

As Barratt took his final shift and heard the final buzzer, there may have been a sense of relief added to the celebration that ensued with his teammates after the 4-2 victory on April 23.

“There was just under two minutes left when I was getting ready to go out on the ice for my last shift,” said Barratt. “We were up 4-1 at the time. We were so close and when we got back to the bench, there was about 30 seconds left. It seemed to take forever. I was sitting next to Logan Cockerill and we just started celebrating when that horn sounded.

“It was the right group of guys and to win the gold medal with them was unbelievable. It was a special moment.”

Some of his favorite and best hockey memories yet came from inside the locker room after the game.

“We were speechless in the locker room,” explained Barratt. “Some of the boys were crying and others couldn’t get the words out. After last year’s struggle, if you would have asked me last year if we can win the U18 World, I would have laughed at you.”

In capturing the gold medal at the U18 World Championships, Barratt and his USA Hockey National Team Development Program Under-18 teammates finished with a 4-2 win against Switzerland in the quarterfinals, a 4-3 win against Sweden in the semifinals and the win over Finland in the gold medal game. In addition, Team USA posted wins over Belarus, Russia, the Czech Republic and Sweden during pool play. It was an experience of a lifetime for Barratt and the U18s.

“There is nothing to compare,” said Barratt on the run leading up to the worlds. “We knew our team going in and we definitely felt that we were ready for the tournament. We had played every team and we knew how we matched up. I think we were pretty confident.

“Every game we played, the crowd seemed to be against us. We had to fight and play our best and ignore the reaction. There were 5,000 people at the Russia game [a 5-4 win on April 15] and it was a once in a lifetime experience.”

The Bristol, Pennsylvania, native can look back at his Under-17 year as the jumping off point. He cites how much he learned about himself and his team as things that came in handy during this final run.

“Every time you work out or practice, you need to do it at 100%,” he said. “I didn’t want to go down as not winning a medal but rather, I wanted to work hard every day. We put in the time last spring, especially after our U17 year did not go so well.

“This year, we lost just one international game all year. I learned that when you have the right group of guys who are on the same page, anything is possible.”

Barratt, who finished third on the team in scoring with 18 goals and 55 points, credits the training and the coaching staff in developing and growing his game.

“My overall skating and power in my game,” he cited as key improvements. “The weight room has really helped the physical part of my game with the training and the Kirk [Culik, off-ice conditioning coach] sessions. I have improved and I’m definitely stronger.

“Coach Granato [who coached the U17 year] was a great coach and we believed in him,” he stated. “Coach Wrobo [John Wroblewski] was what we needed this year. He pushed us, harder than we have been pushed. He was perfect for our group.”

For Barratt, it was tough to think about taking the USA jersey off with his teammates after the Finland game. The special feeling that comes from playing for his country and his teammates is something he hated to see come to an end.

“I really don’t want to think about it,” he said. “These guys are going to be my best friends for life. I do not want it to be over. I’m just looking forward to spending from 7:30 a.m. until 7:30 p.m. with them for the next few weeks.

“It was very special to put on the USA jersey. It was even more special to take it off when we came out on top. It was something we had worked for and to wear a powerful logo which represented something bigger than ourselves.”

He will head to Penn State next year to continue his hockey career, and along the way he will run into some familiar faces. But this time, they will be on the opposite bench.

“It was an easy decision,” Barratt said about choosing Penn State. “It is about a 3-hour drive from home. The coaching staff is phenomenal. They are great people. When I went on my visit, I felt right at home. The facility and academics are good.

“I looked at our schedule next year, and I think in every game, except for one, I will be playing against a former teammate. It will probably be funny at the start but I know it will never be the same as it was the last two years. It will definitely be interesting.”

For Barratt, he is happy to offer advice for next year’s U17 group. It has helped him appreciate even more what he accomplished.

“It will be very hard to stick with it but it is worth it at the end,” he remarked. “You are playing against 20-21-22-year-olds and that can be frustrating as a 17 year old but it makes you better.”

And Barratt will forever have a gold medal as a reminder of what can be achieved. 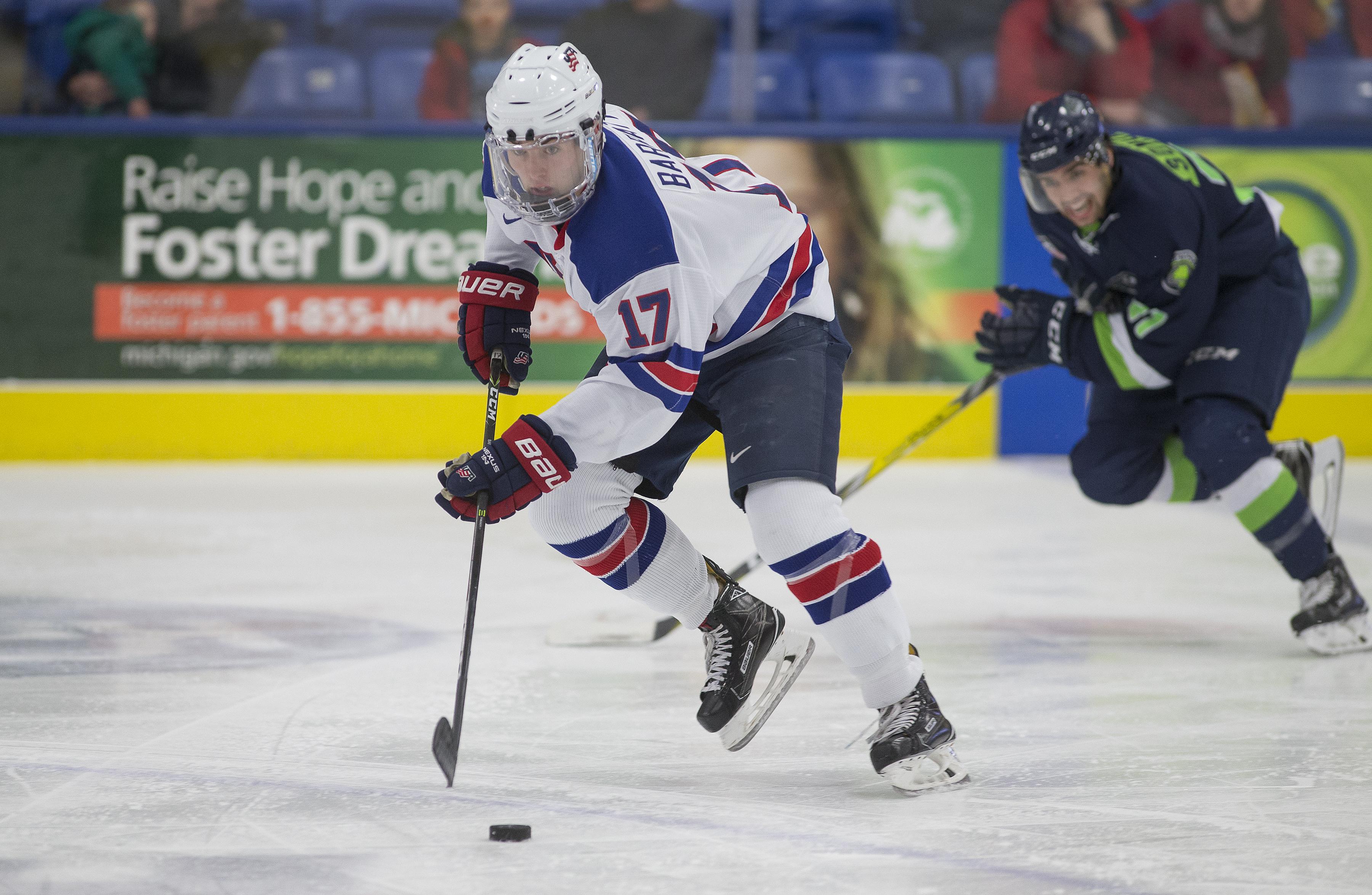 Favorite Activity Away From The Rink
Fishing