Forward doesn’t mind getting serious, but always has fun 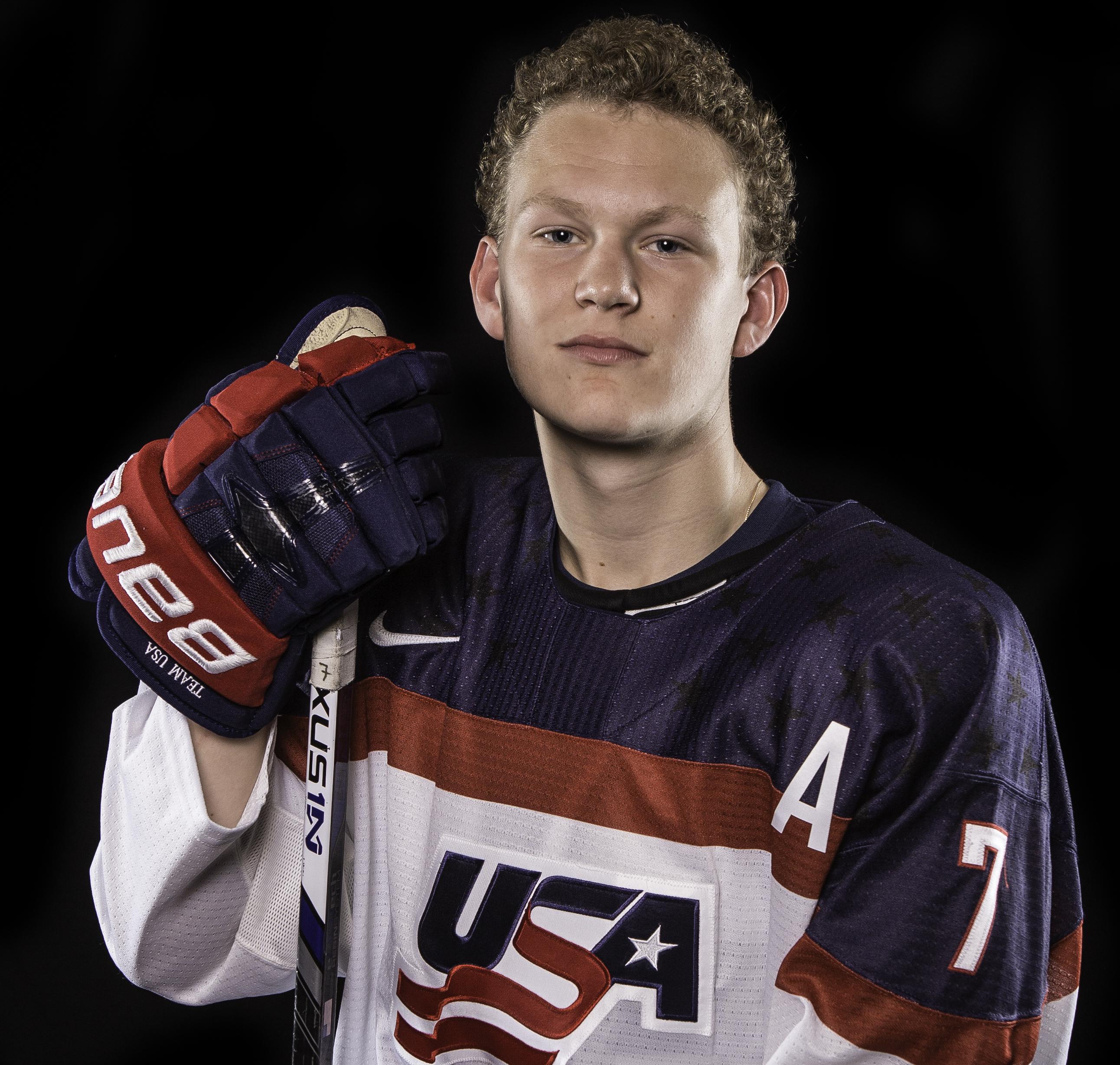 Whenever the U.S. National Under-18s need a light-hearted moment, an extra laugh, or some extra energy on the ice, there is one person they turn to: Brady Tkachuk.

He has been the voted the “most entertaining player” on the team.

“On the ice, I am always involved — sometimes it’s an altercation or it may be a funny celebration,” Tkachuk said about his unofficial title. “Off the ice, I’m the funny guy, the jokester, and I try to make everyone happy. I try to keep it light. That’s my job.

“My teammates think it’s hilarious that I’m doing it. I still try to keep involved and hope they get some energy off that.”

For the 6-foot-2, 195-pound forward, it’s not just about the laughs on the ice. Rather, he credits the training from this past spring that has really helped the team progress on the ice this season as U18s.

“Last spring and this past summer, we really put in a lot of work out there,” said Tkachuk. “For me personally, it’s the confidence that I have gotten stronger and I can make an impact on the ice. It all goes back to the confidence.

“It was tough, the spring training, but we all went through it together. We really created a bond between ourselves and we knew we wanted to get better. It was a little shaky the start of the year but as the season progressed, as a team, we have gotten better.”

He also credits the advice he’s received from first-year head coach John Wroblewski that has helped with both his and the team’s success.

“It’s to the point,” Tkachuk said about how his coach delivers advice. “It’s hard and he wants us to execute. It’s a pro atmosphere. He doesn’t accept a lot of mistakes and he pushes us to be the best we can. That has helped our team all year.

“He told us to act like a pro every day. Do things as much as you can to get the advantage over the other team. Eat healthy. Drink lots of water. Do everything you can.”

There’s no doubt that Tkachuk’s teammates consider him a leader, an honor that was made official this season as he has become a captain.

“It’s a huge honor to wear the C,” he said. “I’m happy that the guys look to me as a leader. It’s a privilege to have. It’s real special to me since my dad wore the C too. It’s very special.”

“Before the game, I try to keep things light,” he explained. “When we are out there on the ice, I like to always have a few chirps to get the boys laughing. When it comes time to be serious, I like to be serious and real direct. If we need to make a play or play better, I’ll say it on the bench.”

That leadership will be important as Tkachuk and his U18 teammates are starting their journey in search of a gold medal at the 2017 IIHF Under-18 World Championships. The squad won their first two international tournaments this year — the Five Nations in Plymouth in November and the Five Nations in Sweden in February — and they are hoping to use that success as a springboard.

“We have the confidence and we believe in each other and out goal, the gold medal at the U18 Worlds,” he stated. “The biggest thing for us is our depth — our four lines, our eight D and two goalies. We can all play the right way. We need to play hard and play for each other.”

Being able to wear the colors of his country each and every day, not just in international tournaments, is one thing that never gets old for Tkachuk.

“I always wanted to play for Team USA growing up,” he said. “I just thought it was the coolest thing. If I ever got the opportunity, I knew I had to come here.

“It’s a huge honor every day to wear the jersey. We are representing something bigger than ourselves.”

The nice thing for Tkachuk is that he has two family members — dad Keith, a 19-year NHL vet, and brother Matthew, winger with the Calgary Flames — that he can lean on for advice when it comes to hockey. And he hasn’t had to look far, as he has lived with his dad the last two years while playing for the NTDP.

“They have had a huge influence,” explained the St. Louis native. “My brother and I would play mini-sticks, roller hockey, video game hockey — you just name it, it was all about hockey. We did it together. He was always better than me growing up but I always tried to battle him. I thought I improved him and I think he improved me. He showed me what to do as he grew up. He and my dad were my biggest role models.

Next year, Tkachuk plans to attend his dad’s alma mater — Boston University — to continue the family tradition and his hockey career.

“Since my dad went there, I always loved BU,” said Tkachuk, whose cousins Casey and Ryan Fitzgerald also play for BU. “It will be really special to go there next year. I think David Quinn is doing a great job. I went up there and I know a few of the players. They have a great team, great facilities and a great school.”

Tkachuk also had the opportunity to play against his future college team, when the U18s dropped an 8-2 decision at BU on Oct. 22. It was a memorable experience for him.

“I have family from Boston so they were able to come and watch me,” he said. “When they named the starting line up and I was able to skate out, it was the coolest moment. The first few shifts, I realized that this is going to be me next year. As the game went on, I got more comfortable even if we didn’t win that game. It was a fun game.”

And that is all it takes for Tkachuk. 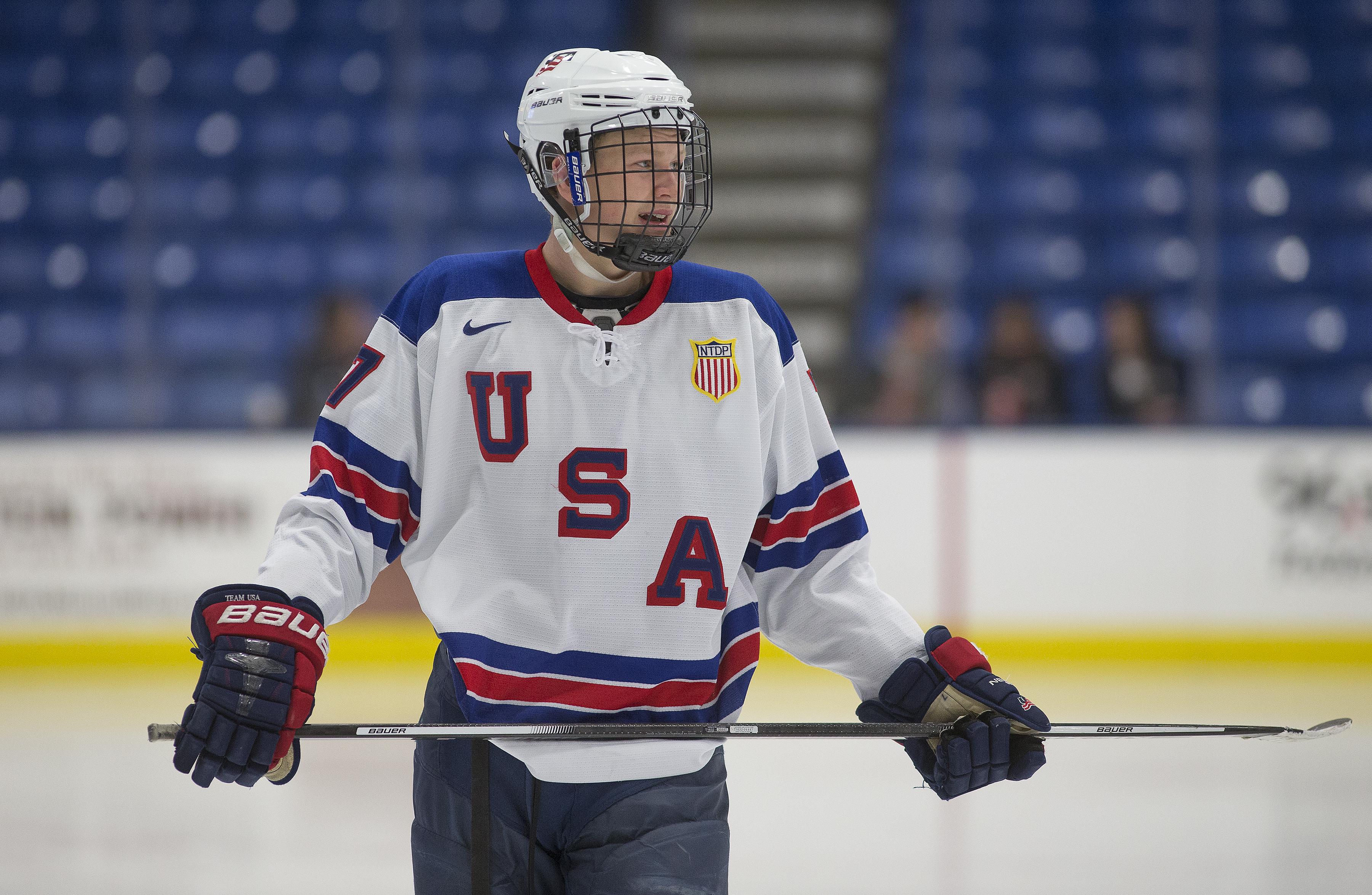 Goal Celebration
Slide on one knee

Sport (Outside of hockey)
Lacrosse