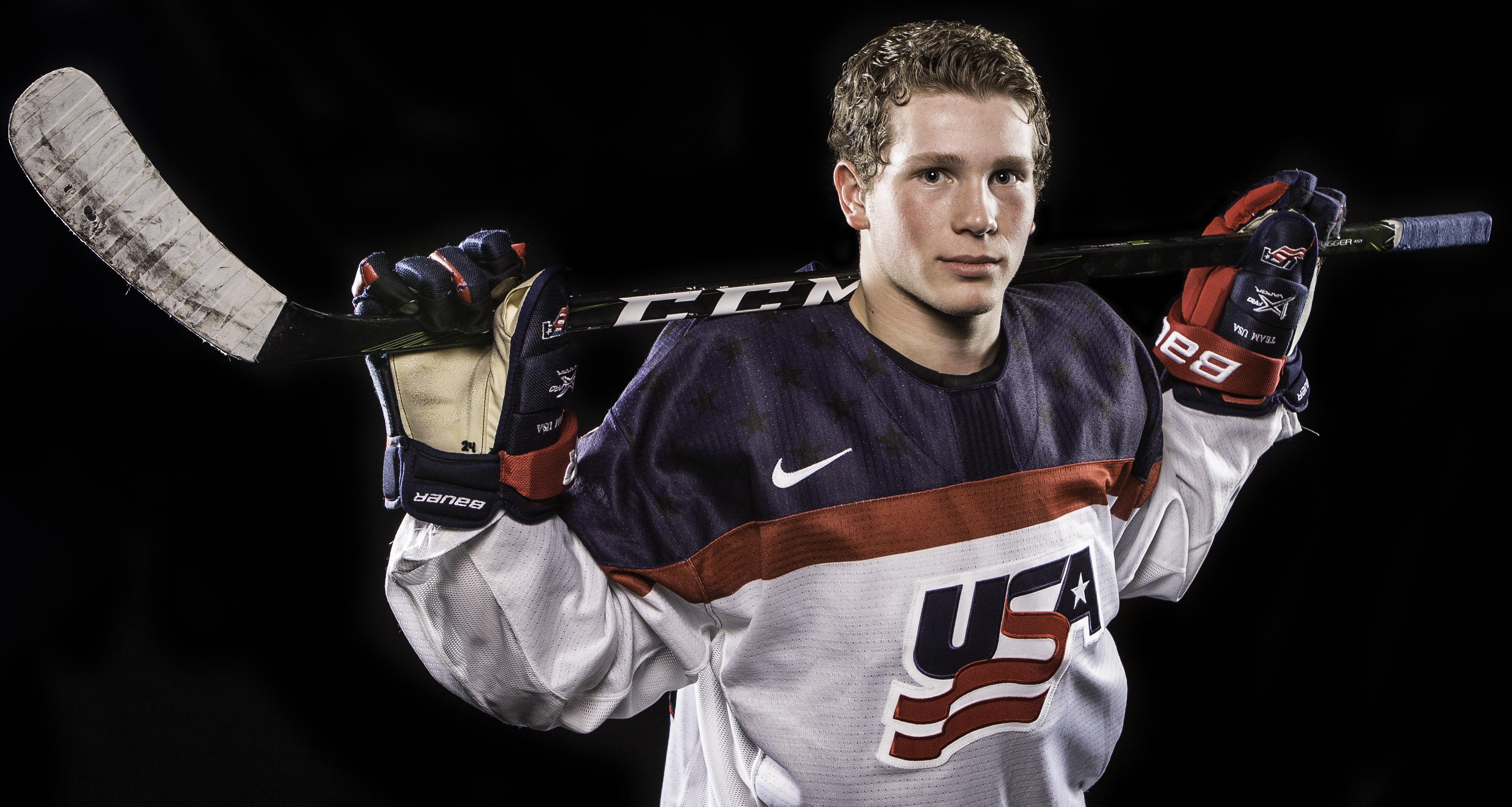 It will be a special and unique moment for Sean Dhooghe next year when he gets to suit up with his older brother Jason at the University of Wisconsin. The duo will head into Madison together as freshmen, even though Jason is two years older.

“It’s very special,” said Dhooghe, an Aurora, Illinois, native about the dream that became a reality. “Not many guys get to play hockey with their brother throughout their youth career or even college hockey, and now that we get to go in together for college hockey makes it that much more special. I’m not just catching him at the end, or he catching me at the end.

“Being with him is going to make it a lot easier. We have both been away from home and each other for a long time and I think we are both excited to be together.”

No one is more pumped than the Dhooghe parents — Daniel and Linda, who have split their time between Plymouth, Michigan, (while Sean has been with the U.S. National Team Development Program) and Green Bay, Wisconsin, (as Jason has played with the Green Bay Gamblers) to see their sons the last few years.

“They are definitely excited,” explained Sean. “They didn’t get too involved when we were making our decision — they wanted to keep it up to each of us. I know they were hoping that we would choose to go with each other.

“It will make it easier for them since they do not have to go to two different places. They will not have to split up and being so close to home will definitely help them out. I know my mom is very excited about it.”

Dhooghe already had the opportunity to play against his future college team when he and his Under-18 teammates dropped a 4-3 decision in Madison against the Badgers on Oct. 21. It was an eye-opening experience as he got a small taste of what is to come starting next year.

“It was exciting to walk into the building, not as a fan this time but as a player on the other team,” recalled Dhooghe. “The building was electric. It brought me to the future even though I tried to stay levelheaded. I tried to focus on the game we had but it definitely got me pumped up for the future.”

Dhooghe, a 5-foot-3, 138-pound forward, has watched his game grow tremendously since his first season with the NTDP Under-17 team. There are a few lessons he has since learned that have translated into his success on the ice this season as a member of the U18s.

“I have gotten tougher,” he explained. “I have learned to play more of the greasy areas, whether it’s in the corners or in front of the net. Even though I am smaller, I am learning how to battle through and find a way in the tough spots and make something happen.”

He credits the daily practices for part of this success.

“Practicing against the top kids in my age group and in the weight room definitely helps,” said Dhooghe, who has 14 goals and 25 points. “Day in and day out, you are going against the best kids and you have to find new ways to score goals.

“If you go to the net, it usually happens and I’m going to the net a lot more this year. I’m moving my feet more into the zone and that is one of the first places I’m looking to go. Once I leave the net, it’s somewhere I’m looking to get back to. It is something that Coach Wroblewski has taught me through the year.”

There are several other lessons that Dhooghe has taken away from Coach Wrobo that have helped his overall game.

“He has taught me how to be more patient with the puck in the offensive zone, rolling up the wall and letting the D go in and then how to make the right play,” said Dhooghe. “In addition, it is knowing the difference on when you have a line rush and when you don’t have a line rush. You need to know when to get the puck in and work it around on the forecheck.”

Nothing stands out more for Dhooghe to date than winning his first two international tournaments — The Five Nations in Plymouth in November and the Five Nations in Sweden in February — this season. But he knows there is still one big one left.

“It was definitely exciting this year, winning both those tournaments,” he stated. “It definitely gave us a good confidence boost coming back home for our last few games before the U18 Worlds. It was nice to see the team play well.”

Dhooghe recalled two particularly memorable games from the Five Nations where he really started to believe what he and his U18 teammates are capable of doing.

“The first game against Finland — the way we just played [in an 8-1 win],” he said. “Every line was rolling and every line was playing the style of play we want to play as it showed on the scoreboard.

“The last game against Sweden — by far the toughest game as they took it to a shootout [5-4 win] and we had to battle adversity and it wasn’t just given to us. That is when I really saw that this team can pull together and make a difference.”

One thing that Dhooghe has noticed this year is just how tightknit the group has become in a short time.

“Being away from each other so long in the summer [was a big reason],” he explained. “We had our ups and downs last year but at the end of the day, we are all family. Since we weren’t with each other for that long, I think it helped us realize how much we do need each other and how much we rely on each other every day.”

The reliance is why he understands exactly what they need to do over the next few weeks to get ready for the U18 World Championship.

“Right now, our best bet is to show up every day at practice and to keep getting better,” he stated. “We need to perfect our game the way Coach Wrobo is teaching us and that is what we need to do.” 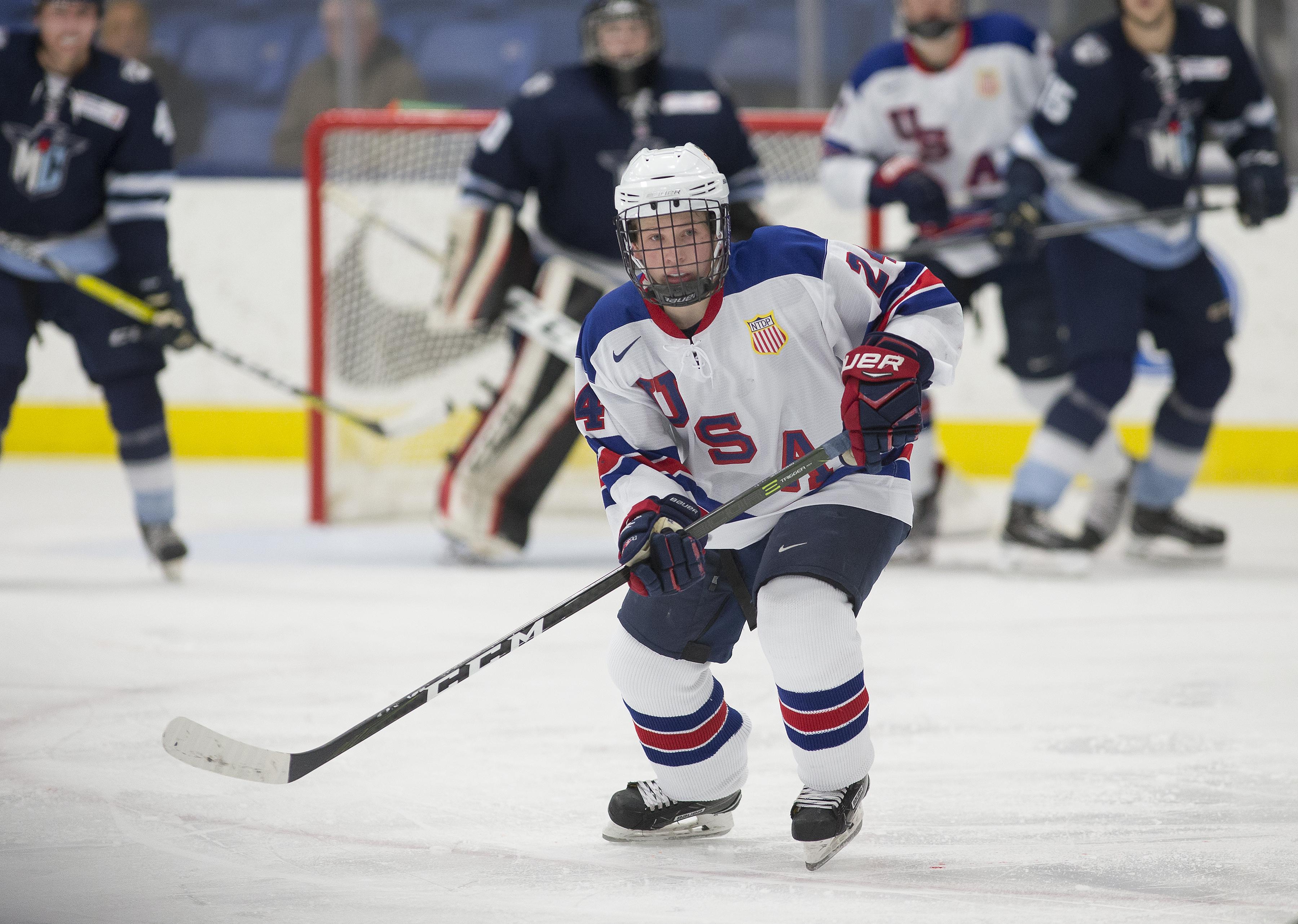