NTDP on Road for USHL Matchups 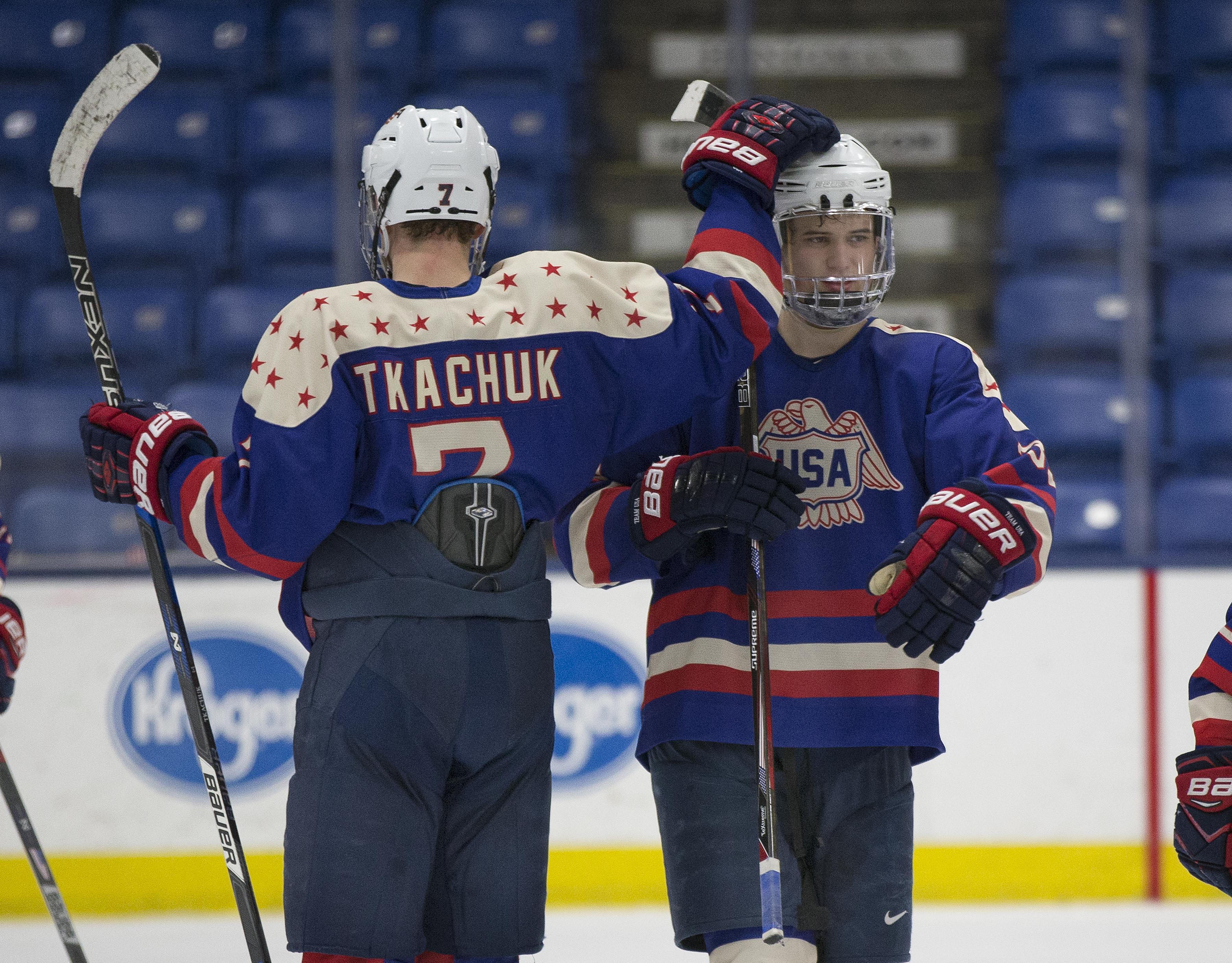 The NTDP is coming off a victorious weekend at USA Hockey Arena as they swept the Waterloo Black Hawks on Friday (4-3) and Saturday (8-3).

The U17s will play three different teams this weekend, starting with an 8:05 p.m. ET puck drop Friday (March 10) against the Chicago Steel at Fox Valley Ice Arena. Saturday (March 11), the team travels to Mystique Ice Center for an 8:05 p.m. ET matchup against the Dubuque Fighting Saints before finishing the weekend in Indiana for a 5 p.m. ET game against the Bloomington Thunder at the U.S. Cellular Coliseum.

The Under-17 Team traveled to Green Bay last weekend for a pair of USHL matchups with the Gamblers where they dropped both games.

SHOOTING FOR THE STARS: The NTDP will face Lincoln for the first time this season. The last time the U18s traveled to the Ice Box was on March 20-21, 2015. The Stars have come to USA Hockey Arena for two weekend matchups since then.

Lincoln sits fifth in the USHL’s Western Conference with 57 points, splitting the results of its last 10 games. Lincoln’s overall record is 26-18-4-1 (W-L-OTL-SOL).

Goaltender Josef Korenar boasts a 2.42 goals-against average between the pipes for Lincoln in 22 games. However, rookie goalie Cayden Primeau has seen more playing time and has recorded a 2.99 goals-against-average in 28 games played.

BENDING STEEL: The NTDP has faced Chicago five times this season. This is the second time this season the U17s will travel to Fox Valley Ice Arena. The U17s lost both home games (8-3, 6-2) and one away game to the Steel (4-1), while the U18s dropped their match at home (4-1) before taking one on the road (5-2).

The Steel sits first in the USHL’s Eastern Conference with 72 points and an overall record of 31-12-2-3.

Forward Jack Bandini is fourth in the league in goals with 25 and is third on the team in points. The team point leaders are Reggie Lutz (39) and Jake Jaremko (36). Defensemen Adam Karashik leads the team with a +15. All four players have competed in 48 games.

Goaltenders Alex Stezka and Dayton Rasmussen have split time between the pipes. Stezka owns a 2.30 GAA in 30 games, while Rasmussen boasts a 2.47 GAA in 32 games played. Stetzka’s .915 save-percentage puts him ninth in the league.

GRAPPLING THE FIGHTING SAINTS: The U18s have faced Dubuque once this season, claiming a Fall Classic East matchup in September, 8-2. This is the first matchup against the Fighting Saints for U17s this season. They last played at the Mystique Ice Center in January 2016.

Dubuque also has 72 points but sits second in the in Eastern Conference standing, having one win less than Chicago with a 30-12-5-2 record. Dubuque has not lost a game in its past five matchups.

Dubuque has three players sitting in the league’s top 20 in points. Center Zach Solow leads the USHL in points with 55 and assists with 42, averaging 1.22 points per game. His teammate Colin Thiesen shares the league’s top scorer title with 28 goals in 46 games.

The Fighting Saints’ goaltender, Jaxon Castor, is fourth in the league in goals against average with 2.18 and has a save percentage of 0.907, putting him at 17th in the league.

CRACKING THE THUNDER: The U17s have faced Bloomington three times this season. They split the games played at the U.S. Cellular Coliseum, losing 6-2 before taking one 3-1. They dropped the home matchup 3-2.

Bloomington sits sixth in the Eastern Conference with 45 points, boasting a 20-23-3-2 record. The Thunder are riding a two-game winning streak.

Vladislav Dzhioshvili leads the Thunder with 38 points and 18 goals in 46 games played, putting him at 19th in the league. Bloomington has two players in the USHL’s top 20 in assists.  Christiano Versich (25) sits in 15th and Wyatt Kalynuk (24) owns the 18th spot.

Gabriel Mollot-Hill boasts a .903 save-percentage between the pipes and a 2.77 goals-against-average in 30 games played.

BJORK A HOCKEY HUMANITARIAN FINALIST: University of Notre Dame forward Anders Bjork (2012-14) leads the Fighting Irish in points, but off the ice was named one of six finalists for the Hockey Humanitarian Award for his work with elementary school children at the Perley Fine Arts Academy in South Bend. He is one of two juniors nominated amongst four seniors.

FREDERIC NAMED HCA ROOKIE OF MONTH: Freshman forward Trent Frederic (2014-16) is the Hockey Commissioners’ Association’s National Rookie of the Month for his performance in February. The University of Wisconsin forward had eight goals and 14 points in the month of February.

KELLEHER FINISHES STRONG: Senior forward Tyler Kelleher (2011-13) leads the NCAA Division I standings in assists with 39 in 37 games played this season. The University of New Hampshire standout also co-leads the standings in points with 62 and his 13 power play goals put him tied for third in DI.

RUSSO MAKES NHL DEBUT FOR WINGS: The Detroit Red Wings recalled Robbie Russo (2009-11) this weekend from the Grand Rapids Griffins, and he made his NHL debut on Tuesday (Mar. 7) against the Toronto Maple Leafs. The defenseman had 15:44 time on ice in his first game.