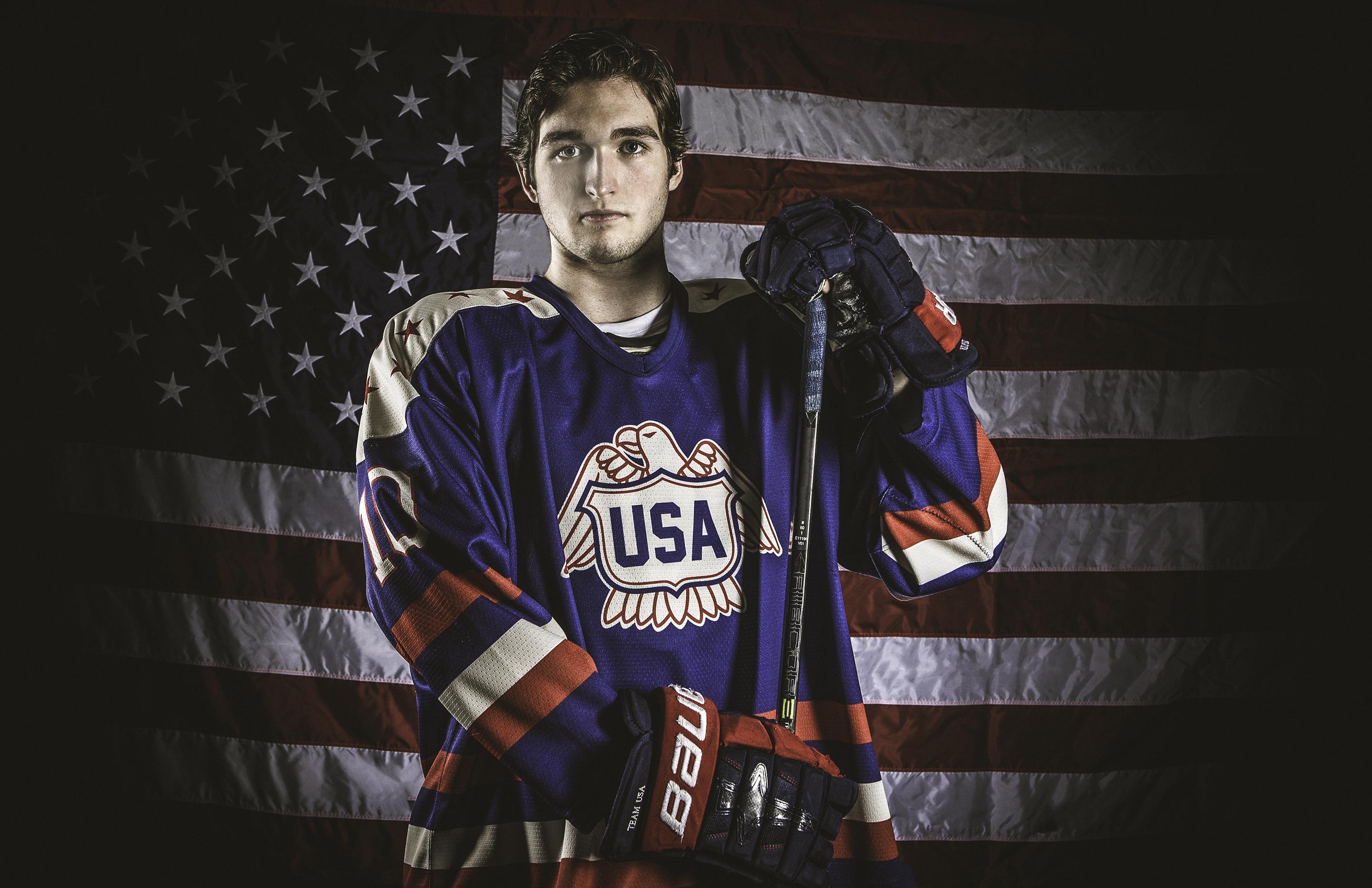 For Scott Reedy, he takes great pride in wearing the colors of his country each day and it’s something he knows he can’t take for granted.

“It’s an honor everyday,” he said. “It’s something that you look at before you put it on. You know you are playing for a bigger cause. Any day you get to represent your country is an unbelievable day.”

It’s a big part of why he took to heart the USA Hockey National Team Development Program training regimen last spring, after his first season with the Under-17 team. He credits that training as a major part of the success he is having as a member of the Under-18 team this season.

“The biggest difference was getting stronger [last spring],” remarked Reedy, a 6-foot-1, 202-pound forward. “A lot of it had to do with working out during our spring training schedule. We were working out five days a week, getting in the weight room every day and putting on 10 to 15 pounds of muscle. That really translates on the ice.”

He credits that added strength and weight in helping improve his game, especially in the corners.

“We are playing some big guys, especially when you are playing colleges and you need to have that strength in the lower body to fend guys off in the corner. To be able to hold onto the puck and separate them from the puck to get the puck back on your stick,” he stated.

Reedy and his U18 teammates are constantly working on drills to improve this aspect of their games.

Reedy, who tallied a hat trick in a 6-3 loss to Arizona State on Feb. 25, currently has 17 goals and 36 points in 45 games to rank sixth on the team in scoring. With eight games remaining in the regular season, including a pair of home games against the Waterloo Blackhawks this Friday and Saturday at USA Hockey Arena, Reedy understands what they need to do as they start to preparations for the final tournament — the IIHF Under-18 World Championship.

“We need to stick with it — practicing hard and practicing fast,” he explained. “We need to practice our team game and our team line rushes. We need to keep our wining mentality and keep hitting the weights so we can prepare for it mentally as well as physically.”

For Reedy, the mental preparation it takes to prepares for games is an important part of his routine.

“It all starts the night before, whether you watch video, or relax, or stretch out,” he said. “You have to get into the game mode and then, wake up. You need to get a good breakfast, hydrate and try and get a nap. Come to the rink with a good mindset, ready to play and ready to win. We get some video in and a warm up and we are ready to go.”

Growing up in Prior Lake, Minnesota, it was always a dream for Reedy to be able to play for his hometown Minnesota Golden Gophers. It was a team that he loved growing up.

“That was a big part of my childhood,” he stated. “I liked watching them. I watched Blake Wheeler and Phil Kessel play. It was definitely pretty cool.

“I was about six years old. I was able to get autographs from the players after the game, up on top. I went down the line and got everybody’s autograph. It was really cool for me.”

Next year, he will head to the University of Minnesota and hopefully, he will be able to make a kid’s day and sign an autograph for him or her. Plus, it’s close to his home so he can go home when he needs a home-cooked meal.

“Growing up in Minnesota, that is a huge factor for me,” he said. “I will get to have my family there. They will be able to come watch me. I’m really comfortable with the coaching staff and players there too. All that combined and it’s always been a dream of mine, growing up and watching them play and something I couldn’t turn down.”

He had an opportunity to play against his future college team on Oct. 14, a 9-0 loss, but for Reedy it was an experience of a lifetime.

“It was a great opportunity to play in front of the home crowd and see what it will be like next year and playing against some of my future teammates,” he remarked. “Having my family there to support me was pretty cool. My parents, my sister and 15 to 20 friends and other people that I knew. My brother, who is in college couldn’t come, but he watched it on video.

“Taking the ice for warm ups and seeing the people in the crowd and taking in the atmosphere, that was definitely a good moment.

He realizes that playing the college games this season will only help him next year when he makes the next step.

“Having college games gives us a little more experience and that one-step advantage that others guys haven’t had by playing college games,” he commented. “It’s nice to get some of those games under our belt this year so it won’t be too much of a change next year.”

For now, he is focused on his final few months with the NTDP. He will leave with some valuable lessons that he has learned that he will carry with him forever.

“The one thing I have learned is that everybody is going to go through some adversity here and this is a special place that teaches you the good and the bad,” he recalled. “There are people here that help you rebound from the bad stuff. You have to keep working on and off the ice to improve yourself. This place has definitely taught me how to become a better person so it’s not just all on the ice. I definitely took things from a personal standpoint and learned how to be a better teammate for the guys around me.” 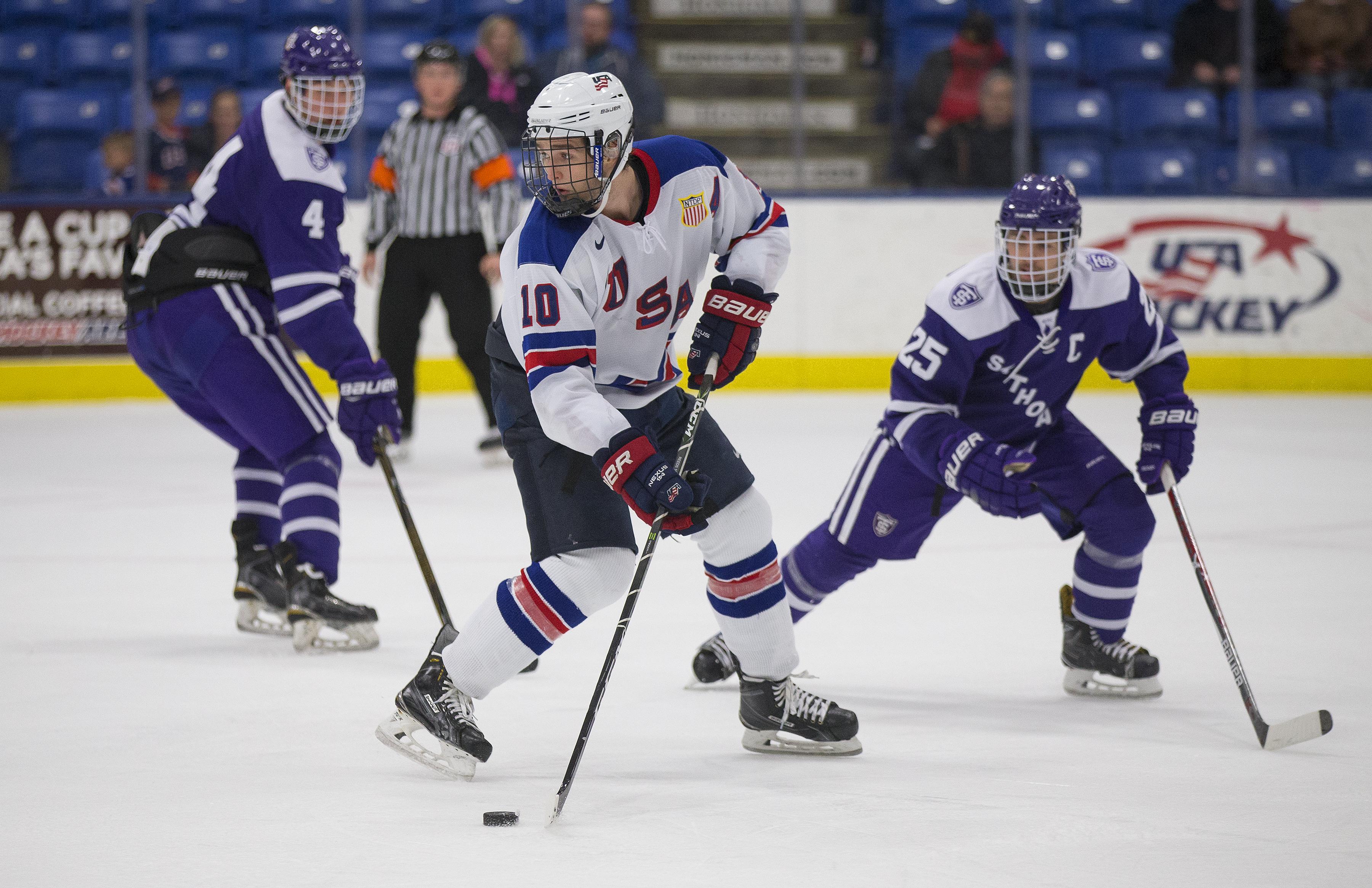 Sport (outside of hockey)
Golf

Pump-up Song
Till I Collapse by Eminem