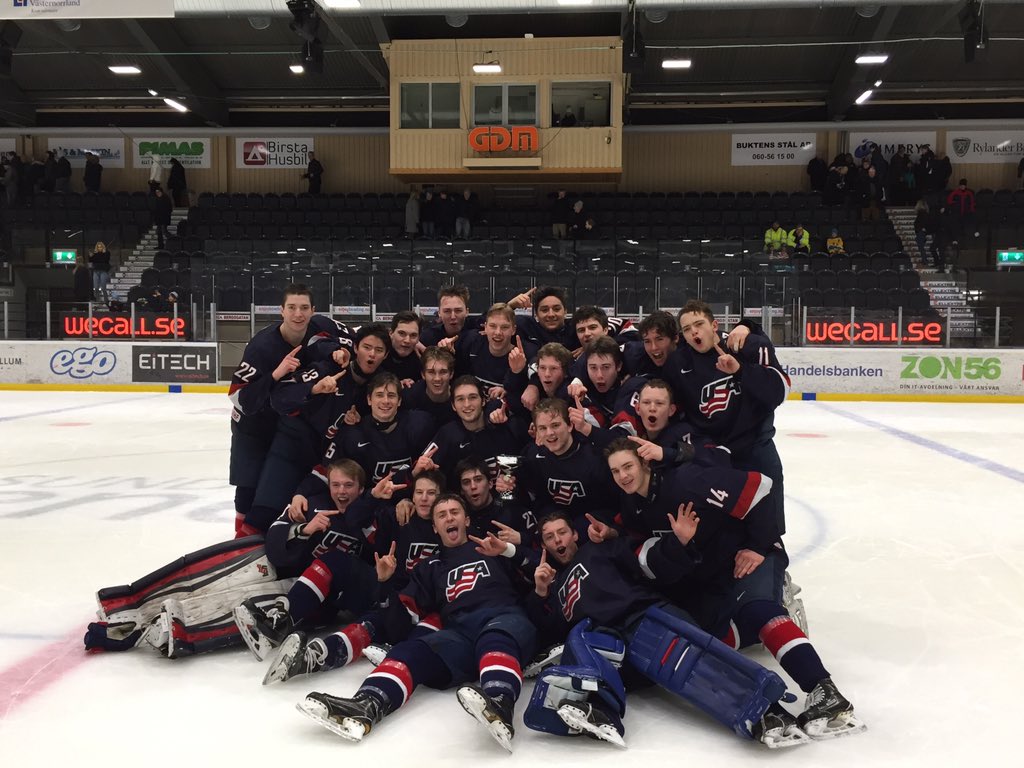 SUNDSVALL, Sweden - Josh Norris (Oxford, Mich.) scored a short-handed goal with three seconds remaining in regulation and then tallied two shootout goals in a 5-4 victory against Sweden to capture the 2017 Under-18 Five Nations Tournament Championship for the U.S. National Under-18 Team on Sunday afternoon at Sundsvall Energi Arena.

This marks the U.S. National Under-18 Team's second Five Nations Tournament victory during the 2016-17 season. The U18s finished with a record of 3-1-0-0 (W-OTW-L-OTL) to secure a tournament-clinching 11 points. Sweden finished second with a tournament total of nine points.

A Minnesota trio opened the scoring for the U18s. Following the successful kill of a Sweden power play, Nate Knoepke (Farmington, Minn.) pounced on a loose puck in the slot and wristed a shot to the top left corner of the net. Grant Mismash (Edina, Minn.) and Scott Reedy (Prior Lake, Minn.) earned assists on the play.

Team Sweden tied the game with 18 seconds remaining in the period to make the game 1-1 heading into the first intermission.

The U18s opened the second period by capitalizing on their first power play opportunity at the 5:42 mark of the period. Following an aggressive forecheck, Reedy sent a pass through the slot to Quinn Hughes (Orlando, Fla.) who buried a shot past Sweden goaltender Olle Eriksson Ek. Michael Pastujov (Bradenton, Fla.) also picked up an assist after applying the forecheck.

Sweden added one more tally midway through the first to bring the score to 3-2 heading into the final frame.

Team Sweden capitalized on two early two-man advantages in the third period to take the 4-3 lead. The U18s received another penalty at the 18:05 mark of the third period but were able to pull goaltender Dylan St. Cyr (Northville, Mich.) in favor of an extra attacker.

After a scramble in front of the net, Norris emerged and was able to push a puck past Eriksson Ek with just three seconds remaining in regulation to force overtime.

The U18s killed off a Sweden power play in overtime and neither team was able to tally a goal so the game moved to a shootout.

Mishmash and Norris scored in the first two rounds of the shootout for the U18s but Sweden answered with two goals of their own. St. Cyr and Eriksson Ek shut down shooters in the next three rounds before Norris broke through with his second opportunity in the sixth round. St. Cyr ended the game with a save on Fabian Zetterlund.

St. Cyr finished the game with 25 saves and is now 4-1-1-0 (W-OTW-L-OTL) in international competition this season.

The U18s have 12 days off before resuming their collegiate schedule with a pair of matchups against Arizona State University at USA Hockey Arena on Feb. 24 (Fri.) and Feb. 25 (Sat.) in Plymouth, Michigan.