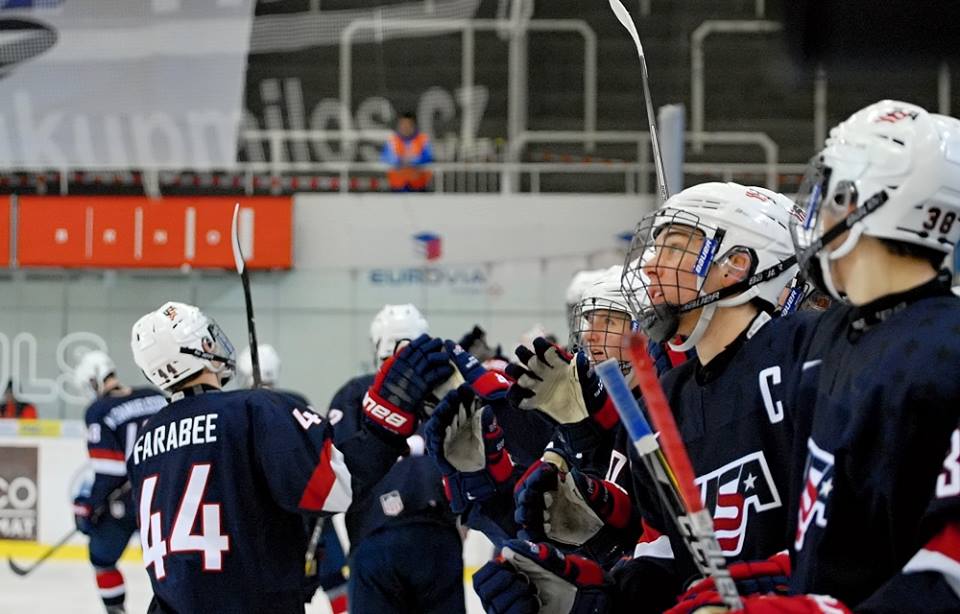 BRNO, Czech Republic — The U.S. National Under-17 Team erased a two-goal deficit in the second period and added two more goals in the third to top the Czech Republic, 4-2, in its final game of the 2017 Under-17 Five Nations Tournament at DRFG Arena. Bode Wilde (Birmingham, Mich.) scored twice and Tyler Weiss (Raleigh, N.C.) recorded a pair of assists in the win.

Team USA is 2-1-0-1 (W-OTW-OTL-L) at this year’s event. The final standings, which are based on points, will be determined following the results of tomorrow’s games (Finland vs. Sweden at 6 a.m. ET; Czech Republic vs. Russia at 9:30 a.m. ET).

At 7:39 of the first period, Erik Middendorf (Scottsdale, Ariz.) was awarded a penalty shot after he was slashed on a two-on-one shorthanded attempt with K’Andre Miller (Hopkins, Minn.), but his shot was saved.

The Czechs opened the scoring with 3:23 on the clock in the first with a wrist shot by Otakar Sik from the right circle. Matej Pekar made it 2-0 when he scored from a tight angle along Team USA’s goal line 1:57 into the second frame.

The U.S. had back-to-back power plays just past the midway point of the period. Thirty-four seconds into the second man-advantage, Jake Wise (North Andover, Mass.) sent a cross-ice pass to Wilde, who one-timed it from deep in the left circle for the score.

With 1:11 on the clock in the second, Spencer Stastney (Mequon, Wis.) sent on a rocket from the point off a set up by Weiss during a Team USA power play. The shot deflected off Jack DeBoer (Madison, N.J.) in front of the net to make it 2-2 and erase the Czech Republic’s lead.

At 3:39 of the final stanza, a shot from Miller rebounded to Jake Pivonka (Woodridge, Ill.), who made it 3-2 and gave the U.S. its first lead of the game.

Wilde added his second of the game about five minutes later after finishing a feed from Weiss.

Czech Republic pulled goaltender Lukas Dostal for the extra skater in the final minutes of the game, but the U.S. held on for the 4-2 victory.

NOTES: Jake Pivonka was named the U.S. Player of the Game after scoring the game-winning goal … Ryan Ullan (Hibbing, Minn.) made 30 saves in net for Team USA ... The U.S. is competing in the 2017 Under-17 Five Nations Tournament with Czech Republic, Finland, Russia and Sweden ... Follow along on Twitter at @usahockeyntdp and using the hashtag #5NationsU17.