For Randy Hernandez, playing the game of hockey is all about dedication, drive and hard work. It’s just a small takeaway that he carries with him from his Cuban roots to help keep him grounded.

“No matter where you come from, you need to pick something you love and stick with it,” he remarked. “You have to keep striving for that one thing and you need to keep pushing yourself. If you really love it, you will make it far. You need to put your time in — it’s all about repetition.”

Hernandez, who grew up in Miami, Florida, had to make the transition to Michigan when he joined the U.S. National Team Development Program. Not only was it a culture shock, but the weather took some getting used to. Plus, he was missing his mom’s home cooking.

“The first three weeks, it was so cold,” he joked regarding last year’s winter. “I was always putting three or four layers of sweaters over me. It will make it easier this year since I know what to expect.

And, he had to overcome a language barrier. Last year was the first time in his life where he only spoke English.

“We usually only speak Spanish at our house. It was something to get used to. There were times where it seemed they were talking so fast and I needed them to slow things down. I got used to it. It is much easier this year.  When you are only speaking Spanish, it can be challenging,” he said.

That is why it should be no surprise that one of the biggest smiles on the ice after the Under-18 Team captured the 2016 Five Nations Cup Saturday night at USA Hockey Arena was coming from Hernandez. Team USA had posted a 3-2 win over Team Finland to capture their first international title.

Hernandez credits some takeaways from last year in getting that first big win.

“In the third period, we cannot stop,” he said. “Last year in the third period, there were times where we seemed to get tired. We gave up. This year, we are always getting pushed in practice and we work extra hard. I feel we have that resistance to play all 60 minutes. That is where we are going to beat those teams.”

One of the highlights for Hernandez was that his parents, Roberto and Marlen, and his brother Roberto were able to spend the week in Plymouth and watch him in action. It allowed him to reflect on everything they have done for him through the years. He started skating at 6 and hockey immediately followed.

“I appreciate everything they have done for me,” Hernandez said. “They were always there for me whether it was driving me to practice, or driving me to games. I am grateful for all my family. I couldn’t do it without them.”

On the ice is where Hernandez, a 6-foot, 177-pound forward, wants to make his name known. He already has seen a big difference from his U17 year to his U18 season, including gaining almost 15 pounds of muscle. One thing has been the difference maker and that is confidence.

“The biggest difference for me is that I’m showing more confidence on the ice,” he said. “Playing against older guys was tough in the beginning but now, my body has developed a little more and I’m used to it.”

Plus, adding the college games this season has helped him with his game.

“I feel like playing against older guys and always competing against the college teams has been helpful,” said Hernandez. “Now, when we go and play in the [United States Hockey League], it is easier and we feel more comfortable. It’s a whole different atmosphere.”

In 18 games this season, Hernandez already has tallied four goals and six points after posting 15 points with eight goals in 56 games last season. He credits his work in practice as a big reason for his success.

“Working on my shot is one thing I have been working on,” explained Hernandez. “It was probably my weakest point in my U17 year and it has definitely gotten better. The coaches at the end of practice will pass us one-timers which are very helpful. Then, I go downstairs and shoot pucks too.

“Once you score the first goal and get it going, I’m going to try and keep working hard.”

Once again, that is where Hernandez’s family roots keep him grounded. Over the summer, he was able to eat his mom’s home-cooked food and work out.

“I did this Florida Hockey Academy Camp where a lot of the NHL players came down to practice,” he stated. I got to compete against those guys and that made me want to push harder. That is where I trained most of my summer.

Former NHL player Olli Jokinen served as his coach and he also skated with former NTDP standout Jacob Trouba. Hernandez took a few valuable lessons away from this summer.

“Never give up,” he said on the advice. “They told me they saw a lot of talent but I need to keep moving forward and pushing myself. You will get to where you want to be. That is something I am going to remember.”

In Hernandez’s all-American story, that motivation to keep working comes from always remembering his family roots. 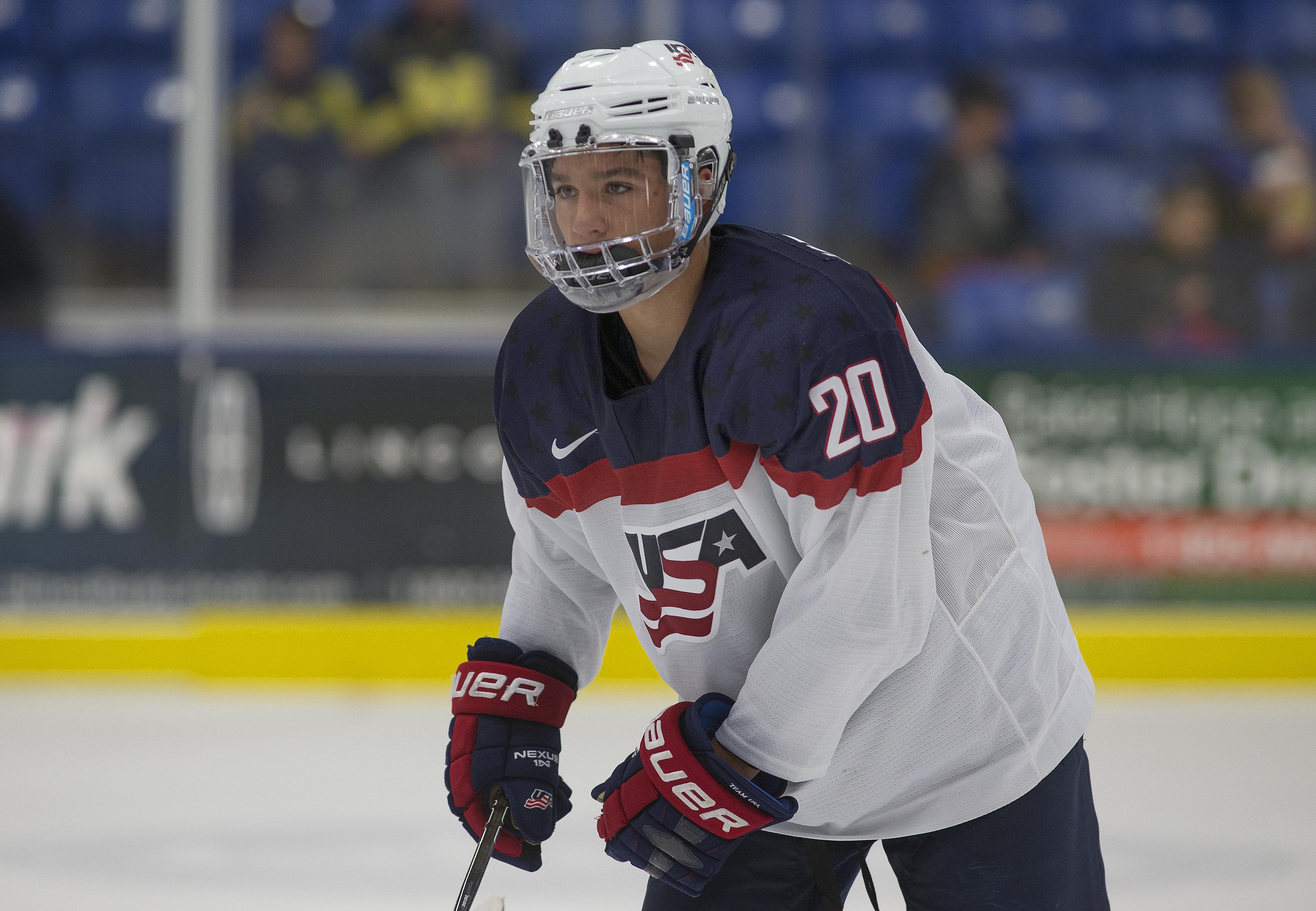 Sport (outside of hockey)
Basketball