Logan Cockerill Focused on NTDP, Looking Ahead to College

Forward hopes to make an international impact in U18 season 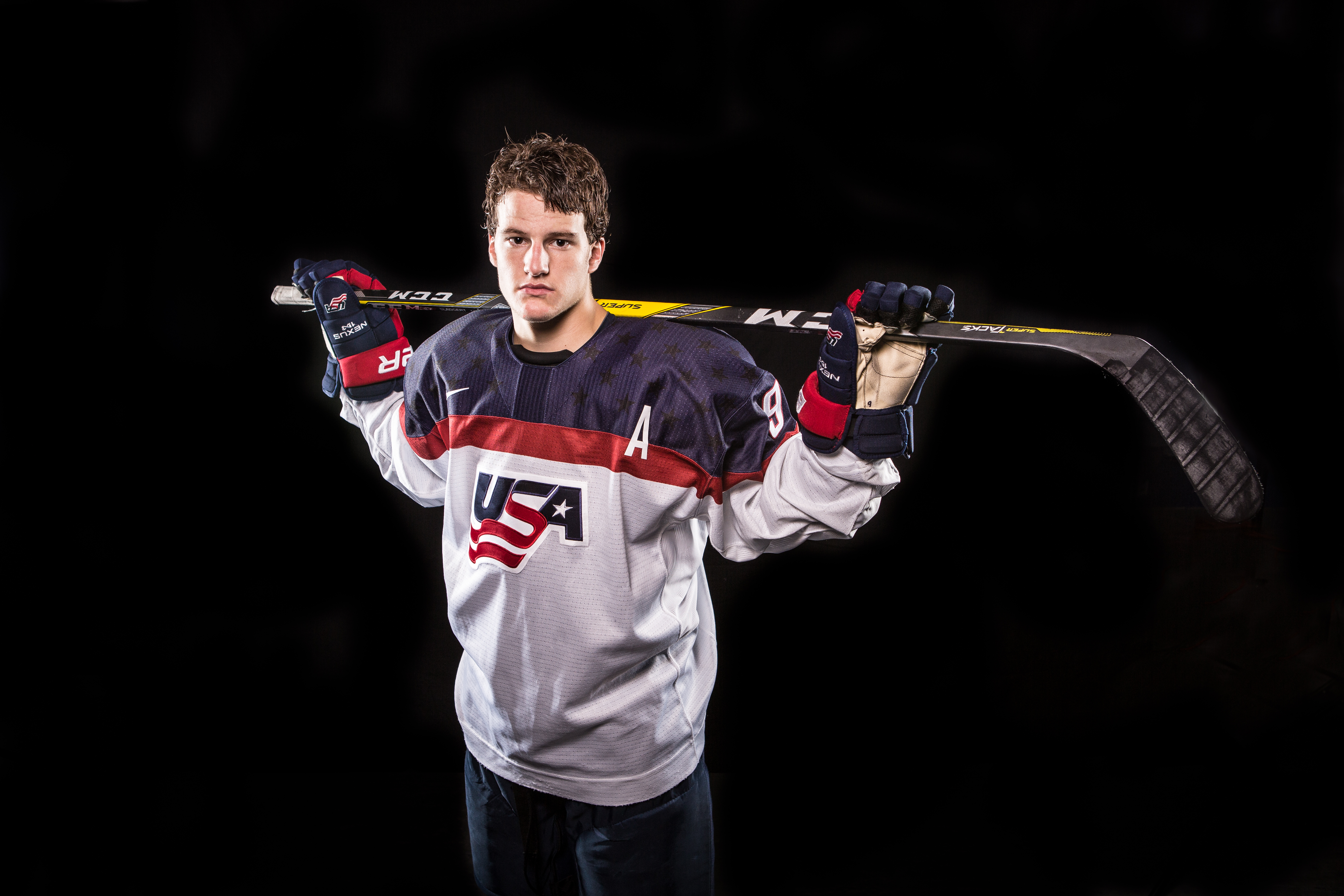 It took a team bonding activity for Logan Cockerill to discover that he still has a lot to learn about his future hockey home.

Cockerill and his U.S. National Team Development Program teammates were out in Boston as their U18 squad played a two-game set on Oct. 6 at Boston University and Oct. 8 at Harvard University.

“We did a scavenger hunt around the city,” he said. “It made me realize that I don’t know my way around at all. I will have to figure it out before next year.

“We were walking back and forth on the scavenger hunt. We went to one of the rivers and to the Paul Revere statue. We had to buy the coaches some cannoli, which I think was the main reason for the scavenger hunt. It was a good team bonding experience. We even had to figure out how to use the trains and mass transit.”

The highlight of the trip for Cockerill was playing against the Boston University Terriers, his future college squad. Despite the 8-2 defeat, it was a thrilling experience for him.

“That was really cool. One of the biggest things was seeing that jersey and the logo,” he remarked. “All the BU guys got a cheer from the fans when they announced our names and we got to start the game. It was fun to play against those guys. They didn’t let up at all — they gave it their best effort. I didn’t get much chirping but I do think that [former NTDP forward Jordan] Greenway said something to me.”

For now though, Cockerill is 100% focused on his season with the NTDP. The Brighton, Michigan native worked hard to prepare for his U18 season as he put on 10 pounds, which were mainly muscle.

“I was training over at MECA [Michigan Elite Conditioning for Athletes] — which is just over in Wixom,” said Cockerill. “I took some time away from the ice for about a month to get my mind to relax a little bit. I also went up north with my family. I got back on the ice about a month before the season started.”

The 5-foot-9, 164-pound forward has already noticed a huge difference between his U17 season and his U18 season on the ice.

“In our games, you can tell that the game has slowed down for us,” he said. “Last year, it seemed that the game was moving a little too fast for my mind. Now, I’m more comfortable on the ice and I think the whole team is more comfortable. Being stronger after spring training, we are able to keep up with everyone more.”

In addition, Cockerill and his teammates are still getting used to a new coach, John Wroblewski, in practice and behind the bench.

“Coach Wrobo is a very intense guy,” he said. “He expects you to always be giving your full effort … so did Coach Granato. They have different approaches [when it comes to practice]. Coach Wrobo tends to get on you a little more which is good for me. He makes you work harder.”

Cockerill’s hard work did not go unnoticed as he earned an invitation to the 2016 CCM/USA Hockey All-American Prospects game in Pittsburgh. He played on the team coached by Mark Howe and tallied one goal.

“It was very cool playing for Team Howe,” he recalled. “His father [Gordie] with all the history and he definitely knows a lot about hockey. It was cool to play against some of the guys on my team for the first time in over a year so we got to square off against them. It was fun.

“There was some chirping between the players. I might have gotten on [current U18 teammates Evan] Barratt and Nater [Nate Knoepke] a little bit. We didn’t have any bets but there may have been some trash talk on the bus. We fell short but it was a great game.”

Cockerill is preparing for the squad’s first international tournament, the Five Nations Tournament that runs from Nov. 1-5 at USA Hockey Arena in Plymouth, Michigan. The tournament features the Czech Republic, Finland, Switzerland and Sweden.

“The stakes are higher [in international games]. It doesn’t mean that I have to prepare differently. You definitely realize what you are playing for when you play against other countries. It really hits home,” he said.

One thing that will never change in international play is that the winning team will hear their national anthem after a victory. It’s one of the small differences from the regular season where the national anthem is played before the game.

“It’s very special. We are hoping to hear it after the games a few times at the Five Nations,” he said.

Cockerill knows that this team can take home some valuable lessons from international play last year.

“I think one thing we can apply is that you cannot take anyone lightly,” he said. “You have to be as prepared for a team that you think is better as you are for a team that is worse. I think definitely we learned that mistakes are a lot more heightened in these games. They matter a lot more. Everyone has to be dialed in and if they are not, it could change the whole outcome.”

Which leads to one of his favorite moments from last year’s Five Nations game against Russia at the USA Hockey Arena.

“When we played Russia in the finals of the Five Nations last year, with all those people here, it was cool to see a packed house,” recalled Cockerill. “I’m hoping that we get that for a few of the games this time. It is a lot of fun playing against other countries.”

Book: Lord of the Rings