GOING FOR THE GOPHERS: The U.S. National Under-18 Team's matchup with the University of Minnesota on Friday night will be the sixth all-time meeting. The U18s are 1-4-1 all-time against the Golden Gophers but their last matchup was the first-ever win for the NTDP. The first overall pick in the 2016 NHL Entry Draft, Auston Matthews, tallied his second goal of the game with 1:33 remaining in overtime to give the Under-18 Team the victory against the fourth ranked Gophers on Nov. 21, 2014. Joseph Masonius, Caleb Jones and Matthew Tkachuk also scored for the U18s. Luke Opilka made 25 saves to pick up the win for the U18s. The two teams first played on Jan. 17, 2003 when the Golden Gophers blanked the NTDP 6-0. Minnesota has outscored the U18s, 31-12, all-time in the series.

Prior to the 2016-17 season, the National Team Development Program had sent 29 players on to the University of Minnesota. Three former NTDP players are now with the Golden Gophers: defensemen Jack Glover, Ryan Lindgren and Ryan Collins.

Currently, two players playing for the U18s are committed to play college hockey at the University of Minnesota: Nate Knoepke (Farmington, Minn.) and Scott Reedy (Prior Lake, Minn.).

MINNESOTA ELITE LEAGUE FACEOFF: Team USA has been playing games against teams from the Minnesota Elite League since the 2013-14 season. In 2015, the U.S. National Under-17 traveled to New Hope Ice Arena for two games against Minnesota Elite League sqauds, a 5-1 win on Oct. 10 and a 5-2 victory on Oct. 11. Michael Pastujov (Bradenton, Fla.) recorded three goals in the series, while Josh Norris (Oxford, Mich.), Randy Hernandez (Miami, Fla.) and Evan Barratt (Bristol, Pa.) each contributed three points during the series.

Prior to playing the Crimson on Saturday, the Under-18 Team fell to second-ranked Boston University at Agganis Arena, 8-2, on Thursday night. Jacob Tortora (Victor, N.Y.) and Josh Norris (Oxford, Mich.) added shorthanded breakaway goals for Team USA, while four NTDP alumni on the Terriers roster recorded points for Boston University.

AUSTON MATTHEWS RECORD NIGHT: NTDP alum Auston Matthews (2013-15) had a record night Wednesday in his first National Hockey League appearance. Matthews, the first overall pick of the 2016 NHL Entry Draft, scored four goals for the Toronto Maple Leafs, becoming the first player in NHL modern history (since 1943-44) to do so. 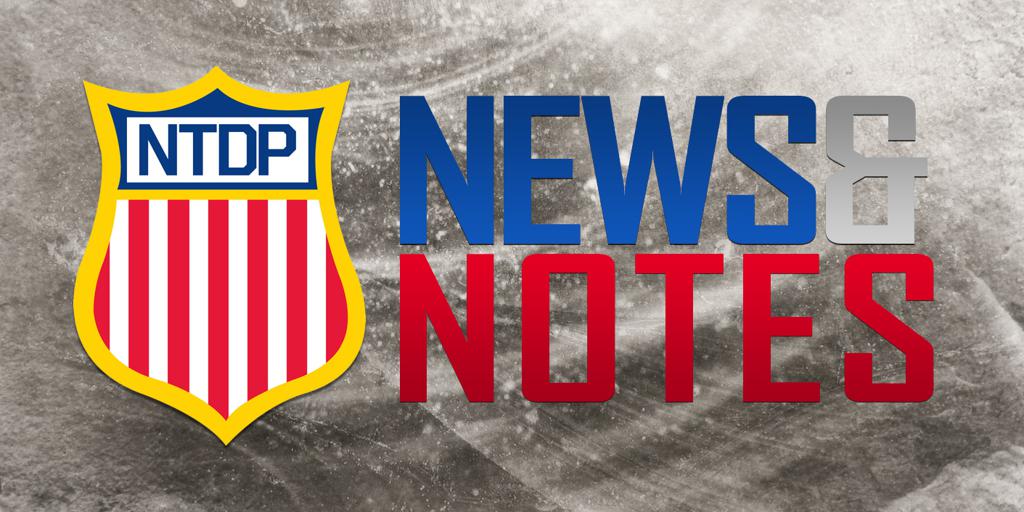