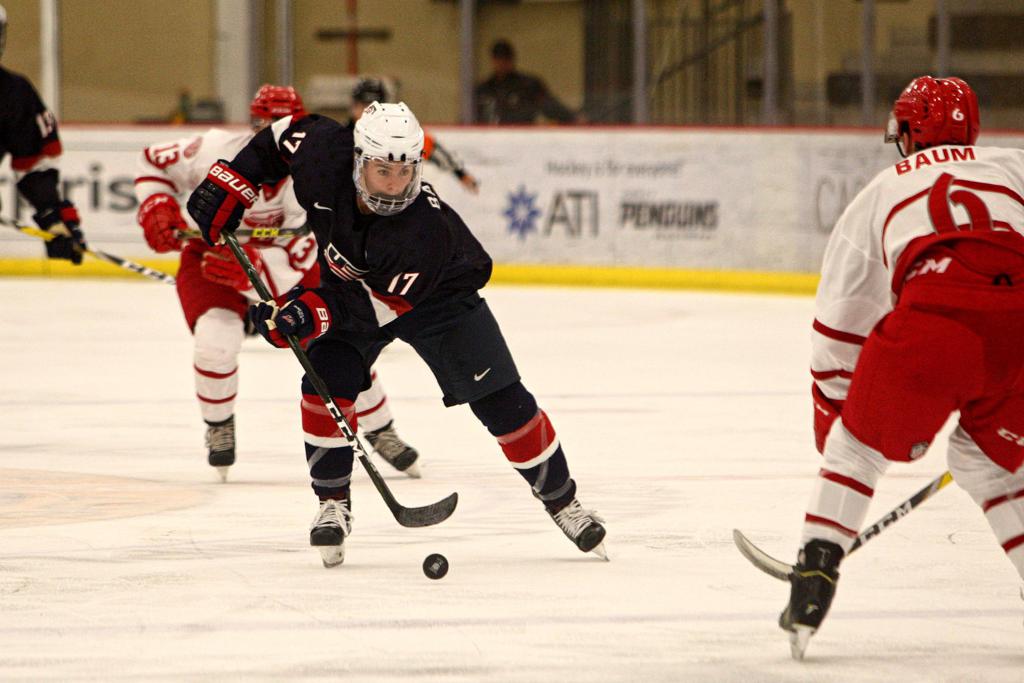 Barratt, playing his first game of the season, tallied a goal in the first period, and one goal, unassisted, in the second period.  He also recorded an assist on the first goal of the game.

Scott Reedy (Prior Lake, Minn.) jumped on a rebound off a shot from Barratt to open the scoring in the game. Grant Mismash (Edina, Minn.) picked up his second assist on the season on the play.

David Farrance (Victor, N.Y.) widened the lead at the 13:55 mark of the first period when he fired a shot from the top of the left circle on the power play. Tommy Miller (West Bloomfield, Mich.) and Reedy picked up assists on the power play goal.

Barratt’s first goal of the game came at 16:08 mark of the first period when he jumped on a rebound off a shot from Randy Hernandez (Miami, Fla.). Graham Slaggert (South Bend, Ind.) also picked up an assist on the play.

Hernandez added another point when he tallied his second goal of the season on the power play at the 15:54 mark of the second period. He fired a shot from right in front of the net on a broken play after Josh Norris (Oxford, Mich.) fired a slap pass through the slot. Brady Tkachuk (St. Louis, Mo.) also recorded an assist on the play.

Barratt added his second goal of the night with just 35 seconds remaining in the 2nd period when he fired a wrist shot from between the faceoff circles and past the outstretched blocker of Robinson.

Mishmash widened the lead to five after receiving a seam pass from Reedy and burying a breakaway goal to the top left corner of the net.

Norris added another goal after a feed across the slot from Quinn Hughes (Orlando, Fla.) at 9:19 of the third period. Tkachuk picked up his second assist of the game after feeding Hughes a pass from the left corner of the offensive zone.

Sean Dhooghe (Aurora, Ill.) picked up the last goal for the U18 team when he tallied a short handed goal at the 18:52 mark of the third period. Graham Slaggert (South Bend, Ind.) picked up an assist on the play.

The U18 squad concludes their participating in the USHL Fall Classic East tomorrow at 7 p.m. when they take on the Youngstown Phantoms at UPMC Lemieux Sports Complex. Follow along on FastHockey.com

Wilmer tried other sports growing up, but the competition and speed of hockey won out

Hockey, Not Figure Skating, Worked Out for Roman Schmidt