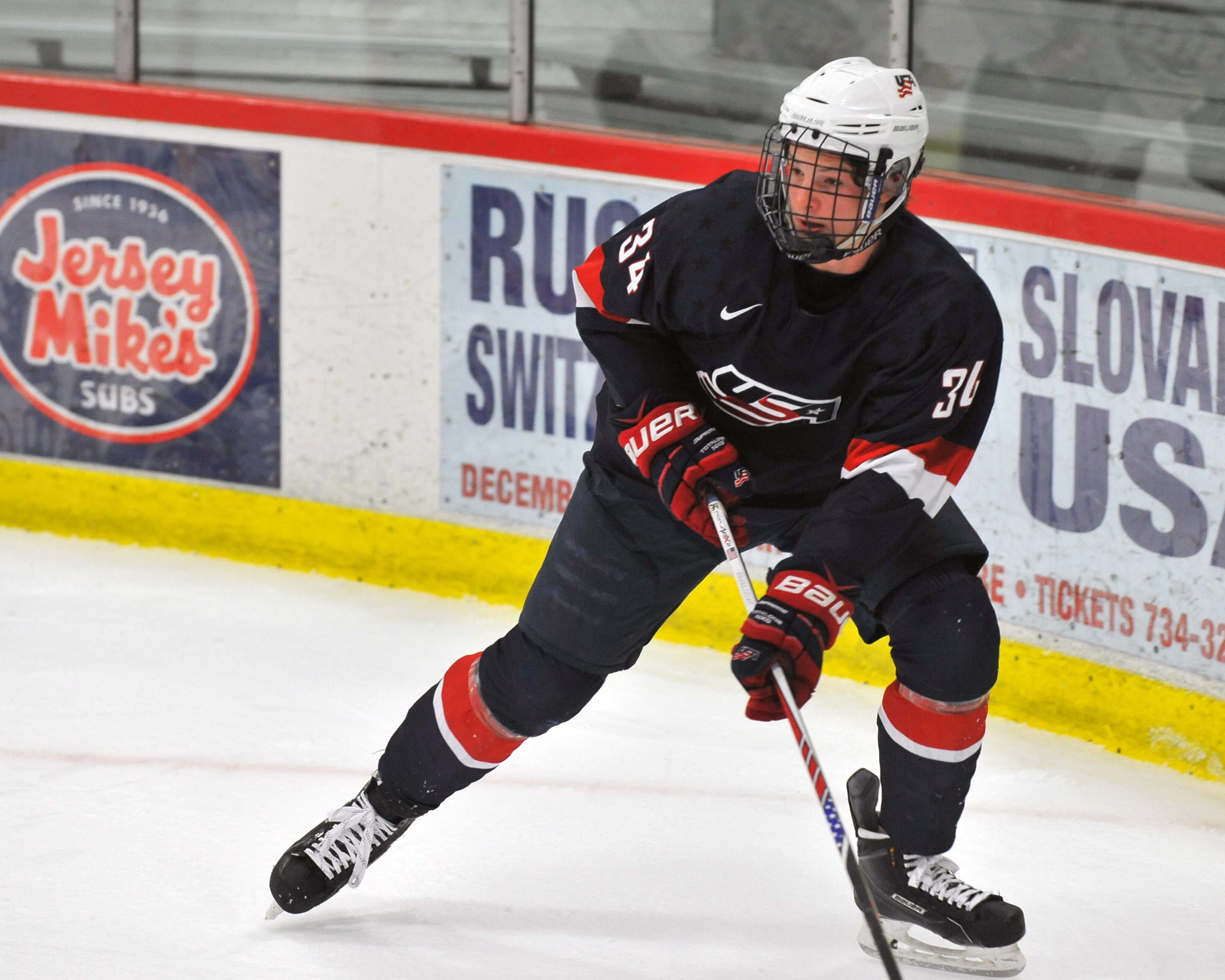 If anyone was keeping score in the Frederic household this season, Trent Frederic ended the season series with a 2-0 advantage over his older brother Grant.

“It was cool, but it felt like any other game except my family was there,” said Trent, a forward from St. Louis. “When I got to go out there against him, I always tried to hit him or get under his skin. I did get some hits on him, but I don’t know if it worked.”

Trent scored the game-winner in a 4-3 overtime victory on Jan. 3 at the Ann Arbor Ice Cube and added a helper in a 5-4 extra session win in the first game one day earlier.

“It was fun though,” he said. “We beat them twice. I definitely have bragging rights this summer.”

Sibling rivalry aside, Grant has been a guiding force for Trent this season.

“We pretty much text every day and FaceTime too,” said Trent, who is three years younger than Grant. “He doesn’t go to school, so he has a little more free time.”

Unsurprisingly, the Frederic brothers began their hockey careers playing against each other in the family basement.

“We played shinny in our basement,” Trent said. “He was three years older and we would fight a lot. It’s pretty competitive. He would always make me play goalie. I wouldn’t let him score. Playing in the basement made it more competitive. You wanted to play real games.”

The entire Frederic family is very sports-minded. In addition to the hockey-playing brothers, older sister K.C. played volleyball at Oregon State University and older brother Gene played football at the University of Memphis. It was common for a “friendly match” to break out amongst the siblings.

“We would go to Florida and go to the beach, and we would play a whole family football game. Those are pretty competitive,” Trent said. “Everyone would end up in a fight at the end if they lost.”

That competitive edge led Trent to playing football, baseball and hockey growing up.

“This year was the first year I only played one sport,” he said. “In baseball, I was a catcher and played in the outfield. In football, I played quarterback the last two years and also played cornerback or safety. Being a quarterback in football, you can be a leader and passing wise, you can see other things develop.”

“It made me more athletic, which is huge for hockey,” he said. “It got me off the ice a little bit so I could develop other areas of the body. It really helped changed it up.”

After playing in the St. Louis Blues midget minor program, Frederic jumped at the opportunity to develop his game further with the National Team Development Program. It was tough for Frederic to leave his family and friends back home in St. Louis, but he said it helped to have some former and current teammates in Ann Arbor.

“It really helped [with the transition] having two teammates from back home — Luke Martin and Joseph Woll, and the three St. Louis kids [Luke Opilka, Luke Kunin and Matthew Tkachuk] on the U18s,” he said. “You knew they had your back, plus the older guys have already been through it, so you knew you could ask questions.”

For Frederic, who appeared in 55 games and posted five goals and 14 points, wearing the Team USA jersey was an honor.

“It’s the coolest thing you can put on,” he said. “It’s cooler than any team I will play for or have played or will probably play for. That’s for sure.” 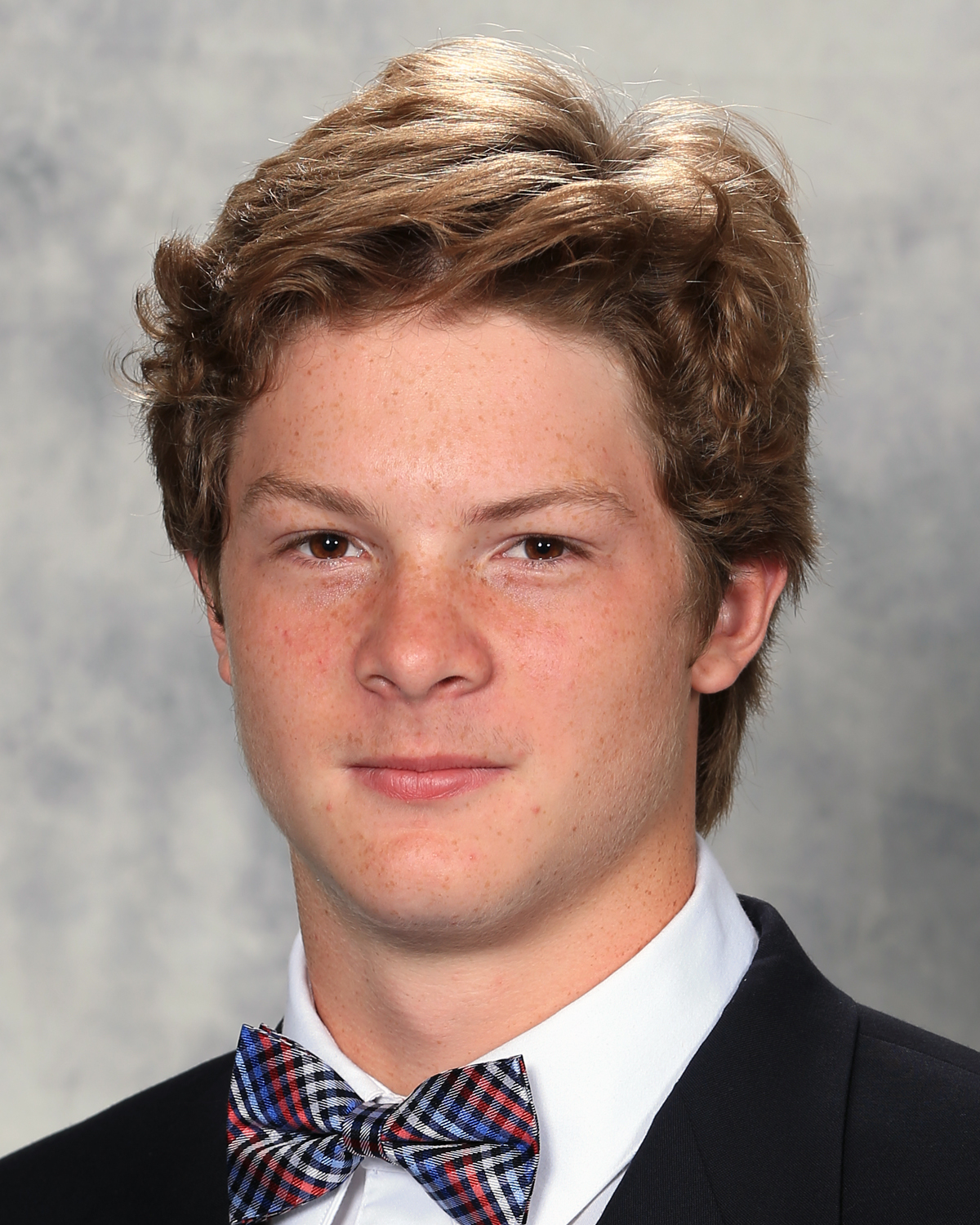