Under-17 Team Fires Past Dubuque in Final Game of Season 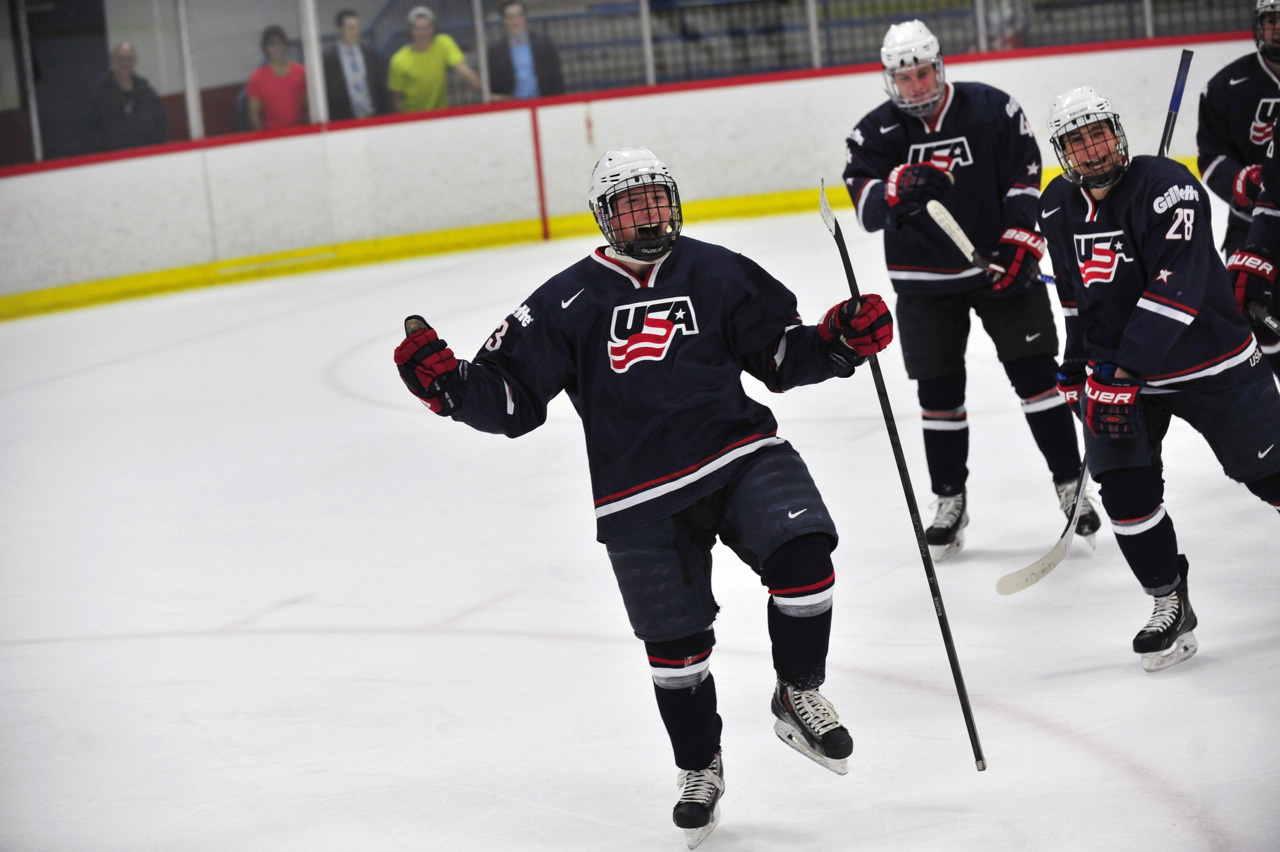 Team USA struck first at the 4:02 mark in the first period. After forcing a turnover at center ice, Fischer skated into the attacking zone, beat the lone defender and wristed it past Fighting Saint netminder Ben Johansson. Dubuque responded with back-to-back goals, one with a man-advantage, to take the lead, 2-1.

Nicholas Boka (Plymouth, Mich.) tied the game at two for Team USA at 10:21 in the second stanza. Nathan Billitier (Spencerport, N.Y.) rifled a shot that bounced off of Johansson. Boka grabbed the rebound mid-air, dropped it and fired the puck from the right face-off circle that found the upper right corner of the cage for the tally. Jordan Greenway (Potsdam, N.Y.) recorded the secondary assist on the play. Just 62 seconds later, Ryan Wagner (Park Ridge, Ill.) notched a breakaway goal to give the U17s a 3-2 lead. Charles McAvoy (Long Beach, N.Y.) fed a pass to Wagner on the right side who backhanded the puck through the five-hole. Caleb Jones (Frisco, Texas) registered the second helper on the play. Team USA further extended their lead at 15:04 after killing off a penalty. Boka found Warren flying out of the penalty box. Warren slipped past a defender and wristed it behind Johansson. Dubuque answered at 17:04 to close the gap, 4-3.

Zach Werenski (Grosse Pointe, Mich.) added to the U.S. lead just 37 seconds into the third period on a wraparound goal. The Fighting Saints climbed within one, but the Under-17 Team responded at 9:37. From behind the net, Jack Roslovic (Columbus, Ohio) threw a pass to Warren on the right half-wall who fired a shot on net. Fischer picked up the rebound, launched a shot, and banged it past Johansson for this second tally of the night. Fischer secured the 7-4 victory for Team USA on a short-handed, empty-net goal to complete the hat trick.

Blake Weyrick (Ojai, Calif.) had 23 saves in the win for Team USA, while Johansson kicked out 37 shots in the loss for Dubuque.

With the win, the U.S. National Under-17 Team finishes the 2013-2014 regular season with an overall record of 31-20-4 (W-L-OTL). The record includes a perfect 12-0 mark versus international competition and all other domestic junior games played this season.

Team USA outshot Dubuque, 44-27 ... The combined record of the U.S. National Under-17 and Under-18 Teams matched a previous best in USHL play. Team USA went 30-25-5, the identical record of the 2010-11 NTDP squads ... Team USA finished tied for fifth with Muskegon in the Eastern Conference, one point behind Green Bay for the final playoff spot ... Team USA's 21 home victories are tied for second most in the league, behind only Waterloo's 23 ... Follow the NTDP on Twitter and Instagram and like us on Facebook ... Download the Sport Ngin Mobile App for Apple iOS and Android devices and follow the U.S. National Under-17 and Under-18 Teams. Fans, parents, athletes, and coaches now have unprecedented access to scores, stats, schedules, photos, and more. The app is free and allows users to track scores and news updates from one team. Those wishing to follow more than one team can make a simple in-app purchase of $1.99. Click here to download the app.